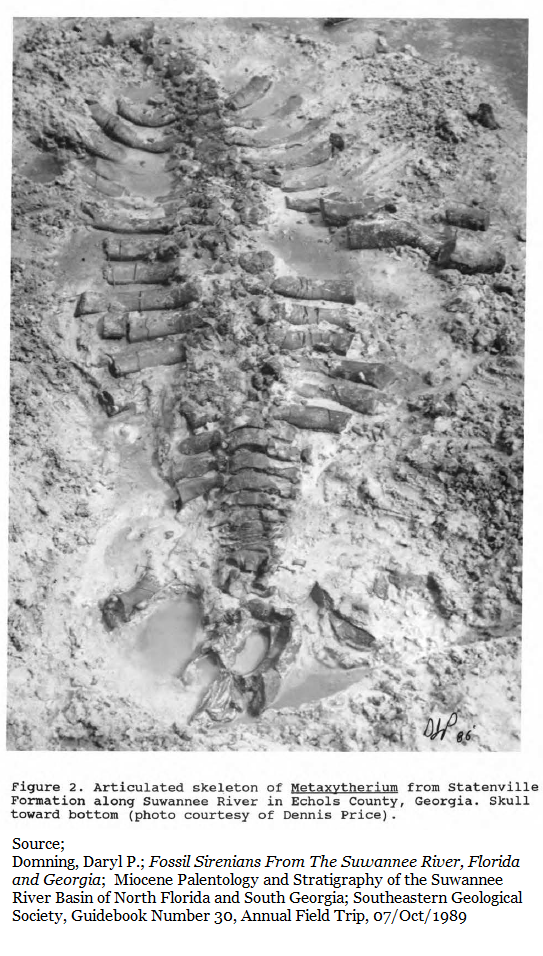 The nearly complete fossil is at least 13.6 million years old. Happily, the fossil was recovered on 05/Oct/1986 by Roger W. Portell, Gary S. Morgan, and W.C. Lancaster of the Florida Museum of Natural History.
I know Roger Portell and think very highly of him. I’ve been in the field with him and he’s assisted or advised me many times as this website has grown.

The collection site is about 35.4 km (22 miles) east-southeast of Statenville, 14.25 km (9 miles) southwest of Fargo, 8km Southeast of Needmore, and about a kilometer (.6 miles) north of the Florida line.
​The discovery was reported in 1989 by Daryl P. Domning of Howard University in Washington DC. (1) Domning is one of the nation’s leading experts on the evolution of sirens; dugongs and manatees.

In a 09/December/2022 email Daryl Domning reported his notes that the Georgia dugong fossil is housed at the Florida museum in Gainesville as specimen # UF 102699. 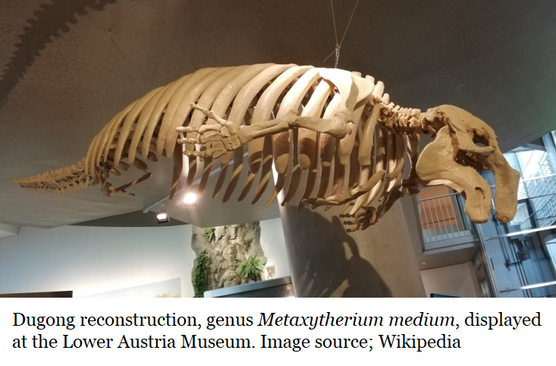 While important Georgia fossils properly belong in Georgia, all the scientifically significant fossil that I’ve been involved with were rejected by every Georgia museum, for assorted reasons. At least twice the reason was my amateur status. Furthermore, at least three prominent Georgia natural history or science museums have “lost” scientifically important Georgia fossil collections. Lastly, I’m aware of at least one university natural history museum, in operation for years, which hasn’t even cataloged their collection.
Today I refer important specimens to the Florida Museum of Natural History in Gainesville where they are building an impressive collection of Southeastern fossils.

In that same December email Domning estimated the length of the living dugong at 3 meters. He further commented; “I recall that it was included in a manuscript that I never completed, and I don’t think anyone else has worked on it since.”

As of this writing (11/Dec/2022), the Dugong paper is not listed on the Resource page of the Paleontology Association of Georgia (PAG) though I suspect it soon will be.

The find is listed in the Paleobiology Database (paleobiodb.org) and that’s where I learned of it, Facebook’s Georgia’s Fossils Group assisted in getting a copy of the guide book where it was published.
Dugong vs Manatee
In the online magazine Boat-Safe Chris Riley tells us the differences between a dugong and a manatee. (2) “In 1493, the explorer, Christopher Columbus, wrote in his journal that he has quite clearly seen three ‘mermaids’ rise out of the sea. His issue was that these mermaids weren’t quite as beautiful as folklore seemed to portray them. According to his account, the mermaids he saw had some ‘masculine traits on their faces.’ Turns out, like almost every other sailor in that time, Christopher Columbus understandably mistook either a dugong or a manatee for mermaids.”

The animals Columbus saw were probably as shocked as he was.
Sirens, order Sirenia, are the only marine mammal herbivores and the order includes both dugongs & manatees. Their appearance is similar, they are largish animals which resemble a cow, thus the name sea-cow.

The most notable difference between the two is that dugongs are wholly marine, they are always found in salt water along the coast. Manatees are more flexible, they frequent salt & fresh water. 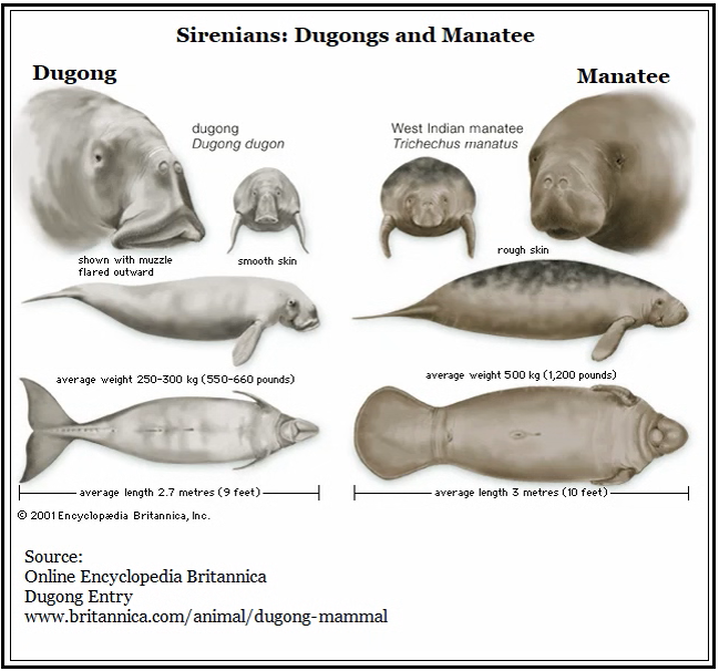 The dugong’s snout is trunk-like and faces downward and has a slit for a mouth. The manatee’s snout is much short and has a split upper lip. Dugongs have a whale-like tail, very similar to a dolphin’s fluke. Male dugongs have short, elephant-like tusks. Manatees do not.
Metaxytherium
The genus Metaxytherium likely emerged during the Middle Oligocene Epoch, roughly 28 million years ago, but where it originated is still a matter of debate. Two basal (basic) species are known from the same time frame but opposite sides of the Atlantic. However, the genus is known to be present in both Florida and South Carolina by the Late Oligocene with the species Metaxytherium  albifontanum. So surely it was also present in Georgia, but vertebrate bearing Oligocene fossil beds are extremely rare in our state. As a genus it is known Africa, Europe, North and South America. The genus endured to the Late Pliocene, or about 3 million years ago. 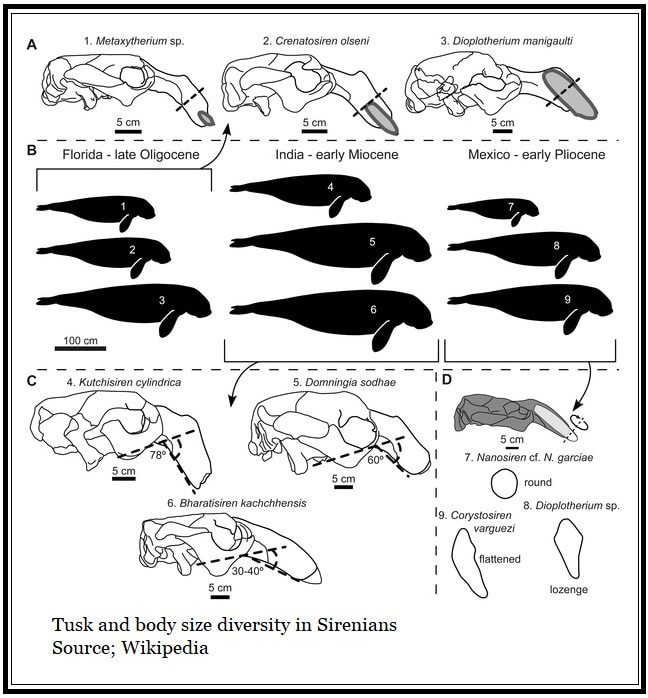 ​Size estimates for Metaxytherium range from about 7 feet long to about 12 feet
Gary S. Morgan Observations
In the same 1986 guidebook Gary Morgan, of the Florida Museum who was part of the recovery team, discusses the Georgia Dugong a bit further.
​
“The sediments in which the sea cow was found consisted of greenish-gray clays and fine phosphatic sands that are tentatively referred to the Statenville Formation. This site contains a sparse fauna of marine vertebrates, along with a partial tooth of a rodent tentatively identified as Copemys, (mouse or rat) species unknown, a small cricetid (vole or hamster) characteristic of the Barstovian.” 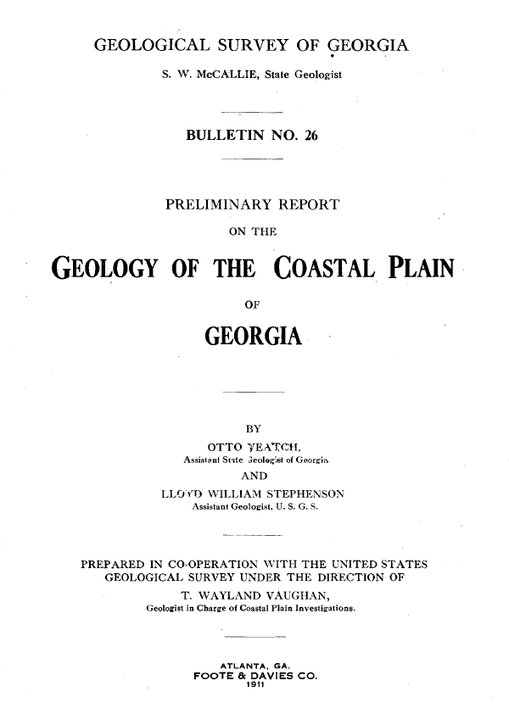 Bony Bluff
1911 Veatch & Stephenson report on local fossils, page 355
“Beneath the railroad bridge at Fargo is a greenish, sandy, fine grained clay which appears about one foot above low water. It is overlain by brown, incoherent, quartz sand, a Pleistocene terrace deposit. The greenish clay probably belongs to the Alum Bluff formation, although it contains no fossils, and its age is inferred from its lithologic appearance.”

“At Bony Bluff, nine miles southwest of Fargo, three feet of gray, compact, calcareous sand probably belonging to the Alum Bluff formation appears at very low water. This sand is full of black, phosphatic pellets from the size of a flax-seed to one-fourth inch in diameter, and also contains large fragments of blackened bones, shark teeth, and poorly preserved prints of shells. The phosphatic sand is overlain by eight to ten feet of brown and white sand of Pleistocene age. Large fragments of silicified wood not in place occur, but they probably came from the base of the Pleistocene sand. (Hank Josey & Kyle Keller has both reported petrified wood from the general area.) Similar phosphatic sand was found at ‘The Rocks’ or ‘Rocky Ford,’ five (river?) miles below Bony Bluff, and one-half mile above the Georgia-Florida State line. The bluff of the river at this point is 12 feet high at low water. The rock is in the bed of the river, but when the water is very low about one foot of it is exposed. It is a buff-colored sand, compacted by calcium carbonate; it is slightly more indurated than that at Bony Bluff and contains nodules of stone harder than the matrix, which appear to be due to segregations of calcium carbonate. Bones and prints of shells are abundant; two species of Pectens, an oyster, and a number of obscure casts occur. Dr. Vaughan has identified Pecten madisonius from this locality, and states that, although the formation here is provisionally classed as Oligocene, it may be Miocene.”

Bear in mind that the Florida research team report the Dugong was recovered 9 miles south of Fargo, Georgia. Gary Morgan reported “The sediments in which the sea cow was found consisted of greenish-gray clays and fine phosphatic sands”

The 1911 researchers visited the same general area and they also observed “greenish clay” though they report that it contained no fossils. They saw ample “black” vertebrate material in sands lower in the stratigraphy.
Further Exploration is Needed
A great deal of paleontology needs to be done in South Georgia, fossils are regularly found by amateurs which are poorly understood by the professionals. It would seem to the author that there are many opportunities for vertebrate, invertebrate, and botany specialist in paleontology to publish research papers and establish careers. We don’t even have scientific consensus on the age of the very popular Withlacoochee River coral. There are Miocene, and possibly Pliocene fossil beds which have not been professionally explored in decades.

My notes on this specimen include the following. That Metaxytherium skeleton is held at the Florida State Museum in Gainesville as specimen No. UF 102699. It was collected in Echols County, Georgia, on the NW bank of the Suwannee River at 30⁰ 36’ 30” N, 82⁰ 41’ W, about 1 km N of the Florida state line, in the Fargo SW 7.5’ Quadrangle (1955). It was discovered by Harlan and Dennis Price, and collected on 5 Oct. 1986 by G. S. Morgan, R. W. Portell, and W. Lancaster. I don’t know if the Prices helped collect it or not.

I recall that it was included in a manuscript that I never completed, and I don’t think anyone else has worked on it since. I don’t believe I have worked on any other Georgia fossils.

As for size estimates for Metaxytherium calvertense, I don’t know of any published estimates, but I would guess the animal measured around 3 meters in length.

I hope this is helpful.