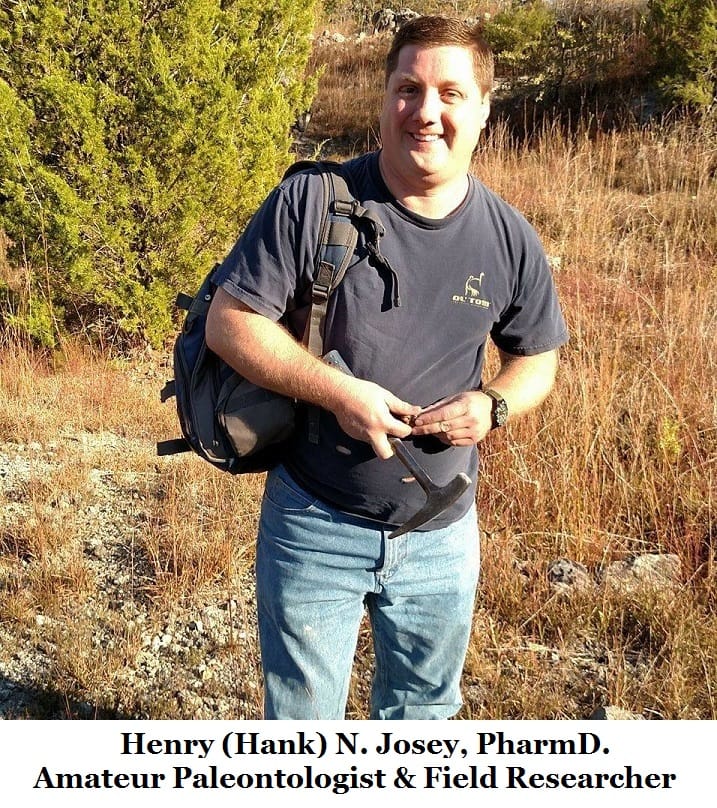 Roughly one and a half miles north of the town of Montezuma, Georgia, there lies a series of hills known as Montezuma Bluffs. Here, the Flint River washes against the rocks of the Clayton Formation, part of the Midway Group and the oldest Cenozoic sediments in Georgia. The Clayton Formation overlies the Providence Sand, and there is an unconformity between the strata, a gap of some 11 million years.
The Providence Sand is dated to Late Cretaceous, Maastrictian stage, 70 million years old and the Clayton is dated to Early Paleocene, Danian stage, 61 million years old. The Clayton Formation represents a shallow marine environment and consists of layers of both fossiliferous sandy and white, massive limestone.

Veatch and Stephenson recorded this locality in 1911 and described a fossil turtle found in the formation, Agomphus oxysternum (see Section 8A: the Georgia Turtle). They mistakenly believed the deposits were Eocene in age. Cooke described the locality again in 1943 and assigned it an age of Paleocene. The Clayton Formation occurs in band from western Georgia, curving west and north across lower Alabama and up into northeast Mississippi , western Tennessee and western Kentucky, then turning southwest through southeast Missouri and across Arkansas. 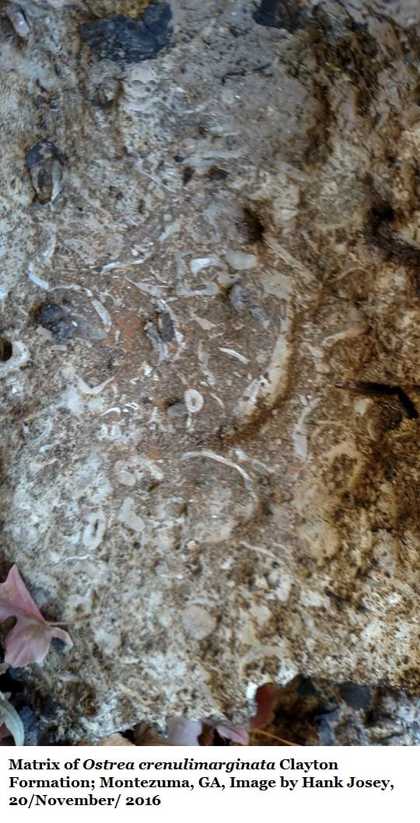 In the spring and fall of 2016, the author made three trips to Montezuma Bluffs to observe the formation and collect fossils. The index fossil, Ostrea crenulimarginata, is found in reefs at this location, in some cases being the only fossil found. The limestone at this locality has undergone considerable leaching (the calcitic shell of Ostrea is more resistant to leaching than aragonitic shells so these fossils survive). In the lowermost beds, the limestone consists almost entirely of a shell hash of broken O. crenulimarginata pieces. The author notes a definite stratification in the size of O. crenulimarginata fossils found at this location, with whole specimens in the lower beds average 2 – 3cm in size and specimens in the upper beds reaching 8 – 10cm and a much greater number of them intact. 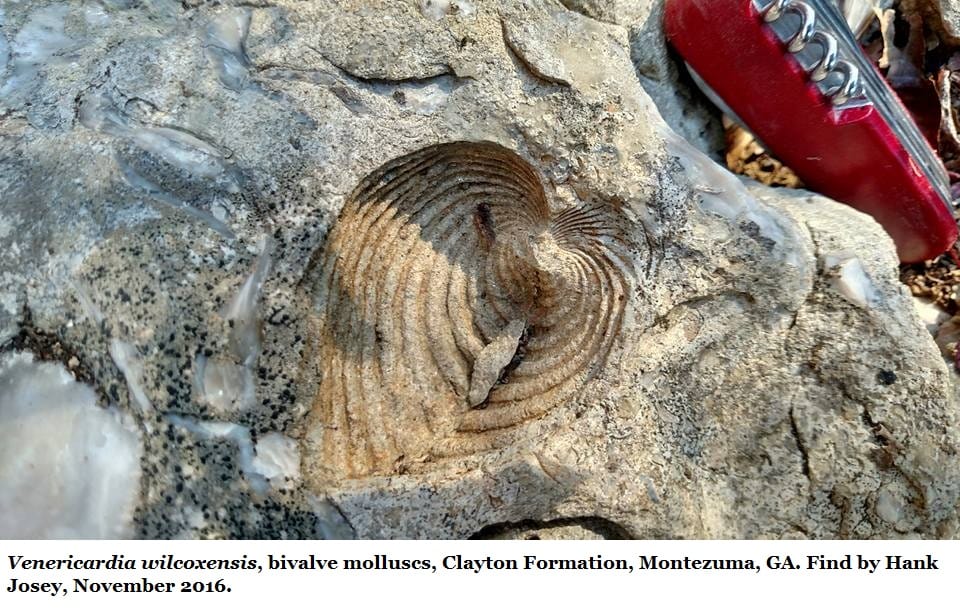 Other fossils observed by the author include Venericardia wilcoxensis, several other Venericardia species, Turritella alabamiensis, and a fossilized tooth of Lamna cuspidata. In an analysis of Clayton Formation fossils found in southern Illinois, 93% of the fauna came from a group of one bryozoan, seven mollusk, and one shark species. The four species listed above plus O. crenulimarginata are all included in that group. This low diversity of species is typical of the fauna following a mass extinction event such as the one that occurred at the end of the Cretaceous. 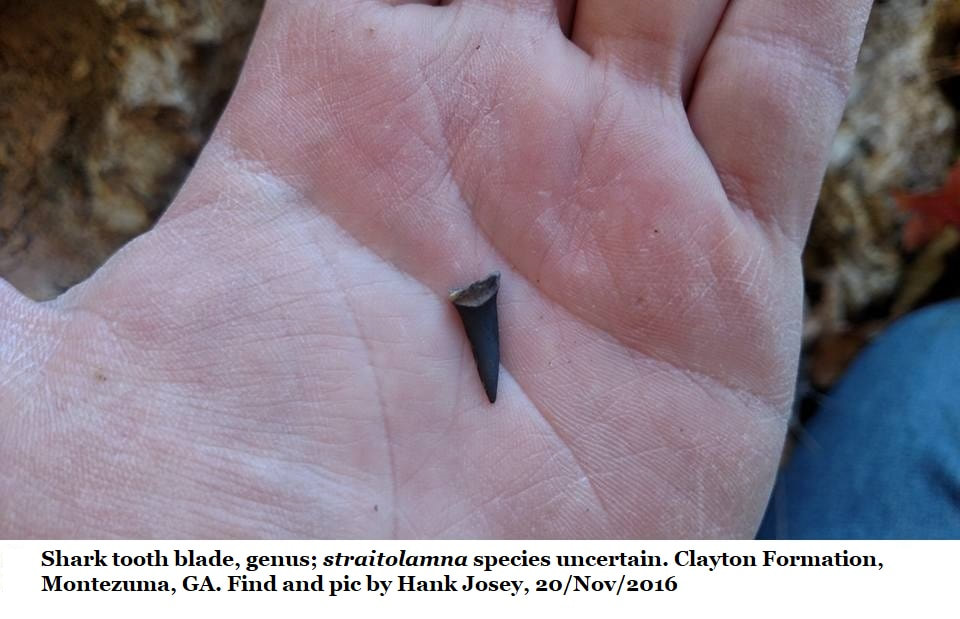 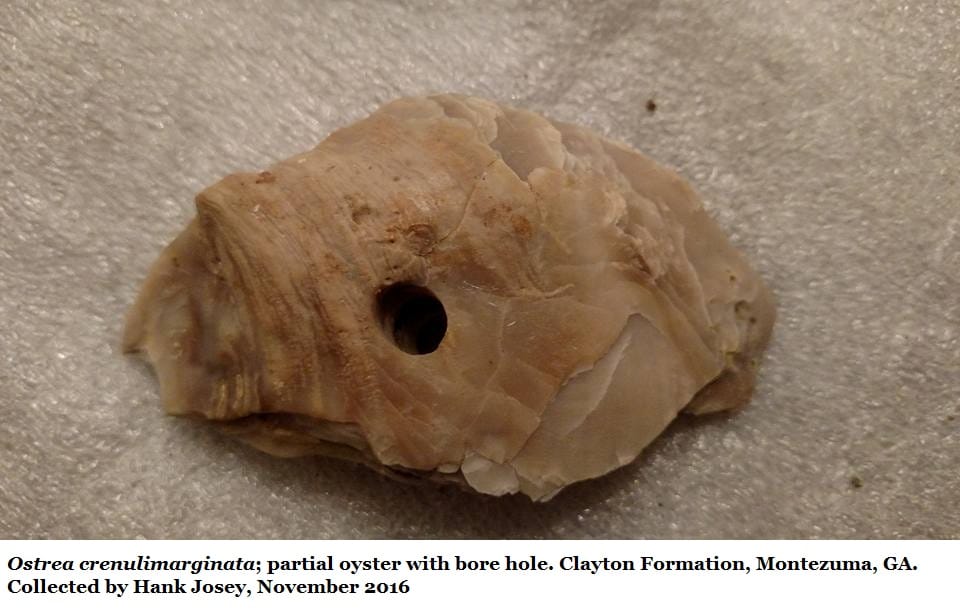 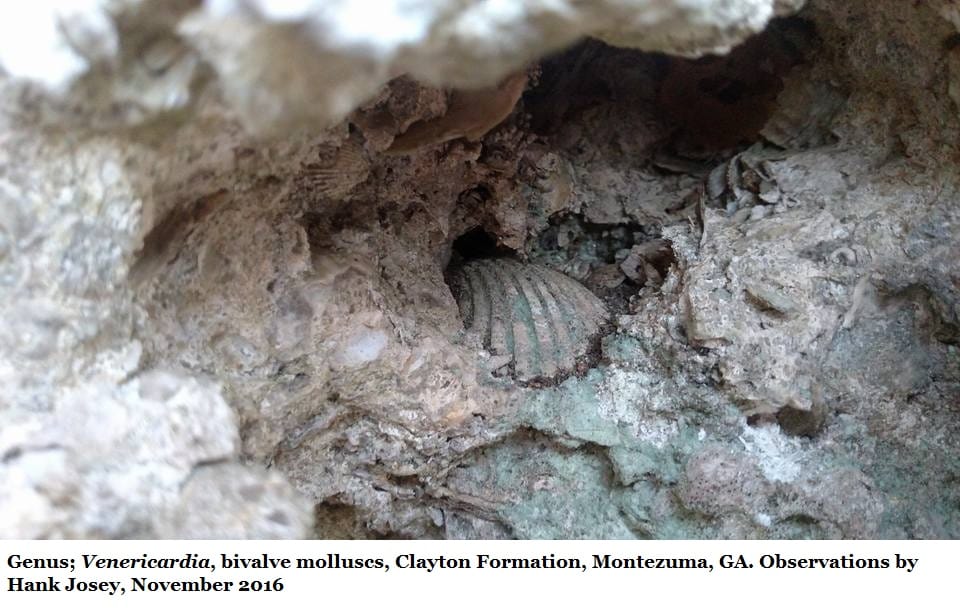 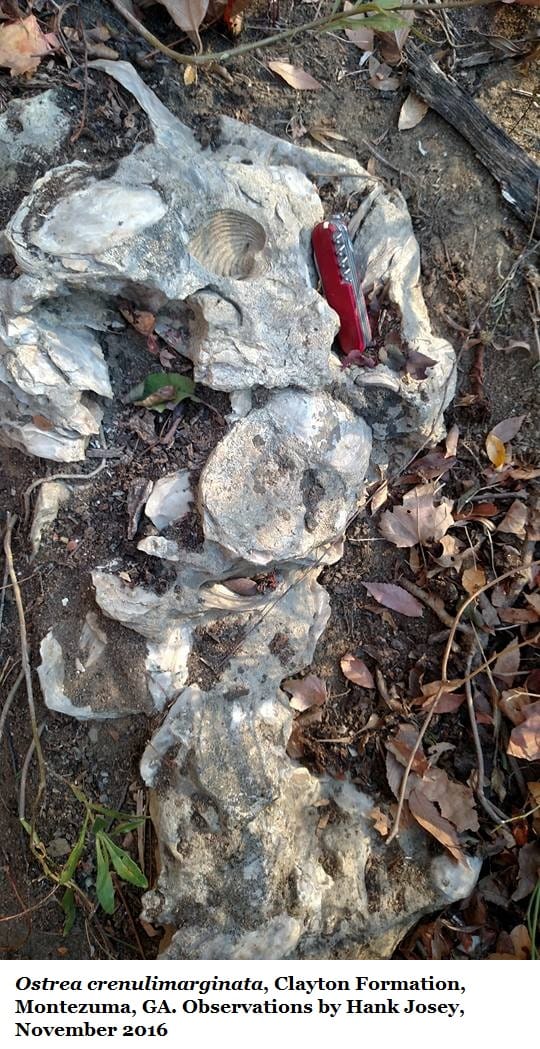 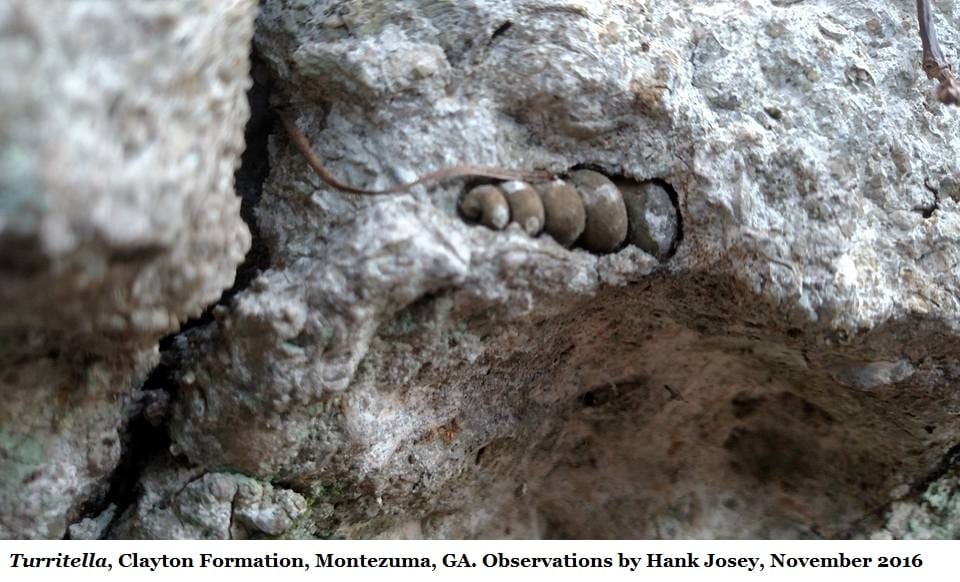 Cope, K. H. and et al. The Fauna of the Clayton Formation (Paleocene, Danian) of southern Illinois: a case of K/P survivorship and Danian Recovery. Bulletin of the Mizunami Fossil Museum. No. 23, 2005.

Richards, H. G. Illustrated Fossils of the Georgia Coastal Plain. Reprinted by the Georgia Department of Mine, Mining, and Geology from Georgia Mineral Newsletters.
​
Veatch, O. and Stephenson, L. W. Preliminary Report on the Geology of the Coastal Plain of Georgia. Geological Survey of Georgia Bulletin No. 26. Foote & Davies Co.: Atlanta, GA. 1911.