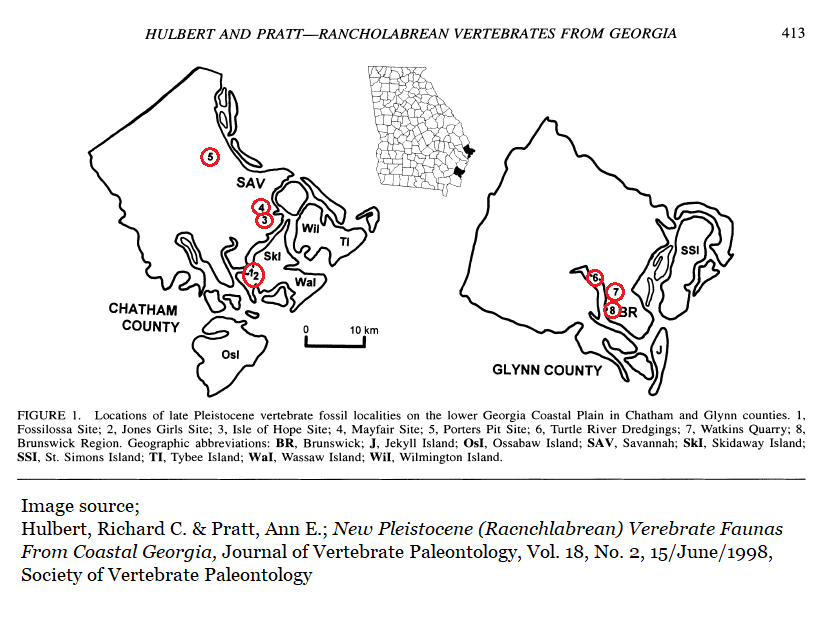 In 1998 Richard Hulbert and Ann Pratt published a report on vertebrates they’d found during research on Coastal Georgia. Both were at Georgia Southern in Statesboro at the time. The list of Georgia’s coastal vertebrates, and our knowledge about the environments which they knew in life has grown a bit since 1998, thanks in large part to this foundation work. We need to look at it in detail.

Both Richard Hulbert and Ann Pratt later left Georgia for other opportunities. My understanding is that Ann Pratt left paleontology decades ago, got married and moved to South Florida. I hope her life has prospered.

Richard Hulbert went to the Florida Museum of Natural History (University of Florida) in Gainesville where he stood as Vertebrate Paleontology Collections Manager until his recent retirement. But he’ll tell that he’s still working nearly daily in the museum’s auxiliary warehouse. That’s an interesting fact for many paleontologist, their love of knowledge and the geo sciences is so deep that they spend a career with fossils, then retire to continue their studies in fossils.

But the fossils Hulbert & Pratt reported in 1998 are still held in Georgia Southerns research collections.

Accessibility
Neither the Porters Pit nor Mayfair sites were still accessible at the time of the 1998 publication.

At that time the Isle of Hope site was located on both sides of a sharp, tidal channel meander, through the salt marsh that separates the Isle of Hope from the mainland. Many specimens from the Isle of Hope were discovered and collected during the construction of a boat pier on the outer bank of the meander or directly from the channel during exceptionally low tides. At completion of the pier the exposed sediments were covered with rip rap to prevent erosion.

The Jones Girls site is located in two shallow ponds excavated in 1995 and 1996 on the southwestern edge of Skidaway. Vertebrate fossils are uncommon though it produced a diverse, well-preserved estuarine, shallow marine mollusk fauna. The vertebrate fauna was predominately marine and included cartilaginous fish (sharks & rays), ray finned fish and cetaceans (whale) fossils. Only a rodent heel bone and a snake vertebra represented terrestrial vertebrates. 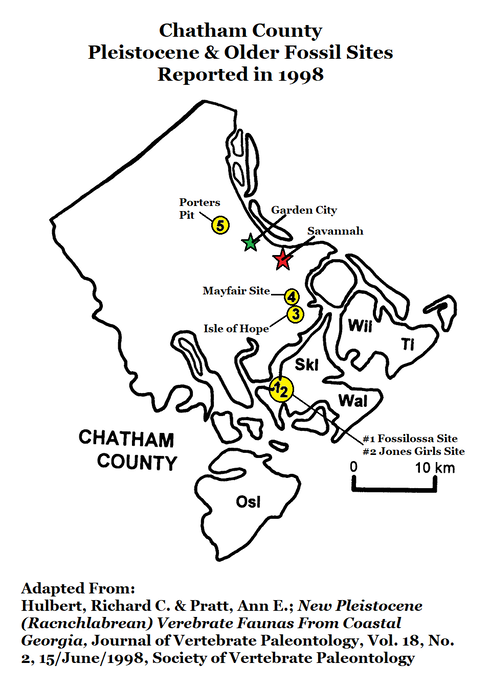 ​Approximate ages & conditions
By marine fossil populations the Isle of Hope, Mayfair, & Jones Girls all represent a coastal, shallow water, barrier island environment on the continental shelf influenced by the Savannah River draining into the Atlantic. The less common terrestrial vertebrate material was either introduced by Savannah River drainage or tidal action from the Atlantic. In other words, it is entirely possible that river floods and tidal currents exposed and disturbed older fossils while depositing fresh bone and teeth directly on top of them.

Sea levels were near, or perhaps slightly higher, than modern sea levels. Timeline would be the Sangamonian Stage 125,000 to 75,000 years ago (last interglacial or glacial minimum).

The Porters Pit site is different, it is a fluvial channel lag deposit of mixed Miocene, Pliocene and Pleistocene fossils. “Fluvial” mean river related. “Channel lag” means accumulated residual material deposited and left behind in a low spot. So fluvial channel lag mean material was rolled along by river currents until it dropped into a spot where the currents couldn’t reach it. This happened during global low stand of sea levels. The mixed nature of the fossils make it difficult to accurately date. 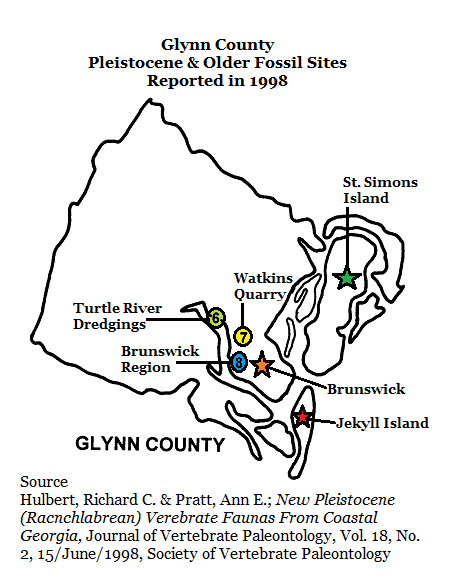 Dating Deposits With Sloths?
Observation by the authors (edited for popular clarity)…
“There is an additional factor which may provide some chronologic information. Eremotherium laurillardi (Giant ground sloth) is the numerically dominant ground sloth in the Savannah region and other coastal sites in Georgia. Florida has a much greater number of Pleistocene vertebrate sites than Georgia, with better chronologic control, thus allowing more precise resolution of the distribution of certain taxa. Eremotherium was common in Florida up through the last interglacial 75,000 years ago, but thereafter became very rare and is generally absent at most sites. Megalonyx (large ground sloth) is the typical latest Pleistocene ground sloth in Florida. Assuming that this was also the case in Georgia, abundant Eremotherium at sites would suggest a minimum age of about 75 ,000 (end of Stage 5) for these localities. 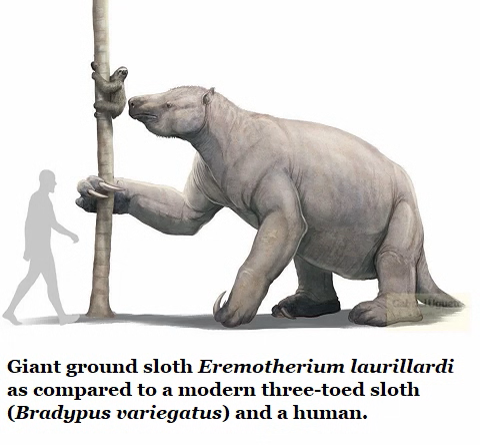 ​Non-Mammalian Pleistocene Vertebrates from Chatham County
Previous to the work by Hulbert & Pratt the published record of Pleistocene fish, amphibians, reptiles, and birds from the Savannah region is very sparse. This was surprising considering their local abundance in modern times and likely reflects a bias in favor of mammals by past investigators.

Prior records include those of unspecified sharks by Hurst in 1957, Henry and Hoyt in 1965, and Markewich in 1992. The description of a new species of box turtle, Terrapene canaliculata, by Hay in 1907 which was overturned by Auffenberg in 1958, Milstead in 1969, and Holman in 1995. (Terrapene canaliculate is now classified as Terrapene Carolina the eastern box turtle.) 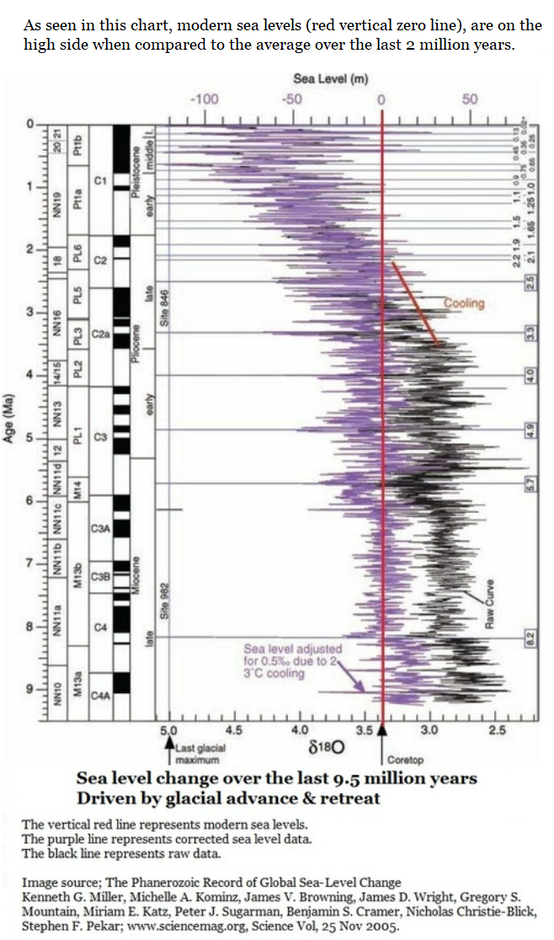 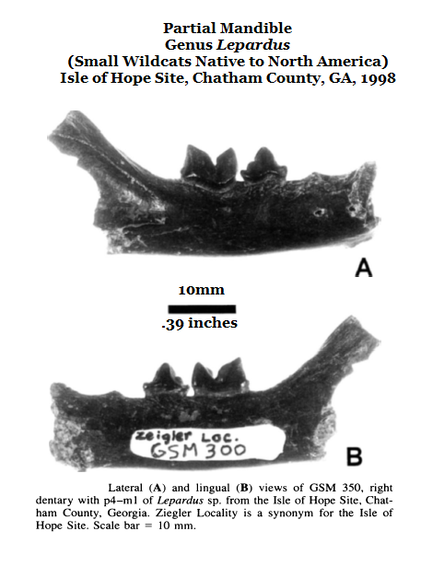 ​Wildcat
A Partial mandible to a smaller wildcat was recovered from the Isle of Hope site. Specimen GSM 300 belongs to a small felid, close in size to the smaller members of the genus Leopardus such as the margay (Leopardus wiedii) and the jaguarundi, (Leopardus yagouaroundi). GSM 300 shares various combinations of character states with each of these, but also differs from each in other features. With the limitations of having but one specimen and no indication of individual variation within the former population, the specific identification of GSM 300 remains un-resolved. 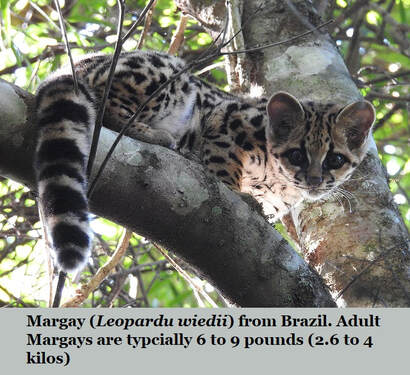 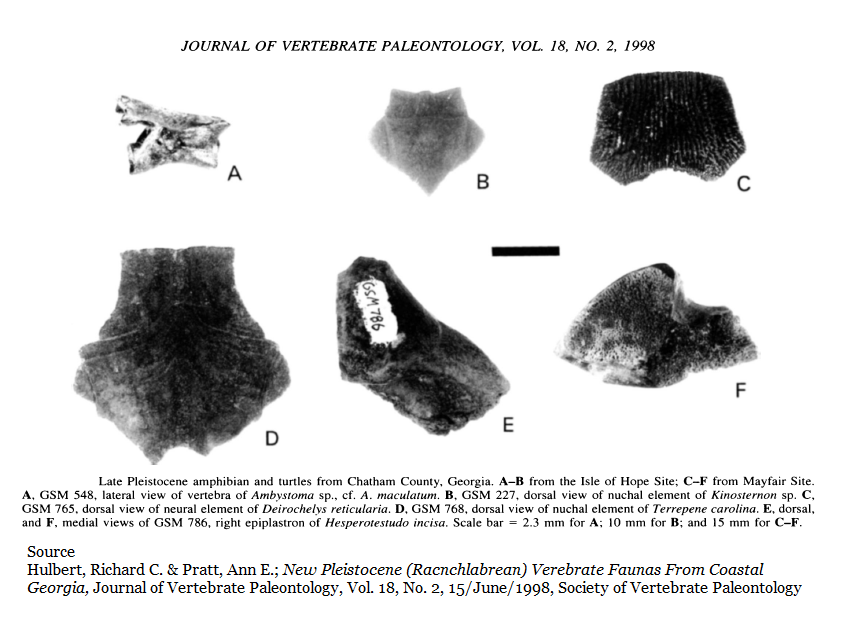 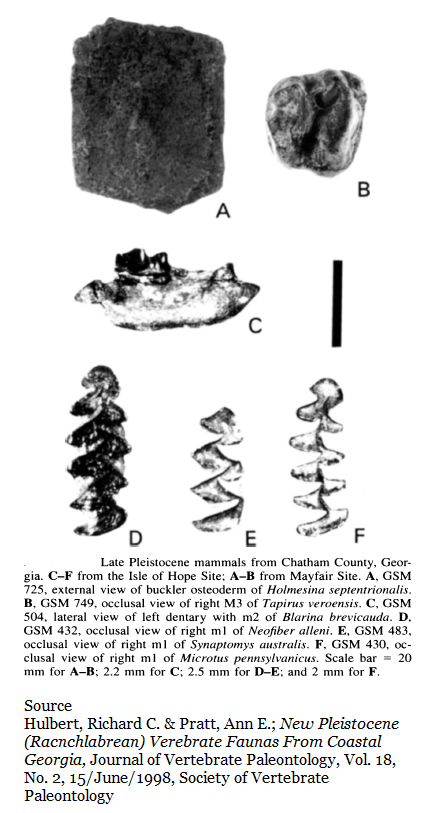 ​Turtle Fossils as Climate Indicators
Turtle carapace and plastron fragments were the most common reptilian fossils observed by Hulbert and Pratt at the Isle of Hope and the Mayfair sites. The carapace is the top of the turtle shell. The plastron is the underside.

In addition to the modern gopher tortoise (Gopherus polyphemus), two extinct species of tortoises were present in the late Pleistocene of the southeastern Coastal Plain, the relatively small Hesperotestudo incisa and the giant Hesperotestudo crassiscutata. All three are apparently present in the Isle of Hope fauna, although H. crassiscutata is only represented by fragmentary specimens. Both the Mayfair and Isle of Hope sites produced specimens of the diagnostic, relatively thick epiplastron of H. incisa. An incomplete plastron element of a large Hesperotestudo was also recovered from the Porters Pit Site. It could represent the Pleistocene H. crassiscutata or the Mio-Pliocene H. hayi. The presence of tortoises at Pleistocene sites is usually considered an indicator of higher winter minimum temperatures than at present. 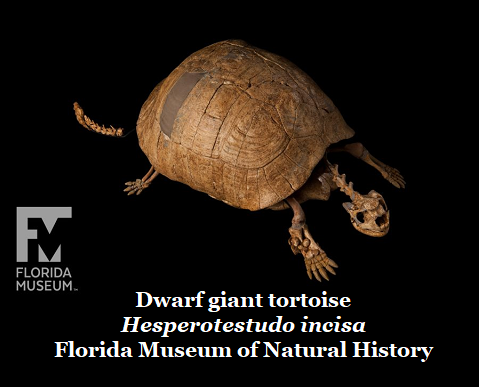 ​Snakes
Nine taxa of snakes have been identified from the Isle of Hope Site on the basis of vertebrae. None are abundant and all are common taxa now living in coastal Georgia. Four vertebrae are from Agkistrodon piscivorous (cottonmouth) individuals.The remaining four viperid vertebrae lack these deep pits, and more resemble those of large Crotalus adamanteus (eastern diamondback) but due to their partial nature confirmed identification is impossible.

The snake vertebra from the Jones Girls site belongs to a medium sized natricine snake but is too poorly preserved for more precise identification.
​Birds (Avian)
Avian fossils are relatively rare in our coastal Chatham County Pleistocene sites, with only five specimens representing four taxa. A single specimen, an incomplete coracoid (GSM 612), is known from the Isle of Hope Site. It is from either Anas rubripes (American black duck) or Anas platyrhinchos (mallard) but its fragmentary nature prevents more exact identification. The remaining bird fossils are from the Mayfair Site and represent  a Meleagris gallopavo (wild turkey), a of Cygnus columbianus (tundra swan), and two coracoids of Anas americana (American wigeon). All of these bird are known today from coastal Georgia. 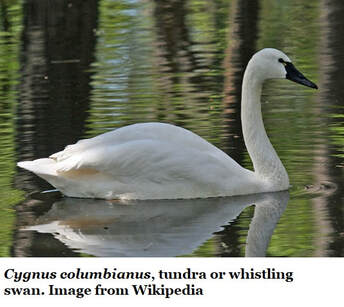 The Isle of Hope site includes 10 taxa that became extinct by the end of the Pleistocene in North America; Eremotherium laurillardi (giant ground sloth), Paramylodon harlani (large ground sloth), Dasypus bellus (beautiful armadillo), Tapirus veroensis (vero tapir), Equus sp. (horse), Mylohyus fossilis (long nose peccary), Mammut Americanum (mastodon), Hesperotestudo crassiscutata (southeastern giant tortoise), and Hesperotestudo incisa (dwarf giant tortoise). These provide a minimum age of about 10 to 11 ka for the site. With the exception of the two species of Hesperotestudo, the remainder of the herpetofauna and the entire ichthyofauna all belong to extant taxa and do not directly provide any chronologic information other than suggesting a relatively young (Quaternary) age. 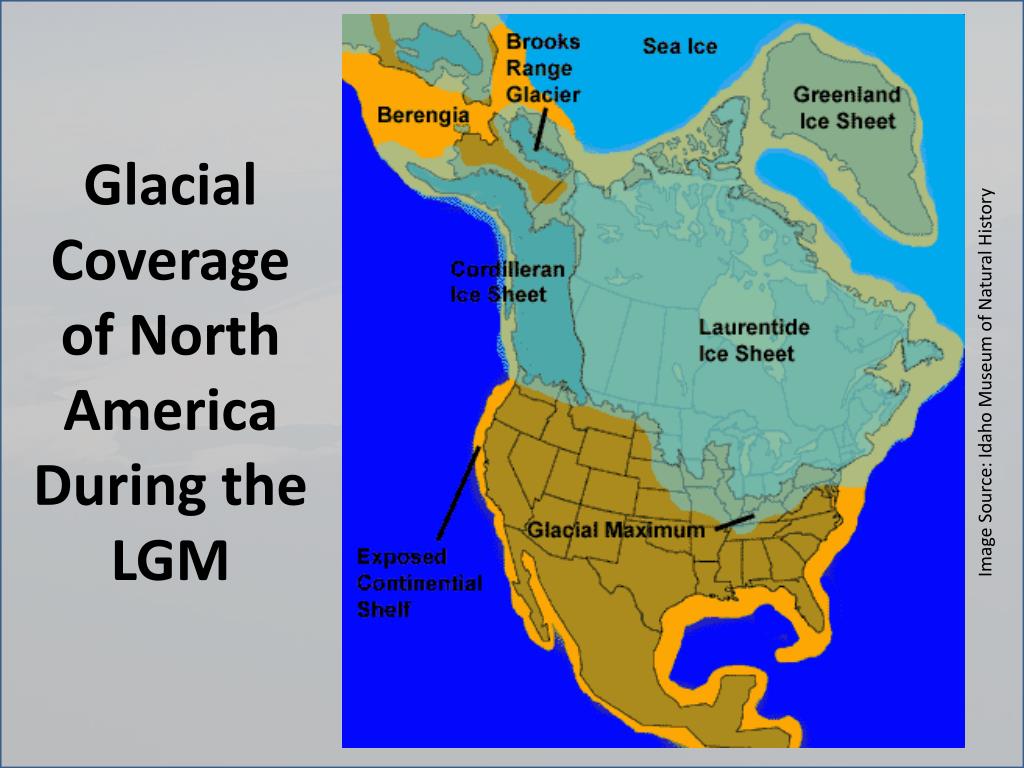 ​Many of the species present are common and wide-ranging either geographically, chronologically, or both. The absence in any of the Savannah region sites of most of the large mammalian carnivores that must have been present in the area (e.g., Canis, Smilodon, Panthera) remains a mystery. Among the smaller carnivores, the presence of Leopardus is notable, especially as it appears not to be the relatively well-known, latest Pleistocene species L. amnicola. Their morphologic differences may be related to the older geologic age of the Isle of Hope dentary relative to most specimens of L. amnicola, interglacial versus latest Rancholabrean. Alternatively, it may be a true indication that a close relative of Leopardus yagouaroundi was at one time an inhabitant of the southeastern United States, just as there were once ocelots and margays. Only recovery of additional fossils and a better understanding of the evolutionary history of Leopardus will solve this problem. 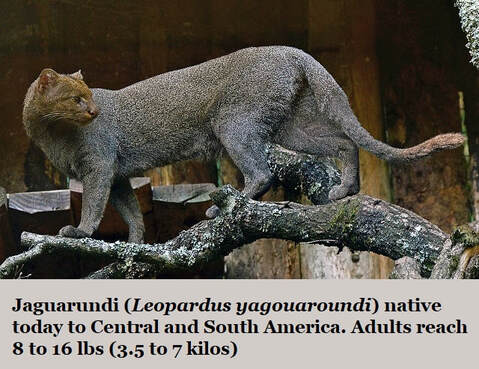 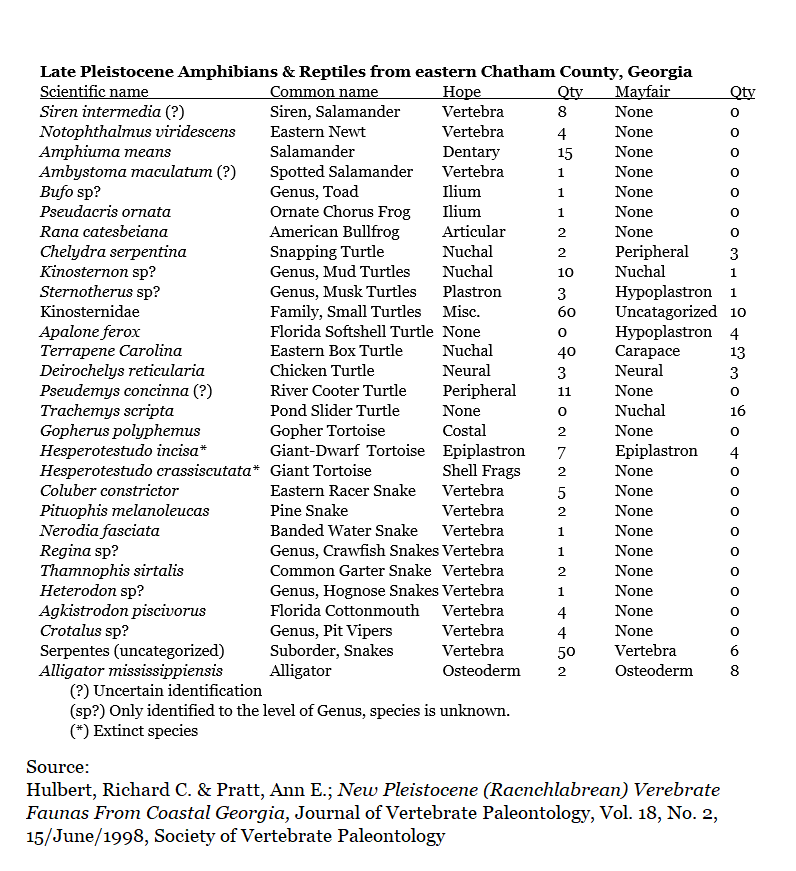 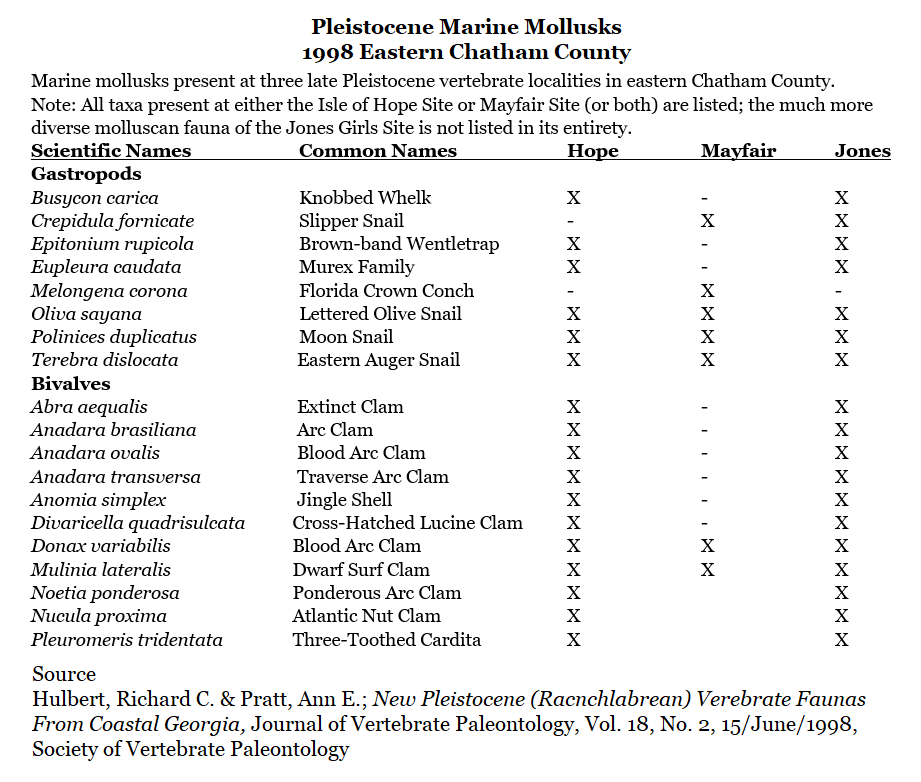 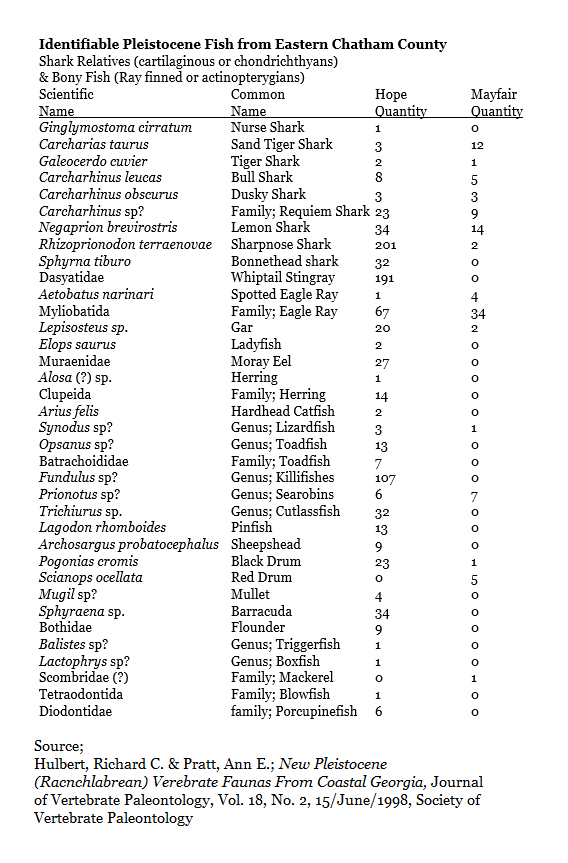 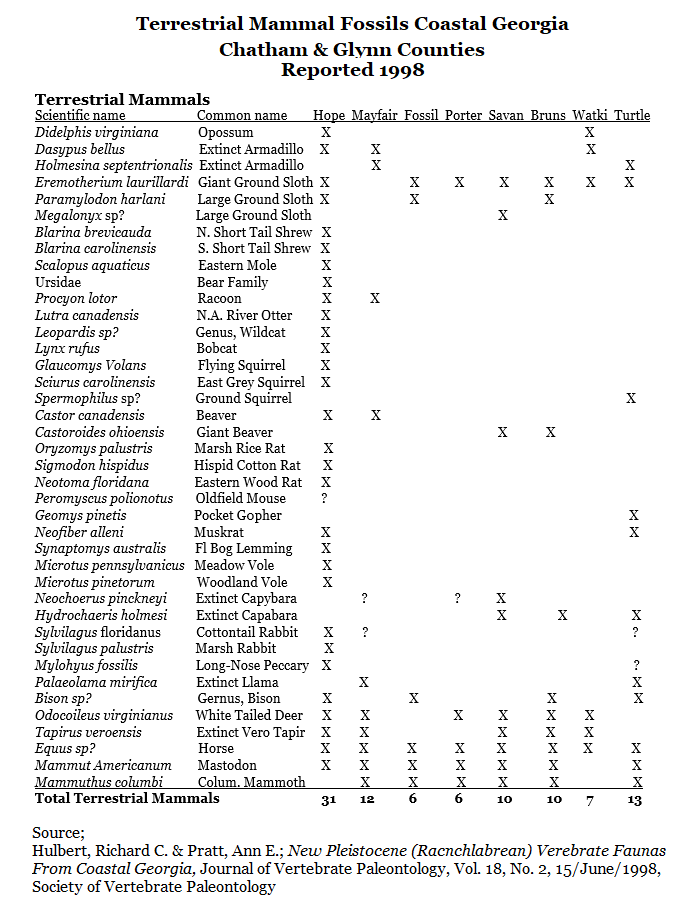 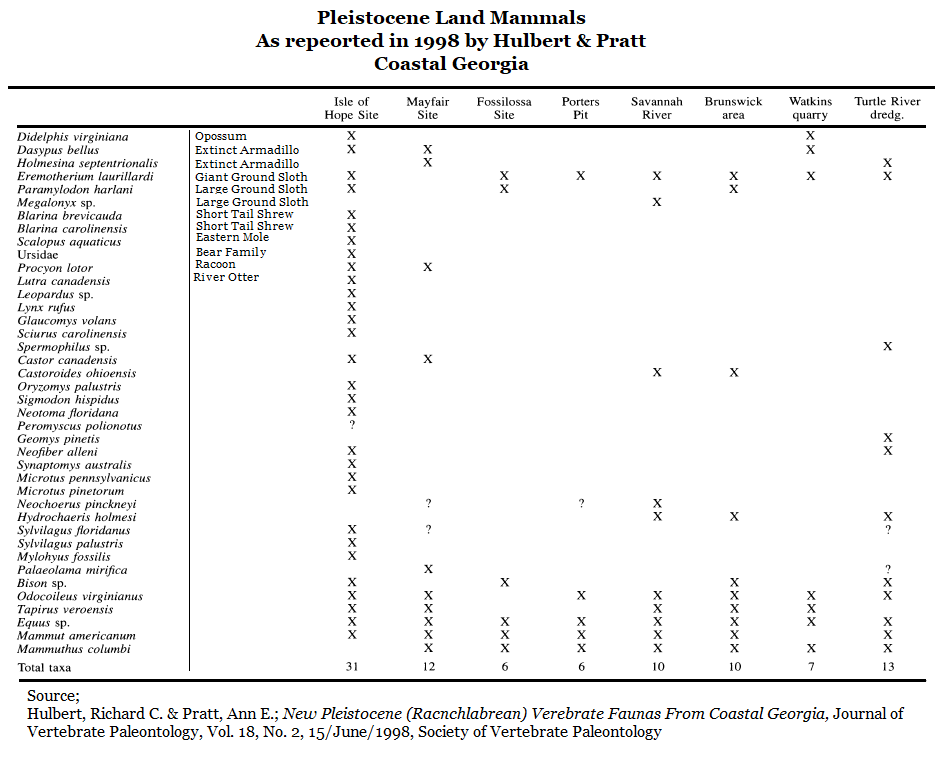