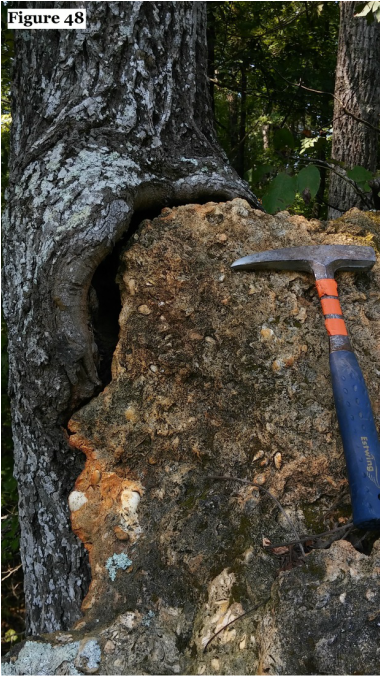 Re-crystallized sea shells, which glitter beautifully in the sun, are common in these deposits but vertebrate fossils are very rare as their populations were still rebounding. Jasper, agate and chalcedony are common; you'll also find iron based minerals such as geothite, limonite, and hematite.

Become a Citizen Scientist and assist in ongoing research by imaging and reporting to the author any sharks teeth or other vertebrate fossils you may find. You will find my email on the Author's Bio page.

Though serious research on these deposits began in 1911, they weren't properly understood until 197o when Sam Pickering published his survey of the area for the Georgia Geologic Survey. Pickering would go on to stand as the Georgia State Geologist from 1972 to 1978.

Details about the formation and research of these deposits can be found at the base of this page, after the tour text, under the heading "Georgia's Heritage of Research".

As the sea-level chart just below shows, global temperatures and coastlines remained restless throughout the Oligocene Epoch. (5)

Enjoy your tour and the beauty of rural Houston County! 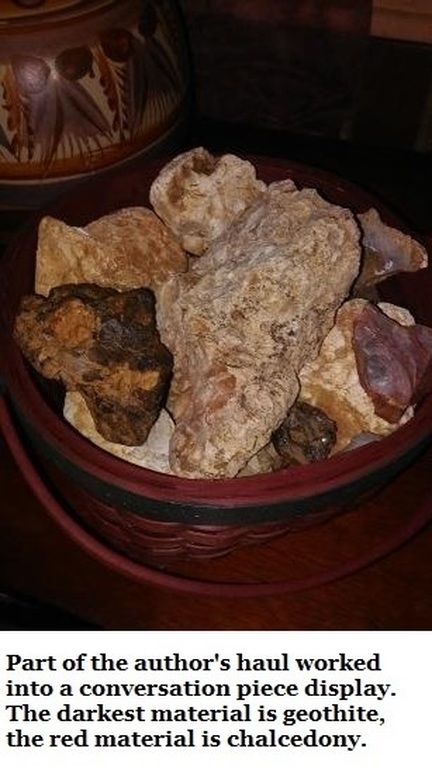 Some species you may find
Sand dollars & sea urchins.​Small members of the clam family
Begin Tour Here.
This tour can be done comfortably in 90 minutes from the time you leave I-75 at Exit 127 to the time you return to I-75 at Exit 135. Take your time, explore, and enjoy.
Please Be Respectful of Private Property.

1: Highway I-75 at Exit 127
​2: Henderson Springs Road, Approximately 3.65 miles long. (This road will be followed to its end on County Line Road.)
A)    From the sharp left turn there’s a drive just over a mile long to the tree line where there is a ditch to observe. Along the way keep a close eye on road-cuts (Figures 14, 15 & 16), as they become highly variable and no real explanation for this is offered in the geologic literature.
B) When Sam Pickering visited in 1969 he noted a drainage ditch with a wealth of fossils. The ditch is still here. It’s nearly overgrown with late summer’s kudzu. Decades of storms and winds have mellowed it. But fossils remain. (Figures 21, 22, & 23) Be respectful of private property. 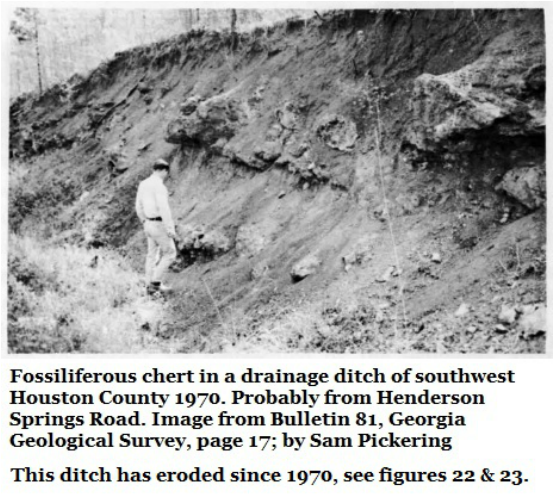 C)   The specimen shown in Figure 25 reveals recrystallization, which means essentially that the silica filled a cavity and coated it. Often these cavities will be tiny geode pockets. 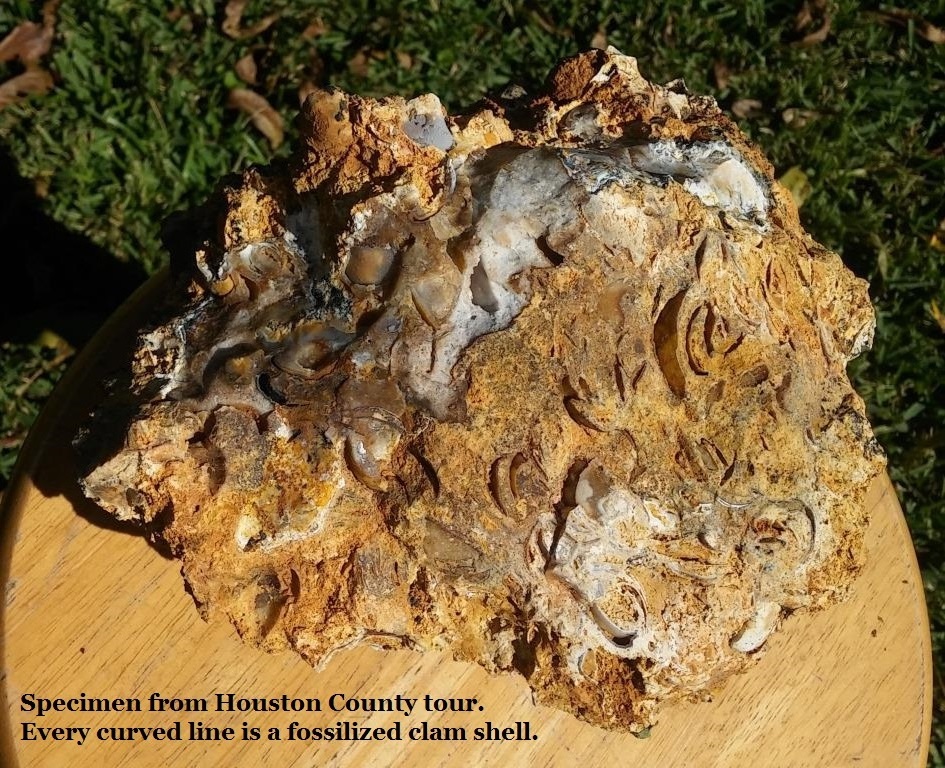 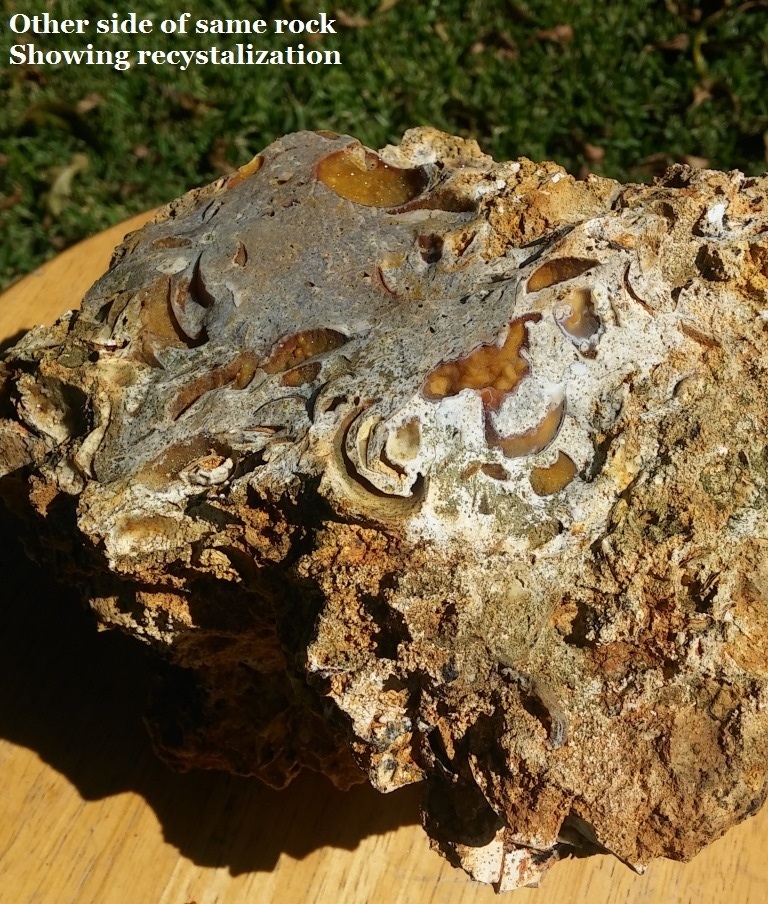 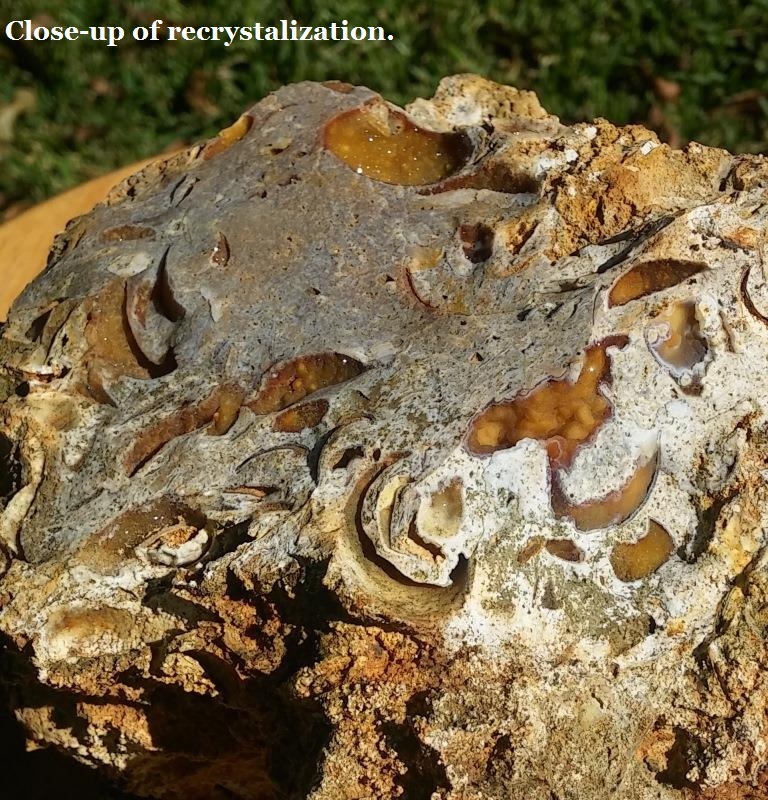 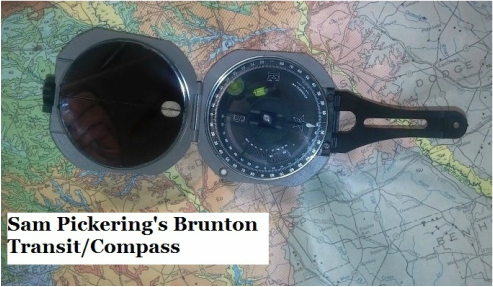 The long Eocene Epoch ended with the Grand Coupure, a European term for the first serious global glaciation event Earth had seen in tens of millions of years. This glaciation drove a global extinction event which hit the seas hard. Globally, the event saw a rotation in species populations. The fossils found along this tour lived in the Oligocene Epoch, just after the Grand Coupure.

Throughout the Eocene the poles were likely ice free. During this global warmth the first modern whales emerged through the proto-whale line, which ended with Georgiacetus, the Georgia Whale. See Georgiacetus (Section 10) and the Basilosaurids (Section 11) on this site.

Research by Dr. Mark Uhen, the leading expert in Eocene and Oligocene whales, suggests that all modern whales are descended through Georgiacetus (8).

By the very end of the Eocene, the earliest cold-adapted whales had emerged. Their fossils are known from Antarctica. See Llanocetus denticrenatus, (Section 11) the oldest known baleen whale whose fossils were found in Antarctica.

The glaciation event which occurred at end of the Eocene would have ended whales if cold adapted species hadn't emerged at the poles. It did end the basilosaurids, but their polar decedents survived.

The climate cooled dramatically and coastlines fell far below modern levels as glaciers spread from the poles. The Coastal Plain sea was drained when the glaciers reached their peak, and our coastline retreated all the way to the Continental Shelf.

The Eocene ended in the ice of the Grand Coupure and Oligocene Epoch opened when the world warmed again, the ice retreated, and sea levels rose dramatically. New species had an opportunity to become established. Older, cold-tolerant species, expanded their ranges.

This survey was done at the request of Samuel W. McCallie; the adventuresome Georgia State Geologist from 1908 to 1933. The 1911 survey served Georgia very well, revealing wealth that supported a century's worth of mining operations, uncounted jobs, and carried us through two world wars.

Veatch & Stephenson filed this 1911 report on these deposits. (7)
​Elko, Houston County.-There is a well-known occurrence of flint (chert) in the railroad cuts one mile south of Elko. The flint appears as massive fragments of compact jasper, breaking with a sharp, splintery, conchoidal fracture, and also as friable, very fossiliferous masses in red clay.

The locality is of interest as the flint and clay may be of economic value for road material. At Taylors Ford, four miles south of Elko, on the Unadilla road, fossiliferous flint fragments embedded in red and yellow clay are prominently exposed.

A collection of Vicksburg (Early Oligocene) fossils was made near this locality by Samuel W. McCallie.

In 1935 this fossiliferous chert suspended in red clay was studied as The Flint River Formation by C. W. Cooke.

F. S. McNeil looked at it in 1947 and H.  E. LaGrand studied it again in 1962; but none of these researchers correctly recognized the stratigraphy of the area.

In 1970 Sam Pickering was the first geologist to understand the sequence of and age of these Houston County fossils.

This tour is primarily based on Pickering's research and field observations from 45 years ago.(1)

Pickering went on to do a tour as Georgia State Geologist from 1972 to 1978 and lead the 1976 project to create the Geologic Map of Georgia. The previous map had been created in 1937.

Pickering also used The Flint River Formation to describe these sediments. That has since been abandoned since there is no bedding for these deposits. They’re not in their original positions; they’re the bones of reefs dissolved long before any hominids ever walked planet Earth.

Pickering correctly recognized that both Early and Late Oligocene fossils were intermingled and suspended in variable sandy clay; typically red clay. The red clay was younger than the fossils it contained. The fossils are recorded in chert, which is hardened limestone originally laid down as reefs.

This limestone originally formed on the sea floor.

Some of the limestone eluded acidic groundwater and absorbed the water’s silica which, over time, hardened the limestone into the tough chert we’re collecting.

Chert does not dissolve in acidic water; it is very tough and resistant to both nature and careless hands.

The chert fossils we’ll find are all that remains from at least two distinct episodes of Oligocene Epoch high sea level stands and reef building on Georgia’s Coastal Plain.

In Georgia’s geologic literature the material you're collecting is referred to as Oligocene Undifferentiated Residuum; an accurate if not very romantic name assigned by Paul F. Huddlestun in 1993. (3)

In its many forms chert can be very colorful and attractive; chalcedony, agate, and jasper are all forms of chert. It is a favorite material for the lapidary arts. Observe its variable textures and colors while in the field.

Chert was the preferred local material Native Americans used for their projectile points and tools throughout their long history in Georgia. Artifacts created from local chert will frequently have little geode pockets of crystals in them, as do many of these fossils you'll find. Crystals such as those seen in the images above. 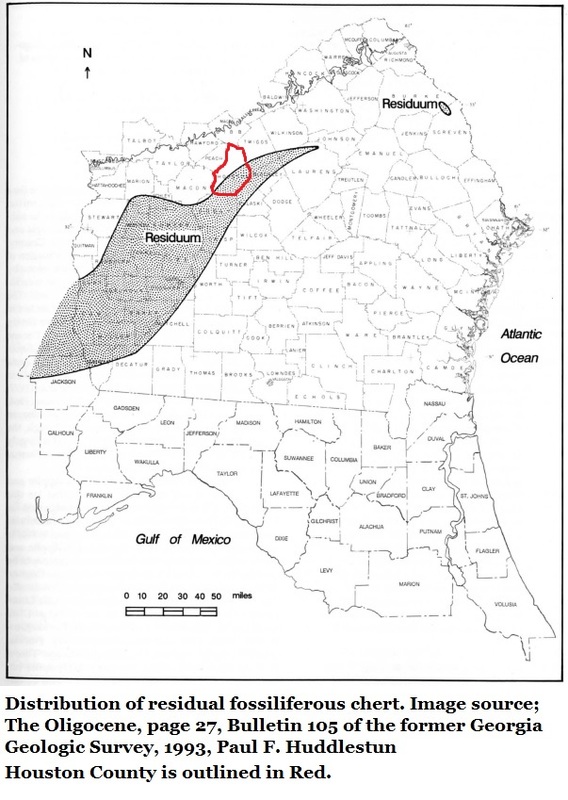 ​It is easy to get lost in the depths of geologic time.

If we broke that down into a timeline, where each year was represented by one inch, our 1 million year timeline would be 15.78 miles long.