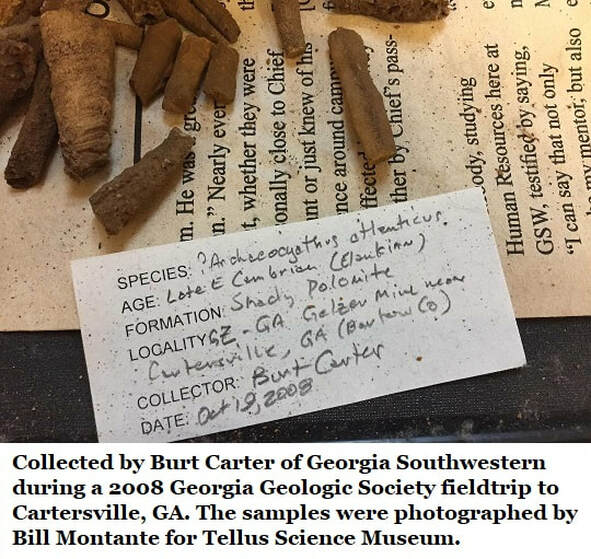 ​Archaeocyathid means "ancient cups" and they’re Earth’s oldest reef building organisms and at 513 million years old, Georgia’s oldest fossil. There were solitary species as well as reef-building ones. They occur in the Shady dolomite formation of the Cartersville mining district in Bartow County, Georgia.

The fossil is essentially two conical calcium structures, like nestled bowls or cones, connected by vertical walls. The structures are porous, it’s believed that water was drawn or pumped through the pores, nutrients filtered out, and the water expelled into the central cavity. It’s thought that the “body” of the living organism occupied the space between the walls.​​ 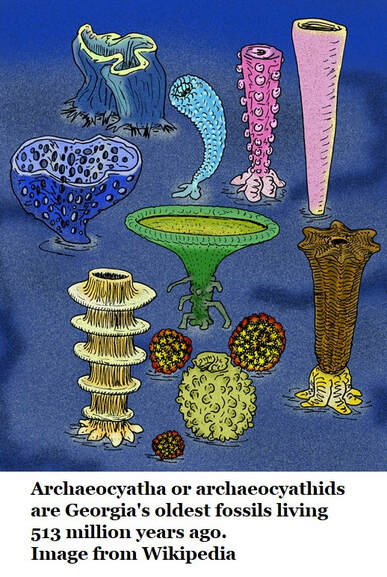 They’re extinct, and we know very little about the living animal but the earliest fossils come from Early Cambrian sediments 525 million years old, in modern Siberia. They diversified dramatically into over a hundred families but at about 516 million years ago they went into a sharp decline. The last known species, Antarcticocyathus webberi, met extinction near the end of the Cambrian about 490 million years ago and is known, as its name suggests, from Antarctica.

Some researchers consider them to be coralline sponges, but this is still a matter of debate. Sponges are known to occur at 580 million years ago. Archaeocyathids resist taxonomy and have yet to be properly assigned in the Linnaean scientific classification systems; another matter of ongoing debate. 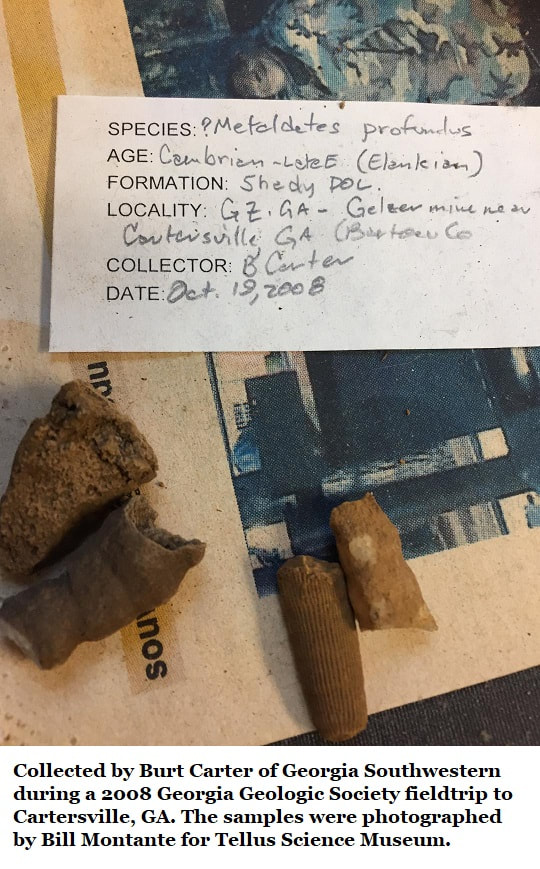 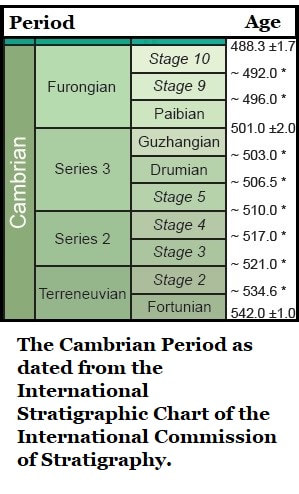 From the minds of many…
I want to thank Cam Muskelly, Bill Montante (Tellus Science Museum), Asa Kaplan and Burt Carter for their assistance on this page. These Northwest Georgia Valley & Ridge fossils are from a very different world than the sediments I usually work in south Central Georgia’s Coastal Plain. Muskelly introduced the topic on Facebook’s Georgia’s Fossils Group with the question; “Where can I find Archaeocyathids?”

Montante soon replied “These, as best we know, are Georgia’s oldest fossils. Stromatolites in Georgia are about the same time period... mid Cambrian series two, roughly 513 million years old. Part of an ancient patch reef structure located now in the Bartow County Cartersville mining district. Shady dolomite formation.”
​
Asa Kaplan led me to the 1950 publication Geology and Mineral Deposits of the Cartersville District, Georgia by Thomas Kesler (1) where the Shady Formation is described.
​
In 1950 Kesler suspected 5 genera of archaeocyathids occurred in the Shady Formation, referring to them as “coral sponges”. He reported that they were the formation’s most abundant fossil and had been reviewed by J. Brooks Knight and G Arthur Cooper of the United States National Museum (Smithsonian).  Knight and Cooper reported; “An undetermined archaeocyathid, Nisusia sp., Semicircularea sp., Helcionella cf., Helcionella rugosa.”
References;
1.       Geology and Mineral Deposits for the Cartesville District, Georgia; Thomas Kesler, United States Department of Interior. Geological Survey Professional Paper 224, Pag 63, 1950; pubs.usgs.gov/pp/0224/report.pdf