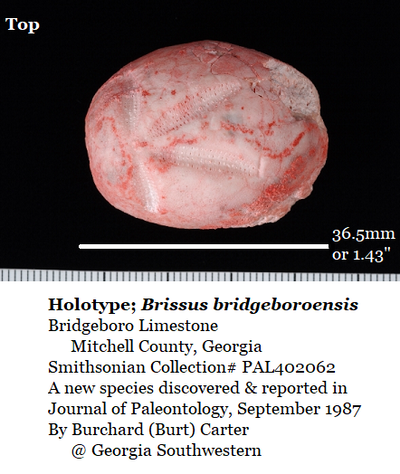 In 1987 Dr. Burt Carter, from Georgia Southwestern (GSW), reported a new species of extinct, early Oligocene heart urchin from the Bridgeboro Limestone of southwest Georgia. Carter published his find in the September issue of the prestigious Journal of Paleontology.  Today, Burt Carter is a Professor of Paleontology at GSW and still a student of Georgia’s deep past. Brissus bridegboroensis is the oldest known member of the genus in the eastern USA. There are older members of the genus is the Caribbean, and probably an older member in Europe. 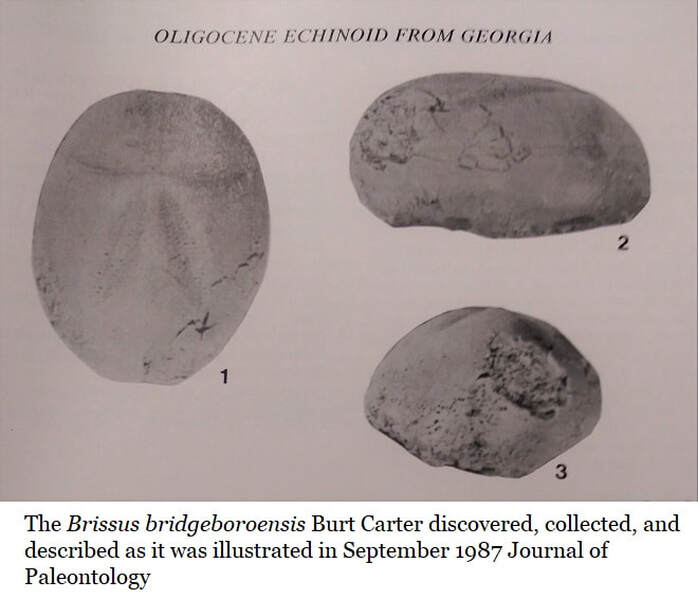 ​Earlier that same year, Carter and J.P. Manker, also at GSW, had published an especially important paper using the uncounted rhodoliths of the Bridgeboro Limestone to prove the speculated existence of both the Gulf Trough and Suwannee Current in Georgia’s natural history. They showed the strength and approximate dimensions locally of the Suwannee current when the Bridgeboro formed. (See Section 8 of this same website) The Suwannee Current existed for tens of millions of years and carved the Gulf Trough. 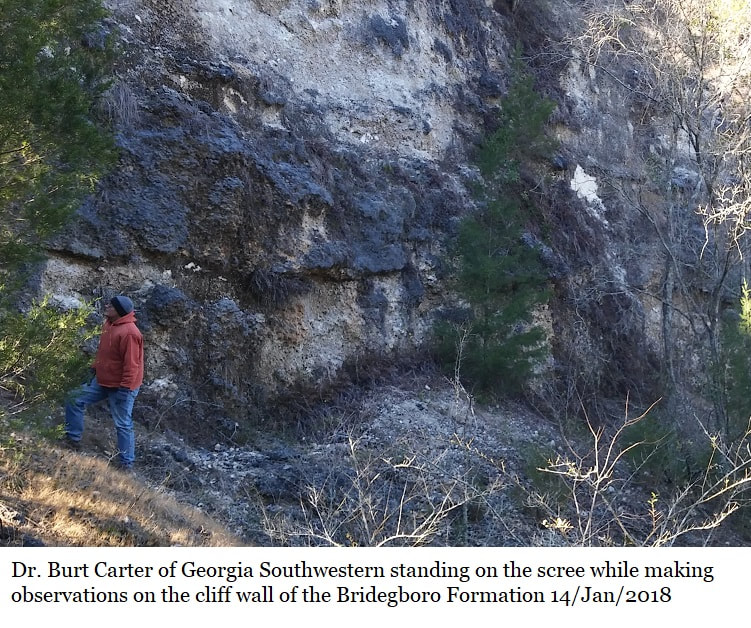 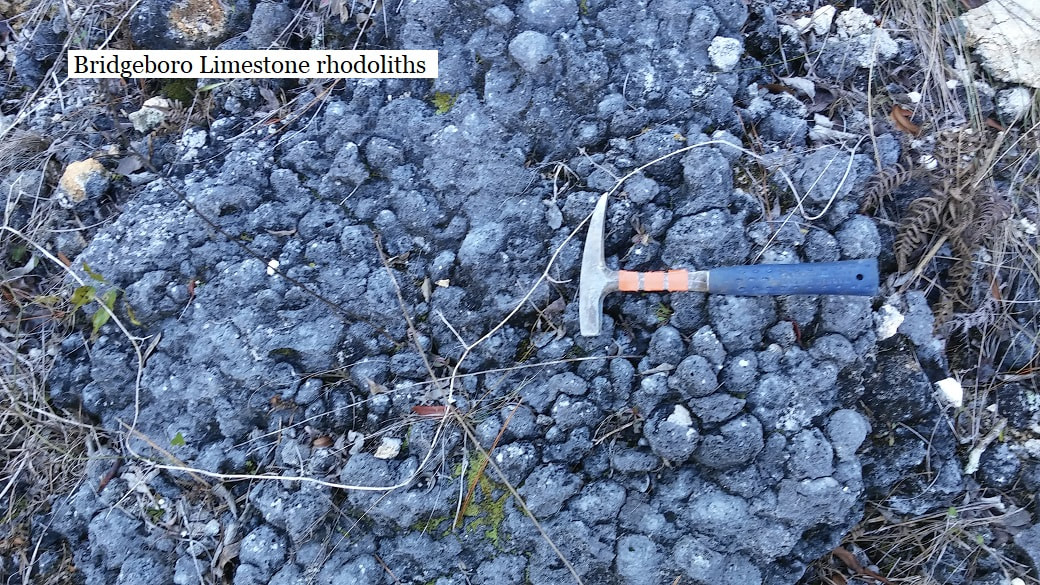 Carter reported that the specimen was found upright, but no spines were present. The matrix was a carbonate sandy gravel or gravelly sand, the rhodoliths present were greatly reduced in both size and population. 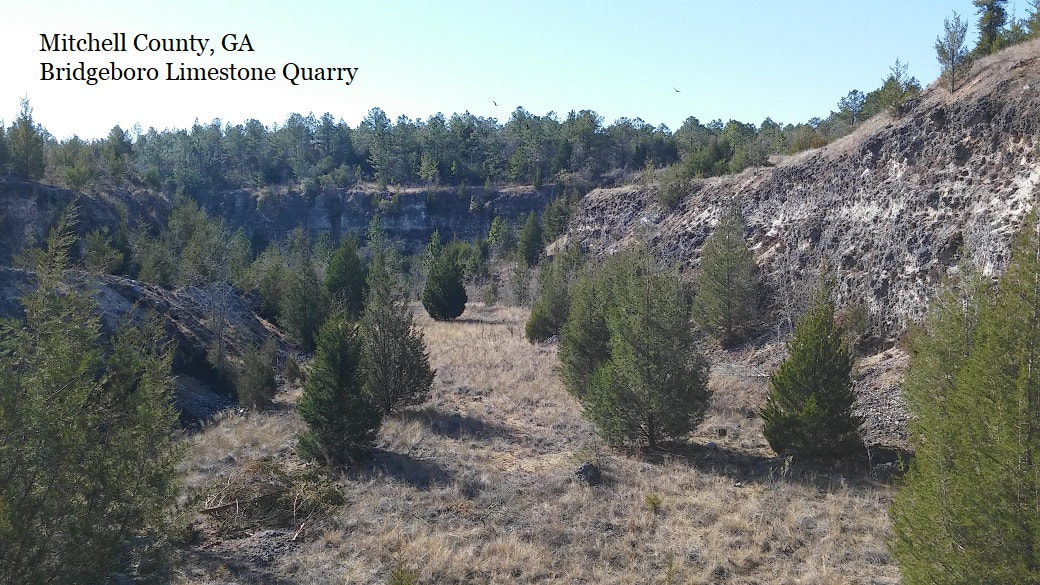 The specimen collected by Carter is assigned as the species holotype. The aboral surface (surface opposite to the mouth) is excellently preserved and many details are easily observed. The margins are not as well preserved having been exposed to some crushing and dissolution. “As a result the general shape of the periproct is known but the details are obscure.” The specimen’s oral surface is obliterated. Nothing certain can be said of the peristome, though it apparently was similar to that of B. unicolor in shape and position.
Diagnosis of the new species based defined by the holotype.
Specimen to be deposited in the U.S. National Museum of Natural History (Smithsonian) as specimen PAL402062.
​
“A rounded, moderately inflated Brissus with long posterior paired petals compared with either anterior paired petals or test length. Petals nearly straight. Few pore-pairs per unit length in posterior paired petals. Apparently the subanal fasciole is more anteriorly located than in other Brissus species.”
Dimensions.
Length, 36.5 mm (1.43”)
Maximum width, 28.7 mm (1.13”).
Maximum height, 21.0 mm (.826”) near posterior end.
Height of apical system, 17.0 mm (.66”)
Length of anterior paired petals, 10.2 mm (.40”)

In 1959 C. Wythe Cooke published Cenozoic Echinoids of the Eastern United States through the USGS. In it he described & imaged all the fossil echinoids from the last 66 million years which were known in 1959. Cooke reported two species of Brissus echinoids occurring: Brissus glenni & Brissus unicolor, images and measurements of both are included. 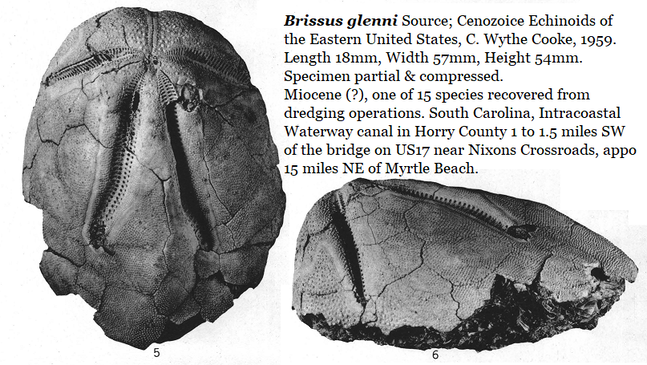 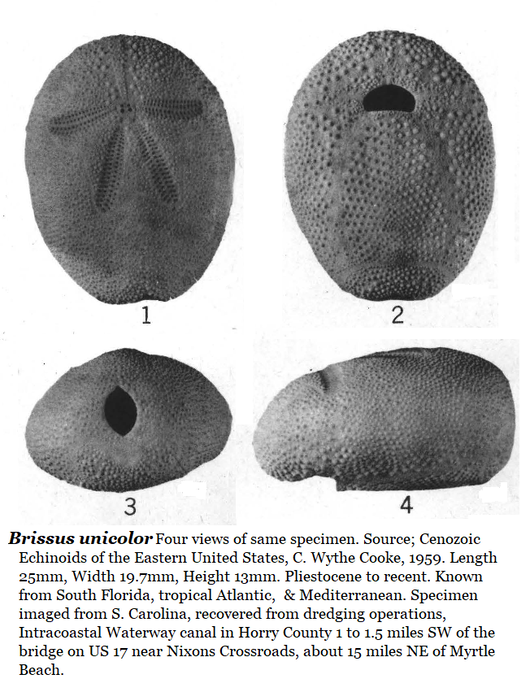 A few more have since been reported, but Georgia’s own Brissus bridegboroensis is the oldest known member of the genus.
​
​
​References: