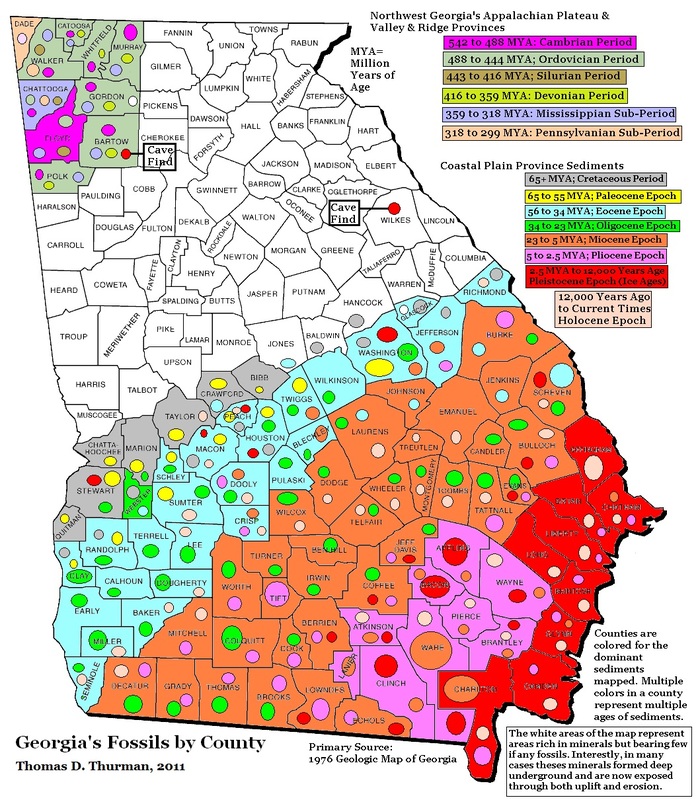 In 1957, while working for the Georgia Geological Survey, Vernon Hurst compiled a list of known vertebrates from Coastal Georgia; this was published in the autumn edition of the 1957 Georgia Mineral Newsletter.

The below passages are quotes from Hurst’s work (some of these originated with the 1911 research by Veatch & Stephenson). The locations and descriptions given suggest that it might be worthwhile for area residents to investigate these or similar localities.

To quote Hurst (1957);
Important collections of vertebrate fossils have come from two places on the Coastal Plain of Georgia: the vicinity of Brunswick; and the area including, and just south of, Savannah.

Brunswick Area: In 1838-39 during the construction of a canal to connect the Altamaha River with the Turtle River near Brunswick, the bones of several large mammals were unearthed. (This would have been the same project which produced the holotype for the Columbian mammoth, Mammuthus columbi.)

Most of the bones were found in six-mile swamp about 10 miles west of St. Simon’s island. Quoting from Hay (1923, P.370; This is Oliver Perry Hay whom we discussed earlier), “The swamp has the appearance of a lake which has been filled with alluvial deposits (sediments deposited by flowing water)”.

These consist of compact clay, usually yellow and impregnated with iron. There are thin strata of soft, chalky marl (crumbly mixture of clay & limestone) and many fragments of petrified wood.

At the bottom of this deposit were found the bones of Megatherium (which has since been overturned and reassigned as Eremotherium), Elephas, Mammut, Equus, and Bison. (This would be giant sloth, mammoth, mastodon, horse & bison.) Beneath the clay stratum was sand with marine shells. Overlying the clay was a thin stratum of vegetable and sandy loam. The bones occurred at a depth of from 4-6 feet.

Several times since 1839 fossil remains have been brought up by dredging operations in or near Brunswick, fragmentary bones and teeth obtained in this manner were indentified by J. W. Gidley (Veatch & Stephenson, 1911, P.436).

They were re-examined by Hay (1923, p.370) who gave the following list as inclusive of all vertebrate fossils collected from the Brunswick area up to 1923:

According to Hay, the femur described by Harlan (1842, p.189) as Chelonia couperi (sea turtle) more closely resembles that of an edentate mammal (sloth, anteater or armadillo family).

Also, the shark teeth believed by Gidley to represent Eocene and Miocene species might be younger, inasmuch as species of all three genera mentioned by Gidley are yet living on the Atlantic Coast. (Sediments along the coastline often contain fossil from multiple time frames)

Savannah Area
As early as 1823 teeth belonging to a Megatherium (Reassigned as Eremotherium) were reported from Skidaway Island, near Savannah (Mitchell, p.58). In 1824, more than 20 bones which apparently belonged to the same animal were reported by William Cooper.

The bones were found at two places half a mile apart near the west end of the island, at low water level and where a bend in the Skidaway River had eroded the bank away.

In 1846 Dr. Joseph Habersham (from Hodgson’s “Memoir of Megatherium”,1846 , pgs 25-300) published a list of the species discovered on Skidaway Island up to that time.

In 1849, Sir Charles Lyell (p.313-314) gave an account of his visit to the locality and the species he found there. “The bones occur in a dark peaty soil or marsh mud” according to Lyell, “above which is a stratum, three or four feet thick, of sand, charged with oxide of iron, and below them and beneath the sea level, occurs sand containing a great number of marine fossil shells, all belonging to species which still inhabit the neighboring coast.”

The box tortoise Terrapene canaliculata (modern; Terrapene carolina) was described by Hay (1907 p.850) from fragmentary materials sent to the U.S. National Museum (now the Smithsonian Institution National Museum of Natural History) by Dr. J. P. Scriven of Savannah. Whether the remains were found on Skidaway Island or on Whitemarsh Island is uncertain.

Casey Canal, Savannah City Limits
During 1941 several hundred pounds of vertebrate fossils were collected along the banks of the Casey Canal within Savannah city limits. Fifteen crates of them were shipped by Captain Garlan Peyton, Director of the Georgia Geological Survey, to the National Museum, Washington DC (now the Smithsonian Institution National Museum of Natural history).

Though the author is not aware of any documentation for this, it may be that some of the fossils of the Smithsonian Collections mentioned in this manuscript originated from this shipment.


In 1954, Mr. John Olsen, Jr., found fossils in the sand and muck thrown up by a dredge working the Inland Waterway at the Isle of Hope near Savannah. Mr. Olsen identified the remains of horse, elephant, shark, boar, a rodent, and a date palm seed. (Savannah Evening News, June 19, 1954)


Other Areas: Recent dredging (written in 1957) in the Kingsland-St. Mary’s area by the Western Contracting Corporation has uncovered numerous vertebrate bone fragments, horse teeth and shark’s teeth, but a systematic collection and study of these materials has not been made.


Large bones of Pleistocene mammals have been found at Whiteoak in Camden County. They occur near the station (train?) just above the level of high tide, in an olive-green, sandy clay which contains white limy concretions. (Veatch & Stephenson, 1911, P.437)(33)