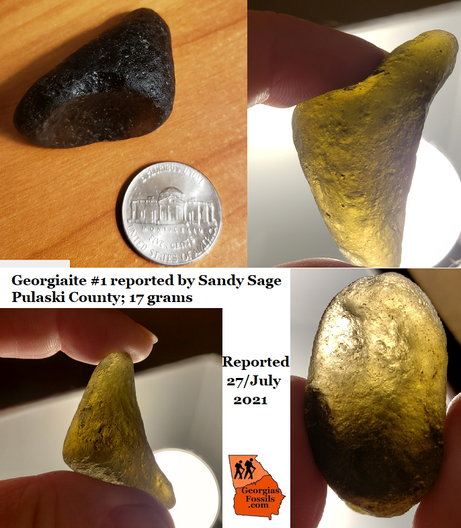 ​So what's a tektite?
A tektite is glassy debris from an extraterrestrial impact; the impactor can be a meteorite or comet.

Imagine throwing a rock into a mud puddle and observing the pattern of splash droplets.

Now imagine a large meteorite impacting a shallow, coastal sea; the “splash” throws molten material on a trajectory into space, then it falls again to Earth, transformed, usually as dark colored glassy material typically black or green in color. These are tektites. There are many varieties.

The geographic areas they are found in are called strewn fields. If you have a spread of matching tektites found in their original locations, from a wide enough geographic area, you can triangulate their source.

A tektite found in Georgia is called a georgiaite, it's believed that georgiaites originated from the Chesapeake Bay impact event about 35.5 million years ago. 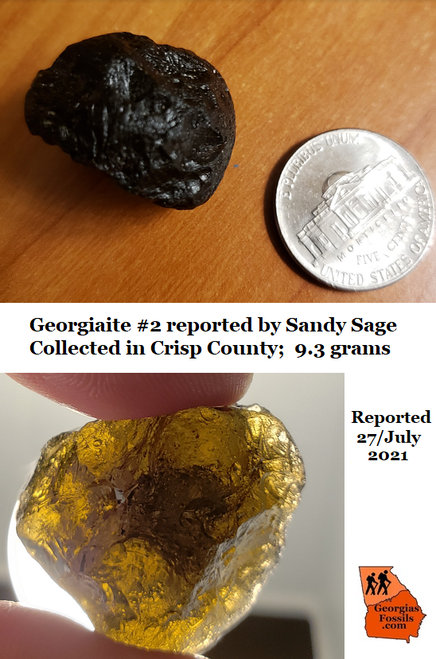 Sadly, no georgiaite has ever been found in its original location. According to Hal Povenmire, who’s recovered and handled more georgiaites than anyone, there are approximately 1,000 to 1,500 known specimens. Povenmire has written both articles and books on the subject. He's even seen a georgiaite or two that Native Americans had worked into points.

None of these specimens have come from age appropriate sediments. 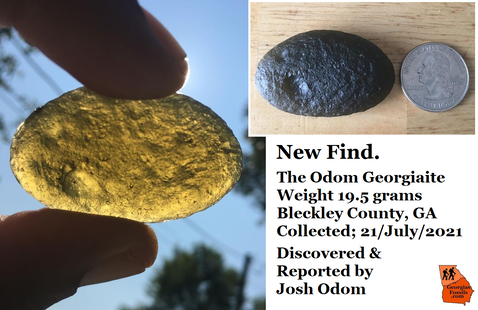 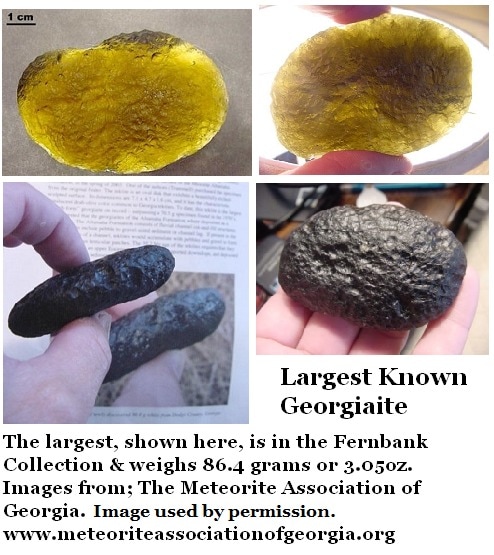 I want to announce that Hal Povenmire passed in early
December 2019.
The tektite world will never be the same.
​Hal will be missed.
New Finds

For years many thought that Georgia's strewn fields were played out, that there were probably no new finds to make.

It has been the pleasure of this website to introduce these new finds and advise the owners of how to bring them to the markets. 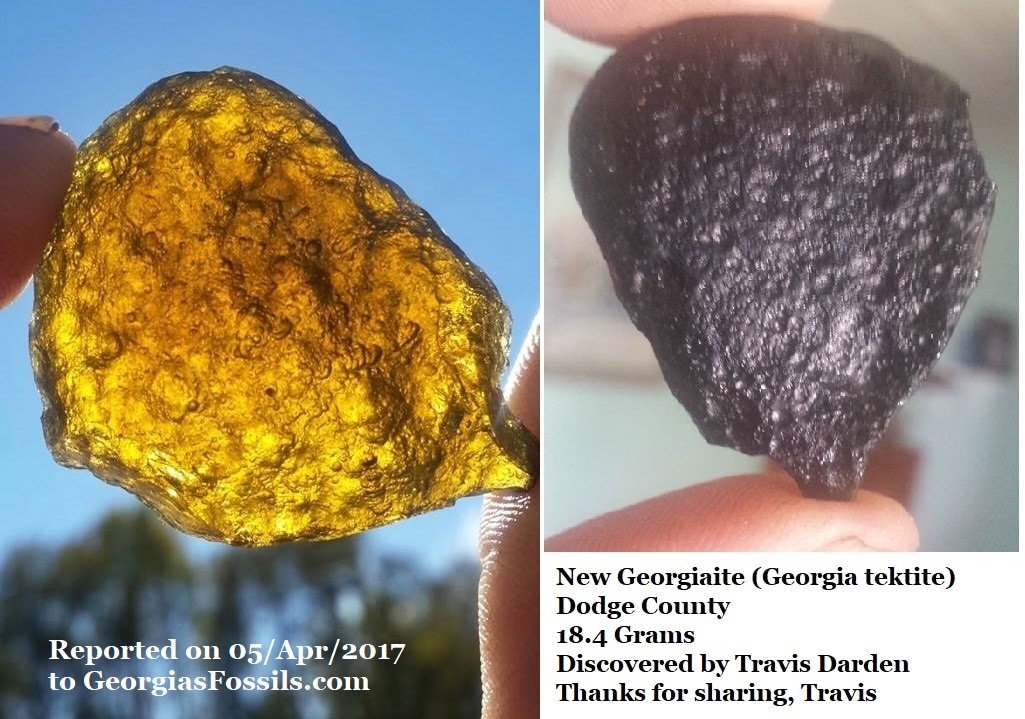 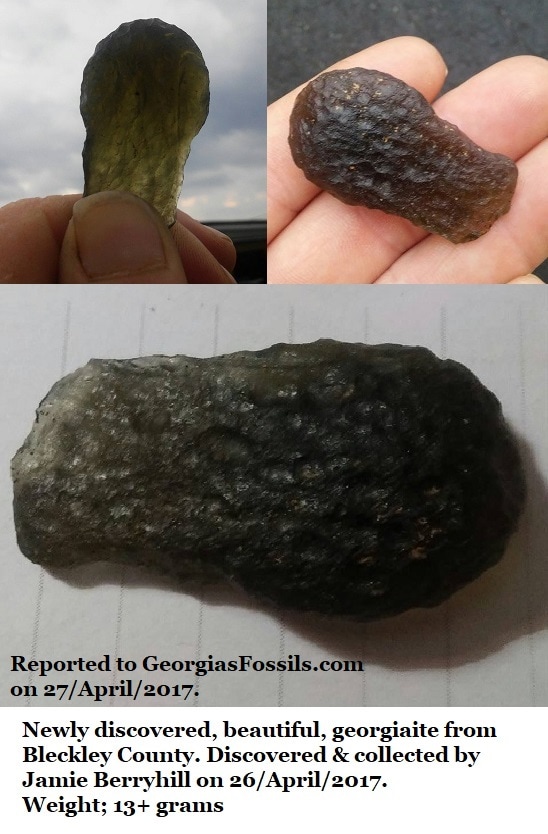 It has been the pleasure of this website to introduce these new finds and advise the owners of how to bring them to the markets. 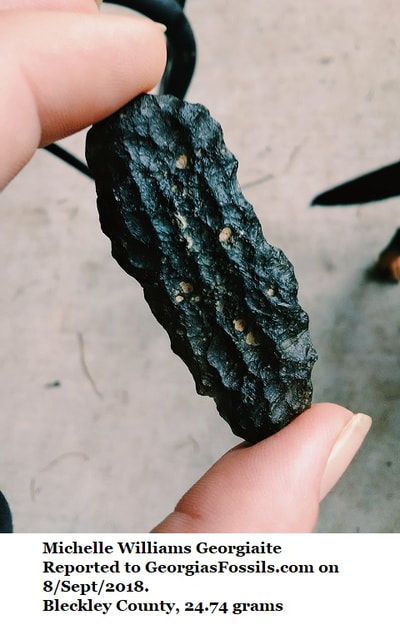 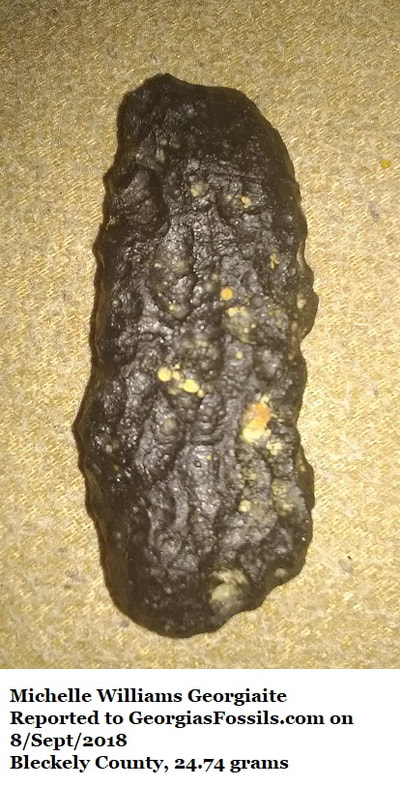 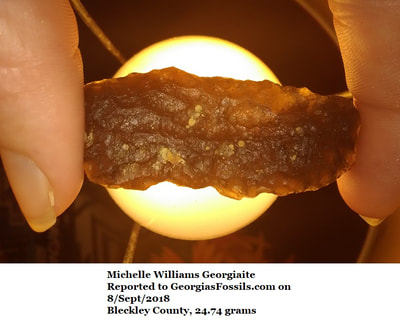 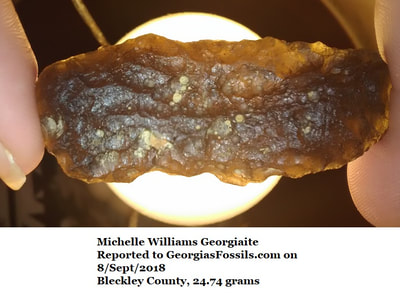 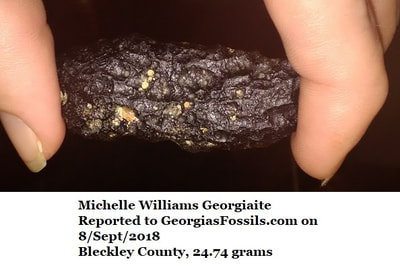 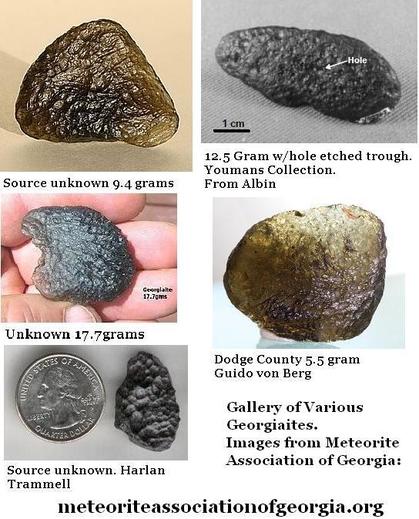 ​
​Physical Description
Georgiaites are distinct tektites; known only from the Southeastern USA. The vast majority of these are from the central and eastern portion of Georgia’s Coastal Plain, a handful have been confirmed from South Carolina.

Complete georgiaite specimens are typically shaped like an elongated teardrop, an aerodynamic shape, though there are many exceptions to this. They are almost always rounded.

They have passed through the space and the atmosphere as molten material. They were then completely cooled and soon buried in the sediments which the Chesapeake Bay impact stirred up. Those striking north of the Fall Line, north of the coastline, probably shattered on impact with the ground.

They are dense and glassy. Generally black in color, but translucent, back-lighting will make it appear greenish or yellowish. Their surfaces are typically dimpled. 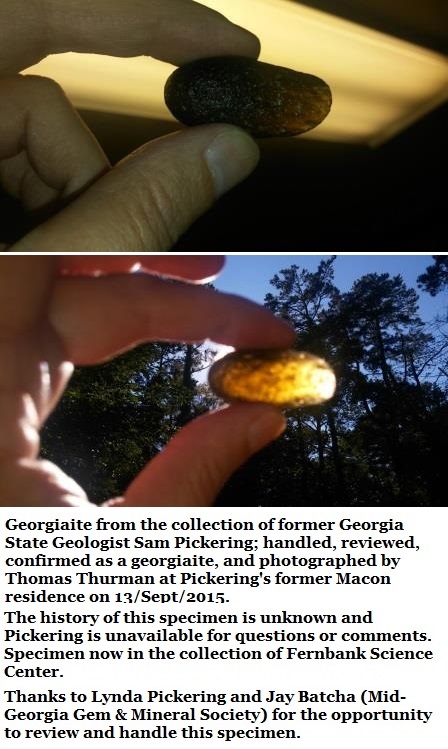 Valued by Collectors
Georgiaites are rare and valuable, especially in Europe were collectors might pay hundreds of dollars per gram (retail) for the best specimens. The average size is 10-12 grams. The largest known georgiaite is 86.4 grams (3.05 ounces) and is in the Fernbank collection. Large ones are very likely still out there.

If you think you’ve found a georgiaite then it needs to be confirmed; contact Thomas for instructions on sending some pics. GeorgiasFossils@aol.com
​ 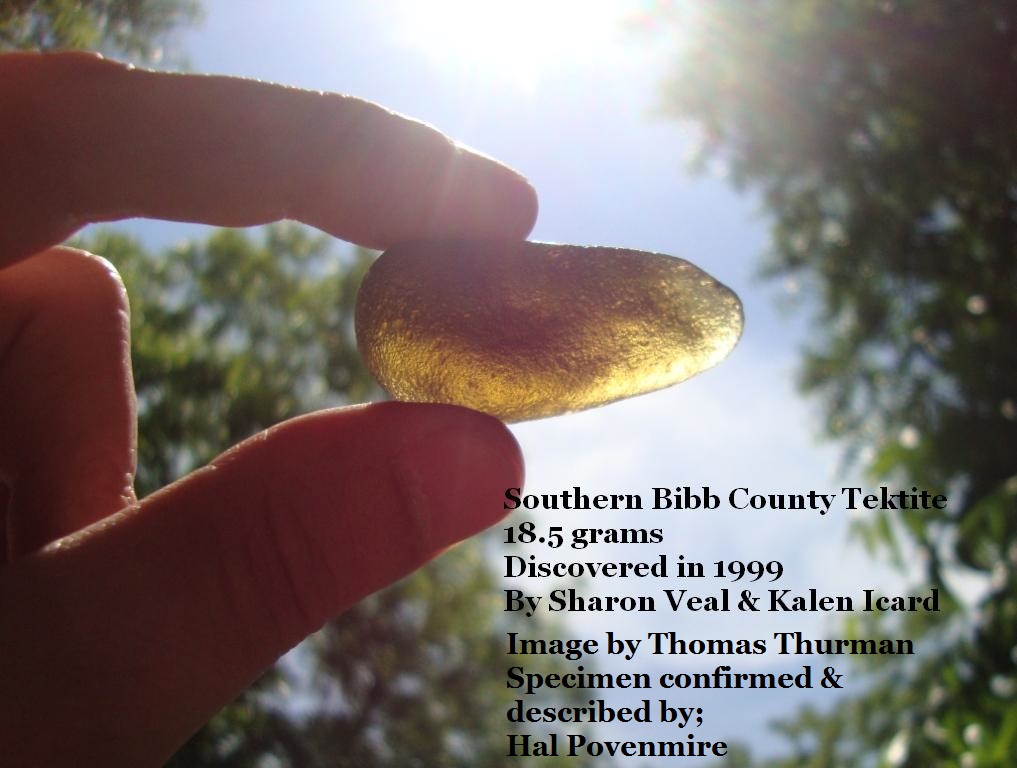 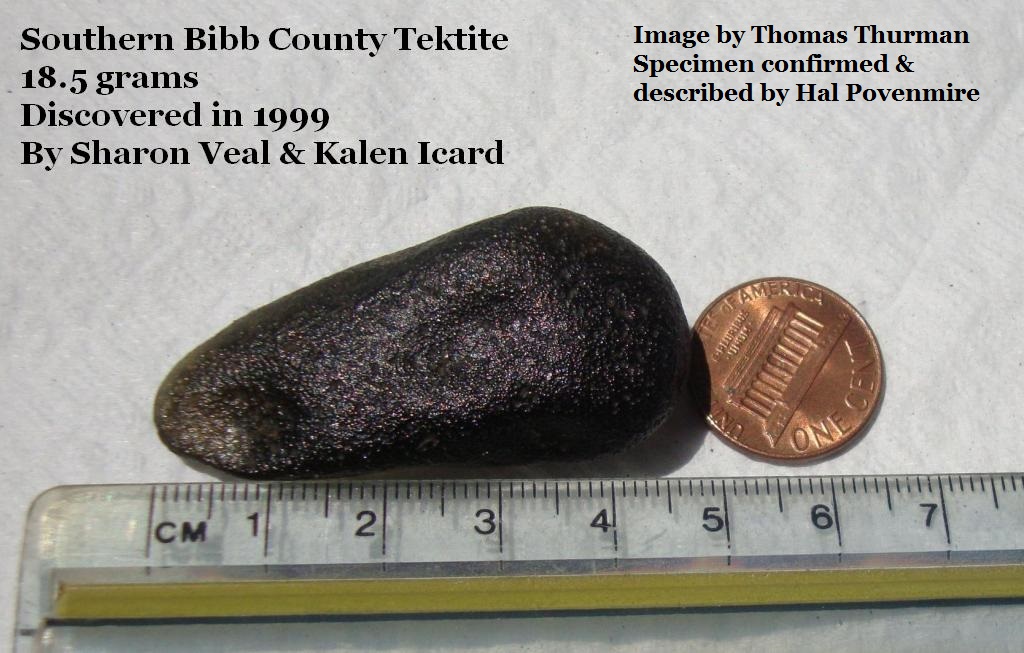 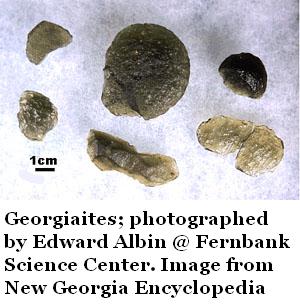 Bolide is the term scientist use for an extraterrestrial impactor when they don’t know if it was a rocky meteorite or an icy comet.

This was a catastrophic event locally; devastating event for most of the eastern seaboard of the USA. Furthermore, it was not the only large impact event from this timeframe. The two largest identifiable craters are the Popigai structure (100 km or 62.14 miles across) in Siberia and the Chesapeake Bay impact crater (85 km or 52.82 miles across).

Some researchers have speculated that the Chesapeake Bay and other Late Eocene impacts triggered the global cooling which led to the global Eocene/Oligocene horizon extinction event which occurred about a million years later. Additionally, it’s been proposed that these impacts influenced global climates and perhaps “tipped the scales” towards the Eocene Epoch glacial extinction event.

In a 2001 article by Hillary Mayell with the National Geographic News; United States Geological Survey researchers David Powars and C. Wylie Poag argued that a 2 million yearlong bolide shower occurred between 36 and 34 million years ago; including the Chesapeake Bay impact event.

But did these impacts influence the extinction event?

We’ve looked briefly at the global sea level work of Dr. Kenneth Miller with Rutgers; Dr. Miller has also looked into the Eocene/Oligocene horizon question and reviewed the evidence for an impact related extinction event.

This gives us a 1-plus million year gap between the impacts events, the extinction event and the global cooling which marks the Eocene/Oligocene boundary; one million years is a long stretch of time.

In a separate 2009 paper led by Aimee Pusz, Kenneth Miller, and James D. Wright entitled: “Stable Isotopic Response to Late Eocene Extraterrestrial Impacts” researchers looked specifically at the oxygen isotope levels in sediments immediately before and after these impacts. They could find no global temperature changes directly associated with the Popigai or Chesapeake Bay impact events.

Still; the event was catastrophic for the Eastern Seaboard of North America.

The impact blasted its crater. Millions of tons of water evaporated and the vast Chesapeake Bay Impact Crater was instantly excavated. The detonation of the impact would have cast sea floor material high into the air at terrific velocities. The shock wave that was generated sent a wall of water, a tsunami, racing across the north Atlantic.

There is evidence suggesting that this tidal wave topped the Blue Ridge Mountains.

Moments later; sea water rushed back into the still hot crater to fill the void. This would have affected the whole East Coast probably even pulling water from the sea which covered Georgia.

Perhaps at this point georgiaites fell. They were forever altered by the heat of the impact, flight through the atmosphere, into space, re-entry into the atmosphere and then falling onto Georgia’s Coastal Plain is a still partially molten form to be cooled in the shallow Southeastern Sea.

Next came the rebound as the crater refilled with water, this would have sent a second tidal wave racing out from the new Chesapeake Bay, this tidal wave certainly devastated Georgia’s Fall Line coastline.

Connecting Georgiaites to Chesapeake Bay
The Meteorite Association of Georgia maintains a wonderful Georgia tektite image gallery online (meteoriteassociationofgeorgia.org); they report that the first georgiaite was documented in 1938 by E.P. Henderson of the Smithsonian. It was found by Dewey Horne near the town Empire, Georgia in Bleckley County.
For years… debates raged about the source for Georgia’s tektites, many argued that they were debris from meteorite impacts or volcanic activity on the moon. But if that were true, why are the ones from Georgia so distinct?

The Chesapeake Bay Impact Crater was discovered in 1983. 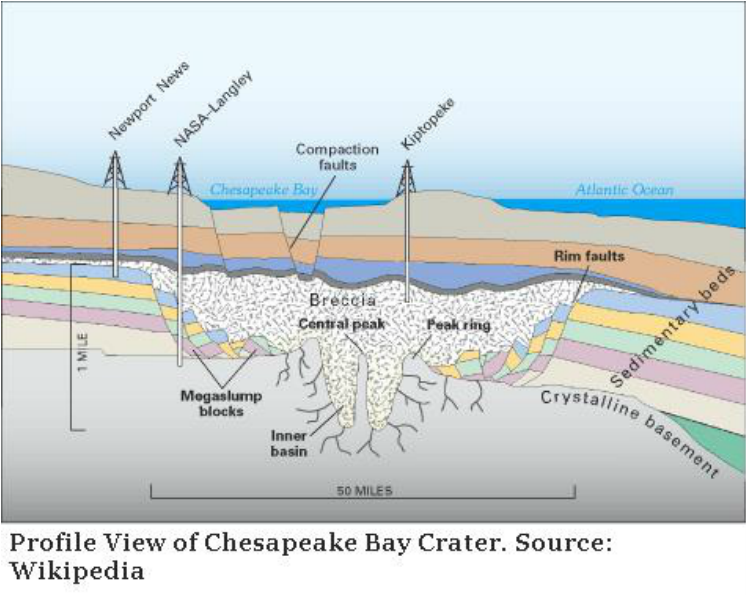 In a 1996 research paper by Dr. Edward Albin at Fernbank Science Center in Atlanta, ten georgiaites from the Howard collection at the Fernbank Museum of Natural History were dated using the potassium-argon method.

These produced an average age of 34.7 million years with a possible error rate of 400,000 years either plus or minus.

One of the problems is that no Georgia tektite has ever been recovered from age appropriate sediments, they’re typically found in the significantly younger Altamaha Formation dated to the Miocene Epoch (23.0 to 5.3 million years old).

Since the known georgiaites occur as secondary deposits, relocated from their original position; Ed Albin at Fernbank has questioned whether the tern “Strewn Field” should apply to georgiaites. It is assumed that they haven’t travelled far, but we don’t know how far.

All Georgia tektites are valuable, but the most valuable of all will be the first one which can be conclusively shown to come from age appropriate sediments. Such sediments are common enough in the Southeast.

However, when I asked Paul Huddlestun about this, the man who has done more field research on Georgia’s Coastal plain than anyone, he expressed serious doubts as to whether any Georgia tektite would ever be found in Late Eocene sediments.

As channel lag they’re concentrated in the younger Altamaha Formation. They would be much more dispersed in the Eocene sediments, and very possibly destroyed by natural processes.

If you think you’ve found a georgiaite then it needs to be confirmed; contact Thomas for instructions on sending some pics. GeorgiasFossils@aol.com 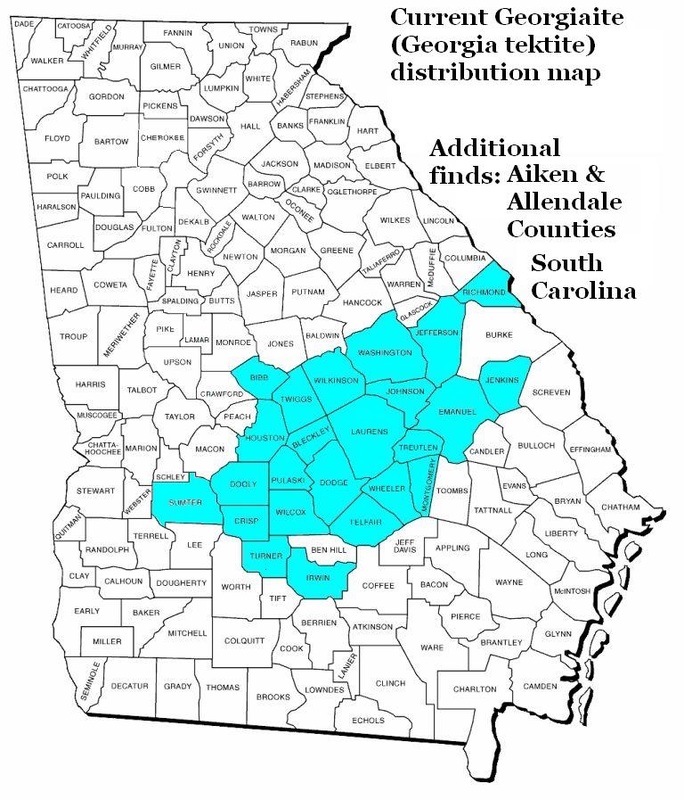