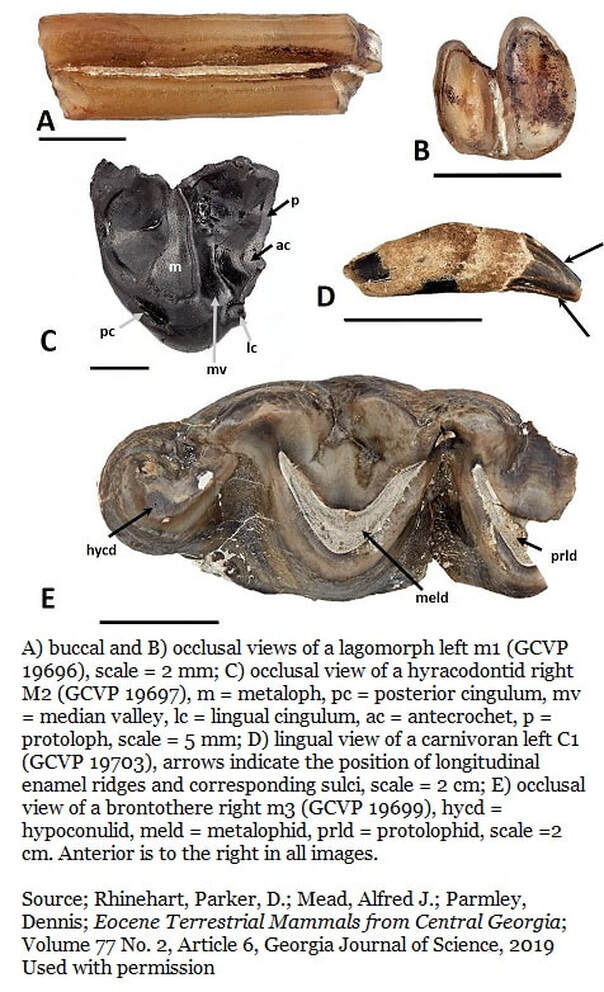 Wilkinson County’s Hardie Mine is an inactive kaolin mine just north of Gordon, Georgia in Wilkinson County. It has been a treasure trove of Eocene Fossils and previous work from Georgia College has done a splendid job of collecting, researching and publishing these finds.
​
​The fossils come from a spoil pile of the Clinchfield Formation near the north wall of mine pit. At the wall the Clinchfield Formation occurs as a bed approximately 1 meter (3.28ft) thick underlain by kaolin deposits and overlain by non-fossiliferous Twiggs Clay.

You no doubt noticed they’re all teeth. Tooth enamel is the hardest substance the body creates and the one which is most easily preserved as fossils. 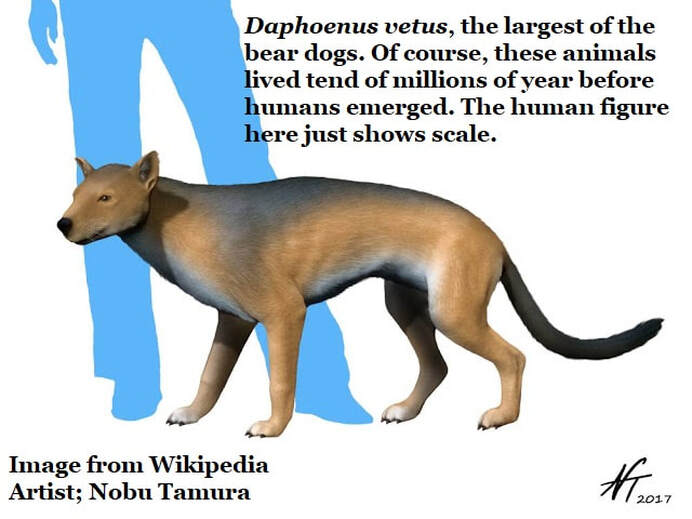 Daphoenus (bear dog)
The canine tooth shown was compared to Daphoenus and Hyaenodon mustelinus (Hyena-tooth) specimens from Badlands National Park and held in the Georgia College vertebrate paleontology collections. The size and dimensions of the tooth clearly identified it as a bear-dog.
​ 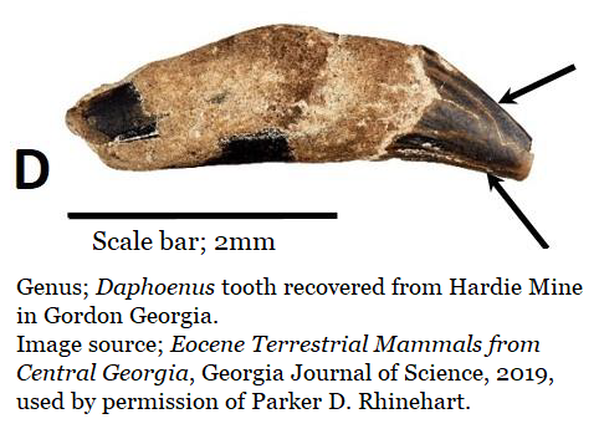 Daphoenus from Wikipedia:
“Daphoenus, like the rest of its family, was called a "bear dog" because it had characteristics of both bears and dogs. These animals were about the size of the present-day coyote. Daphoenus vetus was the largest species. The male skulls could reach up to 20 centimetres (7.9 in) in length. Daphoenus had short legs and could only make quick sprints; it was not capable of running long distances. It is thought that these animals ambushed their prey and did some scavenging. Fossil footprints suggested that, like present-day bears, these animals walked in a flat-footed way. Daphoenus dug burrows for their offspring to stay in and hide from their prey.”

To quote Rhinehart’s paper;
“The Hardie Mine specimen represents the first known occurrence of Daphoenus in the southeastern United States.”
​ 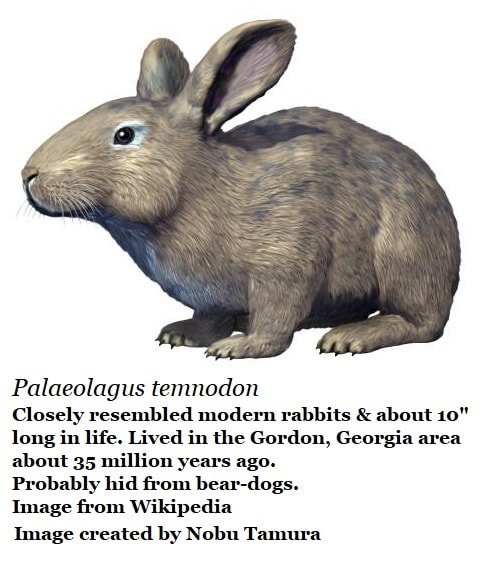 Palaeolagus temnodon (rabbit or hare)
A cheek tooth from the lower law, as imaged, was recovered from the Hardie Mine sediments which lived near Gordon, Georgia 35 million years ago. The tooth was identified by comparison with specimens in the Georgia College collection from Badlands National Park in South Dakota.
​ 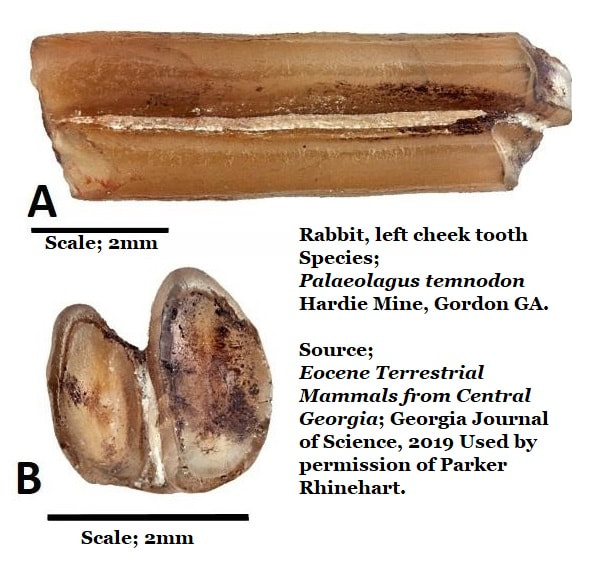 This ancient hare, like modern hare, lived in a savannah, plain or woodland between fertile lands of the paleo-Ocmulgee and paleo-Oconee Rivers. No doubt it hid whenever it sensed the presence of bear-dogs.

The genus Palaeolagus lacked the highly developed hind legs which modern rabbits and hares enjoy, so it wasn’t fast by today’s standards. But, as we’ve discussed, neither was the bear-dog Daphoenus. It may well be that speed, or bursts of speed, evolved together in both prey and predators. Any advantage, no matter how small, which encourages survival and reproduction in an individual is both copied and magnified in successive generations.

There’s another important fact about this tooth from Palaeolagus temnodon. To quote Rhinehart’s paper;
“The Hardie Mine specimen represents the first known occurrence of Palaeolagus in the southeastern United States.”
​ 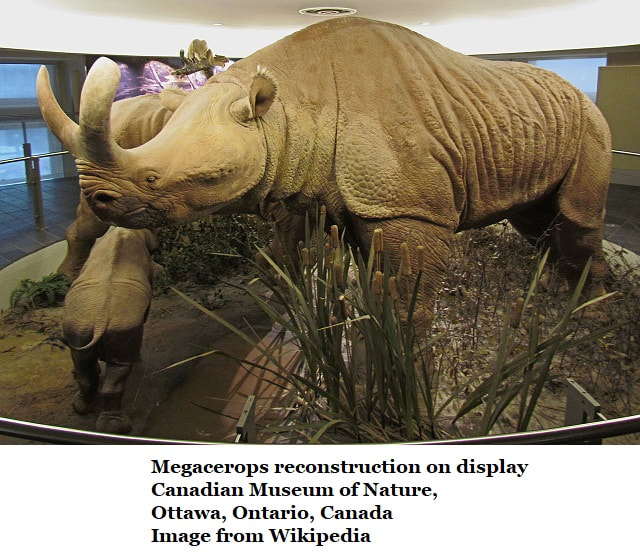 ​Megacerops (brontothere)
An almost complete Megacerops tooth was reported in the paper, a right molar.
​ 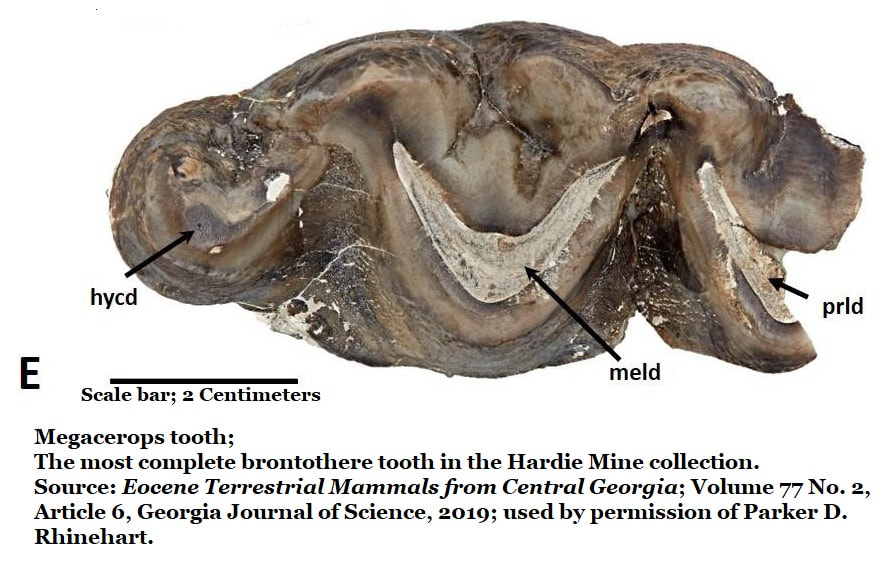 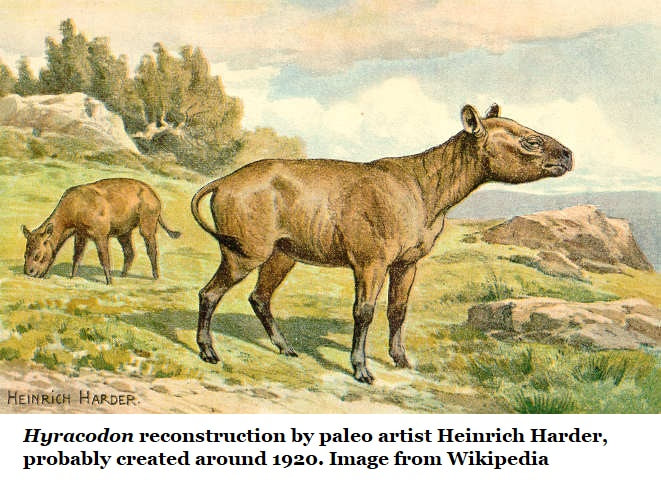 Hyracodon (hornless rhino)
Hyracodon looks somewhat like a horse, or a pony at first glance, but is in reality related to rhinoceroses. It has been described as a hornless, agile-built rhino with three toes on each foot. It was adapted towards running and was likely a browser.
​ 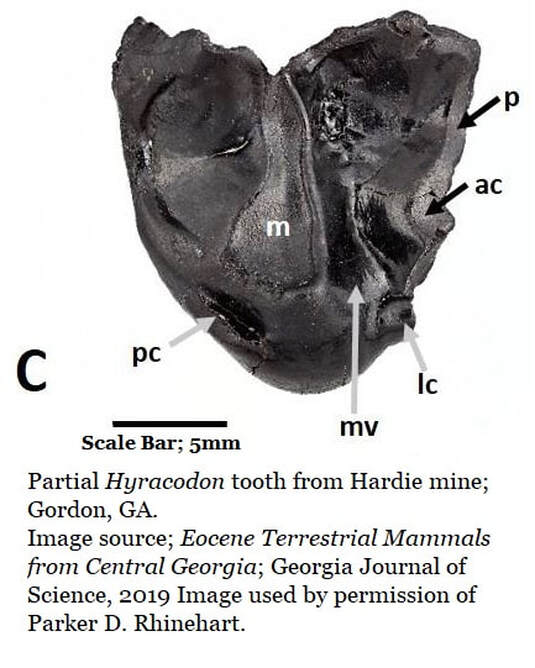 The recovered tooth, though partial, shows the diagnostic characteristics of a Hyracodon. This Hardie Mine specimen represents the first known occurrence of Hyracodon in the southeastern United States.