Bill Montante passed on Monday 07/March/2022
He will be remembered as a
Gentleman, Scholar, Scientist, Friend & Family Man. ​
​ 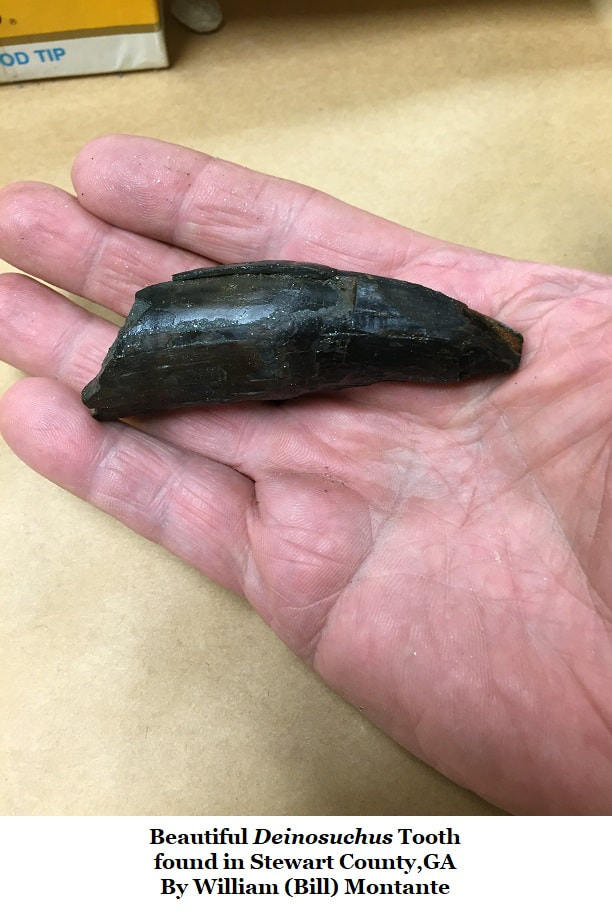 Imagine you are the top terrestrial predator during the late Cretaceous in what is now Georgia - an Appalachiosaurus strolling along the shallows of an estuary some 75 million years ago. The midday sun warms your reptilian hide, and wet sand squishes between the claws of your feet.  Suddenly there is an explosion of water and noise to your side. Instinctively your body reacts – fight or flight - but there is no time, no options. You feel the intense pain and crushing force on your leg from the 4 feet long jaws of a 32-foot long crocodilian – Deinosuchus (taxonomically an alligatoroid crocodilian). The predator has become the prey. You struggle to free yourself, but your puny arms flay about in panic nor can your own powerful jaws reach the predator’s armor-plated body. It attempts a death roll; you resist, but “resistance is futile.” Flesh rips open and bones crush under its estimated 20, 000 psi bite force.  It weighs at least 6 tons, you a mere 2 tons. Those opposing forces suddenly snap one of the gator’s spiked teeth. It goes flying and buries itself in the wet sand.
​
How this titanic struggle ended is not important; certainly predictable. That tooth completes this story. Fast forward 75 million years.

It was a sultry mid-August day in Stewart Co. Georgia. Sunlight filtered through the canopy warming my back. I am muddy from the waist up and soaked from the waist down as a I recline half-submerged in the cooling waters. Having done it before, I am driven by the prospects of finding some spectacular fossils. This site always yielded surprises.
​
I was there with a dozen other “hominid” students from Columbus State University – Dr. David Schwimmer’s paleontology class – scratching into the 3-foot-thick storm/wave deposited contact zone between the Cusseta and Blufftown Formations. We are spread out across the north bank each a few feet apart.  My rock hammer hits a solid object; I slow down switching to a less aggressive tool. Scraping away the dark, shell-filled matrix, I spy a brown mass. Working it loose, it falls into my hand. I realize quickly it is a roughly ¼ pound block of brown amber. Later research confirms it is Jellenite an uncommon form of amber; a first reported from the Georgia Cretaceous. Dr. Schwimmer confirms the find. The envious student next to me says half-jokingly, “We are not inviting you again.”   My day of discovery would have been complete with that find, but there was more to come.
​
​As our field trip came to a close, Dr. Schwimmer signaled the group to begin packing up for the long uphill trek to our vehicle. I told him I would make a quick scan of the opposite bank around the bend; another productive spot. The section for the Blufftown Formation is at least ten feet thick. I made several probes with my hammer; a large chunk of matrix falls away. To my stunned eyes is a huge tooth! I immediately identify it as Deinosuchus, roughly 4 inches in length. I quickly returned to the team. Rounding the bend, I held the tooth high above my head smiling just as broadly as that tooth. Everyone stopped in awe. I was certain they would never invite me again. Dr. Schwimmer believed it to be the largest Deinosuchus tooth ever found at that site. Later to be confirmed the largest yet found in the southeast.

​I chose to keep the tooth in my collection; now displayed prominently in my library. Since then, I made 8 casts of the tooth and have shared those with paleo-friends, several universities and museums; one in Scotland. In time, it might find a permanent home at Tellus Science Museum where many of my best specimens are on display. If you go there take note of the Appalachiosaurus tooth. I found that a couple years earlier in the same location. Maybe it broke from the jaws of that ill-fated theropod on that warm summer day 75 million years ago.   Fun to speculate.

Every fossil tells a story.