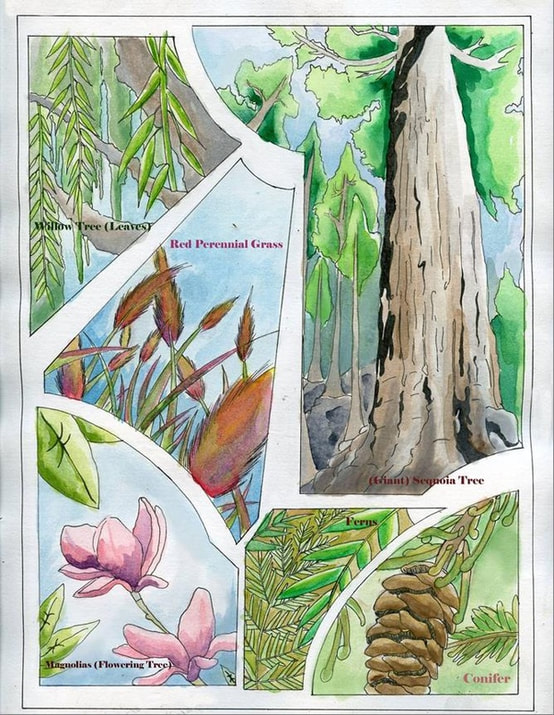 Broken Arrow Bend
Broken Arrow Bend is a small eastern point of Chattahoochee River about 1 mile south of where Upatoi Creek merges with the Chattahoochee. Veatch and Stephenson report that an exposure a couple of hundred yards long can be seen at the base of a bluff about 140 to 150 feet high. A fossil bearing bed is the second up from the base and is described as coarse, crossbedded sand and laminated clay containing pieces of petrified wood, large logs and small pieces of lignite (brown coal wood). Fossil leaves were found in a black lens of clay about 8 inches thick several feet above the water level. E. W. Berry identified the following plants from this location.

This is Edward W. Berry who was born in New Jersey in 1875 and started his career as an amateur scientist; he originally described and named many of these species.


Chimney Bluffs, Chattahoochee River
About 4.5 miles southwest of Cusseta, GA
This is Fort Benning property where Chattahoochee River makes it’s farthest eastern point in Chattahoochee County. The bluffs are eastward from the river point. The base bed of some bluffs about 5 feet high and shows dark, brown, coal-like, clay rich sand with black lenses of mica rich clay; lignite; as brown coal wood, is present in all forms from fragments to logs. Poorly preserved fossil leaves are abundant in some clay lenses.


Upatoi Creek
Within Fort Benning, at the Muscogee/Chattahoochee County line is a location known as McBride Ford, 11 air-miles south of east Columbus, where a bluff stands on the south bank of the river.

Cretaceous material underlies about 6 feet of unconsolidated sands as an irregularly crossbedded sand/sandstone with chocolate to black clay lenses, angular quartz pebbles, feldspar fragments, with recognizable wood fragments as coal (lignite) in some cases as logs. Some of the clay lenses contain leaf fragments. One such lens, 6 to 10 inches thick, produced a number of well-preserved Cretaceous leaves which were collected for identification.


Chattahoochee River Bluffs at Blufftown, GA
This town is extinct but was mapped by Veatch and Stephenson at about 4.5 miles northeast of Omaha at a sharp eastward bend in the river in Stewart County approximately 31.25 air miles south of Columbus. From the bluffs they reported a wealth of Cretaceous invertebrates, shark’s teeth, fish vertebra and crab claws.


Omaha Railroad Bridge
One eighth mile below the railroad bridge east of Omaha Cretaceous invertebrates and shark fossils were collected at a level 5 to 8 feet above the water.


Florence/Omaha, GA; (As Florence Marina on some maps)
Stewart County; where Georgia Highway 39C (running east-west) runs into Georgia Highway 39 (running north-south). There is (was?) a bluff about 45 feet high with Cretaceous invertebrates, shark and crocodilian teeth occurring at the lower five feet of the middle strata, which is about 20 feet thick. These sediments are a grey, to green, clay rich marine sands.


Buena Vista/Tazewell Road
Reported as along the Buena Vista/Tazewell Road (State Highway 137, Dr. Deryl Hart Road); there is a hill from Tazewell back towards Buena Vista with the hill cresting where power lines cross the road (modern description). The lower 50 feet of this hill, on the Tazewell side, is composed of coarse, light colored, crossbedded, feldspar rich sand locally with iron concretions; with white to black clay lenses. The clay lenses are local in character giving place over a short distance to sand. The black clay lenses are sparsely leaf bearing and have a thickness of 4 to 5 feet.


Byron, Georgia
At a point about 1.5 miles northeast of Byron in a railroad cut through an 18 foot high hill. The hill is crowned by a 5 to 8 foot layer of light gray to yellow, stratified, sand and clay of Cretaceous (?) age. Below this is a 10 foot layer of drab, layered, and laminated clay.  On the southwest end of the lower layer there is a six foot section of dark drab to chocolate colored clay containing Cretaceous plant fragments, these were collected and submitted to E. W. Berry

In 2012 Jay Batcha (Friend & Editor for the Mid-Georgia Gem and Mineral Society) and I tried to locate this Byron, Georgia location but the railroad cuts proved too overgrown. We located the hill crown but could not confirm fossil bearing sediments in a lower bed.


Renfroe’s Station
Stewart County, reported in several railroad cuts 1 to 1.25 miles north of Renfroe’s Station, which no longer exists. The City of Renfroe stands on the Chattahoochee/Stewart County line and here the railway (or former railway) diverts northeast from following Highway 280 and heads across county through hilly terrain. Fossils are reported as both vertebrate shark fossils & invertebrate material loose in soils of the rail road cut, having weathered out.

Ideal, Georgia
Reported in 1911 as a railroad cut 1 1/8 miles north of town, this may not be accurate or the original rail line may no longer exist. Current railroad is about 0.5 mile north of downtown in a series of side roads and bridges built around a low promontory where the railroad parallels Whitewater Creek. Three species of Cretaceous sharks, a mosasaur tooth and fragments of bone were recovered.


Artist Xavier Sims created these watercolors of Cretaceous plants to show a different Georgia than today; a tropical environment. 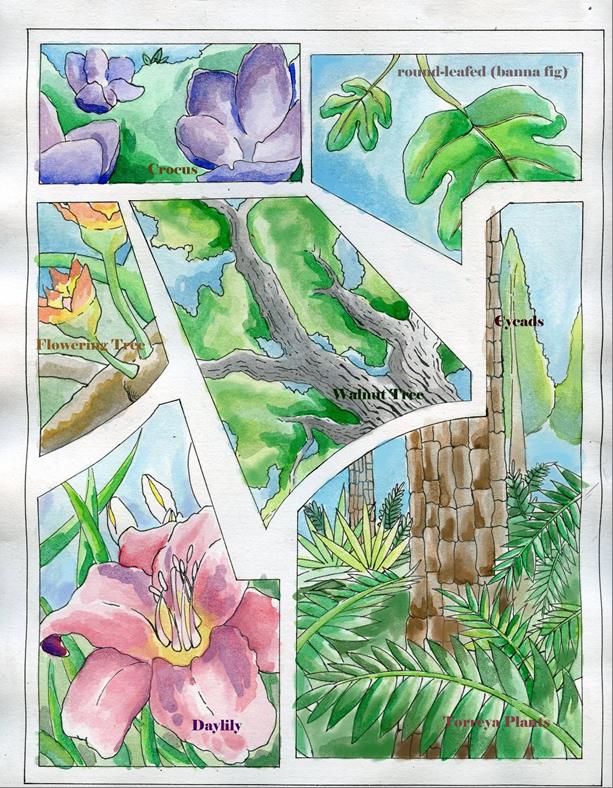