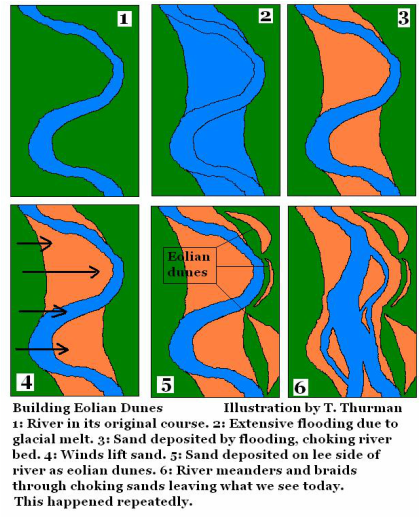 Along the north-eastern banks of many of South Georgia’s rivers there are unusual arched or parabolic sand dune fields, the largest single dune is more than 30 meters (100 feet) high, runs for 7.25 kilometers (4.5 miles) along the river and extends for a width 3.2 kilometers (2 miles) away from the river.

Along the Ohoopee River they form a continuous chain of sand dunes more than 80 kilometers (50 miles) long. Composed entirely of sand, these are structures which speak of large scale erosion, deposition and wind.

Crescent shaped, parabolic sand dunes are common in deserts like the Sahara, where there is an ample supply of both sand and wind, but to find them along rivers or streams in water rich parts of the world is very rare.

Georgia is rich in such rare dunes. 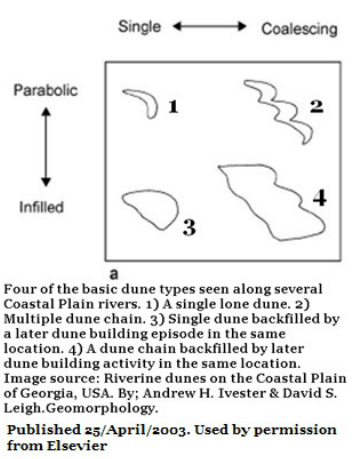 The parabolic shape is characteristic of a wind created dune, the term “eolian” means “carried or affected by the wind”. (Aeolian is also correct) The name originates from the Greek god of winds; Aeolus.

It would be strange enough if Georgia hosted just one set of such dunes, but where they do occur, they typically occur in sets. Additionally, they aren't along all Georgia rivers. This creates a need for an explanation.

There are series of dunes, varying in size and height, at different distances from a river, clearly showing multiple events of flooding at different levels. There is also stratification within the dunes, obvious evidence of multiple dune building episodes.

In at least one case, the furthest dune is more than a mile away from the modern banks.

There are multiple cases where one dune formed its arch, and at a later date a second dune in-filled the hollow of the arch to create a “D” shape. 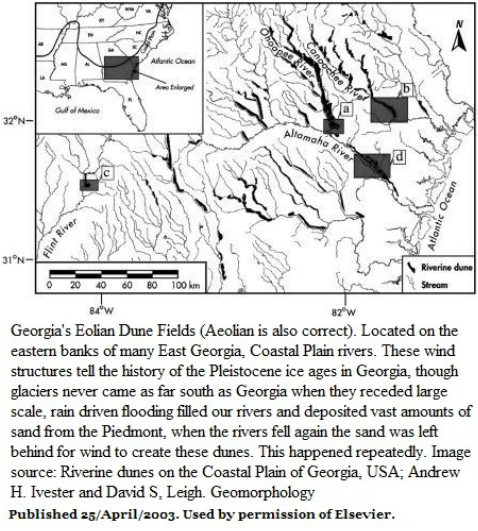 The dunes weren’t confirmed as eolian dune chains until the early 1970s when the first satellite images of Georgia became available to Georgia geologists.

Arguments about their origins continued through the 1970s, 1980s and 1990s with speculations even suggesting that Georgia had been a desert during the glacial maximums and the dunes forming as they do today in the Sahara.

This was quickly overturned as it was pointed out that if this was the case such dunes would occur everywhere on the Coastal Plain; they don't.

As early as 1911 they were recognized as Pleistocene, or ice age, structures. Veatch and Stephenson reviewed several of them and concluded that the sand had likely been deposited during ice melt driven floods and the dunes formed at least partly by wind action afterwards; they were absolutely correct. (29)

In 2002 Andrew Ivester with the State University of West Georgia and David Leigh with the University of Georgia investigated several of these dune fields and concluded that they were evidence of repeated cycles of severe river flooding of glacial melt from the retreating glacial fields.

The flooding had been caused by extended torrential rains; the exact opposite of a desert. The torrential were a product of glacial melt, but not directly. The Appalachian Mountains stand between Georgia and the parts of North America once ruled by giant glaciers. Rather, the melting glaciers helped create contemporary monsoon-like weather patterns for Georgia.

It was these rains which eroded the sand and caused it to be deposited in the river beds.

The sand originated from the weathering of mountains which had stood on Georgia’s Piedmont province, this became suspended in the fast flowing river floods of the flood plain.

As the flooding abated, vast amounts of sand were left behind in the river beds.

The sand, which has the consistency of sugar, drains water very quickly so it is difficult for plants to colonize and stabilizes the dunes.

Even today only drought resistant plants tend to be seen on many of the dunes. Recurring dry seasons during the ice ages left the sand vulnerable to the prevailing east blowing winds which lifted the sand to form these dunes.

Our strange eolian dunes tell us a little more about conditions in Georgia during the Pleistocene.