​15B: The Glendon Limestone
​Eastern Gulf Of Mexico Stratigraphic Association 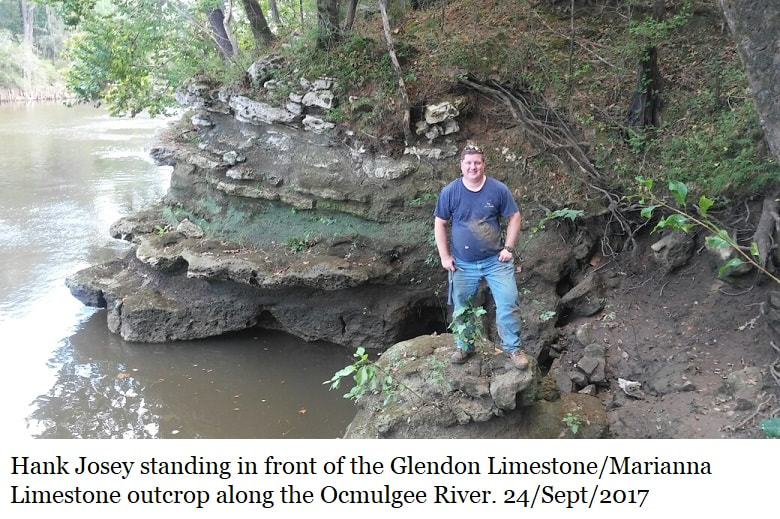 ​Prominently atop the Marianna Limestone (Section 15A) and at that same outcrop along the Ocmulgee River you’ll see Georgia’s only known occurrence of the distinctly layered Glendon Limestone. 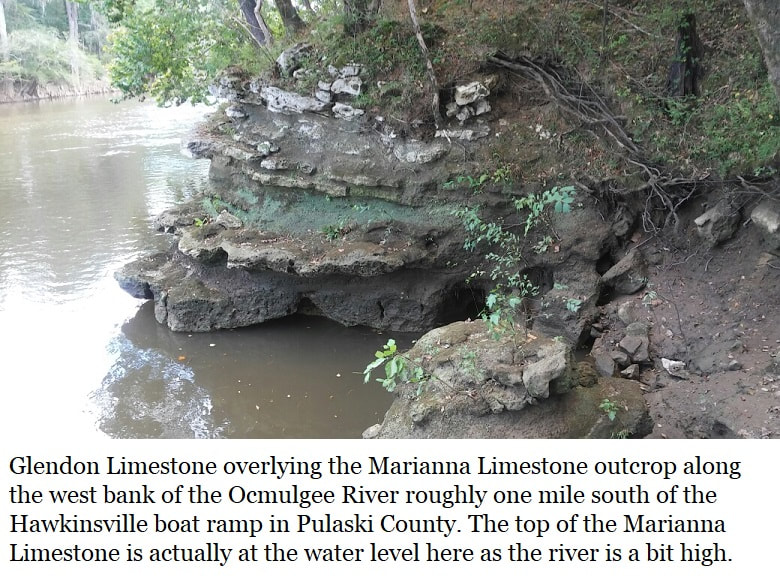 ​The Glendon Limestone was named, and the type locality set by C. W. Cooke in 1918 for Rupelian (Vicksburgian) Stage sediments of the Oligocene Epoch in a Clarke County, Alabama quarry which Paul Huddlestun reported 1993 as abandon and overgrown. The Glendon also occurs in Wayne County, Mississippi as well, where the Marianna Limestone underlies it as it does in Georgia. 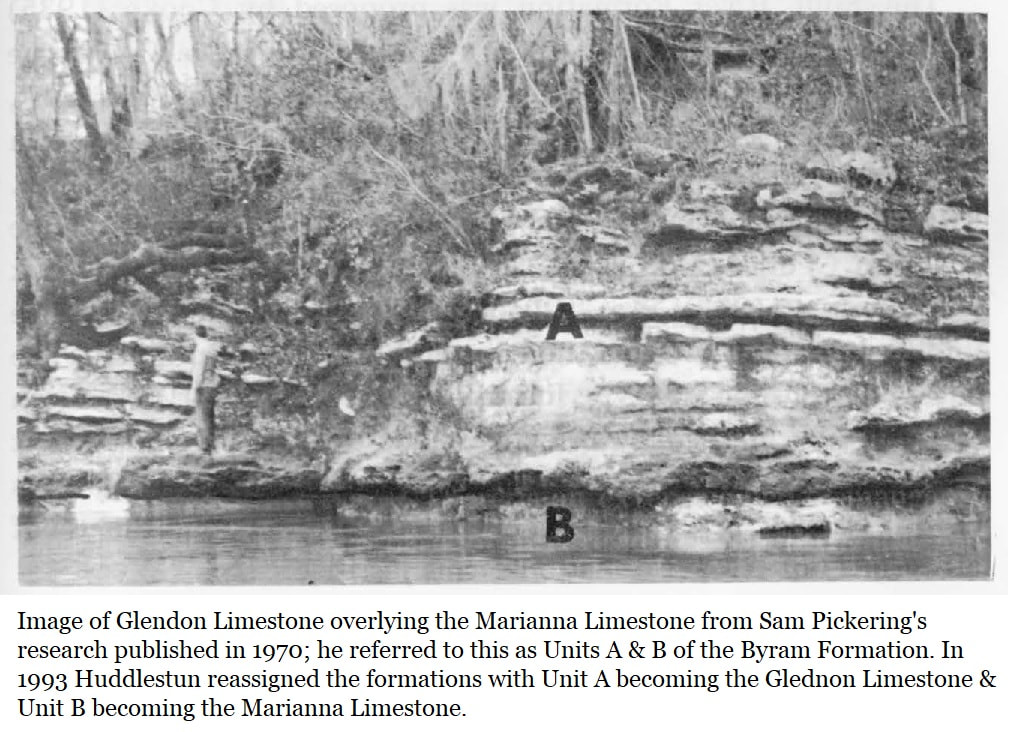 ​While rich in microfossils the Glendon limestone does not contain many fossils observable in the field. ​
​Huddlestun described the Glendon thusly in 1993:
​
“The Glendon Limestone on the Ocmulgee River consists of alternating hard and soft layers (ledges and reentrants) of limestone. The limestone in the ledges are partially recrystallized and consists of approximately 94 percent calcium carbonate (Pickering, 1970, p. 51). The limestone in the reentrants is argillaceous, silty, consists of approximately 70 percent calcium carbonate, and contains conspicuous carbonaceous material. The Glendon Limestone on the Ocmulgee River differs from typical Glendon Limestone in being very sparsely macro-fossiliferous, and it does not contain a significant number of Lepidocyclina as is characteristic of the formation in Alabama. The soft limestone, however, is abundantly micro-fossiliferous.”
​In 1970 Sam Pickering called the Glendon Limestone Unit A of the Byram Formation and described it thusly (For clarity I have substituted “Unit A” for “Glendon”);
​
“The rhythmic alternating nature of the (Glendon) lithology of suggests that environmental conditions fluctuated regularly during deposition, probably due to varying availabilities of clastic silt and clay. The base of each of the tan clay beds of (the Glendon) contains a very great abundance of fossil material indicating that probably the influx of silt and clay killed large numbers of organisms by clogging their breathing apparatus. Most of the fossil remains observed in (the Glendon) were in their approximate living positions, indicating a probable life assemblage rather than a sedimentary accumulation of miscellaneous fossil material. Corals were observed to be considerably more abundant in the lower bed of limestone than in any other part of the unit. This limestone bed is also the thickest bed probably indicating that deposition occurred over a longer period of time during which corals could become more firmly established.”
​While usually accessed by boat you can hike the river bank & reach the Glendon Limestone and on 24, September 2017 Hank Josey and I (Thurman) made this trek, the most strenuous section was crossing the steep banks of Mile Creek where we’d made observations of the Marianna Limestone.

​During our hike Hank Josey collected a sample of the hardened ledge which possessed a very nice Trochocyathus coral (see image), the hardened ledges are re-crystalized and our sample did not respond to acid. We did not test nor really inspect the soft re-entrants.

​Very few other fossils were evident but access from the river bank is difficult.
​Research by Pickering and later Huddlestun confirmed the Glendon to be of the Rupelian (Vicksburgian) Stage, Early Oligocene Epoch.
​In 1993 Huddlestun reported:
​
“The Glendon Limestone is Early Oligocene, Vicksburgian (Rupelian) in age. The only fossils that have been identified from the Glendon Limestone on the Ocmulgee River are all very rare and include Paraster americanus, fragments of an echinoid that appears to be Clypeaster rogersi, Lepidocyclina, and molds of the gastropod Xenophora (Pickering, pers. com., 1983). As reported, the meager fauna of the Glendon Limestone is consistent with a Vicksburgian age.”
​References;

​The Oligocene, A Revision of the Lithostratigraphic Units of the Coastal Plain of Georgia; Paul F. Huddlestun, Bulletin 105, Georgia Geologic Survey, 1993 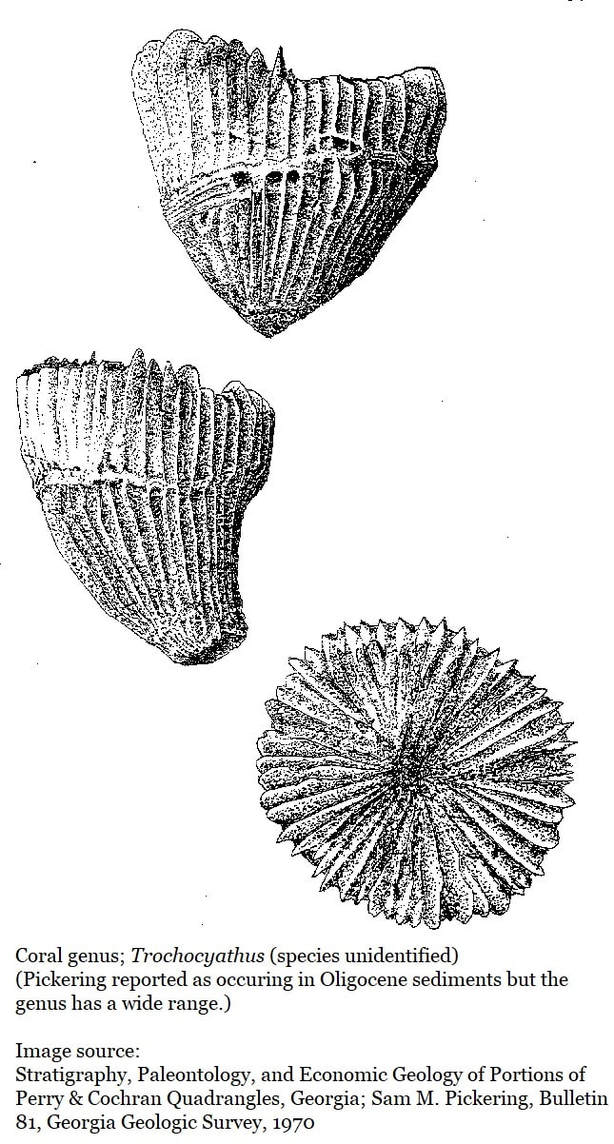 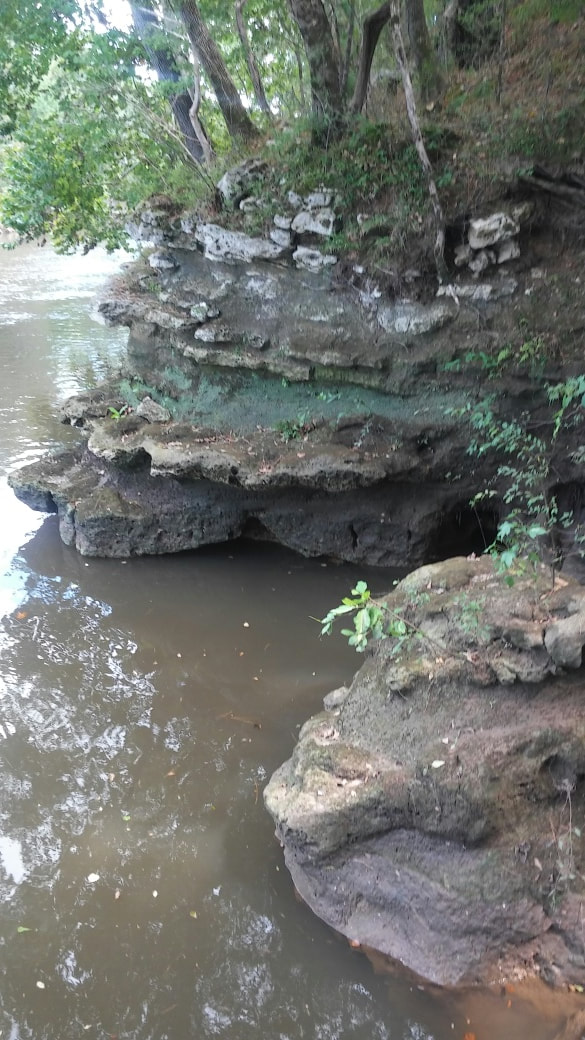