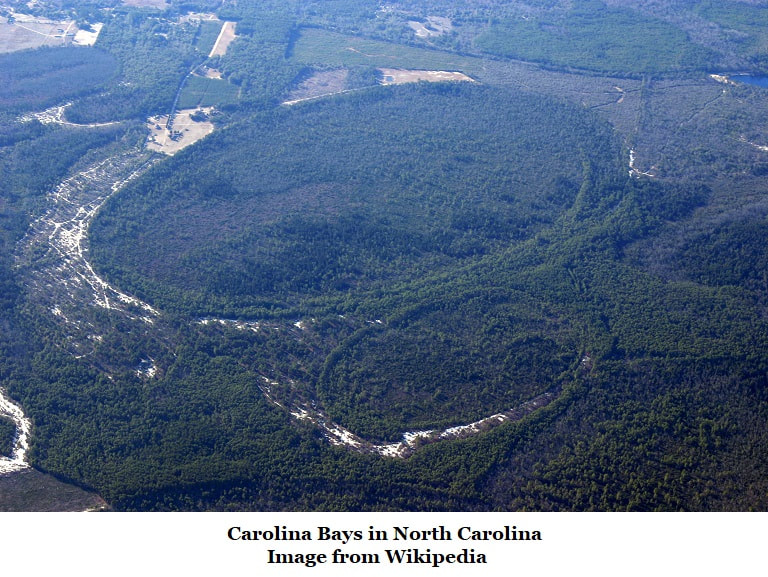 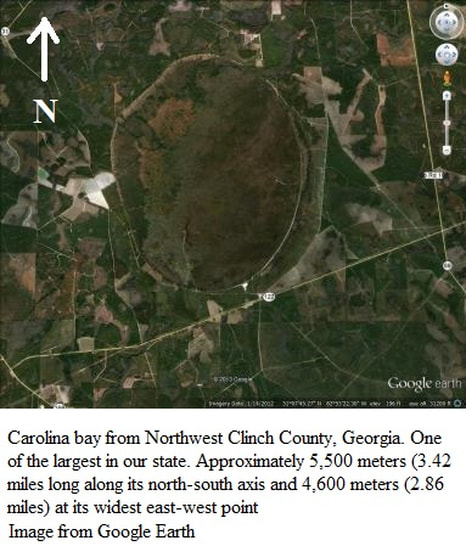 Consensus is one of the bedrocks of science, general agreement on a theory doesn't necessarily make the theory right, just plausible.
On Carolina Bays, even consensus is evasive.

​This is a genuine, persisting mystery which has yet to find a plausible, widely accepted explanation.

​The only thing most researchers agree on is that these are Pleistocene features.

To quote the 2002 paper; Carolina Bays of Georgia, Their Distribution, Condition and Conservation; by Van DeGenachte, E., and S. Cammack, which can be found on the Georgia Department of Natural Resources website: (52)

"Carolina bays are elliptical wetlands found along the Atlantic Coastal Plain that typically share a suite of features including an oval or tear-drop shape, orientation along a NW-SE axis, a raised sand rim along the south and east margins, a depth profile that often increases from the NW to the SE, and fluctuating water levels. 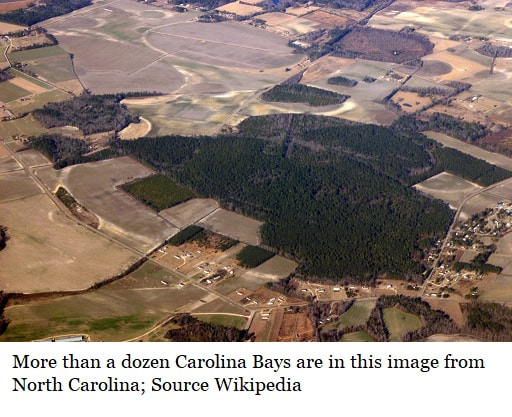 The uniformity of features found in Carolina bays has challenged theorists to propose a single mechanism for their development or creation. The challenge has spawned over a dozen theories on Carolina Bay formation ranging from the plausible (e.g. subsidence features and wind events) to the fanciful (e.g. extra-terrestrial landing pads and ancient fish spawning beds).

Ultimately, there is no single widely accepted theory for their formation. In the scientific community, the most popular theories are those that attribute a complex set of factors to bay formation and are typically based on affects from Pleistocene winds or storms and water flow. (Brooks et al., 2001)

Carolina bays are known in North Carolina, South Carolina, Georgia, Delaware, New Jersey, Maryland, Virginia and North-Central Florida. ​
​​They're oval depressions usually containing wetlands; many host species which are rare elsewhere so they stand as important wildlife refuges. About 500,000 bays are known along the Atlantic Coastal Plain; 528 are recognized in Georgia. A few occur in Georgia’s Piedmont region.

Pleistocene fossils are documented from some layers of many Carolina bays, as are human artifacts including Clovis material.


Impact Origins?
Theories supporting an impact origin of some kind have been entertained since the 1930s. This includes the airburst of a bolide with its debris being strewn along the Atlantic Coastal Plain and the Carolina bays representing weathered impact craters from this debris.

But there are strong arguments against this. The bays have produced little irrefutable evidence supporting an impact event; it’s hard to imagine an impact event capable of creating half a million craters that doesn’t leave other evidence.
​ 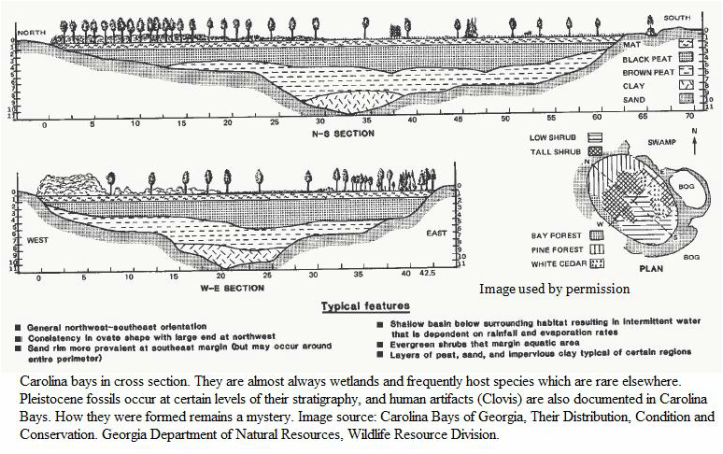 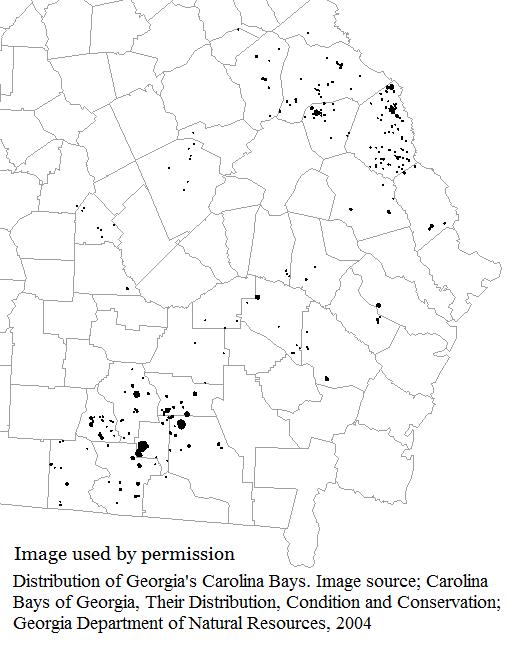 
One problem with this is that the subsurface sediments are wildly different beneath Carolina bays at different locations, so it gets difficult to believe the same surface conditions, or the same pattern of orientations would be seen from such different underground sediments.

Another theory states that the bays were created by ocean currents during high stands of sea levels.

Upwelling of ground water has been discussed.

Actions by wind (eolian) or lakes (lacustrine) have also been theorized.

Each theory presents its own host of issues.

Some have speculated that they began as mammoth wallows.

Despite the best efforts of many scientists the debate over their origin continues with no end in sight, as it has for nearly a century.

In spite of the ongoing mystery Carolina bays do represent important wetland features which should be protected; both for their value as wetlands and for the ongoing scientific debate over their origins.

To date, many Carolina bays have been destroyed for a variety of reasons; farming, road construction, development and drainage of wetlands.

​In April of 2017 Antonio Zamora published an article in Geomorphology speculating that Carolina Bays may have been formed by the secondary impacts of airborne glaciers blasted from the Laurentide Ice Sheet.

His abstract states, among other things...
"The radial distribution of ejecta is one characteristic of impacts, and the width-to-length ratios of the ellipses correspond to cones inclined at approximately 35°, which is consistent with ballistic trajectories from the point of convergence. These observations, and the fact that these geomorphological features occur only on unconsolidated soil close to the water table, make it plausible to propose that the Carolina Bays are the remodeled remains of oblique conical craters formed on ground liquefied by the seismic shock waves of secondary impacts of glacier ice boulders ejected by an extraterrestrial impact on the Laurentide Ice Sheet."

Essentially the argument is that there was a meteorite impact on the Laurentide Ice Sheet in North America's Great Lake Region. This blasted out glaciers as ejecta which were thrown in a parabolic trajectory about 700 miles, to exit and re-enter the atmosphere, fall on South Georgia and excavate small craters which erosion would later enlarge. (Of course such glacier would have to fall elsewhere too.)

My first argument against this is imagining a coherent airborne glacier surviving re-entry with enough mass to liquify the soil and excavate a crater of any size.

It has also been argued that there is no mystery at all... That the Carolina Bays are natural features along the wind whipped edges of ice sheets. In defense of this argument one researcher posted the below image of melt- lake on permafrost.
​ 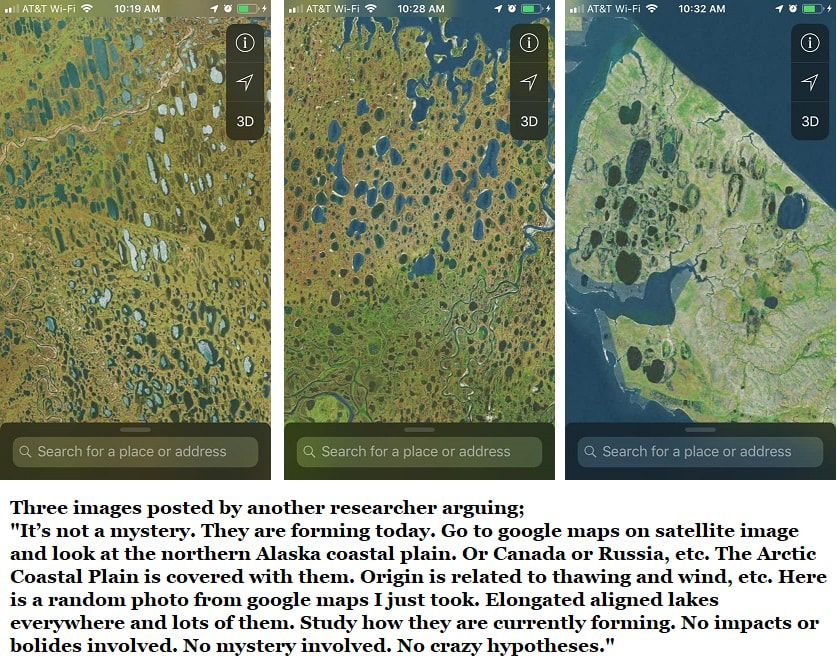 But do these modern glacial melt features really match Carolina Bays in shape, distribution, or alignment?
​ 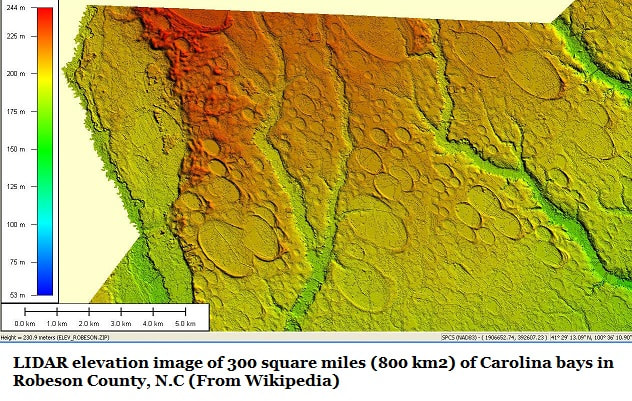 Here are Mr. Paul's comments from that paper;

Carolina Bays are elliptical, or spoon-shaped, wetland depressions that are aligned roughly north-northwest --south-southeast (Prouty, 1952). They occur across all of the Valdosta atlas area but are very rare west of the Withlacoochee-Little Rivers. There are four clusters of Carolina Bays in the Valdosta atlas area: a rather diffuse cluster in eastern Lowndes County, a tight, small cluster of large bays near Lakeland, a cluster of bays near Adel, and a cluster in Berrien County between Nashville and Willacoochee.

The bays are wetlands and are commonly filled with swamp deposits. Some Carolina Bays are completely, or in part, water-filled and are now lakes. Within the Valdosta atlas area there may be as many as 100 Carolina Bays.

The origin of Carolina Bays has been controversial. There have been two kinds of postulated processes for their formation: terrestrial and astronomical, i.e., a meteorite
swarm infall (for a complete discussion of the various postulated origins, see Prouty, 1952.

Prouty (1952) dismissed all of the proposed terrestrial origins and showed that all of the characteristics of the bays and bay fields can be explained through a swarm of incoming meteorites (similar to the breakup of Cornet Levy-Shumaker and the impact of the various fragments of the cornet on the planet Jupiter in 1994) at an angle of 30° to 35° to the horizontal.

The reason the meteorites did not produce typical meteorite craters is that the meteorites were small and the excavation of the bays was caused by atmospheric shock waves (similar to the Tunguska event in Siberia in 1908) accompanying the meteorites, which produced much larger depressions than the primary craters.

Prouty (1952) believed that the various proposed terrestrial origins for Carolina Bays are untenable.

He pointed out that there are no known geological processes capable of producing their consistent geometric shapes and consistent orientations across much of eastern North America. All of their characteristics can be explained by meteoritic impact on flat sand surfaces without regard for the many different kinds of underlying stratigraphic associations.

Yet, despite these 1997 observations... there is still no consensus among researchers.

Carolina Bays of Georgia, Their Distribution, Condition and Conservation; by Van DeGenachte, E., and S. Cammack; 2002