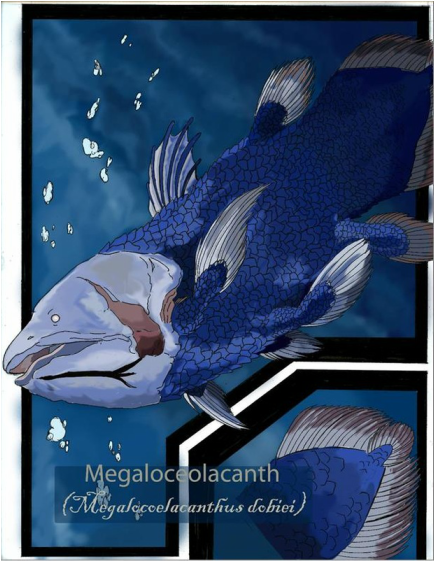 A giant bony fish. A new species from Alabama and Georgia.

Beyond sharks and crocodylians, bony fish are also present in the Hannahatchee Creek fossil record; gar, bowfins, and the odd looking saber-toothed Enchodus petrosus are all well known.

There were also giants like Megalocoelacanthus dobiei (pronounced: mega-low-see-la-kanth-us dough-bee-ee). This is a new species Schwimmer’s team discovered and named from a wealth of fossils found in Alabama and Georgia.

Oddly, because of the large size of the remains many specimens housed in collections went unidentified or misidentified until a large mass of fossils from a single individual was found and confirmed as a new species.


Artist Xavier Sims created these compelling images of Megalocoelacanthus dobiei.  The Fish is believed to have fed in much the same manner as a modern giant grouper, through displacement of water, or essentially suction. Opening its large mouth a great volume was water is pulled into its maw, along with whatever prey happens to be too close to escape. Xavier has shown our predator stalking a three foot shark from behind then taking it in one great gulp. I’m grateful grateful for Xavier’s superb work.
The Coelacanth fish family is famous as a “living fossil” thought to have gone extinct with the dinosaurs until a live specimen (of another species) was caught in 1938. Several additional specimens have since been caught and these fish have been filmed live in their habitat, YouTube has video clips.

Coelacanths emerged into the fossil record more than 300 million years ago. They are lobe finned fish, (Class: Sarcopterygii) which means that their fins are attached to the body by fleshy stalks supported by bone. This fin structure is not seen in other classes of fish; the distantly related coelacanths and lungfishes are the only living fish with lobe fins. 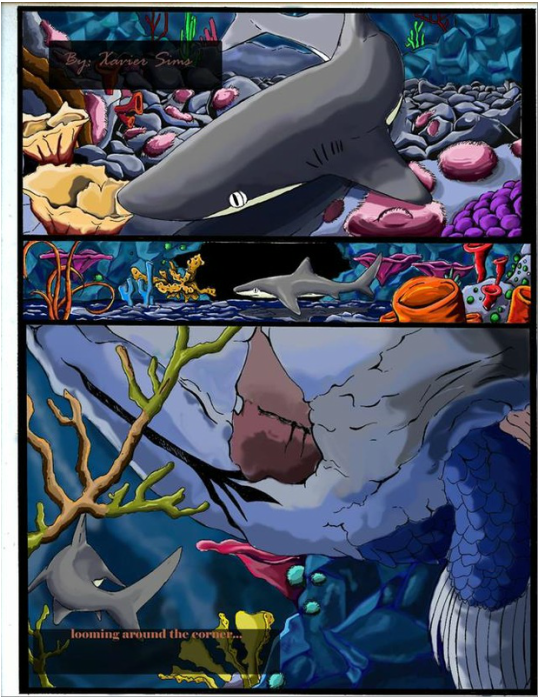 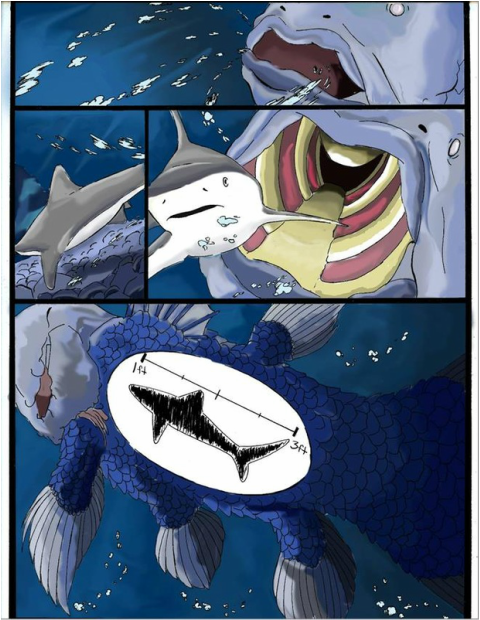 Large specimens of the modern coelacanth species run about 1.6 meters ( 5.5 feet) long so Megalocoelacanthus dobiei, at 3.5 meters (11.5 feet), were true giants of their kind.

The coelacanths in general are also interesting in the fact that like the goblin sharks we discussed earlier; once there were both deep water and coastal/shallow water species. Today only deep water species remain.

Reference:
Megaloceolacanthus dobiei from research paper, coelacanth information in general both from same paper and Wikipedia.