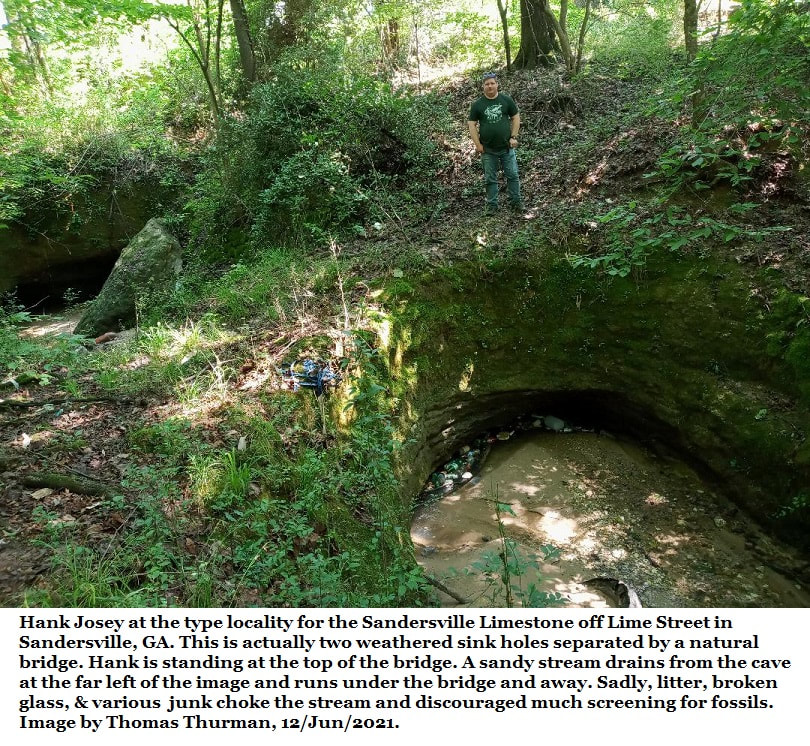 The Sandersville Limestone Member is small geologic unit restricted to Washington, Jefferson, and Burke Counties in east central Georgia.  It is the basal unit of the Tobacco Road Sand Formation and dates to the Upper Eocene, Priabonian (Upper Jacksonian), about 33.9 million years old.  It is abundantly fossiliferous with a great variety of both invertebrate and vertebrate fossils. 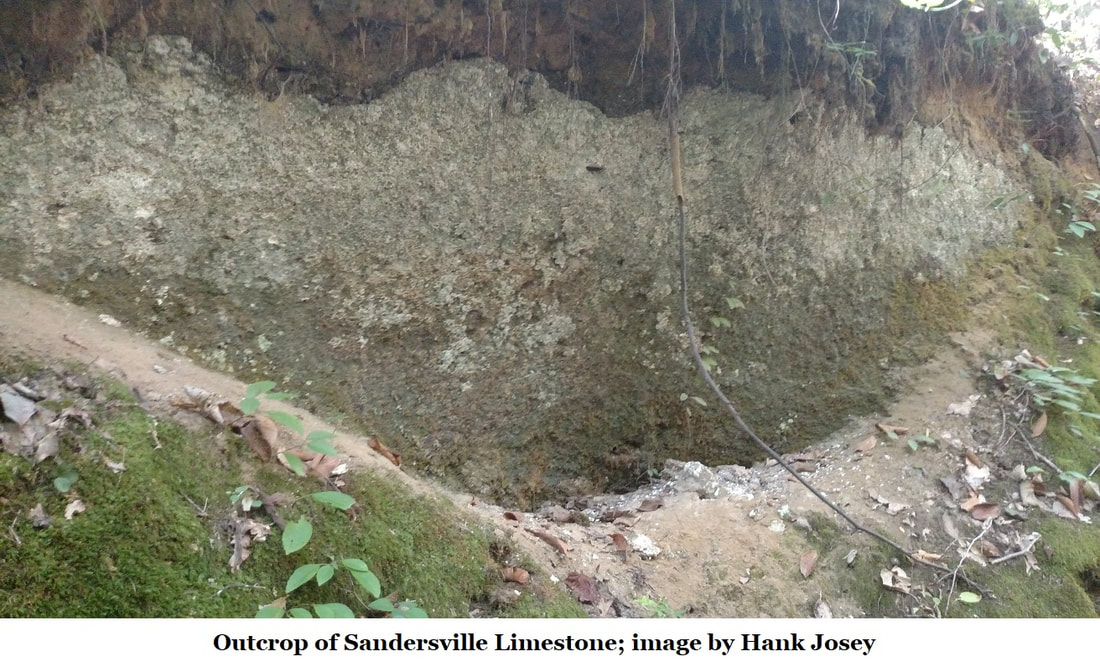 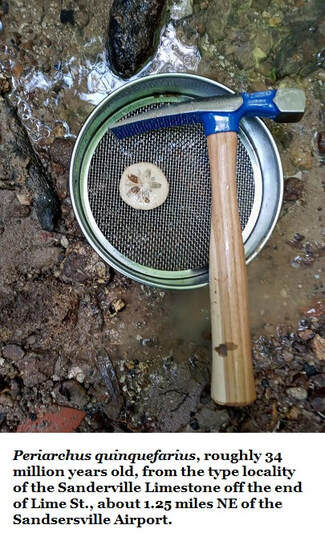 ​Historically, the Sandersville Limestone has been well studied.  Veatch and Stephenson (1911) described it as part of the McBean Formation and remarked about the abundance of “lime biscuits” found in the area (fossils of the late Eocene sand dollar Periarchus quinquefarius kewi).  Analysis of the limestone by Brantley (1916) showed that it is a pure limestone, being 92 – 93% pure calcium carbonate.  Cooke and Shearer (1918) moved it to the Barnwell Formation.  Huddlestun and Hetrick (1986) assigned it as the Sandersville Limestone Member, a basal unit of the Tobacco Road Sand Formation. 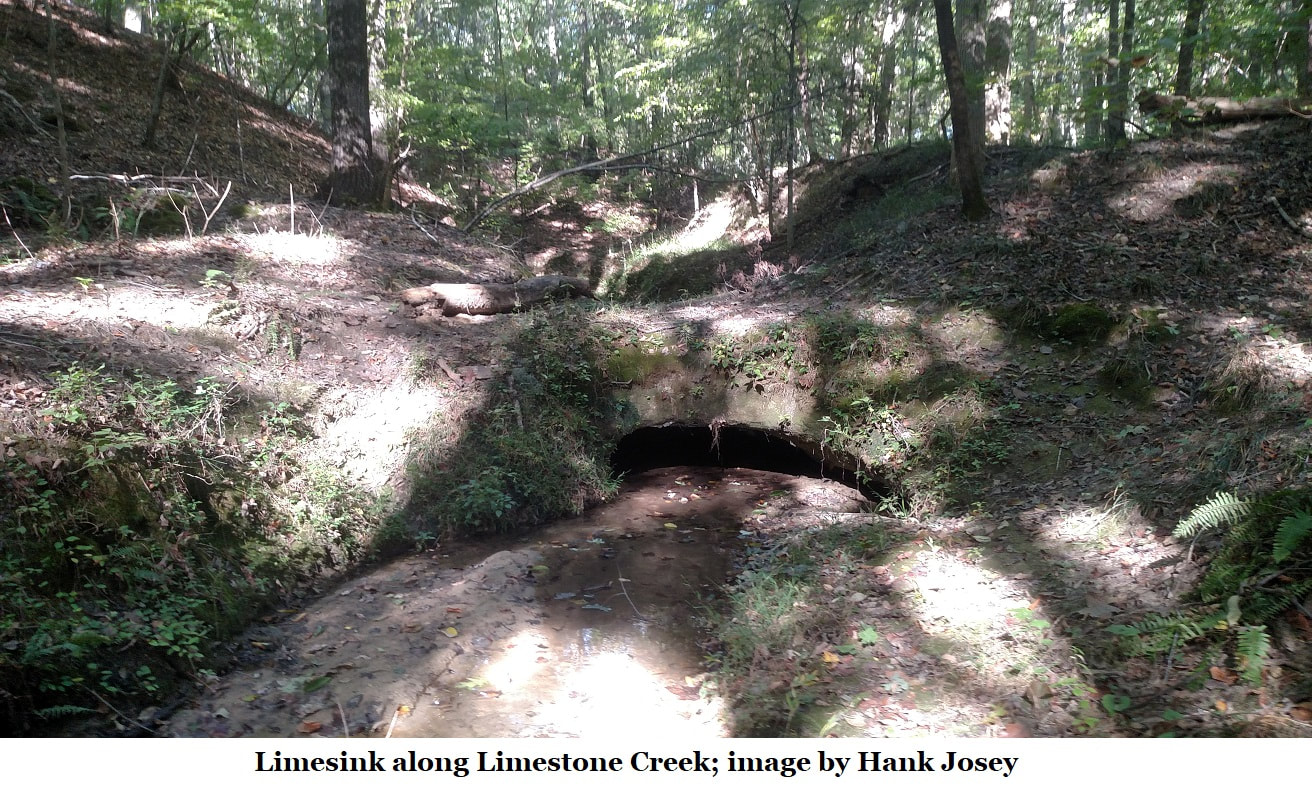 The area around central Washington County is abundant with sinkholes, resulting from the dissolution of the soft Sandersville Limestone by groundwater.  As the limestone is dissolved, the space created collapses under the weight of the overlying material. The ground beneath Sandersville is riddled with caves and passages, some extending for almost a mile.  Sinkholes led to closure of several streets in 1923.  In the 1930s, a local barn was also swallowed by a sinkhole.
​
​Veatch and Stephenson also described an extremely fossiliferous outcrop at Old Towne in southeastern Jefferson County.  Additional outcrops have been identified around Brier Creek in southern Burke County.
​ 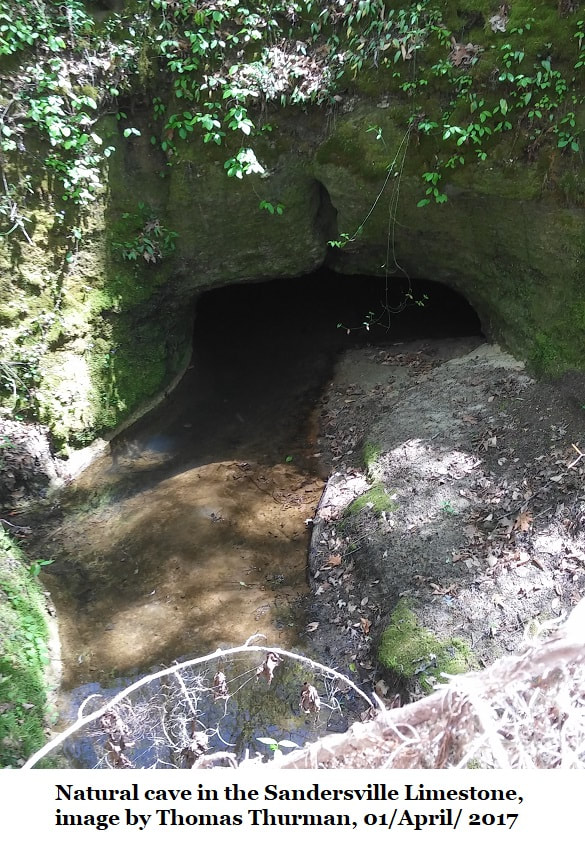 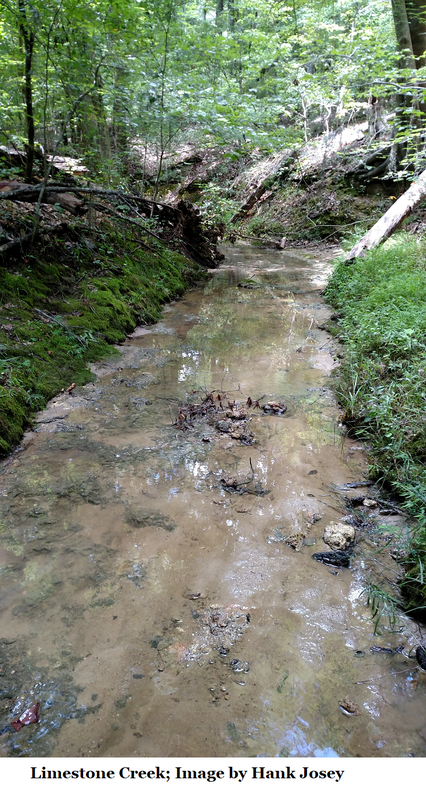 ​The type locality is in a small sinkhole located at the end of Lime Street in Sandersville at N 32o 58.365’, W 82o 48.924’, roughly 0.8 miles south of the Washington County court house. When the author visited this locality in October 2016, the area was severely blighted and the lime sink and the creek feeding it were choked full of garbage, old tires, and refuse (the author advises extreme caution as this neighborhood is very unsafe).  Fortunately, recent utility work by the city exposed numerous specimens of Periarchus quinquefarius kewi and the author collected a shoebox full in an hour.  These specimens had worn free of the surrounding limestone matrix and were remarkably well preserved, requiring only light cleaning with a Dremel tool. 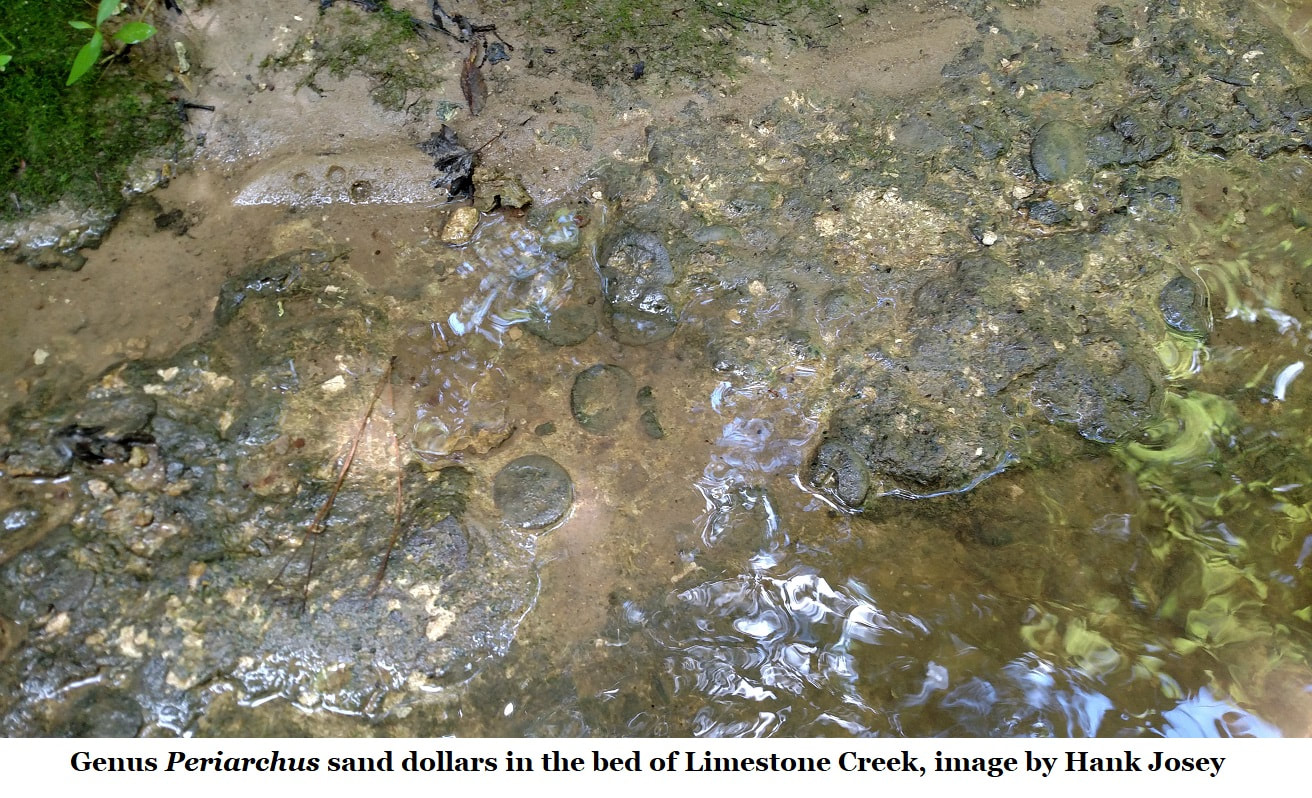 ​Additional outcrops are visible in the lime sinks south of Sandersville near Tennille.  In the bed of Limestone Creek on Industrial Road, approximately 0.5 miles south of Kaolin Road, the Sandersville Limestone is visible, including an extensive bed of Periarchus quinquefarius kewi in living positions.  The top of the unit is visible in a road cut at the location with multiple specimens of Crassostrea gigantissima.  These are silicified and few are whole. They are not nearly as large as specimens of the same species from Griffin’s Landing on the Savannah River.
The following list, drawn from a review of the literature and from the author’s personal research collection, describes the species know from the Sandersville Limestone. 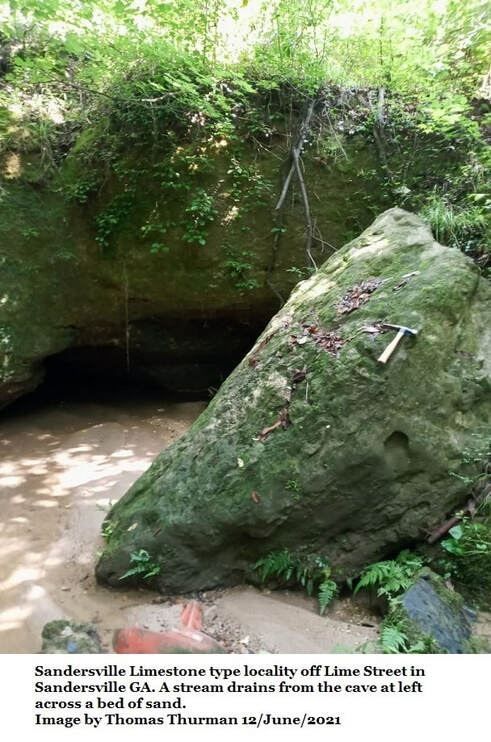 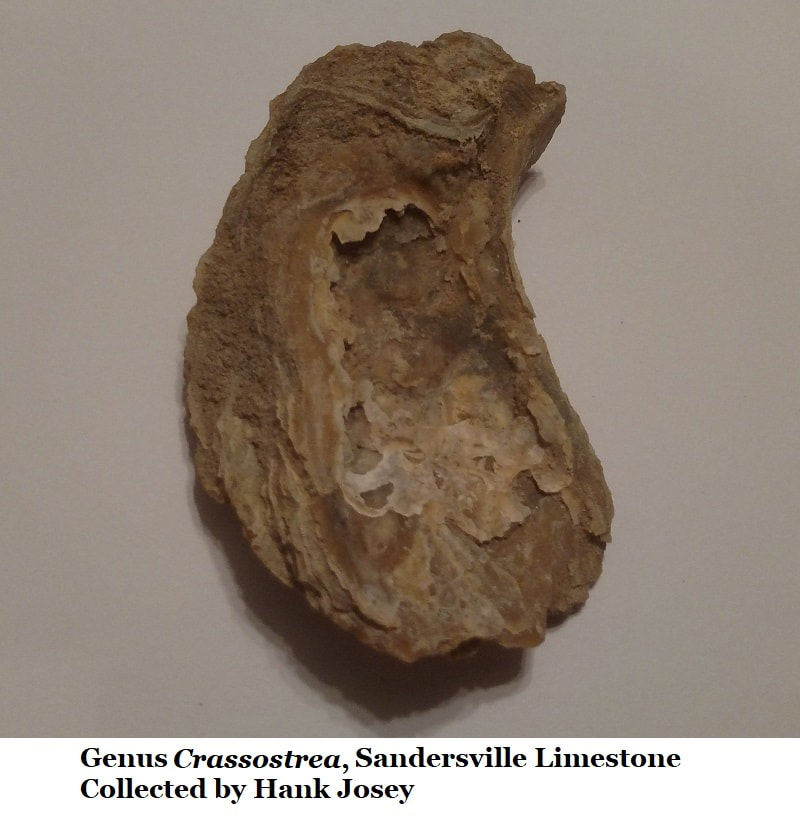