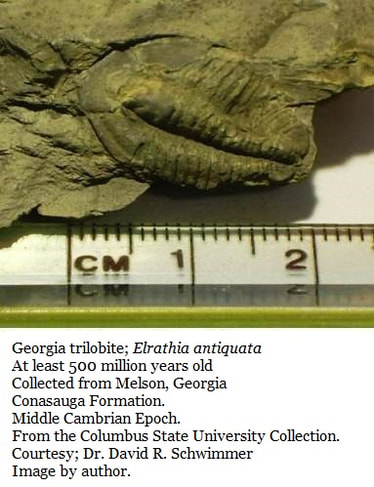 Trilobites have long been collected in Georgia’s Appalachian Ridge & Valley Province along the Coosa River in Floyd County. 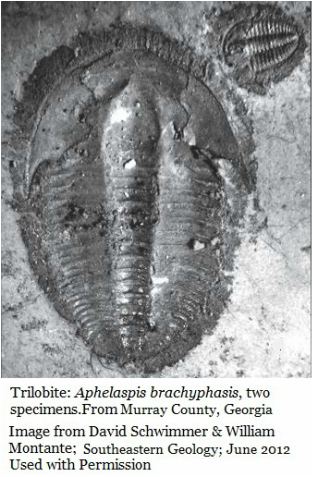 The trilobites, including larger species, occur and preservation can often be superb due to conditions at the time the sediments were deposited. In some cases soft tissue and the finest of filaments are recorded in the rock.

Trilobites are among the oldest and most enduring class of animals, emerging into the global fossil record at about 521 million years ago and persisting until great Permian–Triassic extinction about 250 million years ago. At least 17,000 species are known globally throughout their range in geologic time.

In July 1989 Dr. David R. Schwimmer of Columbus State University published a paper entitled Taxonomy and Biostratigraphic Significance of Some Middle Cambrian Trilobites from the Conasauga Formation in Western Georgia, this paper appeared in the Journal of Paleontology. 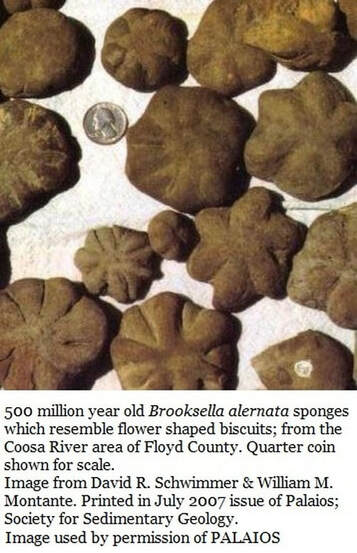 ​In 2007 these Cambrian deposits were revisited by Dr. David R. Schwimmer and William (Bill) M. Montante to show that trilobites weren’t alone in these waters.

​Other strange fossils include Brooksella sponge which resembles flower shaped biscuits complete with petals.
Hyoliths are present but we don’t really know what they were beyond soft bodied animals with conical shells that don’t resemble any living animals. It's currently believed they're related to brachiopods. They left a good fossil record in the genus Haplophrentis; hyoliths emerged into the fossil record 540 million years ago and also went extinct during the great Permain-Triassic Extinction Event more than 251 million years ago. Brachiopods are also present in the Conasauga Formation.
​ 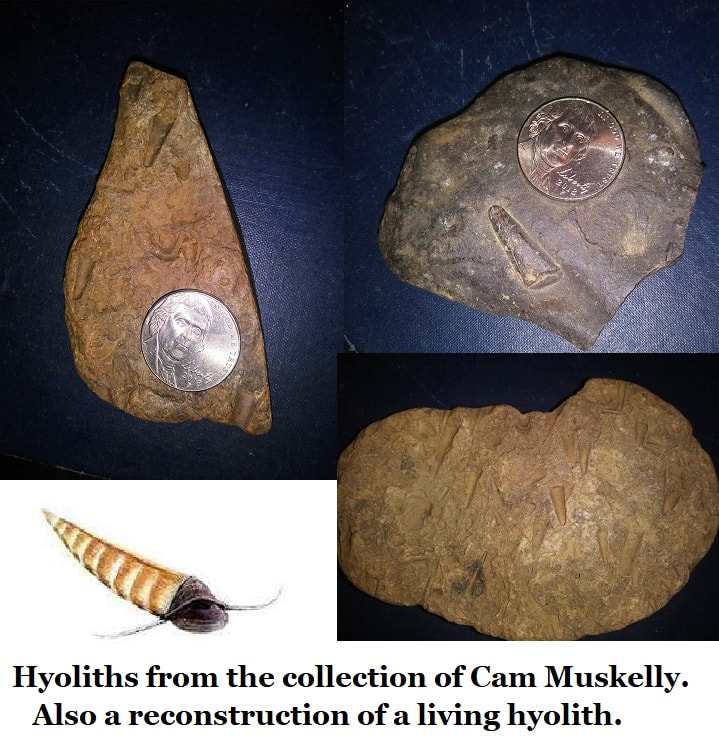 
In 2012 David R Schwimmer and William (Bill) W. Montante teamed up again to announce finds from two newly confirmed Upper Cambrian Period outcrops further east into Georgia along the Conasauga River in Murray and Gordon Counties. This was published in the June 2012 edition of Southeastern Geology.  These sediments are slightly younger than the Coosa River outcrops in Floyd County.

Locality 1 is an outcrop in Murray County. The matrix is mudstone and the researchers report “very abundant specimens” of Aphelaspis brachyphasis often as body clusters.

In a May 2016 message Bill Montante added; "During the Cambrian, what is now Georgia was on a long low sloping continental shelf (beach was roughly where Iowa is today) of the Iapetus Ocean".

​​A Global Perspective
When Georgia’s trilobites lived during the Middle Cambrian Period, more than 500 million years ago, Georgia was the floor of a shallow sea and there were no bones, trees, insects or enameled teeth (such as ours) on all the Earth.

Vertebrates were as yet unknown; simple chordates, which would lead to vertebrates, had just emerged in the Cambrian Explosion and were present in a very basic form. A skull-like structure was present, though jawless, and a hollow tube of cartilage serving to protect their notochord (see: Haikouichthys). However, the earliest vertebrates; fish, would soon appear.

​Simple marine plants were present, but landscapes were barren of green life. Biological films and micro biological mats could be found in tidal flats and perhaps beaches. Inland there were only lichens and fungi.

The Appalachian Mountains, one of the oldest mountain ranges in the world today, was still hundreds of millions of years in the future. Georgia was even in a different place, due to plate tectonics (continental drift) it was deep in the Southern Hemisphere. 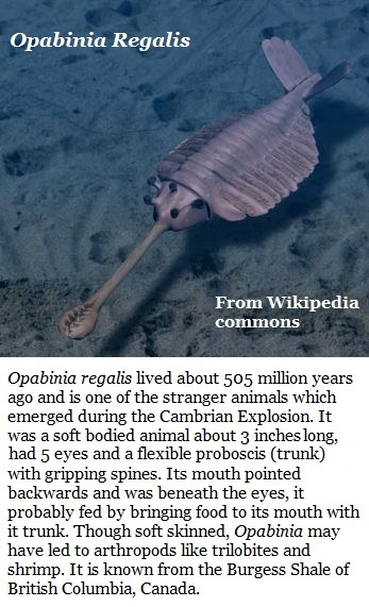 Cambrian Explosion
All modern advanced life can be traced back to the Cambrian Explosion. The term Cambrian Explosion was coined by Stephen Jay Gould (1941-2002) and occurred roughly from 530-520 million years ago. Multi-celled life diversified and radiated wildly, setting many basic patterns which would endure and eventually lead to the forms we see today, including us.

Primitive life on Earth can be confidently traced back to 3.5 billion years ago, right to the point where the Earth had stabilized enough to support large bodies of standing water.

​Primitive life on Earth can be confidently traced back to 3.5 billion years ago, right to the point where the Earth had stabilized enough to support large bodies of standing water.

​​Charles Darwin is famous for his work on evolution. Darwin was essentially an amateur researcher with no formal scientific training; his “ordinary” degree was geared towards becoming a parson, or preacher.

He was intensely interested in nature; fortunately for us he came from a wealthy background. Also, fortunately for us, he lived in a day when the study of nature was considered a worthy and prestigious pastime for gentlemen of wealth. (Darwin could never be described as a gentleman of leisure.)

Darwin didn’t discover evolution; the theory was well known long before his time, but no one could see how evolution worked. Darwin discovered Natural Selection; this is the theory that nature challenges each individual’s capabilities and those which possess an advantage, no matter how small, tend to be more successful.

​Darwin was looking at how species emerge, or where they come from; he was looking for the origins of species. He didn’t find it. What he did find and define was descent with modification. He saw that Natural Selection has been active since the beginning of life. His theory does not address the origins of life, rather why and how it diversified afterwards.

Evolution operates on the level of the individual. Individuals who possess some advantage, no matter how small, tend to produce more offspring.

If this advantage is genetic, the advantage gets passed to following generations.

The Cambrian Explosion was triggered by a wealth of simplicity. When the most advanced life forms are simple multicellular animals and plants, a single predator with a minimum of adaptations, becomes a terror feeding freely on the hordes.

All of this began in the world’s oceans, a big place with a wealth of environments and very little isolation.
For a period evolution drove a level of change never before seen on planet Earth, this is the Cambrian Explosion.

And since the only advanced life on Earth was in the seas all of that change quickly spread globally. What we are today began during the radiation of new species in the Cambrian Explosion.

At about 510 million years ago the first plants colonized land, but these were very simple organisms unable to survive far from water. By 400 million years ago plants had developed their familiar roots, leaves and woody branches. By 360 million years ago seeds had emerged and forests of tall trees were present. The first flowering plants (angiosperms) didn’t emerge until about 140 million years ago and began to replace the more primitive conifers in most environments around 100 million years ago.
​
References:
The particular trilobite specimen shown in the photo is from the Columbus State University Collection; the author photographed it with David Schwimmer’s permission and Schwimmer positively identified it in a personal communication. For further information on Georgia trilobites and Middle Cambrian fossils see

Taxonomy and Biostratigraphic Significance of Some Middle Cambrian Trilobites from the Conasauga Formation in Western Georgia. David R. Schwimmer. Journal of Paleontology, Vol.63, No.4, 1989. The Paleontological Society