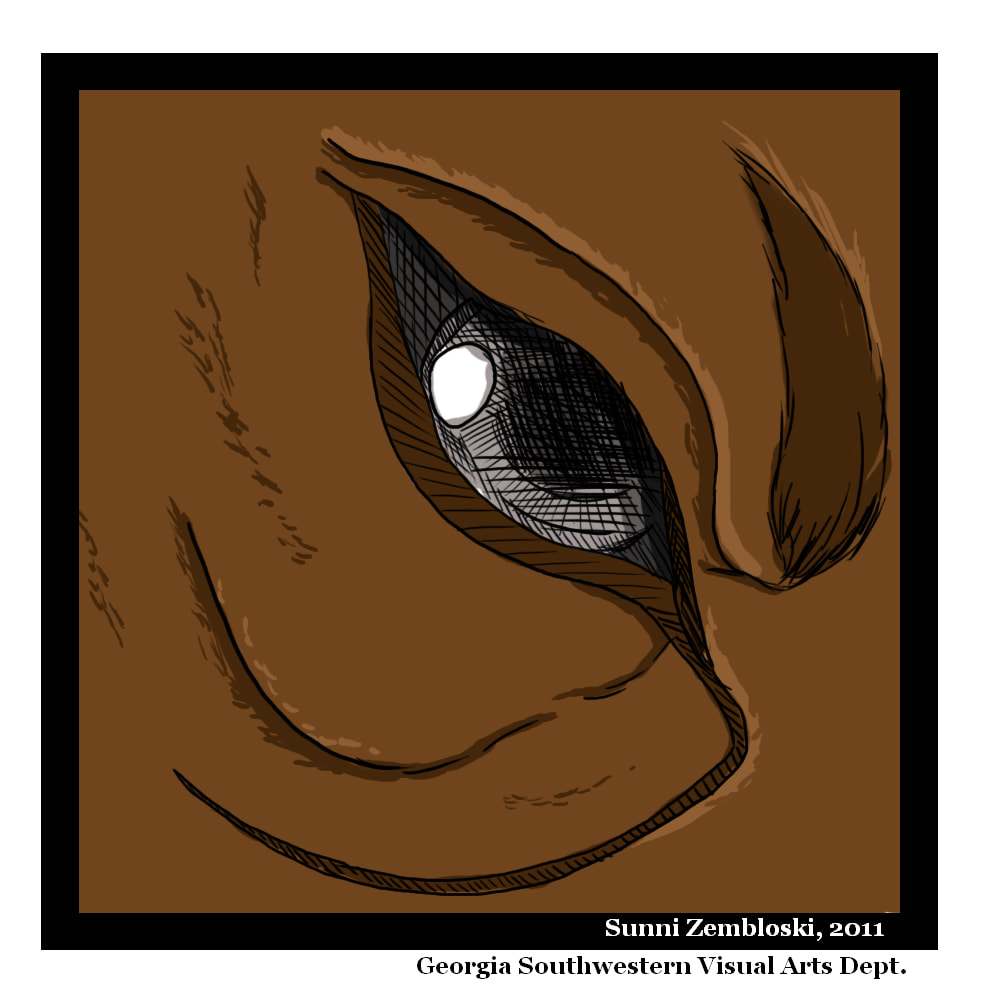 Terminator Pigs (The Entelodonts)
In 1969 Dr. Michael Voorhies, who at the time was a paleontology professor with the University of Georgia received what was thought to be a worn manatee tooth from the Tivola Limestone of Twigg’s County, Georgia.

Dr. Voorhies reported that the tooth was collected by experienced amateur Bill Christy from Huber Mine’s Pit 22. (Huber Mines in this location are now owned by Kamin Performance Minerals, but Pit 22 is long reclaimed & returned to the owners.) 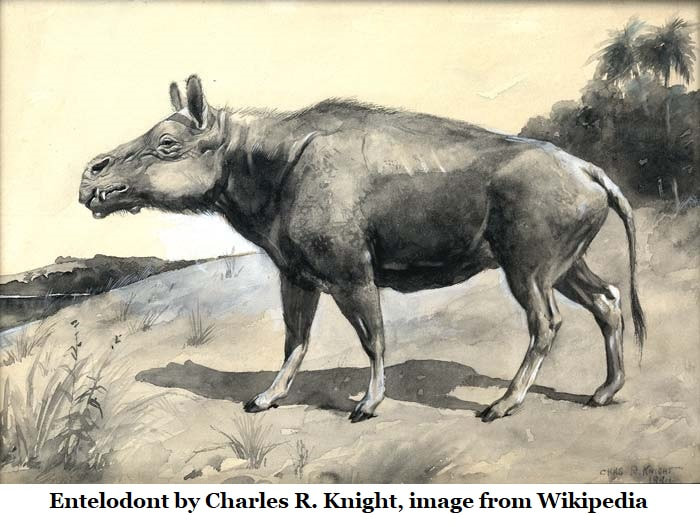 ​
Sadly, this important scientific specimen seems to no longer exist. Repeated inquiries concerning this fossil, & others Voorhies collected, were submitted to both UGA's Geology Department & Georgia Museum of Natural History at UGA. These requests have either been ignored or earned replies that they are not in, nor the responsibility of, "...this Department".

Former students have reported that UGA's vertebrate fossil collection got scattered, decades ago, across many classrooms as loaned-out teaching aids and were subsequently misplaced, discarded, or lost. If true, this is shockingly poor behavior for such a well funded and scientifically active institution.
​ 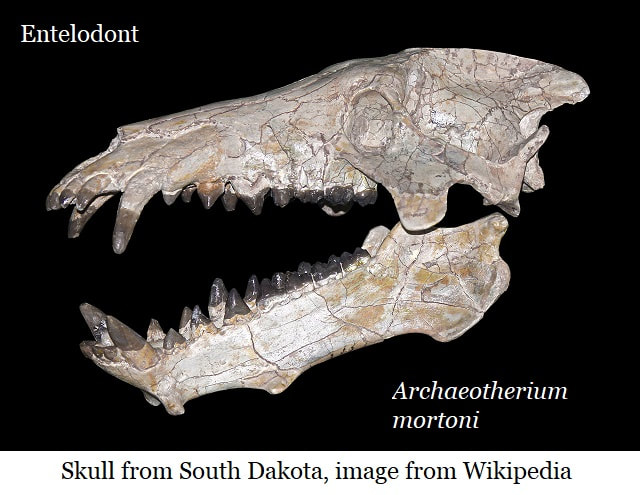 In 1982 researchers Daryl P. Domining, Gary S. Morgan and Clayton E. Ray from the Smithsonian Institute were studying early manatee (Order: Sirenia) fossils. As relatives of elephants they were trying to correlate how, where, and when manatees returned to the sea 50 million years ago. They’re the only fully marine, mammalian herbivores.

The researchers requested an opportunity to review Voorhies tooth. Upon studying the specimen, they explained that they believed this to be a deeply worn entelodont (terminator pig) tooth from a mature, even aged animal. Not a manatee fossil at all.
​ ​​

​The quote from the Smithsonian paper reads as follows:

Dr. Voorhies kindly lent the deeply worn tooth, UGV-41, for study, and after considerable difficulty in interpretation, we concluded that it compares most favorably to upper right first or second molars of entelodonts (including Achaenodon).
​
It is worthwhile to note that Achaenodon is genus of a hoofed, even-toed ungulate similar to a pig and related to entelodonts, but Achaenodon is not an entelodont.

Described as looking like a cross between a bear and a tapir Achaenodons are considered to be a grazer-browsers but is not hunters.
​ 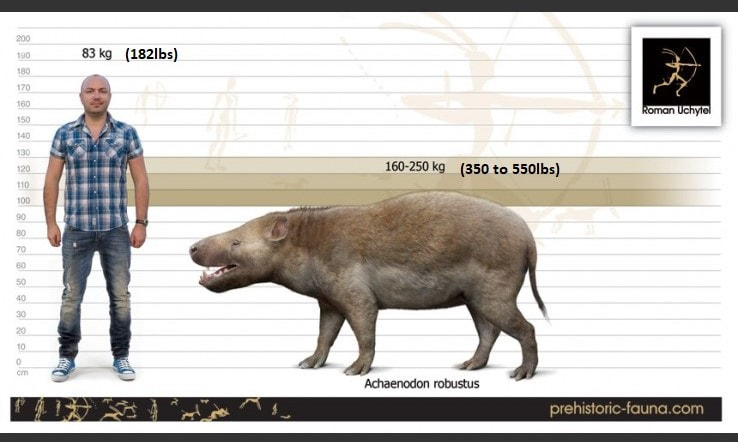 ​Entelodonts are known to have been omnivores and there is evidence that they hunted. Achaenodon has been reported from several locations of the American west and dated to from 46 to 38 million years ago. I am aware of no Georgia record for Achaenodon

Upon review, Dr. Voorhies agreed with the entelodont identification. His early mistake is very understandable as this was the very first entelodont fossil Georgia had ever produced. The find was completely unexpected.

A recent email from Dr. Gary S. Morgan who participated in the 1982 Smithsonian siren research confirmed this story. Dr. Morgan is currently Curator of Paleontology for the New Mexico Museum of Natural History.
​

Dr. Morgan reports that later field research by University of Georgia scientists recovered additional entelodont fossils in both the Tivola Limestone and the overlying Twiggs Clay formation; terrestrial vertebrates were recovered from a lens of sandy red clay 50ft above Twiggs base. This confirmed the presence of a population of entelodonts in Georgia 35 million years ago.

Several attempts to get more information about the recovery of additional entelodont, or any vertebrate material, from the University of Georgia (UGA) were unsuccessful. Nor has any official report or published paper of entelodonts recovered the Twiggs Clay been seen or made available for review.

Their fossils are very well known, studied, and represented in western North America. They are also known from Europe and Asia.
​
Though similar in appearance, they are only distantly related to modern pigs. They were heavy bodied, long muzzled, powerfully jawed, formidable hoofed animals. Bison sized members of the entelodont family, such as the genus Daedon, stood more than six feet at the shoulders.

They seem built to run for short bursts.

There is ample evidence that entledonts were predators; Dr. Al Mead, a vertebrate paleontologist with Georgia College and State University (whose unrelated Pleistocene work we’ll look at later) researched entelodonts in South Dakota and studied one Miocene age oreodont skull which had an entelodont tooth embedded in it. Oreodonts are sheep-like herbivores distantly related to camels.

Unfortunately, further research in KaMin Pit 22 is impossible; below is an email from Carl Joyce, Senior Geologist for Kamin. Mr. Joyce was not aware of the entelodont finds previous to our email exchanges.
​
12/Sept/2012
Mr. Thurman,
​
I am aware of the plant fossils that were present in the Twiggs clay in our old 22 Mine site. We have long since finished mining, reclaimed this mine and released it back to the landowner. In hind site we should have preserve this location for fossil collections. At present, KaMin does not own any good fossil collection sites, but we do have one lease property that has a good exposure of the Tivola.

Sincerely Carl
Carl E. Joyce
Exploration & Land Management
Senior Geologist; PG
KaMin Performance Minerals
​
Artwork; Sunni Zembloski
These images of Georgia’s entelodont were created by the artist Sunni Zemblowski whom I had the pleasure to meet one day at Georgia Southwestern. She attended a talk I gave over how Georgia’s fossils could be used in science education. Described as a superb student by Professor Laurel Robinson, she is a bright and gifted artist capable of telling a story with a hand full of images. In these two panels she has not only told the tale of the tooth, but created a fictional Georgia Paleontology Museum actively educating our students. When these images were shown to several Georgia paleontologists, from multiple schools, the work was very well received. 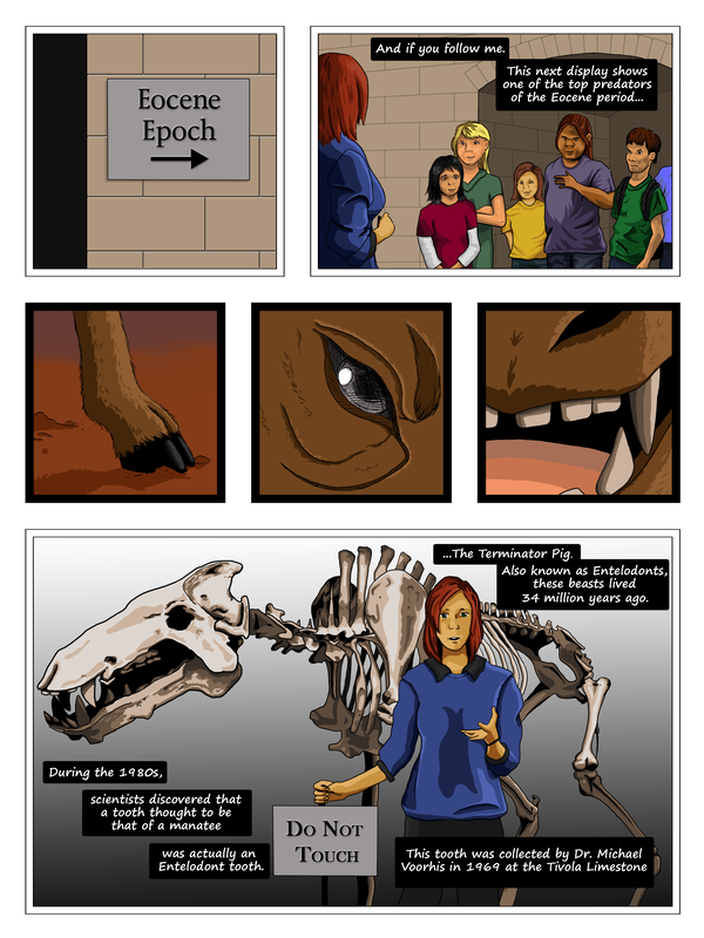 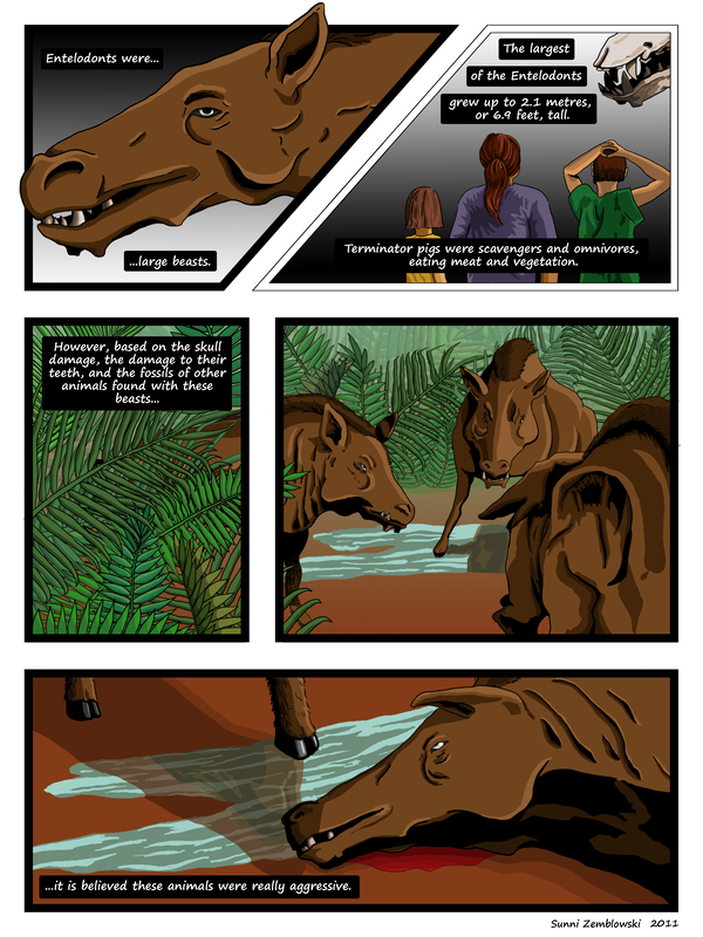