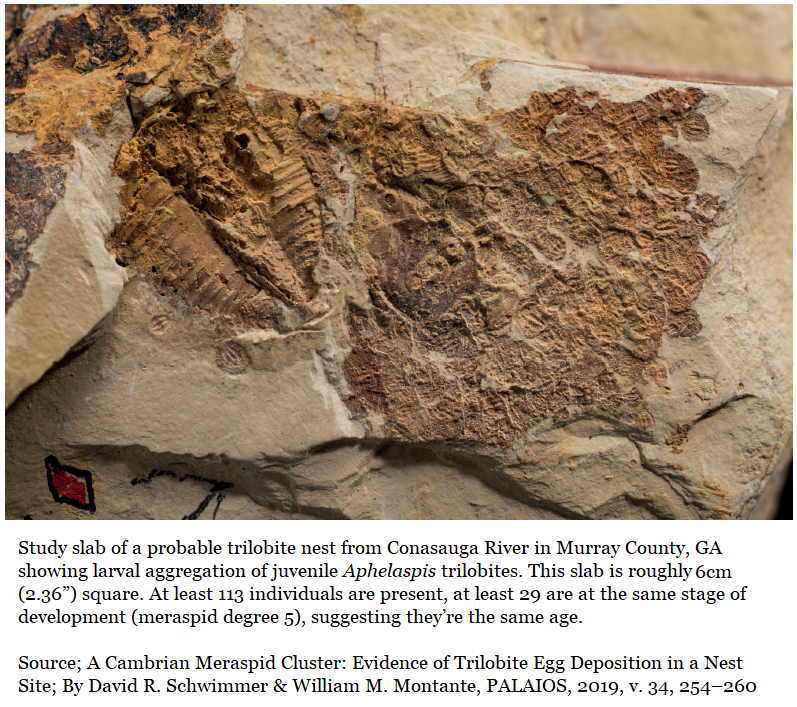 The specimen seen above shows both nesting and homing behavior and came from the bank of the Conasauga River in Murray County of northwestern Georgia. It’s actually a small fossiliferous rock slab roughly 6cm (2.36”) square.

​Questions persist, in general, over when and where various behaviors emerged. Trilobites have been recently shown to be oviparous, meaning they laid eggs which hatched later. When this behavior emerged in the animal kingdom is unknown.

It was discovered in the field by William (Bill) M. Montante  of Tellus Science Museum who's a well-seasoned amateur knowledgeable over these NW Georgia sediments. Recognizing that he had something interesting, he took the slab to Dr. David Schwimmer at Columbus State University, his old friend and a long time Georgia trilobite researcher.

Upon review Schwimmer concluded that Montante had indeed found an important fossil which dramatically added to the scientific body of knowledge. They decided to pursue peer-review publication (Schwimmer & Montante have published multiple  peer-reviewed papers together). They succeeded and their research appears in Volume 24 of the highly regarded Palaios, no small feat. 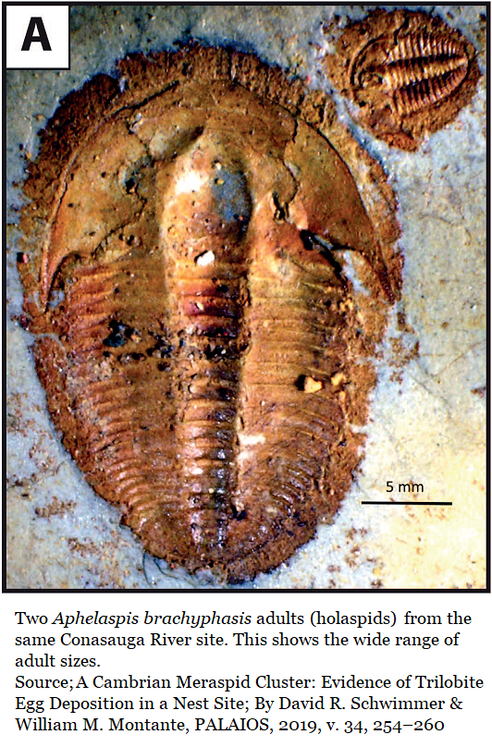 ​As a reminder; 500 million years ago Georgia was the floor of a shallow sea and there were no bones, trees, insects or enameled teeth (such as ours) on all the Earth.
​
The slab reveals a cluster of juvenile (larval) trilobites of the genus; Aphelaspis, and the molted parts of a shell from an adult Aphelaspis brachyphasis. The molted shell seems to be from a single individual.
​
At least 113 individual juveniles are present. Juveniles which would have been highly mobile in life.

​In a moment we’ll discuss what “meraspid” means, it's a term used to described stages of juvenile trilobite growth.
​ 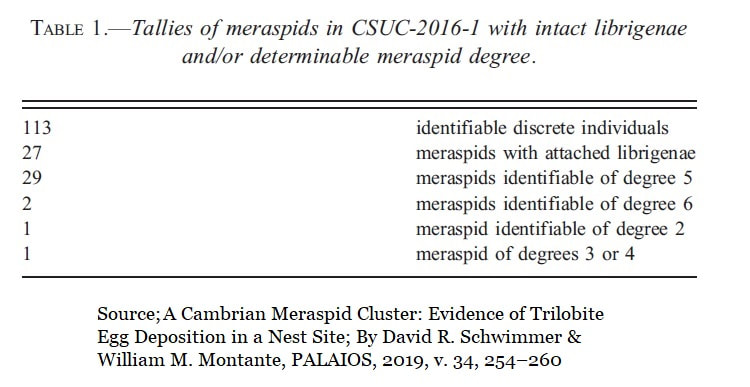 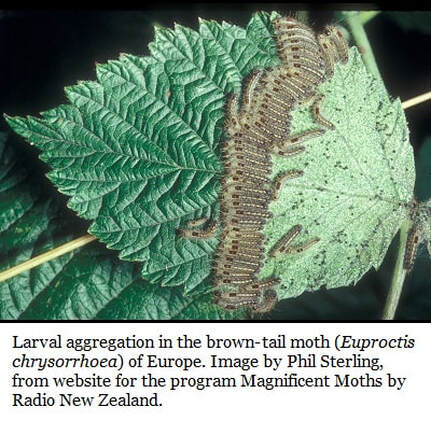 What the fossils on the slab show is larval aggregation, basically large numbers of larva coming together. Why larva gather together isn’t fully understood. It’s seen today in several species of insects.

​One research abstract from 2018 on the fruit fly Bactrocera tryoni (2) states that larval aggregation consistently gave body mass benefits to individuals. Since larger larva generally lead to adults who are more fit, individuals clearly benefitted from group behavior.​
Trilobite Molting
To understand what Schwimmer & Montante are reporting, we must understand a bit about the stages of molting in trilobites. Like all arthropods trilobites molt. They had a hard segmented shell, an exoskeleton which couldn’t grow. When they outgrew it, they shed their shell and a new exoskeleton was exposed and hardened. Today we see this in crabs, shrimp, scorpions, centipedes, spiders, insects and many more.
​
This means that you might find fossils of either cast-off molts and bodies. For researchers, telling the difference is straightforward. The first give-away is the presence of free cheeks (or librigenae), these are very easily carried away by currents. If the librigenae are present it’s the fossil of a body. As stated above, at leave 27 of the larva were body fossils made by living animals.
​
Paleontologists have learned that juvenile trilobites add body segments when molting, but adults do not. So Paleontologists divide the development of trilobites into three stages, protaspid, meraspid, & holaspid. (3)
​The meraspid stage is further subdivided into degrees by how many segments have been added. Interestingly, at least 29 juveniles present in the slab are at meraspid degree 5, they show the same number of body segments. It is assumed that they’re all at the same age. However, we have no information about their rate of growth or what their age is beyond juveniles of meraspid degree 5.

Trilobite Clusters
Now, there are many reports of trilobite clusters. Two types of clusters are known, molt and body clusters. Molt clusters are preserved empty shells, since they’re very lightweight they’re easily moved about by currents until they’re dropped in an eddy and buried by sediments. It's believed that shed clusters are simply formed by currents.
​
Body clusters are different. These were living animals which came together intentionally; perhaps a feeding group, or for mating or collective defense. They died together and were preserved together.
​
More importantly, 27 of these are well enough preserved to see that they still possessed their free cheeks at the time of preservation. This cluster of trilobites was rapidly buried & killed.
​  ​
Now comes the interesting part. Those 27 complete, juvenile Aphelaspis trilobite found along the Conasauga River are not newly hatched. Nor are they adults. They are at the meraspid stage, they’re juveniles.
​
Why were so many juvenile trilobites, of the same apparent age, still together? The first instinct is to assume protection; but the geology of the claystone strongly suggest that these trilobites were exposed on the sea bottom. They weren’t hiding under anything.

Horseshoe crabs are probably the closest living relative to trilobites and they are well known to gather in great numbers for molting, mating, and to deposit eggs. These massed horseshoe crabs are well document feeding opportunities for predators, so protection isn’t a motive for the individuals.
​
Those meraspid Aphelaspis trilobites were juveniles so they weren’t mating or depositing eggs. The attached free cheeks show this wasn’t a molting assemblage.

When these trilobites lived the claystone matrix of the slab would have been a soft substrate of fine-grained sediments representing a quiet marine environment. But the muddy, silty bottom would have been unsuitable for eggs. Eggs would have been easily buried by silt disturbed by another passing animal.  However, there was a molted shell of an adult trilobite nearby. This shell would have made a good, fairly hard surface site for eggs.
​
Schwimmer & Montante’s Theory
I’m proud to say I know both Schwimmer and Montante, they’re both respected scientists, especially here in the Southeast and Georgia.
​
They noted that the fine-grained muddy bottom was probably unsuitable for egg laying but the nearby molted shell of the adult is a different matter. It’s been established that trilobites very likely laid eggs. Schwimmer & Montante theorize that the eggs were laid in the molted shell.
​
To quote their research;
“We hypothesize, therefore, that these sclerites (molted shells) comprise the egg deposition site that originated this meraspid assemblage. It is recognized that this hypothesis assumes there was some form of homing or kin-affiliative behavior in meraspid trilobites which would explain how mobile, and likely planktonic, individuals re-associated after some developmental stages.”
​
Schwimmer and Montante further, and successfully, argue that some sort of homing behavior, larval aggregation, would explain the behavior recorded in the slab. That such an assemblage of same-age individuals “…would be improbable as a random event.”
They argue that these trilobites hatched in the nest of the discarded shell and returned, or homed, after multiple molts to the nest site.

We cannot currently know how much time passed between hatching and homing back to the nest. We don't know why they returned.
​
The location where the small slab was collected contains many Aphelaspis brachyphasis at all stages of development; “… and there are other specimens from the site which may represent additional occurrences of larval clustering.”

Schwimmer and Montante close by acknowledging that the preserved juvenile trilobites’ behavior may well be a feeding mass or a herd-protection mass, but the question of why and how a larval aggregation of juveniles came together persist…
​
References
​1)      A Cambrian Meraspid Cluster: Evidence of Trilobite Egg Deposition in a Nest Site; By David R. Schwimmer & William M. Montante, PALAIOS, 2019, v. 34, 254–260, Research Article
2)     Social and nutritional factors shape larval aggregation, foraging, and body mass in a polyphagous fly; by, Juliano Morimoto, Binh Nguyen, Shabnam Tarahi Tabrizi, Fleur Ponton & Phillip Taylor, published; Scientific Reports, volume 8, Article number: 14750 (2018)
3)     Molting in Trilobites; Trilobiteseas.com, Paleobiology of a Paleozoic Icon for the Collector and Enthusiast, by; Christopher R. Cunningham, copyright 2016-2017