There’s a large canyon beneath the fields of Southwest Georgia, stretching from Bainbridge to Statesboro like a great scar hidden by cosmetics. The canyon, known as the Gulf Trough, was cut by the extinct Suwannee Current tens of millions of years ago.

Dr. Burt Carter at Georgia Southwestern  in Americus was instrumental in beginning our understanding of this feature. 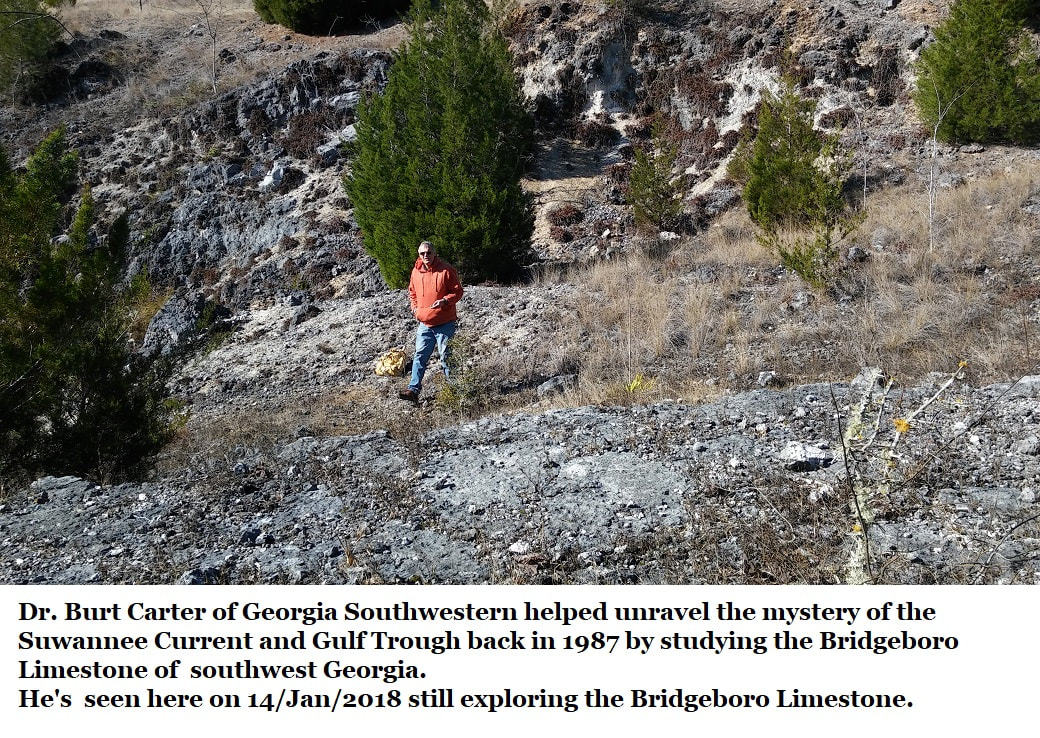 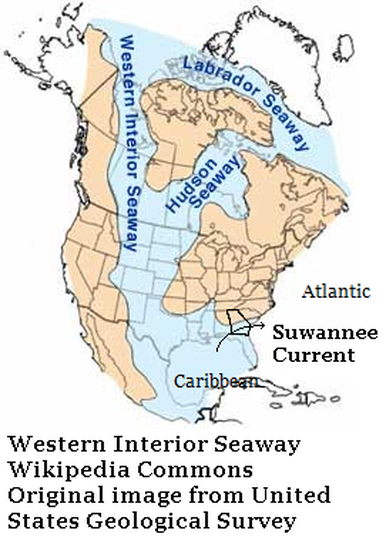 ​​In the late 1980s & early 1990s, Paul F. Huddlestun, with the Georgia Geologic Survey, greatly expanded this work. He showed how the Suwannee Current impacted Georgia & Florida throughout the Eocene, Oligocene, and probably into the Miocene. Huddletun's works in this remain the standard guides to Coastal Plain sediments used in all research to this day.

​But it all started with Manker & Carter's research over the rhodoliths of the Bridgeboro Limestone.

​The Bridgebore was formed during the Early Oligocene epoch, about 32 million years ago. But the Suwannee Current is far older.

The current first rose from the Caribbean to cross South Georgia while dinosaurs still roamed the Southeast, about 70 million years ago.

​It endured many changes in sea level, it was even cut-off a time or two, when coastlines retreated​ beyond its reach. But when a warmer Earth prevailed and sea levels rose, the current was resurrected. This happened repeatedly until erosion filled the canyon the sea had once carved.

​All of this was essentially unknown until the late 1980s. 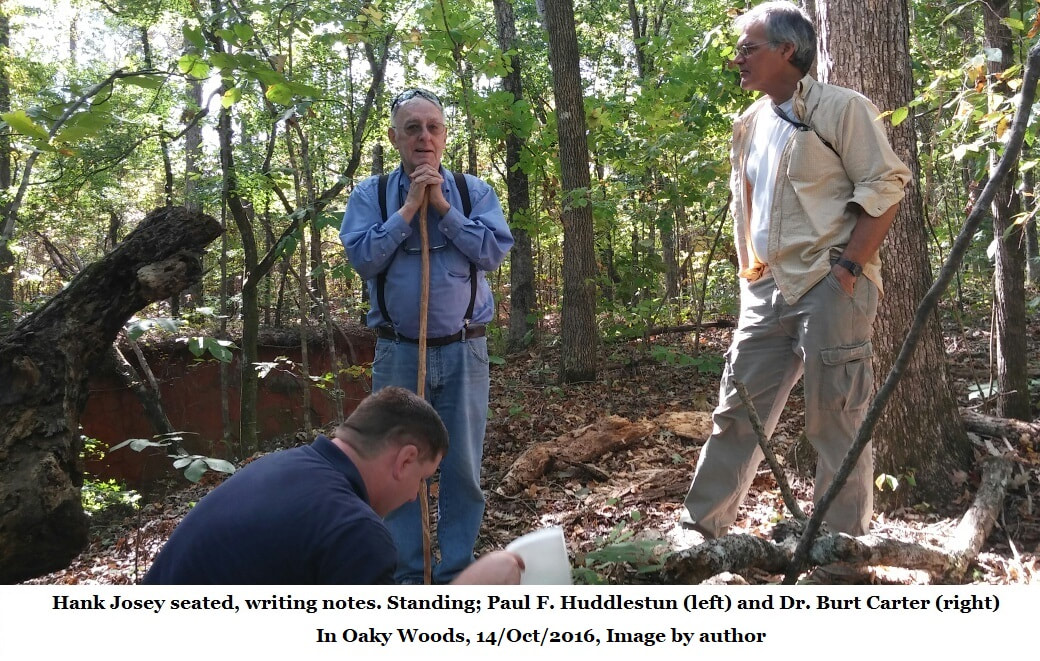 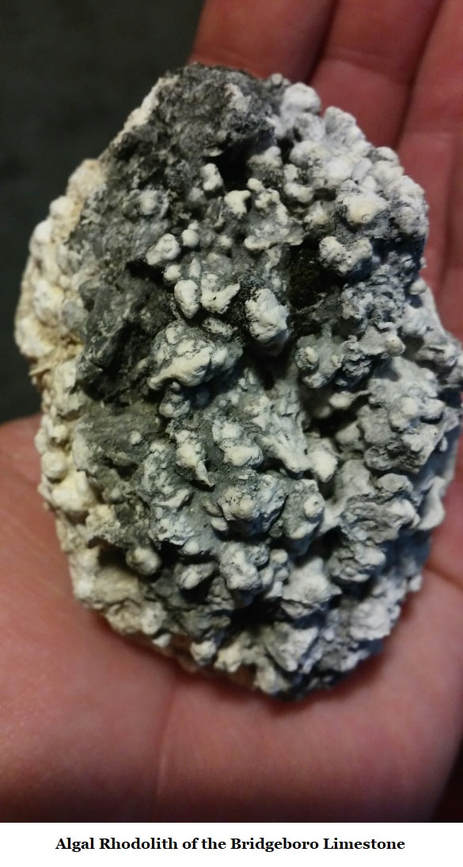 Different species have different requirements of their environments, as well as different feeding methods. In many cases these requirements are well understood. Invertebrate paleontologists can often use fossils to understand whole eco-systems.

In many ways invertebrate paleontology is the backbone of all paleontological research (no pun intended). Generally speaking, it is the invertebrates which allow the dating of sediments and explanations of local conditions without expensive and often destructive lab tests.

​Dr. Carter is an invertebrate paleontologists who specializes in echinoids; sand dollars & sea urchins. But during the 1987 research on the Bridgeboro Limestone Carter & Manker performed, their focus was on fossilized rhodoliths, which are actually plants, little colonies of red algae.

​Algae rhodoliths are unusual; they form a calcium structure, within this layers of algae/calcium form. They're found either in rounded masses or as mats, an important difference.

Rhodoliths are fairly common in the world's seas and are still with us today. Like tiny tumbleweeds of the sea, the rounded, unattached, rhodoliths can move freely on the sea bed in response to currents or tides. Their rigid calcium deposits allow them to roll along undamaged. In quieter waters they form algal mats, flat bladed structures.

​These two different styles of growth, determined by their environment, proved crucial.

In the 1980s the presence of a great current across Georgia's Coastal Plain was only suspected. Manker and Carter posed the question; could observations of the algae rhodoliths and maps be used to map such a current?

The typical single rhodolith colony is about the size of a golf ball so we’re talking about a vast population of rhodolith colonies which built the Bridgeboro Limestone. Being algae, a plant, it lives through photosynthesis.

In perfect clear water conditions, sunlight is strong enough for photosynthesis to about 600 feet. This is called the Photic Zone. Typically, rhodolith colonies occur in much shallower water where ample sunlight is available for long hours daily.

​The Bridgeboro has been mined several times as an aggregate. At it's top there is a bed of cherty rhodoliths a few feet this which is stripped away in mining.
​
The Bridgeboro is rich in fossils but diversity is relatively low as seen in this 2001 report by Deborah Freile, another active research working the Bridgeboro & studying rhodoliths. 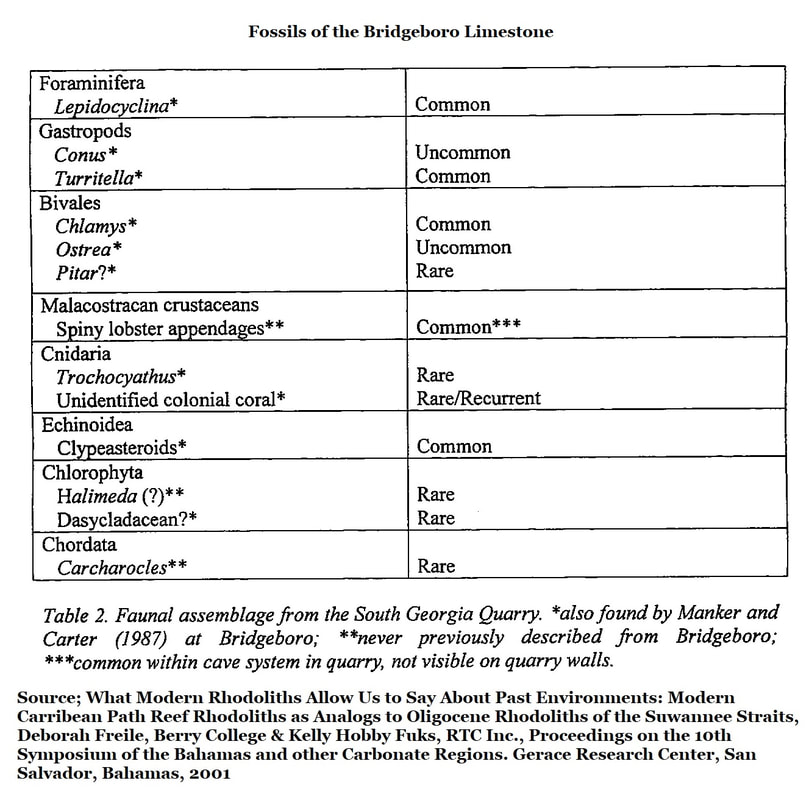 Note; Dr. Burt Carter at Georgia Southwestern reported to the author that he has recovered a stingray barb from the Bridgeboro Limestone, there was no enough material to identify a species.
​ 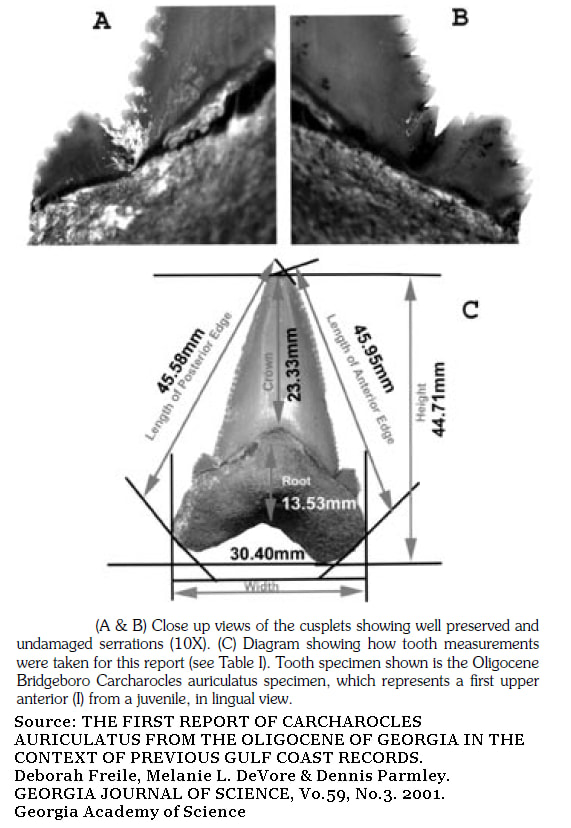 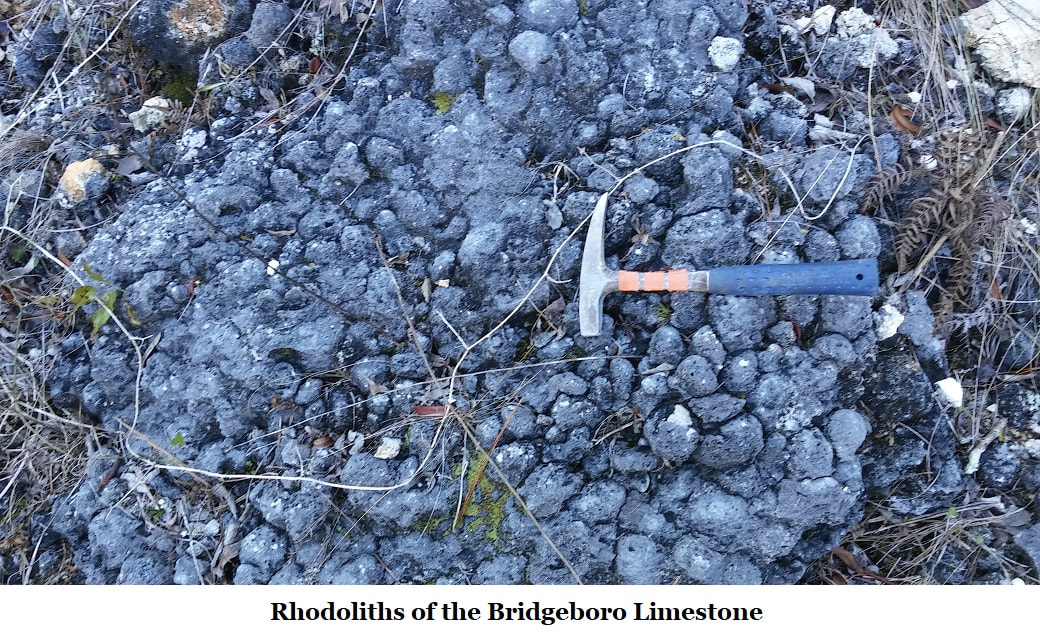 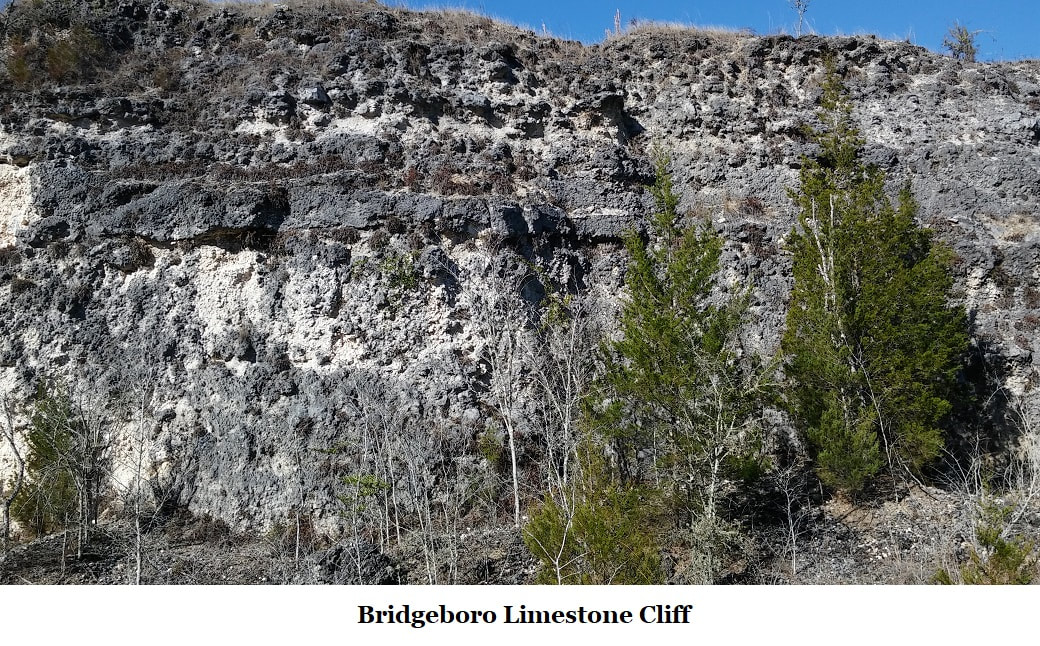 The Bridegboro Limestone in Science
​As stated earlier, in the 1980s the presence of a great current across Georgia's Coastal Plain was only suspected. Manker and Carter posed the question; could observations of the algae rhodoliths and maps be used to map such a current?

Only careful observation of surface deposits reveals this great scar in the farmlands of Southwest Georgia; in 1944 geologists Paul L. Applin and Esther Applin recorded the feature when they noted that in several locations the same surface formations occurred in a pattern north and south of more recent deposits.

​As early as 1911, Veatch & Stephenson made similar observations but their research was so wide ranging across the Coastal Plain that the connection with a possible extinct current was lost.

With the 1944 observations in mind, Carter & Manker took a close look at the Bridgeboro Limestone and its rhodoliths. They used the algae to define a whole environment and understand a hidden canyon. 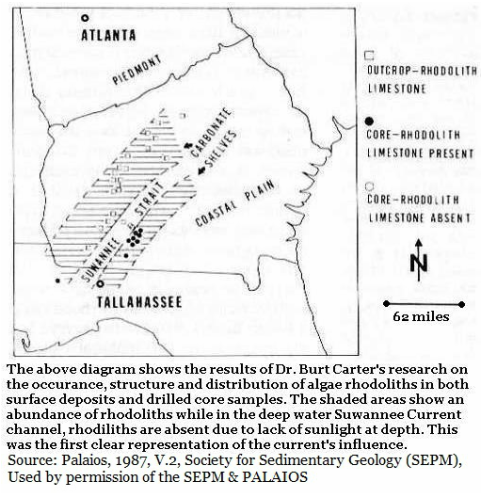 So How Do You Find a Buried Canyon?
Carter & Manker's  theory was simple. The canyon would be located where the core of the Suwannee Current was strongest. In the Early Oligocene, this would mean wherever the concentration of rounded rhodoliths was greatest.

What Dr. Manker and Dr. Carter hoped to learn was the orientation and extent of the buried trench, so they would look for three rhodolith conditions.

1)      Wherever they found flattened, blade-like masses of rhodolith colonies, they could assume weak to absent currents far from the Suwannee Current’s core.

2)     Wherever they found rhodoliths as clustered globes they could assume a strong current, near the canyon, near the Suwannee Current’s core.

3)     When they found an area where the clustered globes abruptly ended, then they had found the edge of the canyon carved by the Suwannee Current. 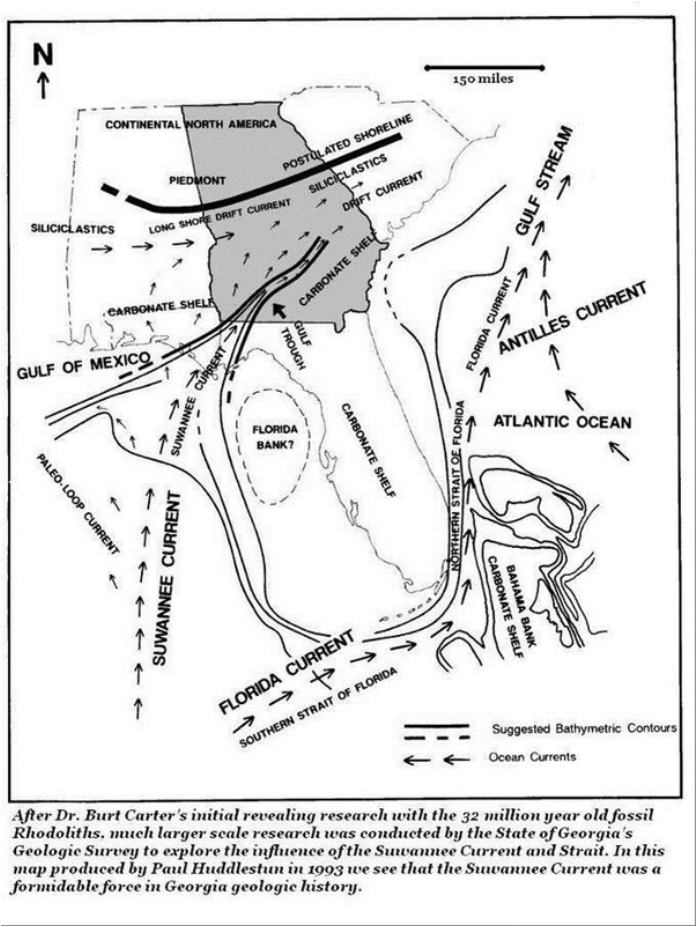 The Canyon Revealed
They found that the core of the Suwannee Current,  or the Suwannee Strait, was about 20 miles wide when the Bridgeboro Limestone was a living mass of rhodoliths. This was observed by the abrupt absence of rhodoliths in a swath across Southwest Georgia. The scar which the Applins had fist observed.

The current crossed the Florida panhandle, entered Georgia at Grady, Thomas and Brooks Counties rose northwards towards the Fall Line and then turned eastward towards the coastline, crossing just north of Statesboro. But the current's Atlantic end wandered too, sometimes swinging northward.

When sea levels were low and the deep canyon was exposed most of Georgia’s rivers flowed through the canyon, further eroding it. Researchers have speculated that the large canyon river probably formed lakes and falls in the canyon floor creating isolated habitats.

What strange animals took refuge in that canyon is something we can never know.

When sea levels were high and the current flowed across South Georgia, which was the most common condition, the shallow sea was a warm and fertile environment rich in diversity. 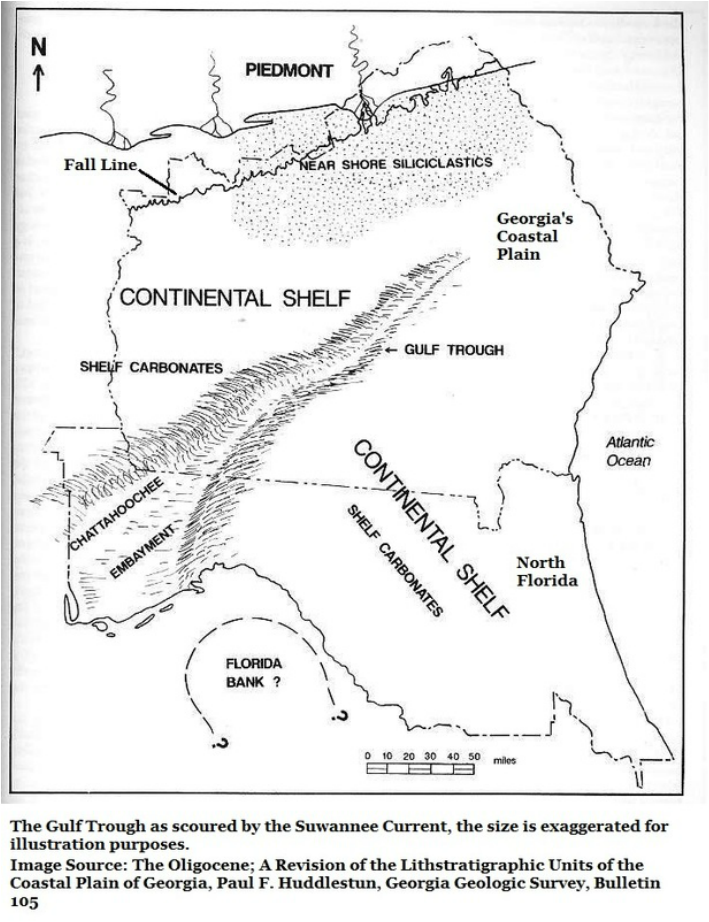 Deborah Freile & Kelly Fuks 2001 Research
​However, in 2001 Deborah Freile and Kelly Fuks challenged the findings of Manker and Carter. They published a paper over modern rhodoliths in the Bahamas which argues convincingly that currents have little, if any, impact on rhodolith structure.

Stated in the Conclusion section of the 2001 Freile, Fuks paper "...rhodolith morphology, growth form and texture cannot be exclusively used to indicate relative energy and bathemetry (depth) of a paleoenvironment." Then further in the same paragraph. "Although rhodolith formation may be linked with depth and relative energy, we found no strong indications that depth and relative energy were the primary environmental factors influencing rhodolith growth." Freile & Fuks addedto their conclusions; "We suggest that rhodoliths do aid in estimating past environments. However, they can be misleading when used as a singular paleoenvironmental indicator."

According to their own conclusions, Freile and Fuks 2001 paper neither overturns or nullifies the 1987 work of Manker and Carter. Extensive field work by Paul Huddlestun and core samples reviewed by the Georgia Geologic Survey support the findings of Manker & Carter. The Suwannee Current existed for  45+ million years, it's location and dimensions in Southwest Georgia are pretty much as Manker and Carter described.
The Suwannee Current's Influence
So... around 70 million years ago a fertile and powerful current became established in the sea covering South Georgia. It rose in the warm Gulf of Mexico, crossed the Florida Panhandle into South Georgia and ran northeast across Georgia into the Atlantic Ocean. The Gulf Stream current was at least partially redirected across Georgia. Many researchers will argue that the Gulf Stream was wholly contained in the Suwannee Current.

It influenced everything. It was persistent enough to carve (or more properly scour) the Gulf Trough; a canyon, many hundreds of feet deep, across the Florida panhandle and northeastward into Georgia for about 150 miles. At the modern Georgia/Florida border it spanned the 40 miles in width between Bainbridge to Valdosta.

By way of comparison; the modern Grand Canyon in Arizona is 277 miles long and 18 miles wide maximum. The river carved Grand Canyon is a very different feature.

In saying “hundreds of feet deep” I am trying to be conservative. Deep drill core samples from the area around Colquitt, Georgia show Suwannee Current related sediments to a depth of at least 1,300 feet (Eocene Epoch).


​About 24 million years ago the canyon was backfilled to the brims of its walls by large scale erosion. Multiple sea level changes followed, smoothing the landscape and almost erasing all surface evidence of both the canyon and the current which carved it. 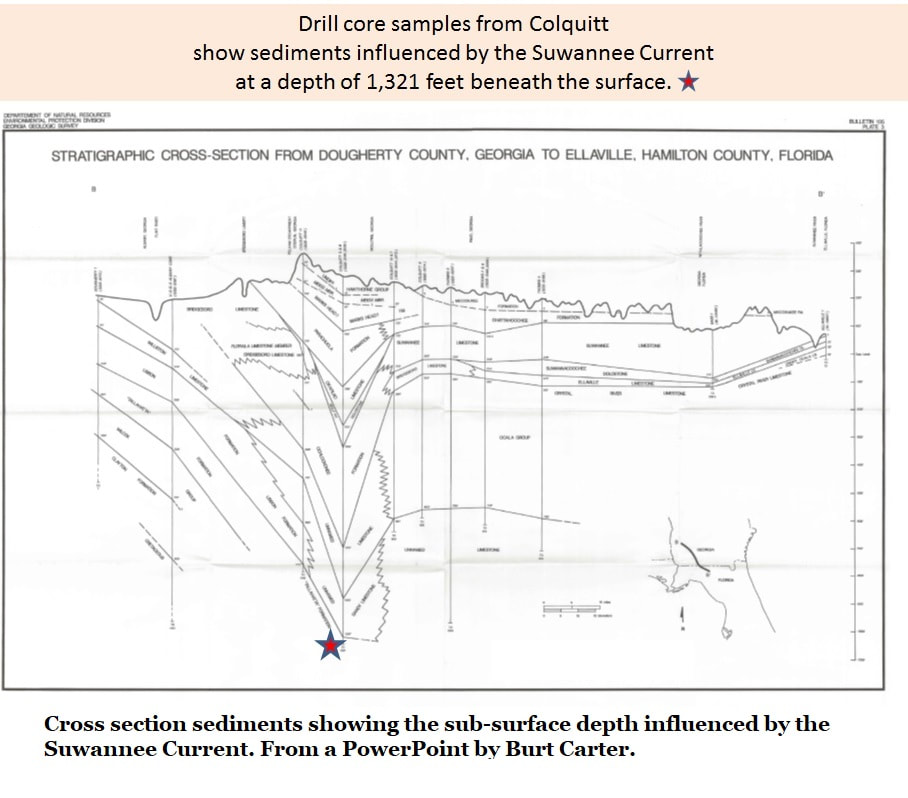 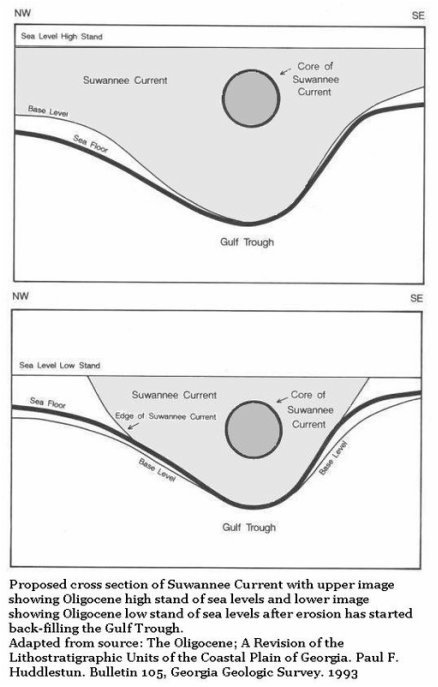 Defining the Canyon Further
Paul Huddlestun, was a highly active researcher from the Georgia Geological Survey.

It was Huddlestun’s work in the 1990s which helped fully define the extent of both the current and the canyon and how it changed during the fluctuation of Georgia’s climates.

The rhodolith research by Manker and Carter was the key which allowed Huddlestun to begin the (as yet unfinished) process of unraveling the extremely complex geologic history of Georgia’s Coastal Plain.

Paleoecology and Paleogeography of an Extensive Rhodolith facies from the Lower Oligocene of South Georgia and North Florida. J.P. Manker & Burt Carter. Society for Economic Paleontologists and Mineralogists (Now the Society for Sedimentary Geology) Published in Palaios, 1987, Vol.2, pg. 181-188.

Freile, Deborah & Fuks, Kelly; What Modern Rhodoliths Allow Us To Say About Past Environments: Modern Caribbean Patch Reef Rhodoliths As Analogues to Oligocene Rhodoliths of the Suwannee Straits; Proceedings of the 10th Symposium on the Geology of the Bahamas and Other Carbonate Regions, Gerace Research Center, San Salvador, Bahamas 2001
​Below is a slide show covering Research on the Suwannee Current