21: The Arrival of Humans in Georgia 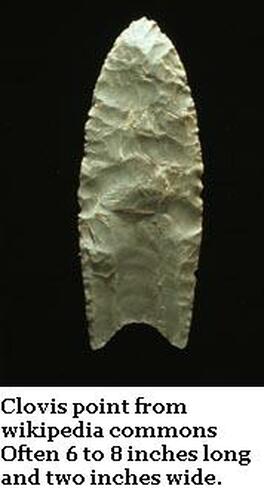 This is an area of ongoing debate, and though this is a paleontological work claiming no expertise in archeology, the arrival of man is an important point in paleontology; it coincides with the extinction of the large ice age megafauna such as mammoths, mastodons, giant bison and many others. Research is still ongoing over the whether or not the arrival of man triggered, in some way, this extinction event.

Visiting Ocmulgee National Park (Indian Mounds) in Macon, Georgia we see that the National Park Service of the U.S. Department of the Interior states that Middle Georgia has had continuous human habitation for 12,000 years. 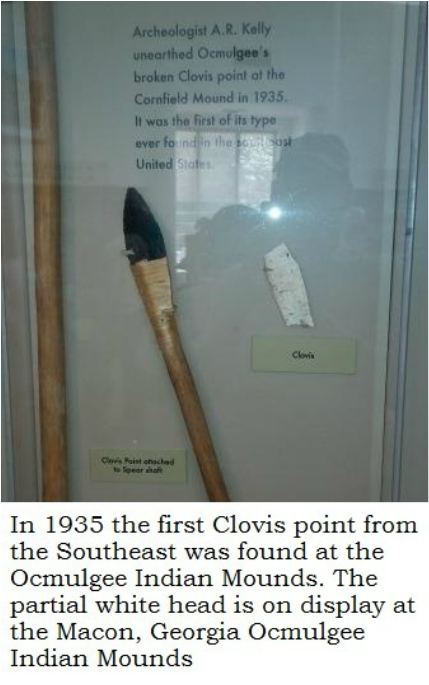 This continuous occupation does not mean the same people were present. Cultures came and went, Georgia’s resources are abundant. This is why Georgia has produced artifacts from so many different Native American periods and cultures.

The oldest are probably the Clovis people; it is important to bear in mind that they were modern humans. The only differences between them and us; was culture, technology and education. We could not survive and raise families in their world, with their technology, any more than they could survive in ours. The modern immune system is probably the only physiological difference simply because our ancestors survived many epidemics unknown to the Clovis and early Native Americans before the arrival of Columbus (or other European explorers).

The earliest European visitors found the Mississippian culture, who were mound builders, a very different people than the Clovis.

Clovis points occur in Georgia and are dated to at least 13,250 years old. These are a very distinctive type of spear or lance point originally discovered and described from samples in Clovis, New Mexico.

From here, things get complex. One of the problems is that there are many Native American cultures, from many different recent time periods, known to occur in both the USA and Georgia.

These are usually identified by the varying styles of tools or pottery they left behind. This is compounded by the problem that all of these cultures had the same basic needs, and often chose the same locations for their communities because all the resources they required were available.

They needed workable stone for tools. They needed a source of water which in many cases would also have been used for transportation, thus rivers, larger creeks or natural lakes.

They needed high ground near water sources which would give them protection from flooding. Predators also tend to avoid high, exposed ground. So it’s no surprise that stone tools can be found from several different time periods all made from the same local stone sources.

Chert was typically the stone of choice was here in Middle Georgia; we have an abundance natural chert, and much of it is distinctive in quality, coloration and pattern. It is often very localized; one certain pattern, color or texture may only occur within a few acres.

So in many cases one might be able to determine where any given stone tool originated. However, Native Americans heated the stone to make it easier to work and more durable.

Heating chert changes its coloration and pattern, so to determine the source for such tools one would have to collected samples from several areas and heat them all for comparison.

Stone tools are also found in Georgia which did not originate locally; this suggests both travel and trading among the Native Americans, something which is generally accepted by researchers.

Turning back to paleontology, and resting on the Clovis period of 13,250 years ago which is relatively well known and accepted, we can see what animals were present when these people lived and hunted in Georgia.

The Clovis people are known to have hunted mammoths and mastodons. In other parts of the country Clovis artifacts have been found in relation to kills of these animals. There were also giant ground sloths present, as well as giant bison, cougars, jaguars, black bears, cave bears, giant beavers, large armadillos, llamas, horses, giant tortoises, alligators…. The list goes on.

The American lion, saber tooth cats, saber toothed tiger, dire wolf and brown bear may also have been present. They were certainly in present in Florida and surrounding states. (35)

If we walked about 19 miles out into the Atlantic from Georgia’s coastline we’d reach Gray’s Reef. Today of course we’d need a boat, but this wasn’t always so. Sea levels rise and sea levels fall and more than once, since humans have been present in Georgia, you could have walked all the way to Gray’s Reef. Men, women and children did this.

In 2003 a research project led by the University of Georgia researchers Ervan G, Garrison, Sherri L. Littman, and Megan Mitchell looked at and reported on the Gray’s Reef fossils and artifacts.

Gray’s Reef was most recently above sea level about 8,000 years ago. Fossils from species of bison, which species is unknown, have been recovered from Gray’s Reef and radio carbon dated by the University of Georgia to this time frame.

Other fossils from Grays Reef include horse, elk or deer and what is thought to be a camel fossil. The relatives of modern camels and llamas were certainly in Georgia during this time frame. Older fossils have also been recovered, including both mastodon and mammoth remains dating to more than 10,000 years old.

Perhaps the most interesting of the specimens recovered have been human artifacts; tools, stone projectile points made of orthoquartizite and antler material, whose ages has not yet been accurately determined. They could easily be 8,000 years old. (17)

Georgiaite Artifacts
On the subject of artifacts, and returning for a moment to Georgia’s tektites, Hal Povenmire reports that about 5% to 10% of Georgia’s tektites show “indications of being flaked by early Indians. However, complete artifacts are extremely rare”. (39)

“In early 2011, a second Georgia tektite which had been flaked into a projectile point was reported.  This specimen was found in Dodge County and artifact specialists have suggested that it was of archaic age (Archaic Period) and the aborigines flaking it were likely of the Pickwick or Wacissa Cultures. This 7.1 gram tektite was flaked, damaged, and then reworked several times.” (39)

The U.S. National Monument website for the Ocmulgee National Monument places the Archaic Period at 1,000 to 8,000 BC (say 3,000 to 10,000 years ago) with the tektite itself being more than 30 million years old.