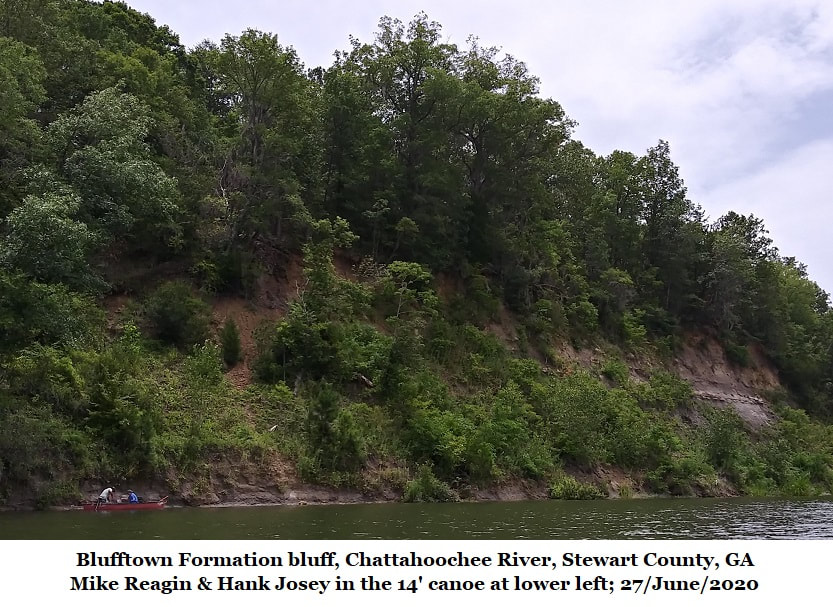 There are dinosaur fossils in the Cretaceous, 77 million year old, Blufftown Formation, they're well documented in Alabama. Georgia's dinosaurs fossils have been reassigned to the overlying Cusseta Formation. But the Blufftown Formation occurs in west Georgia’s Chattahoochee River Valley and across the river in Alabama. The formation was named for the long extinct riverside village of Blufftown.

In at least one Georgia location Dr. David Schwimmer reports a contact bed where the Blufftown and Cusseta Formations are seemingly mixed. Not only does a very rare oyster assemblage occur, but there is abundant vertebrate material, bones and teeth, including a wealth shark teeth and dinosaur remains (1,5). All of these are assigned to the Cusseta Formation, though many of the sharks also occur, more sparingly, in the underlying Blufftown Formation. 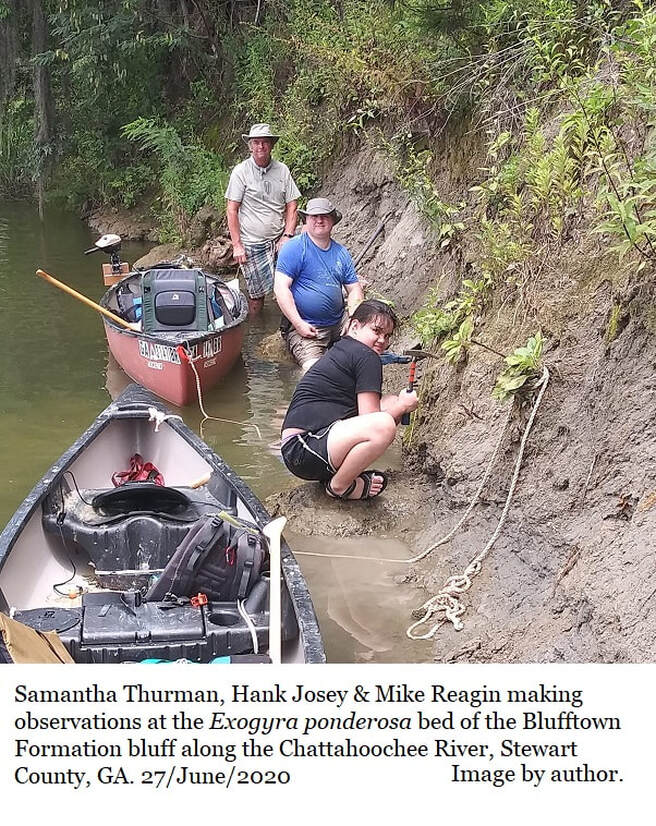 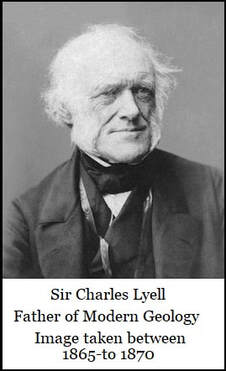 ​
​It was the father of modern geology, Sir Charles Lyell, who first identified Cretaceous sediments in Georgia during his 1841 visit. Lyell, an Englishman, was one of the great scientists from the Age of Reason and published the Principals of Geology in 1830. A book which quickly became required reading for any serious student of science, and science was all the rage in 19th Century Europe. He visited the USA twice, in 1841 and again in 1845. Georgia’s natural history was so compelling that Lyell took time to make observations in our state during both trips.​
​ 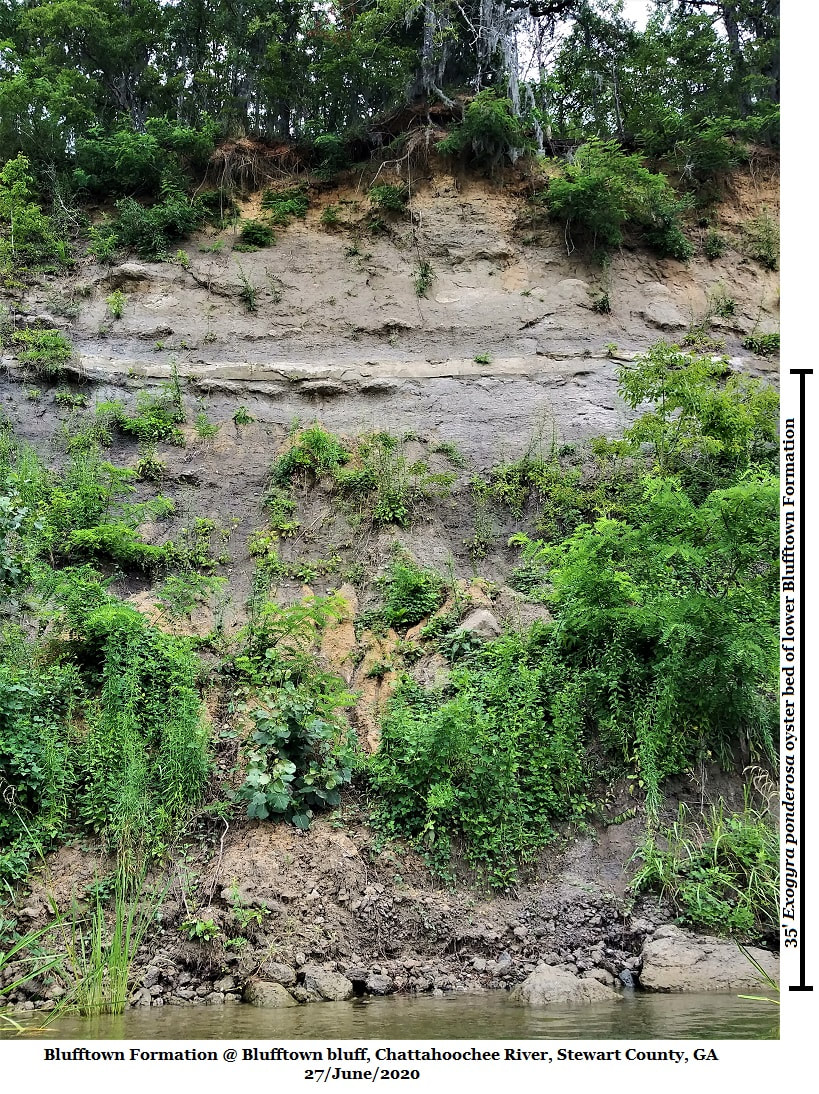 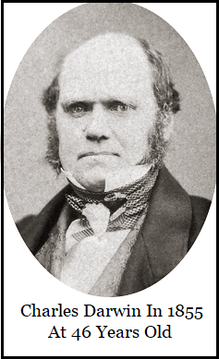 ​Charles Darwin studied Lyell’s Principals of Geology while he was aboard the HMS Beagle. He had a copy of the book in his luggage when the ship sailed in December 1831. Darwin made geological observations at every port. In South America he discovered & collected a cache of large, Pleistocene, mammalian fossils which he shipped back to England. These generated great interest while Darwin was still at sea. None of them had ever been seen in England before. Lyell learned of Darwin’s work and upon the HMS Beagle’s return in 1836 the two men met and became lifelong friends. ​ 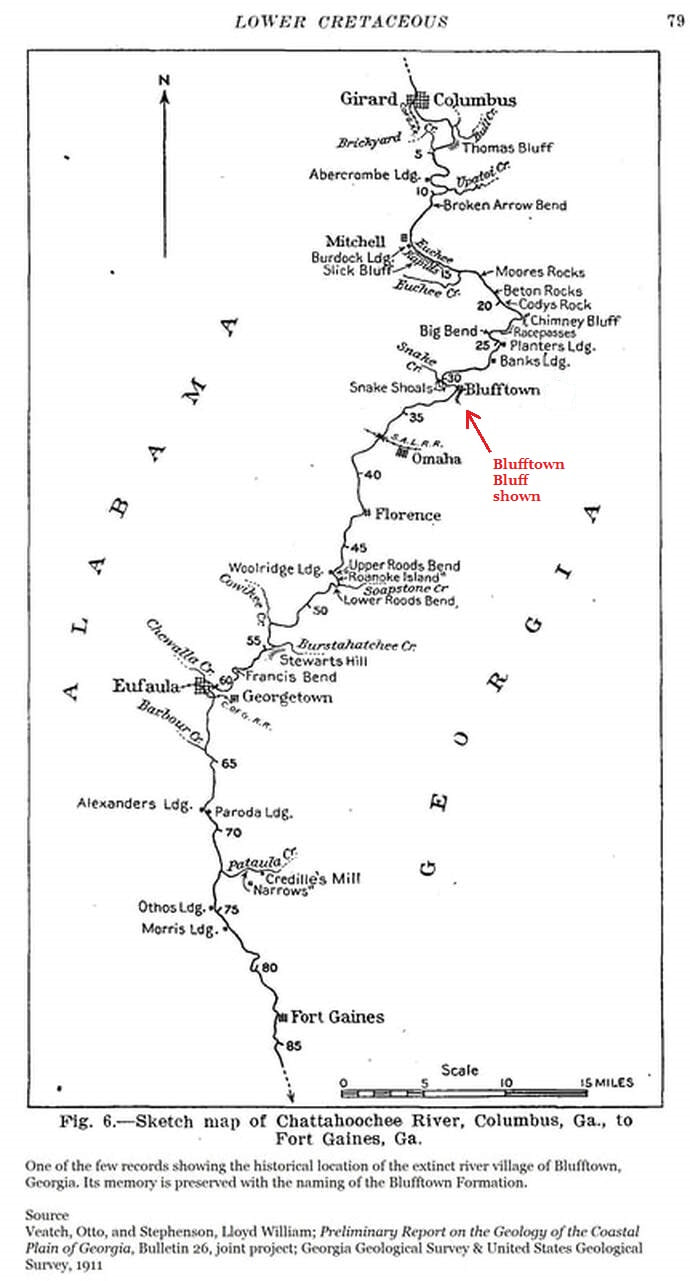 ​
​It was Lyell who urged Darwin to publish his research, observations & theories over evolution.

Sir Charles Lyell will forever stand as a link between Georgia, Darwin, & the Theory of Evolution.
​
​Georgia has a rich history of dinosaur and many other Cretaceous aged fossils; marine reptiles, ray-finned fish, sharks, a pterosaur and even a wide variety of plants. Dr. David Schwimmer at Columbus State University has been the lead or co-author on many of the reports on animal remains. But during the 1980s and 1990s when much of this initial work was done, the complex and scattered fossil-beds mislead researchers. 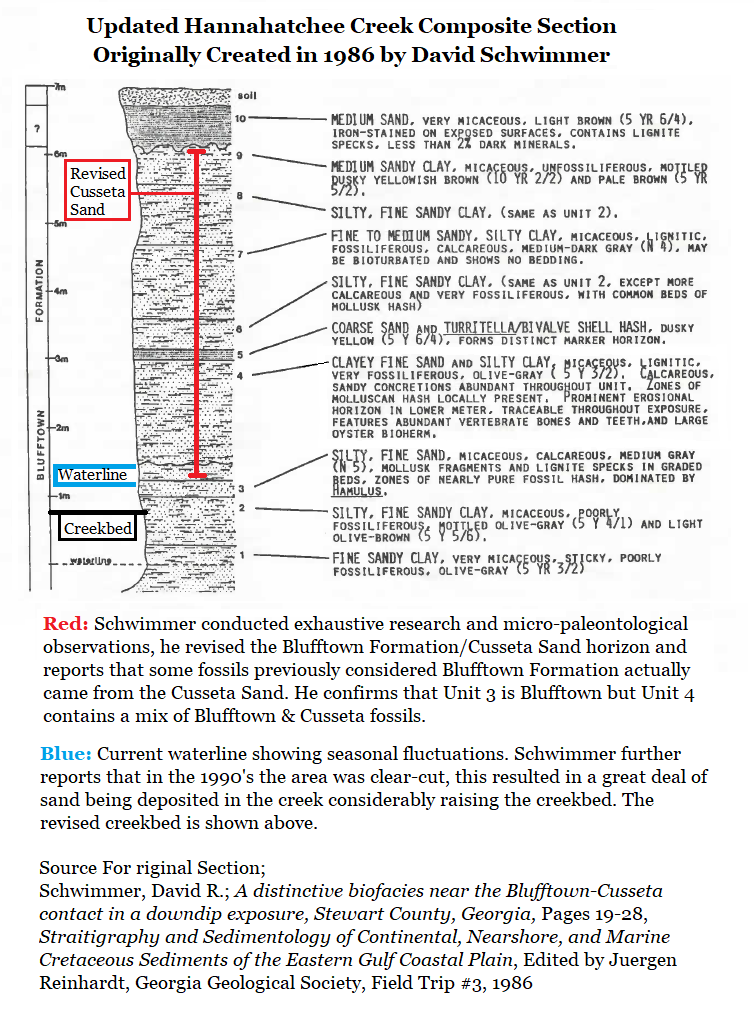 ​
​
​
So after detailed observations in micropaleontology, over years, Schwimmer learned that some of the fossils originally attributed to the Blufftown Formation actually came from the overlying Cusseta Sand or the mixed bed between the two.

The question rests on Unit 4 of the below section...
To again quote Schwimmer (26/Jun/2020); "I now place the base of the Cusseta at the base of unit 4: Unit 3 is definitely in the Blufftown. Unit 4 contains a mix of Blufftown and Cusseta fossils, which means it includes reworked material from the Blufftown, since you can't deposit stuff downsection, only up. The problem is, given the sequence stratigraphic (SS) model which is standard modern science, I can't be sure whether the material in 4 represents a former Blufftown layer that was completely eroded, transported to the ocean, density sorted with bone concentration, and then redeposited (which is called a 'starved sediment tract' the SS model), or should be assigned simply in total to the Cusseta. But for simplicity, I would place the base of the Cusseta at the base of 4." 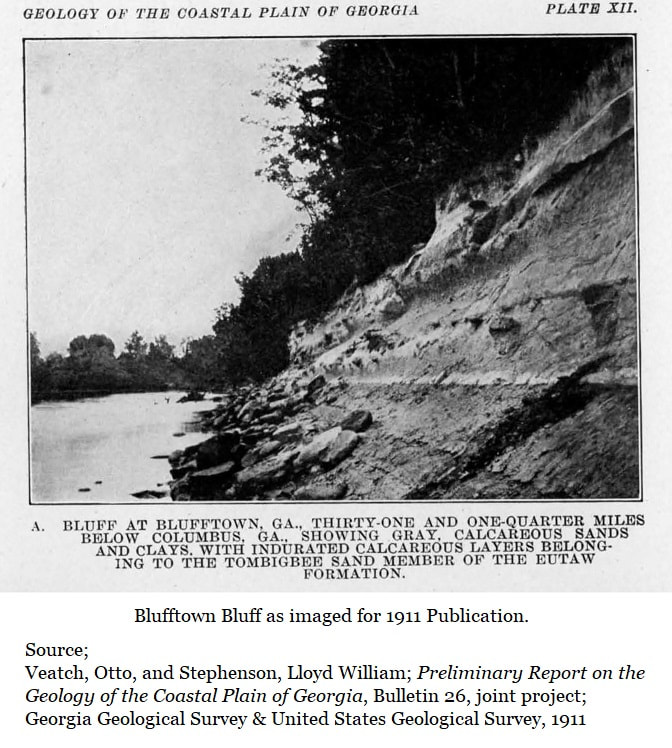 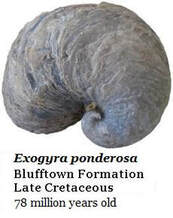 ​Over Lyell’s return trip in 1845, Veatch & Stephenson report his observations from Columbus, GA; “…the rapids of the Chattahoochee are well seen from the bridge… the geologist… may see exposed to view, not only the horizontal Tertiary strata, but the subjacent Cretaceous deposits, containing ammonites, baculites, and other characteristic fossils. These organic remains are met with some miles below the town, at a point called Snakes Shoals…” (2,pg.67)

Note; The rocks and rapids are still present where the Chattahoochee River passes through Columbus, but what used to be Snake Shoals is long drowned. In 1962 Walter F. George Dam in Fort Gaines, GA was completed, and Snake Shoals lies beneath the northern end of the Walter F. Georgia Reservoir, as were some of Georgia’s most productive fossil beds. 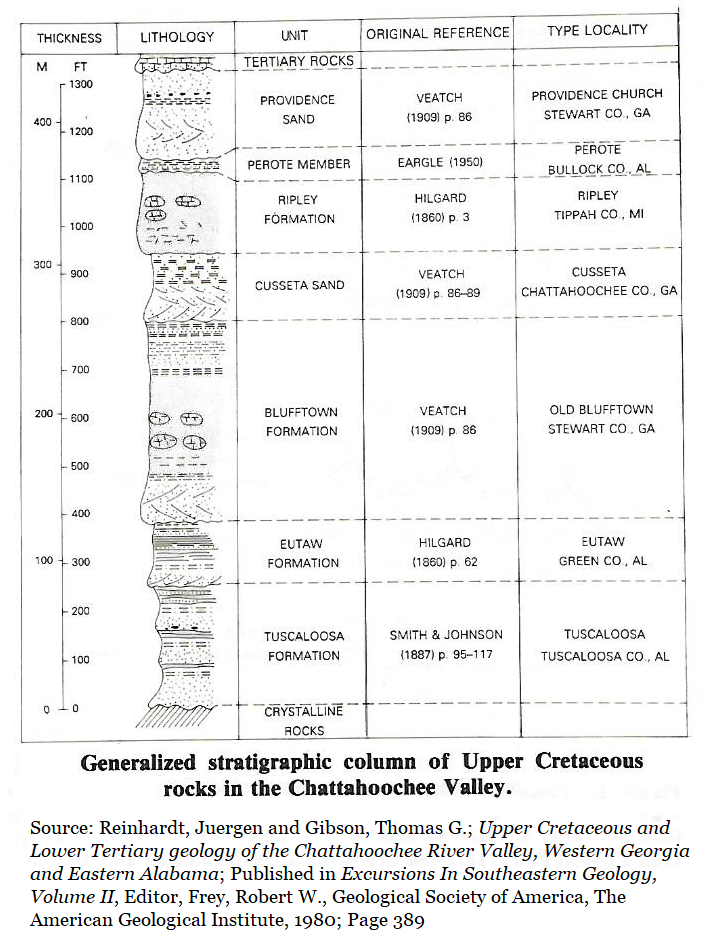 The 1911 report continues (2,pg.151)
“…Fossils are common as shells or shell prints and at various levels are sufficiently abundant to form shell marls. The shallow marine phases contain in places numerous fragmentary bones of dinosaurs, mosasaurs, crocodiles, and turtles, together with occasional reptile teeth, great number of shark teeth of several species and a few other fish teeth.”
​
Veatch and Stephenson preserve reports of other dinosaurs, though no identification information is offered on most dinosaur remains, they were all very fragmentary. Fossils were collected from the; “…Chattahoochee River, between Upper and Lower Roods Bend, and just above mouth of Soapstone Creek. Capt. J. W. Singleton was the collector; the fossils were identified by C. W. Gilmore.” (2,pg.159)
Various fragments of the turtle, Taphrosphys (?)
Fragment of dinosaur limb bone
Vertebra of mosasaur reptile
Tooth of large crocodilian, probably Polydectes
Coprolites
​ 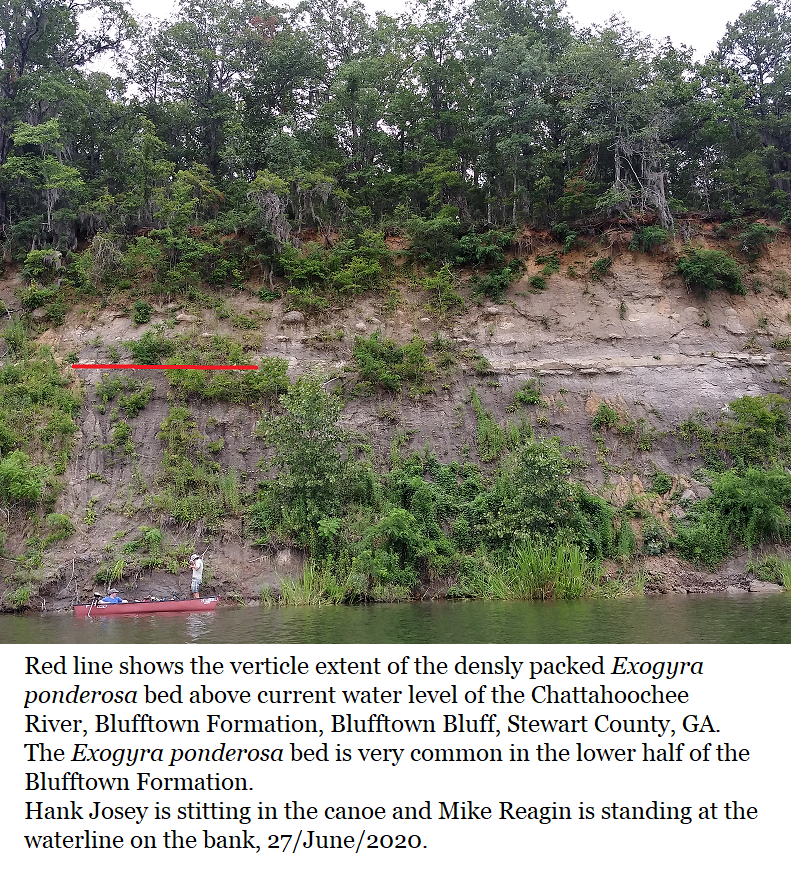 Early Mistakes In Dino ID
In the early 1980s Dr. David Schwimmer at Columbus State University confirmed the presence of dinosaurs in the Blufftown Formation. There’d been some confusion and questions in the intervening years. Edward Drinker Cope, the famous American paleontologist of the Victorina Age was a well-established expert in dinosaurs. As Schwimmer explains (1) in 1878 Cope wrote that the Georgia Geological Survey held in its possession bones identified as belonging to the dinosaur Hadrosaurus tripos. These specimens are lost to history and there is no known illustration of it. Sadly, to quote Schwimmer’s 1981 paper; “To compound the problem, the taxon Hadrosaurus tripos, to which Cope assigned the Georgia dinosaur material, was originally based on his mis-identification of two Cenozoic whale vertebrae from North Carolina. (see Lull & Wright, 1942; Baird & Horner, 1979)” So, unless someone can produce those lost fossils, the Hadrosaurus tripos report must be dismissed as unsupported.

Blufftown Formation (Defined & Described)
The Blufftown Formation occurs in both the Georgia and Alabama walls of the Chattahoochee River valley and in several of the feeder creeks as well. It stands between 120m to 180m (400ft-600ft) thick and is a nearshore marine deposit rich in black to green-black sands. (4,pg.400) Westward the Blufftown extends well into central Alabama. Eastward it extends to within 2.4km (1.5 miles) of the Flint River where the beds thin and become exceedingly difficult to distinguish between the Cusseta Sand.

​The Blufftown was believed to be Campanian Stage in age (Campanian Stage spans 83.5 to 70.6 million years ago) so say roughly 77-million-year-old. But David Schwimmer reports that early suspicions were confirm that the base of the formation is older; extending downward into the uppermost Santonian Stage, so about 84 million years old.

The Blufftown overlies the Eutaw Formation which dates to the Santonian Stage (85.8 to 83.5 mya). There are ammonites in the Eutaw which suggest it might be late Santonian, so roughly 80 million years old. (4, pg.398) The Blufftown underlies the Cusseta Sand Formation which dates to the late Campanian Stage to early Maastrichtian Stage. (Maastrichtian Stage spans 70.6 to 65.5 mya.)
​ 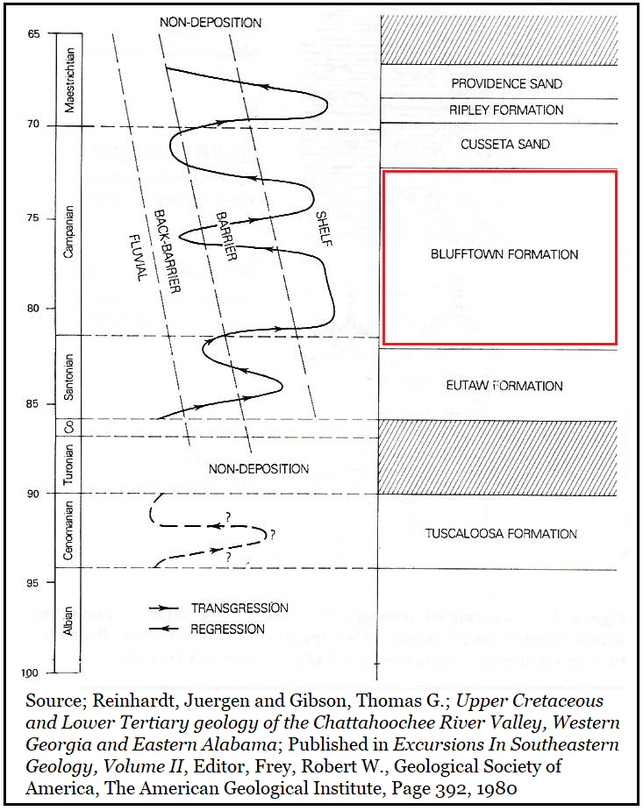 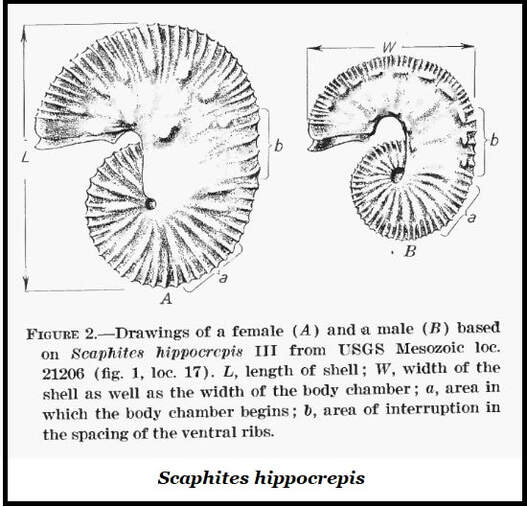 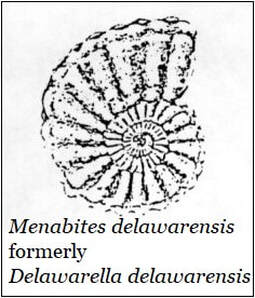 The bed of densely packed Exogyra ponderosa oysters also occurs in the lower half of the Blufftown. Biostratigraphic researchers note the occurrence of the ammonites Menabites delawarensis (formerly Delawarella delawarensis) and Scaphites hippocrepis in the middle and upper parts of the formation. These are index fossils. The emergence and natural history of Scaphites hippocrepis is especially well documented and specimens recovered by biostraitgraphers in 1980 (Reference 4, pg.400) were confirmed as Cobban’s type III, which is distributed from New Jersey to Texas and has been assigned to early (but not earliest) Campanian age, this confirms an approximate age of 77 million years for the upper Blufftown Formation.​ 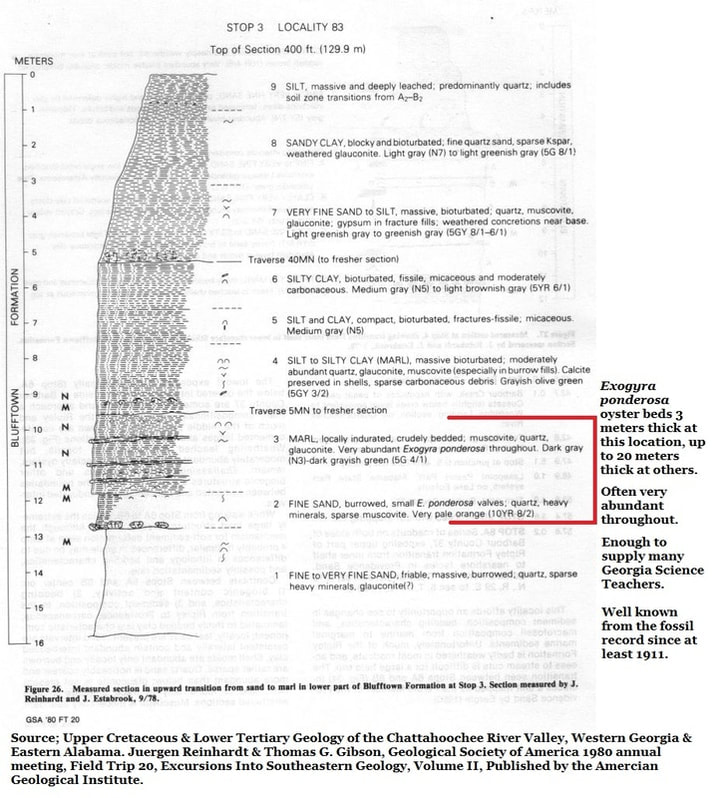 ​Schwimmer also noted that the geographically limited, large oyster species, Crassostrea cusseta as occurring in the Blufftown Formation. He studied one Stewart County, GA location where a very rare bioherm (mound-like reef) of interlocking shells represents the first & only discovery of this rare species living positions. (1) Imaged here are small specimens Hank Josey collected in a secondary deposit, Schwimmer reports 14" long specimens  he collected from the bioherm which are housed in the research collection of Columbus State University.
​ 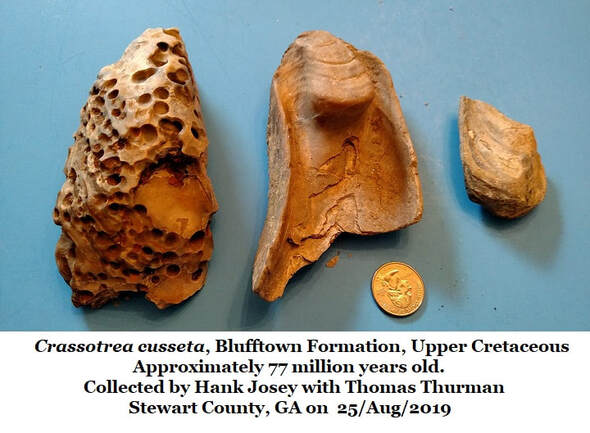 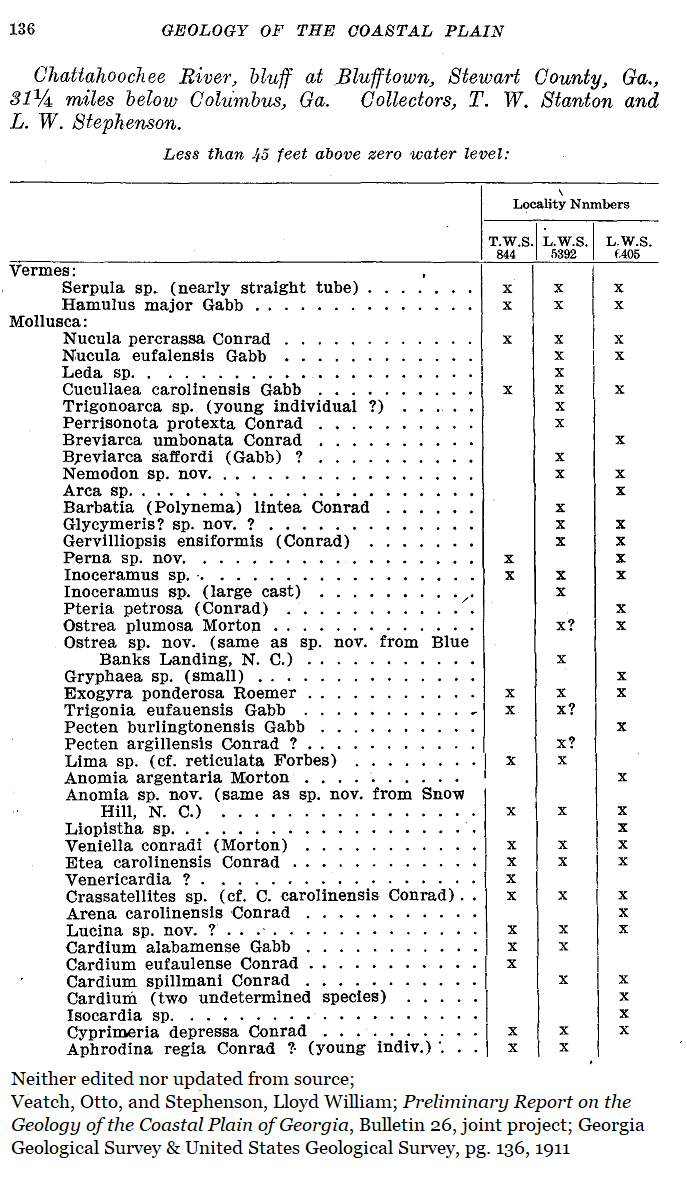 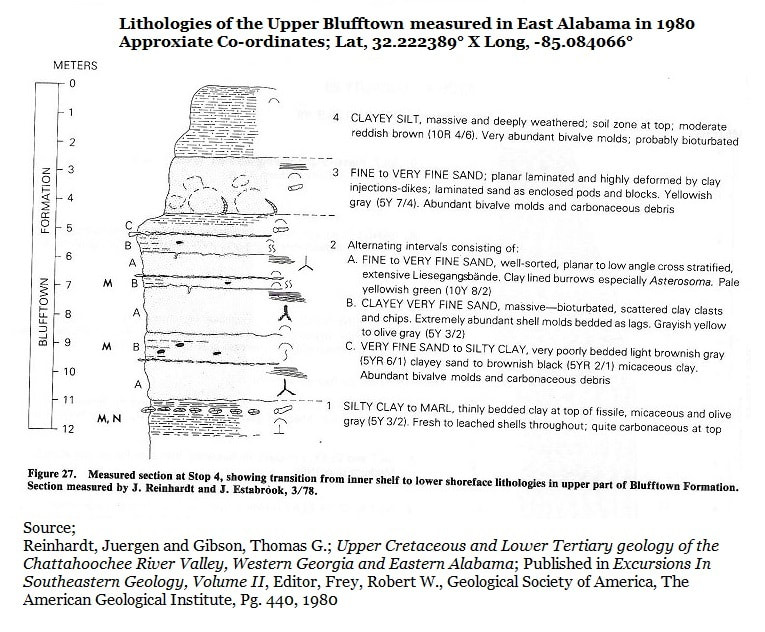 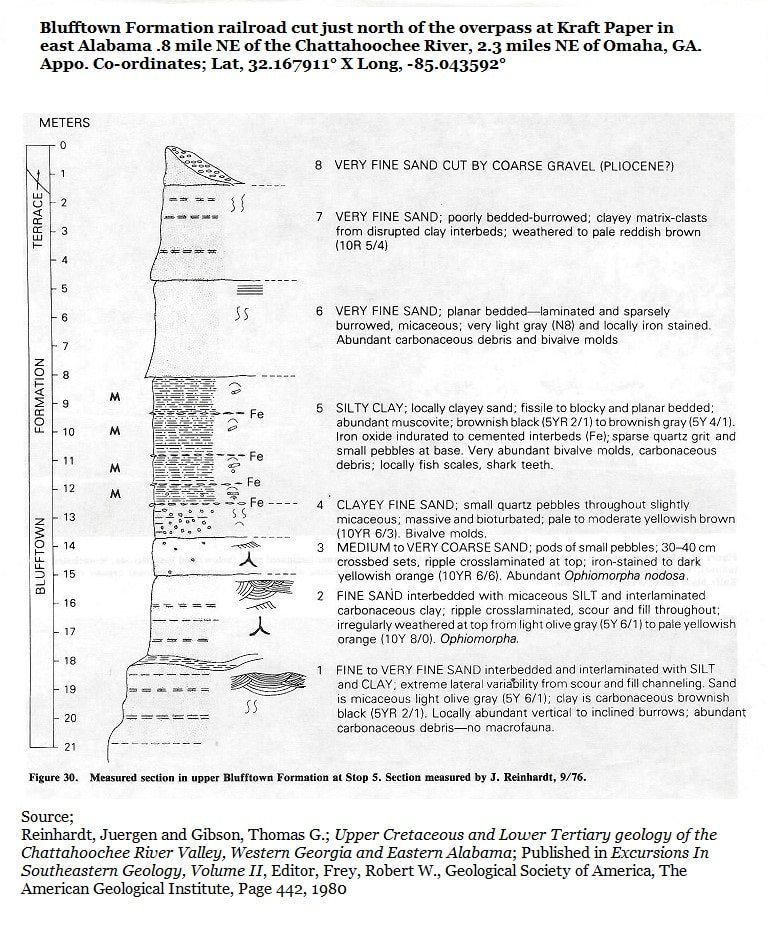 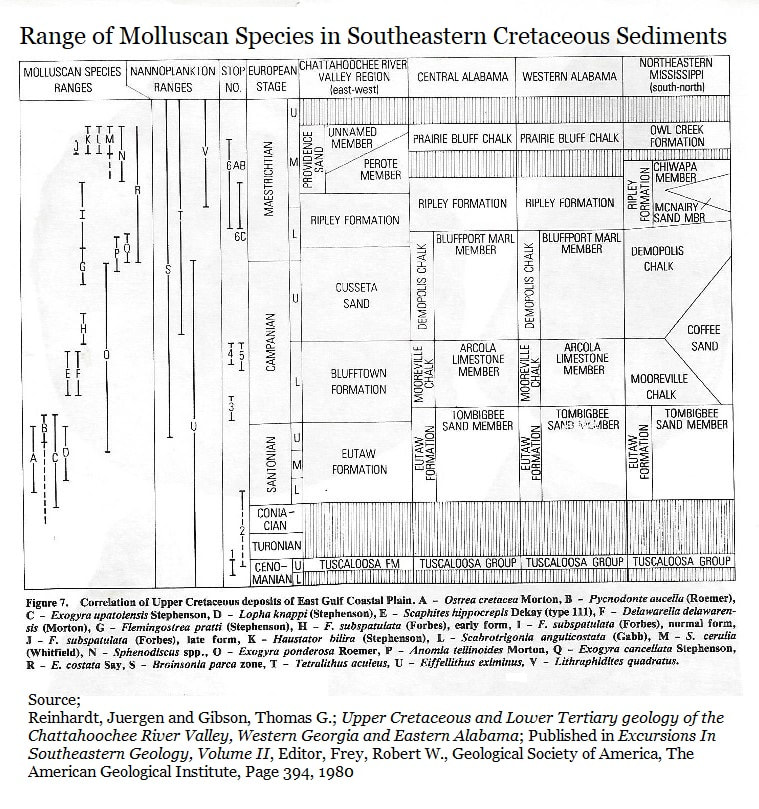 ​Correctly Placing The Fossils
To quote Schwimmer
“…all of the Appalachiosaurus material comes from the Cusseta, as does Exogyra erraticostata and Crassostrea cusseta.”

“Deinosuchus definitely occurs in both formations, along with Xiphactinus.”

“So far, all the Megalocoelacanthus remains (few) are in the Blufftown.”

“In Hannahatchee, all the hadrosaur fossils (teeth and bones) are from the Cusseta, but just across the river (Alabama) we have a lot of hadrosaur material in the Blufftown.”

The author assumes the host of fish teeth from Hannahatchee Creek, both shark and ray-finned fish, also come from Unit 4 listed above, the Cusseta Sand Formation. Though as Schwimmer explains, Xiphactinus is also known from the Blufftown. 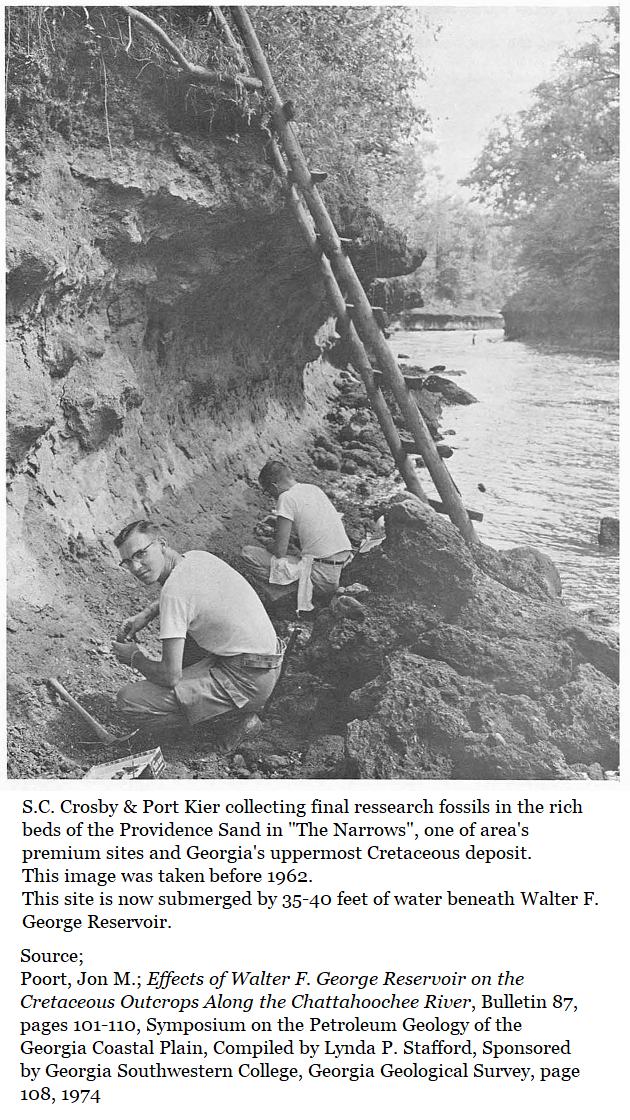 In 1974 Jon M. Poort of West Georgia University published a report entitled “Effects of Walter F. George Reservoir on the Cretaceous Outcrops Along the Chattahoochee River”. That paper appears in Bulletin 87 of the Georgia Geological Survey. Bulletin 87 is entitled; “Symposium on the Petroleum Geology of the Georgia Coastal Plain”. I need to thank Burt Carter at Georgia Southwestern for making me aware of this publication. I never would have looked at a petroleum geology publication to find a paper about a dam’s impact on Chattahoochee River valley fossils outcrops.
Poort reports that the Chattahoochee River contains nearly 130km (80 miles) of continuous Cretaceous outcrops exposed in the river bluffs, this include the Blufftown Formation and several others. The Cretaceous material is overlain by Paleocene deposits as well as other Tertiary sands and Pleistocene terrace deposits. Because of a gentle southern dip in the Cretaceous strata a complete stratigraphic section could only be assembled as a composite.

He states; “…all of the outcrops are buried under many feet of water for 16 miles (km) up to the famous Eufala Bluff site...” (3)
​Poort concludes… (Pg.107,3,1974)
“The river valley of the Chattahoochee, which for so long was looked to by geologist as a means of studying a nearly continuous cross-section of Upper Cretaceous strata in the Coastal Plain, is now flooded and its geological utility is lost. There are still some good paleontological collecting localities and measurable outcrops far up the tributaries or along reservoir flanking roads for the Providence (Sand), Ripley (Formation), Cusseta (Sand), and Blufftown (Formation), but they are scattered and not uniformly accessible. The Eutaw and Tuscaloosa can still be partially seen in river outcrops, but better outcrops are available in areas adjacent to the river.”

Still, despite the loss, Georgia is still very full of fossils!
​
​Characteristic Bivalves of the
Upper Cretaceous Rocks of the
Chattahoochee River Valley​ 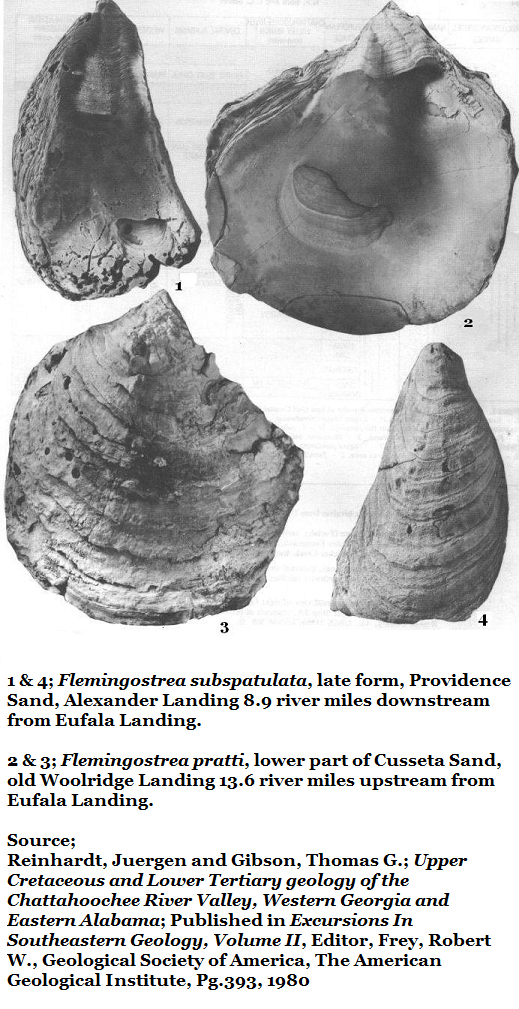 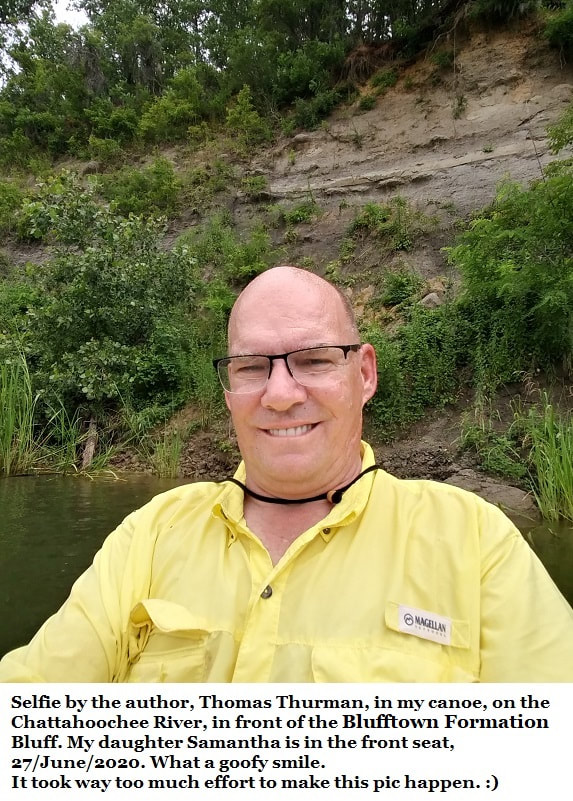 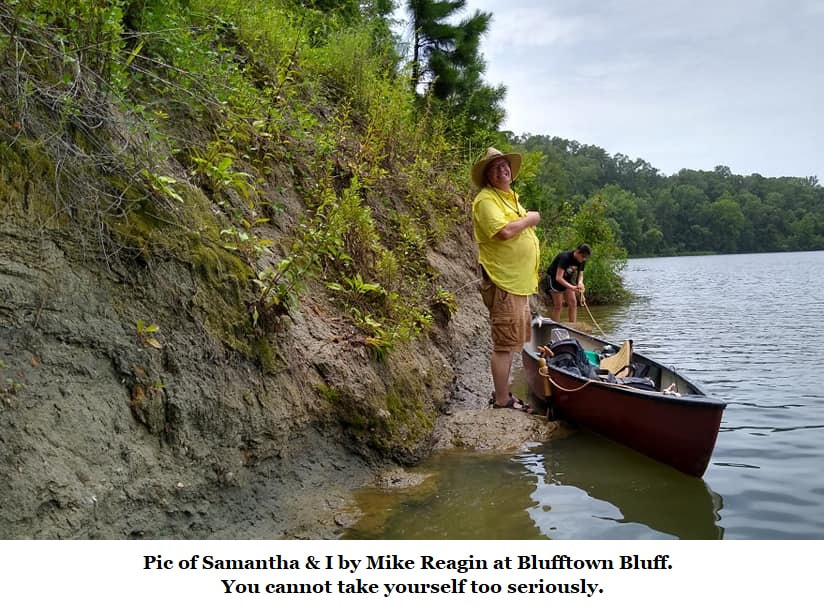