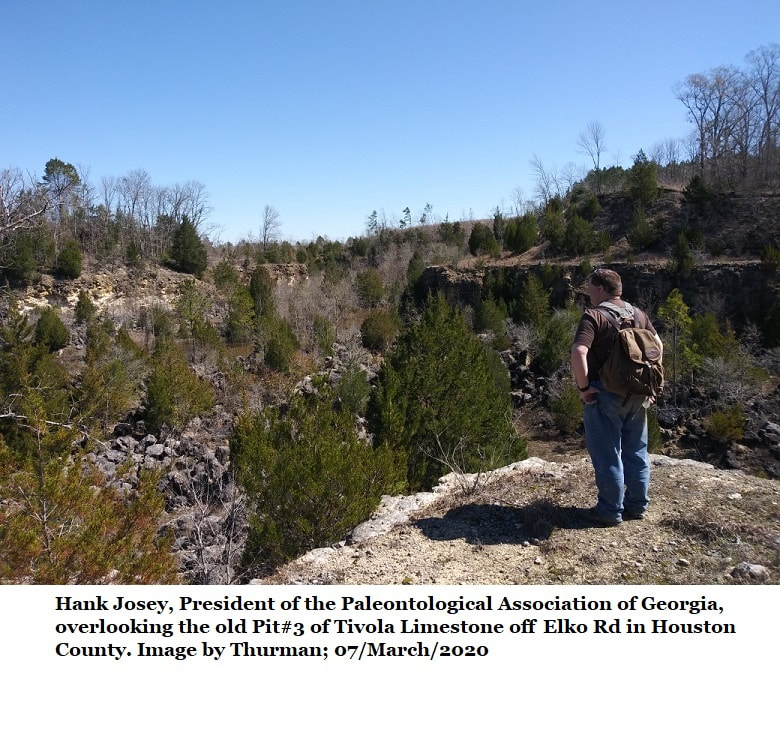 ​The fossil rich Tivola the largest limestone deposit occurring in Houston County. It has long been mined. In 1911 there were already “old” limestone quarries just south of Perry (1).
​To date it’s produced two historically and scientifically important early whale fossils; in 1911 Veatch & Stephenson reported an important find in the Tivola of Bonaire and then in 1937 another was recovered which went on to become part of the displays at the Smithsonian Museum of Natural History in Washington DC. (See section 12F of this website).
​ 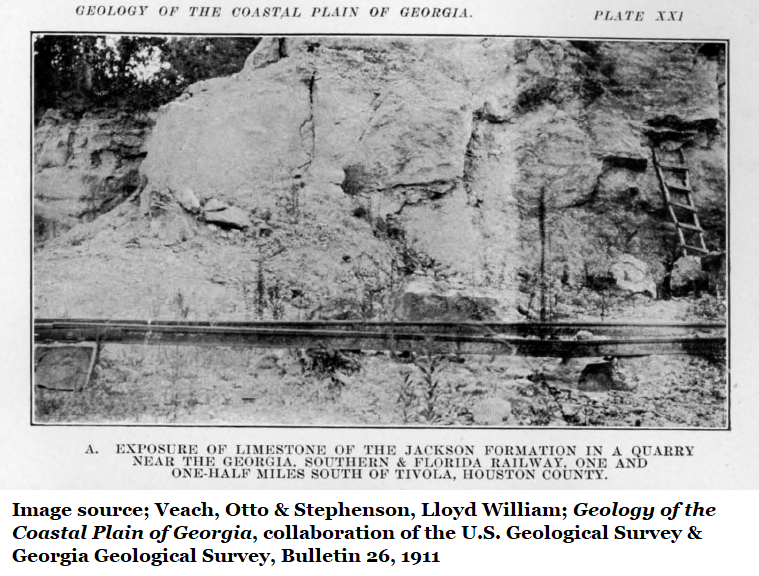 ​The limestone doesn’t typically produce enough forams for accurate dating but the overlying Twiggs Clay does, and it’s been dated to an upper limit of 34.35 million years age (mya) by the presence of the foram Textularia hockleyensis. Since the Tivola is beneath the Twiggs Clay, and was already in place when the Twiggs Clay was deposited, it’s older. 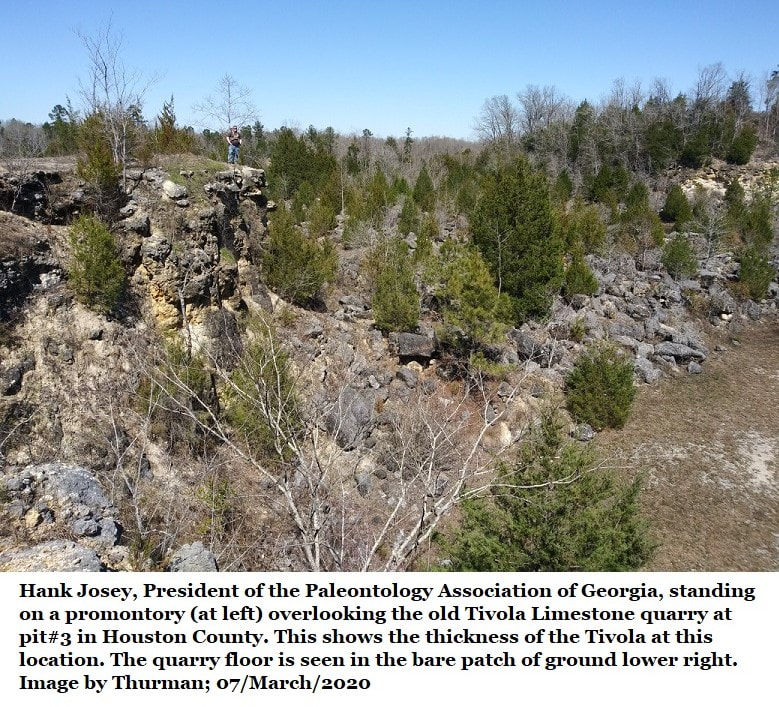 Beneath the Tivola is the underlying Clinchfield Formation. It’s also be dated by foram content to an upper limit of 35.42 mya by the presence of the foram Texularia didollensis. Since the Tivola is above the Clinchfield, it must be younger. 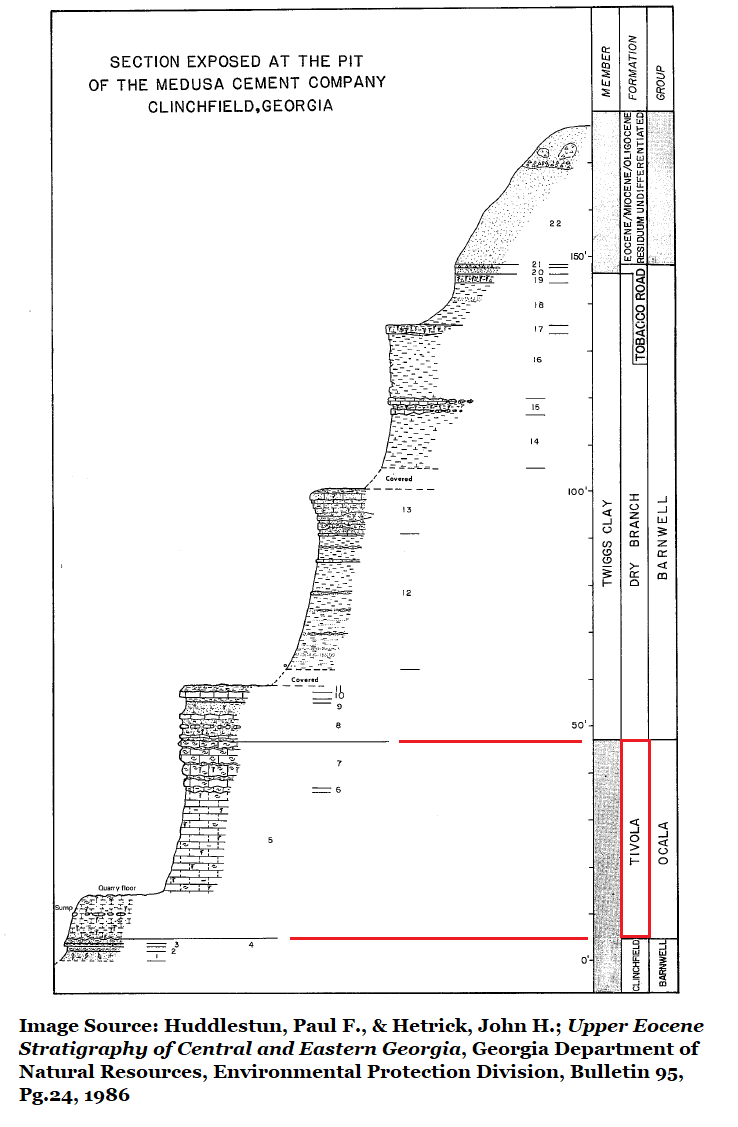 It was deposited in a near-shore, high energy current driven environment. Water depth was likely around 100ft or within the photic zone (where photosynthesis can occur). The shoreline was north of Perry, perhaps as far as Warner Robins or Bibb County. Fossils typically occur in all orientations, suggesting they’d been carried and dropped by strong currents. That said, in the old Elko Road pit conditions seem to have quieted down near to end of the Tivola development as great numbers of Periarchus pileussinensis occur, in the uppermost Tivola, even stacked like pancakes and in living positions. Still, in almost all cases bryozoan fossils dominate the fossil suite.​ 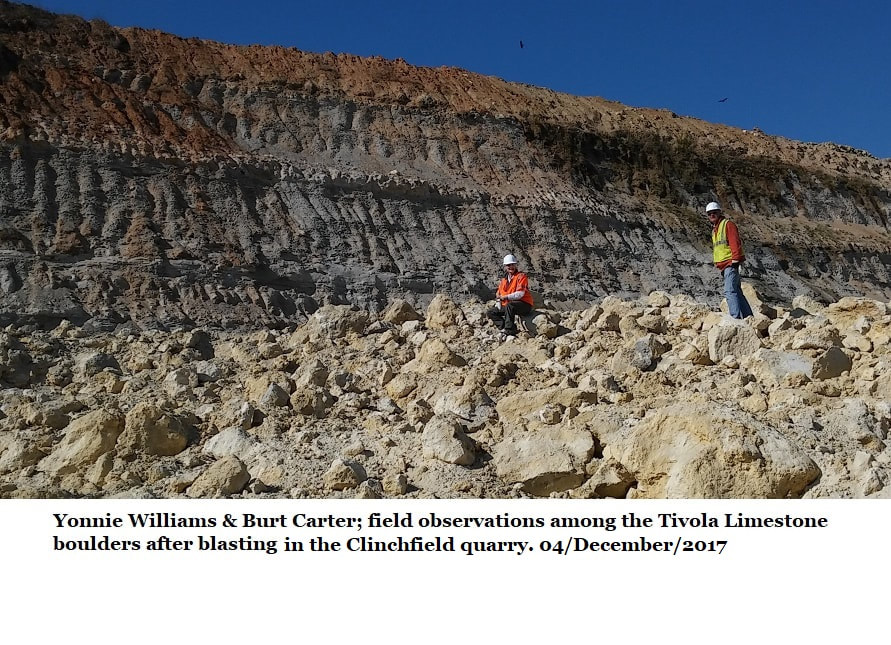 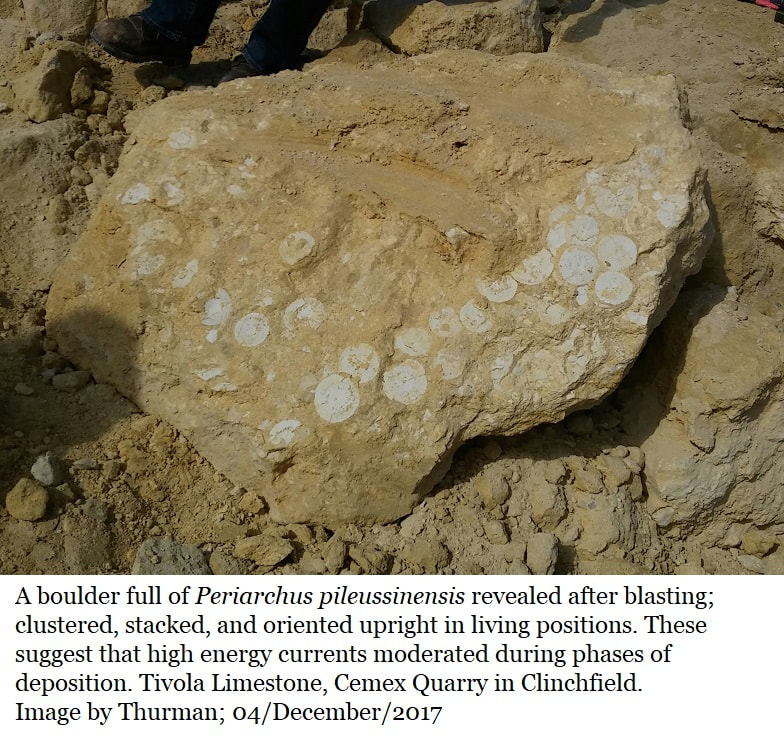 ​Fresh exposures are tan to light, or very light beige. These will slowly darken over time to a grey, and eventually dark grey. Old exposures are usually deep flat black with a rough, coated texture Pickering described as “case hardening”. (2)​ 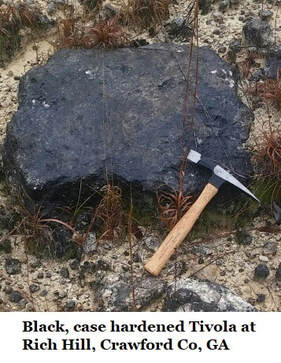 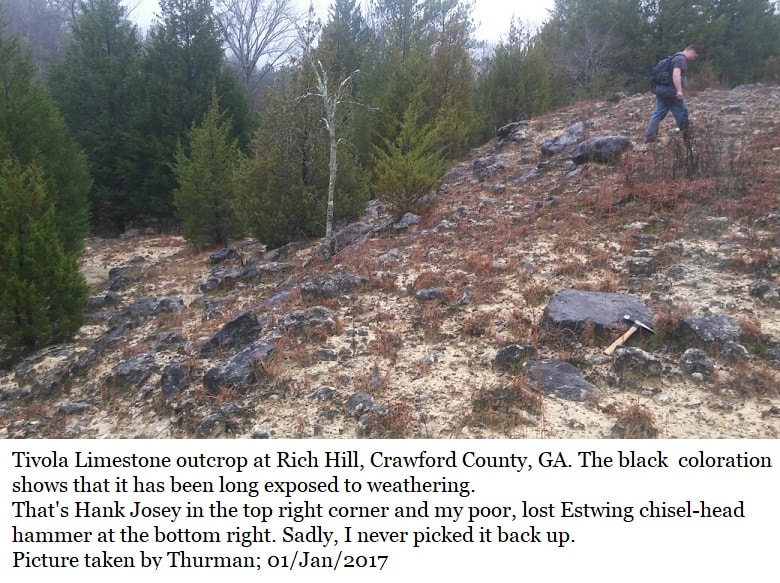 There’s a roadcut on the Fall Line Freeway, just west of the Bibb/Wilkinson County line where the Twiggs Clay and Clinchfield Formation can be observed in direct contact, the Tivola is wholly missing. This is interesting; it tells us that between the deposition of the Clinchfield Formation and Twiggs Clay conditions not only changed enough to allow the Tivola Limestone to be deposited atop the Clinchfield formation, but conditions change enough locally after that, to erase the Tivola limestone before the Twiggs Clay was deposited.
​
​The Twiggs Clay is very fine grained and silty, it was deposited in a very quiet, nearly current free shallow water environment where fine grained, river borne clay minerals could gently settle out along the coastline.

The Clinchfield formation was also coastal, shallow water, and there are some oysters in the Clinchfield which suggest it might have even been tidal. But the Clinchfield is also rich in vertebrate fossils. (See section 14B of this website.) 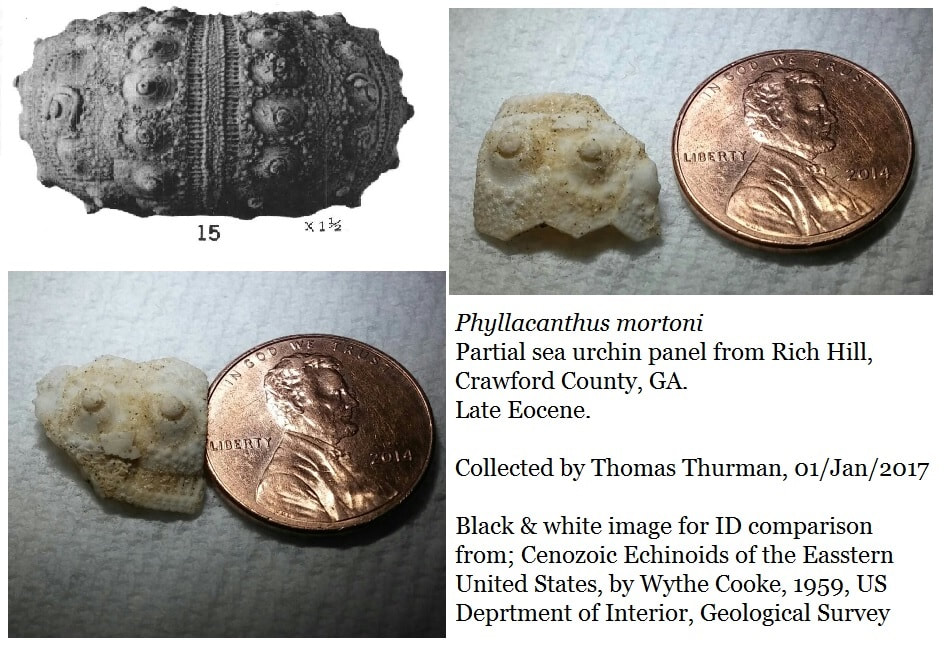 ​In the Tivola there are subtle, but often observable differences in the sediments at different locations. In the current Cemex pits it is sandier and bryozoan populations seem lower than in the old pits along Elko Rd just 3 air miles away. In the more eastward outcrops of kaolin country it tends to have a slightly higher clay content. I’ve only observed the Tivola briefly at Rich Hill, but outcrops there seem to mostly closely match the Elko Road exposures so it’d be difficult to tell the difference in samples.
​ 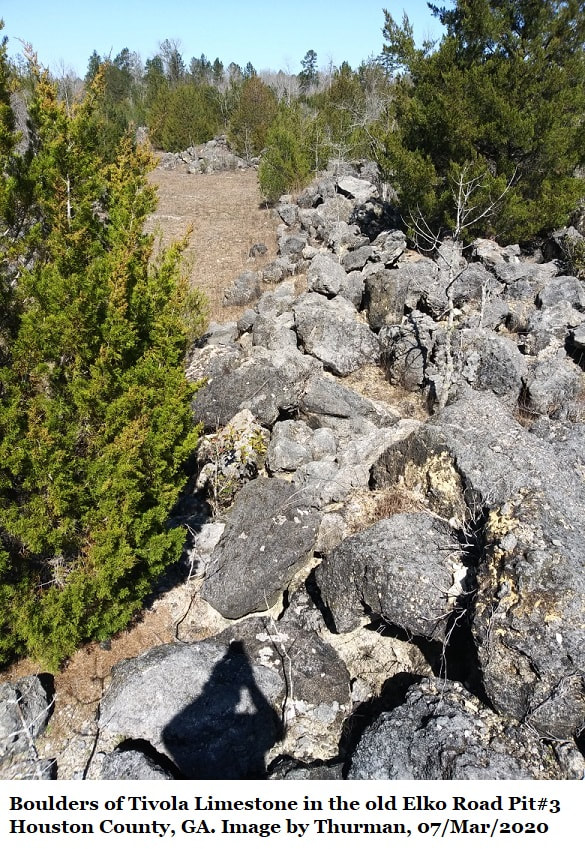 Historical
When Sam Pickering surveyed and described this limestone in 1970 (2) he was specifically reviewing the sediments being quarried in Clinchfield, Georgia in what is now the Cemex Quarry. He followed previous researchers in calling it the Ocala Limestone.

In 1892 Dall described and named the Ocala Limestone for outcrops in Marion County, Florida. In 1911, Georgia researchers Veatch & Stephenson incorrectly correlated the Florida’s Ocala limestone to the limestone currently quarried in Clinchfield, Georgia.
​ 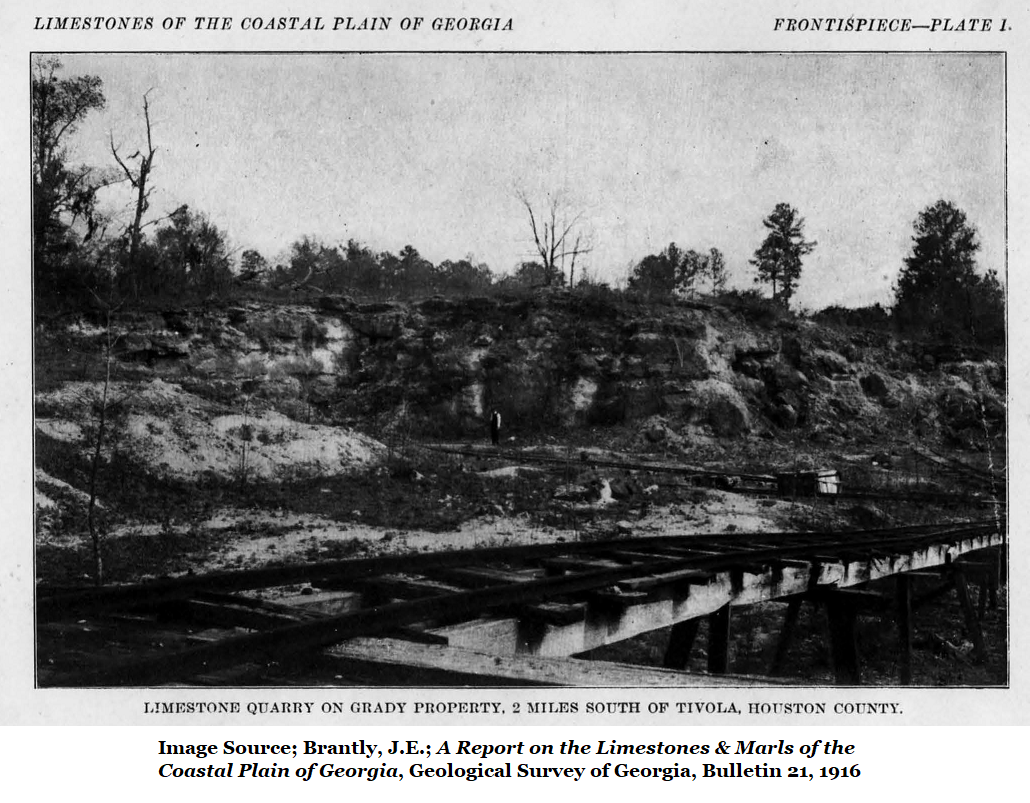 Paul Huddlestun re-assigned it in 1986 (3) and designated it the Tivola Limestone of the Ocala Group. It was named for the tiny, now extinct village of Tivola whose railroad station once stood just southeast of the modern Purdue Chicken plant near Perry. Huddlestun reports that the Tivola Station stood approximately where AE Harris Road crosses the railroad tracks. Also in the Ocala Group is the more recent and distinct Ocmulgee Formation. 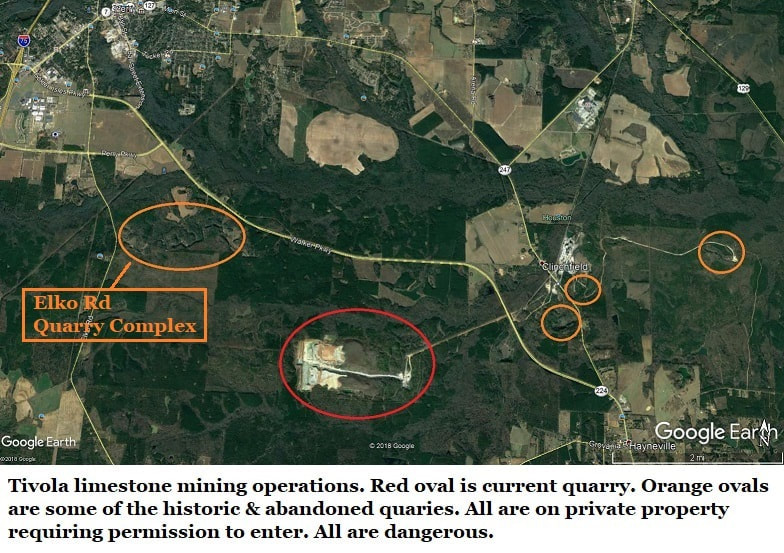 The Tivola is 89% to 97% calcium carbonate (2), meaning that it is mostly organic material, and much of this is debris from bryozoans. Bryozoans are so abundant that Huddlestun referred to the Tivola as a “coquinoid bryozoan limestone.” (3) Coquinoid mean coquina-like. Coquina is a limestone composed almost entirely of fossil debris. The remaining content of the Tivola is sand and clay, which is variable depending on your location and vertical position in the sediments.

It has been described as alternating beds of hard and soft limestone but this isn’t so obvious in field observations. The softer limestone is a fossil hash with what Pickering described as a fine matrix of calcareous silt. The hard limestone is a coquina of large fossil fragments in a partially recrystallized matrix.

Below is a partial list of species occurring in the Tivola Limestone beginning with vertebrates. This is only a sampling from published research. 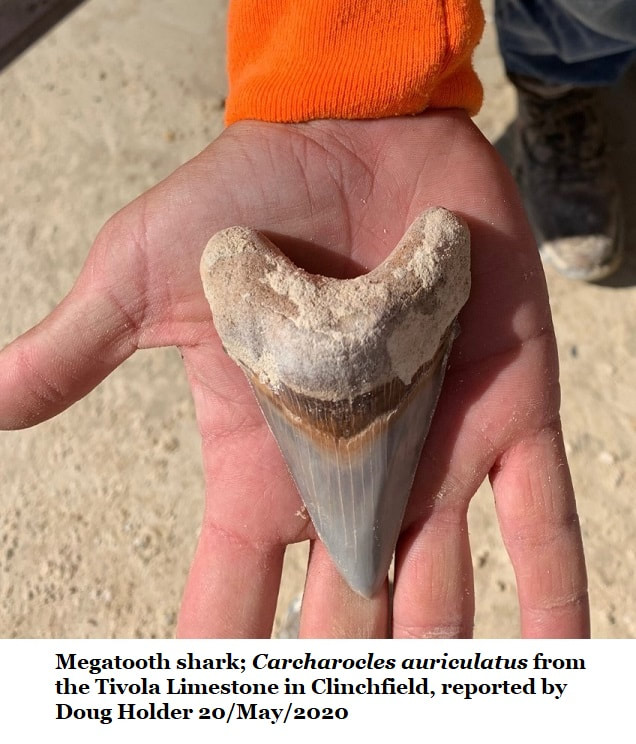