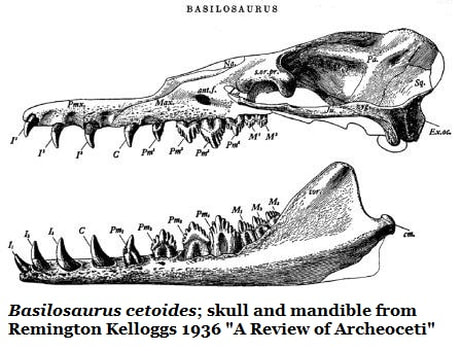 In 1894 Charles Schuchert, the Smithsonian’s Curator, went to Alabama and collected the first complete, scientifically accurate Basilosaurus cetoides specimen which is still on display at the Smithsonian National Museum of Natural History, over the years the reconstruction has be adjusted a few times to concur with modern research. A cast of this specimen is on display at the Alabama Museum of Natural History.

Easily the most famous member of the family Basilosauridae family is the great whale Basilosaurus cetoides, the State Fossil for both Mississippi and Alabama. Basilosaurus cetoides is also a relatively common fossil in Georgia, frequently present in the overburden of kaolin mines and known from some limestone mines. A famous specimen came from Houston County, GA. (See Section 11F of this site; Houston County Basilosaurus to the Smithsonian National Museum of Natural History.) 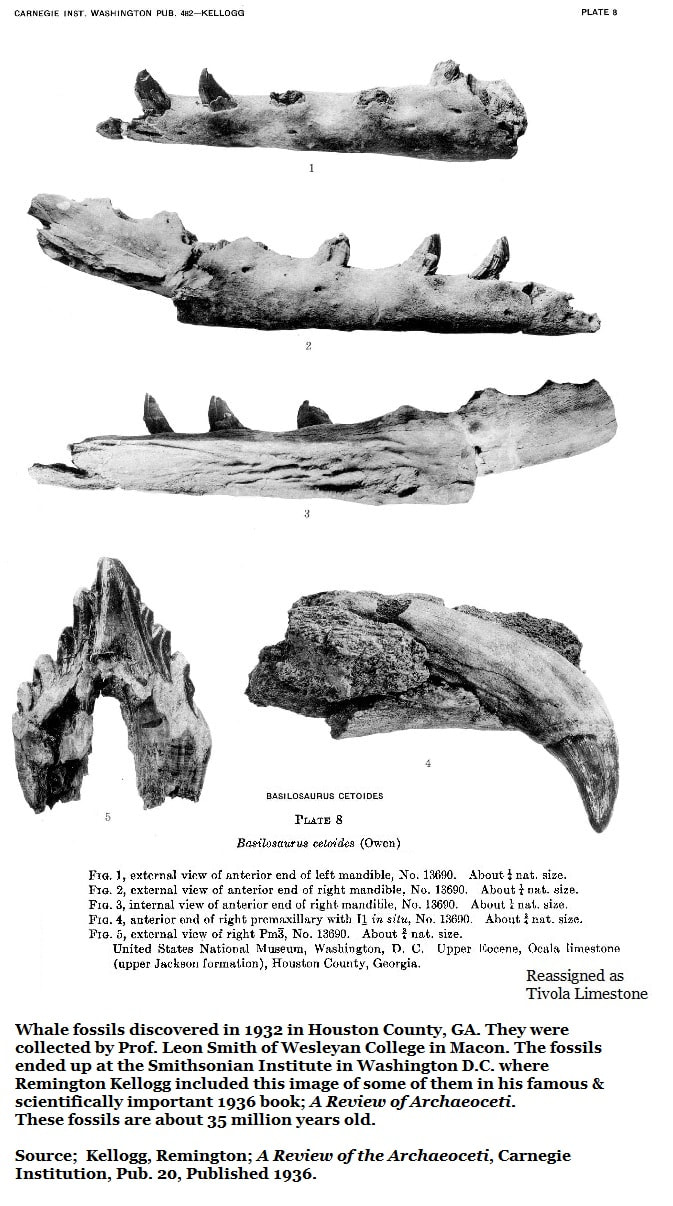 The species is considered the first great whale. Twenty meter (65 foot) individuals are known; the average seems to be between 12 to 20 meters (40 to 65 feet) in length. Just the skull of this predator was about two meters long.

The name Basilosaurus means king-lizard, when the first specimens were described from Louisiana fossils by Richard Harlan in 1834 (an American naturalist, zoologist, paleontologist & physicist) he misidentified it as a reptile; as a plesiosaur to be precise.

Sir Richard Owen, the famous English biologist, paleontologist and comparative anatomist (who coined the term dinosaur) tried to officially have the name changed to Zeuglodon (meaning yoke-tooth, which certainly applies). Though you’ll occasionally run across the name Zeuglodon in scientific text, especially older text, the change didn’t stick. In 1911 Veatch and Stephenson used the genus name Basilosaurus. In 1936 Remington Kellogg used the name Zeuglodont. Basilosaurus is now held as proper and accepted. 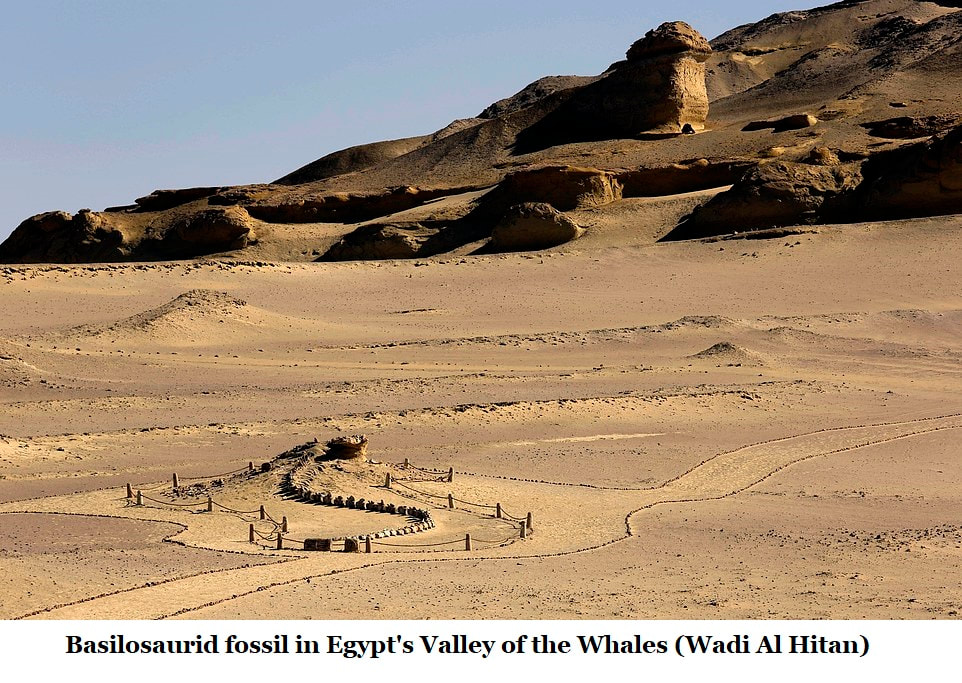 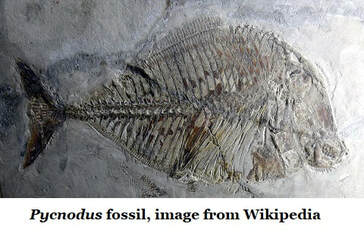 The stomach content fossils belongs to a juvenile whale Durodon atrox (See; Section 12; Ziggy & the Museum of Arts & Sciences in Macon, GA) and a Pycnodus mokattamensis, a large species of ray finned fish.

This is interesting as Ziggy, the Durodon serratus fossil at the Museum of Arts & Sciences in Macon, Georgia, also included fossils...

Billy Christy Jr. was preparing for college at the time of the  discovery and recovery of Ziggy and actively participated in both. He reported that while cleaning the Twiggs Clay from the fossils in the UGA lab he discovered two and a half small sand shark’s vertebrae stuck to the ribs, and some shark teeth. We don't know species of sand shark; there are several known to occur in the Twiggs Clay. This material has since been lost.

The presence of small shark vertebrae stuck to the Ziggy's ribs could certainly be interpreted as a final meal.

The Egypt report by Voss would seem to support Billy Christy Jr's report.

For the record; Durodon serratus is a smaller species of basilosaurid. 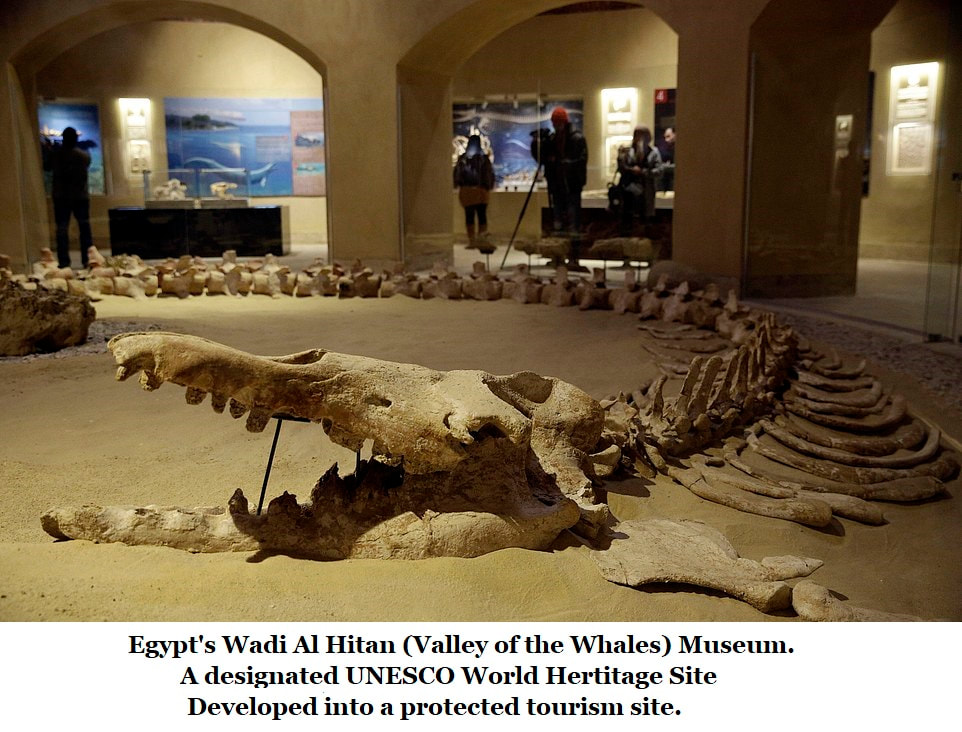 There are many unknowns about Basilosaurus cetoides despite a strong fossil record; primarily how it swam. It is believed that the basilosaurid family in general swam in the manner of modern whales. When compared to other basilosaurids, the vertebrae of B. cetoides are highly elongated and massive; this is the origin of its great length.

Modern whales swim by flexing their backs up and down, so did most of the basilosaurids, and researchers think Basilosaurus cetoides swam in this manner but with multiple gentle “humps” as in the image shown in Mary Parrish’s (Artist, Smithsonian), image seen here.
Flukes
The single “flukeless” basilosaurid is the genus Basilotritus, probably the most basal, or basic, basilosaurid likely lacked flukes. Its hip arrangement is closer to Georgiacetus than the other basilosaurids; suggesting it swam with hind legs.

We simply don’t know when flukes emerged. We do know this; Georgiacetus lacked flukes; that was demonstrated by Uhen. Georgiacetus lived near the horizon of the Lutetian Stage and Bartonian Stage of the Eocene Epoch, about 40.4 million years ago.

Basilosaurus cetoides possessed flukes, and is present in the Priabonian Stage of the Eocene Epoch which began 37.2 million years ago. We are just beginning to understand the whales which occupied that 3.2 million year gap here in the southeast and globally.
​
References:
Basilosaurid Evolution
A Review of North American Basilosauridae: Mark D. Uhen, 2013. Bulletin 31, Vol. 2, Alabama Museum of Natural History, April,1, 2013