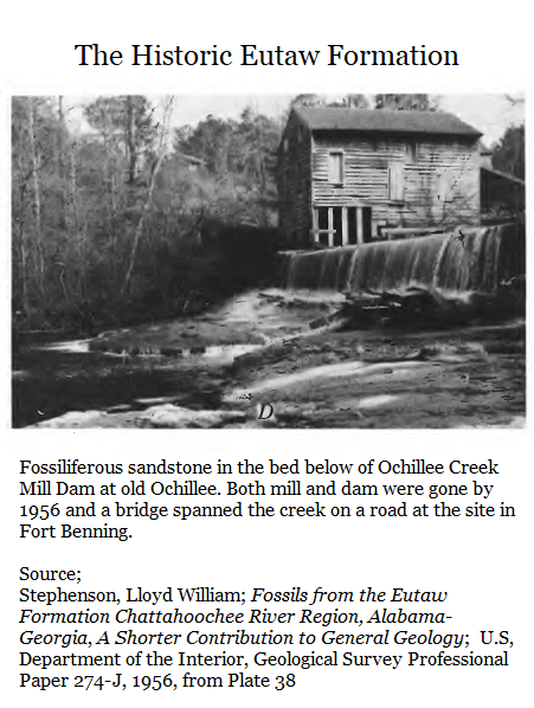 ​Here in Georgia the rare outcrops of the Eutaw Formation can be found between the Blufftown Formation and the Tuscaloosa Formations; the Blufftown is above it and the Tuscaloosa is below it. Juergen Reinhardt (1) and others reported in 1980 that it can be traced in outcrop from its type locality in western Alabama to east of Georgia’s Flint River. Reinhardt’s research dated the Eutaw to 83.6 to 86.3 million years old; this is the Santonian age of the Cretaceous Period. More recent research has focused the Eutaw to approximately 84 million years old.
​ 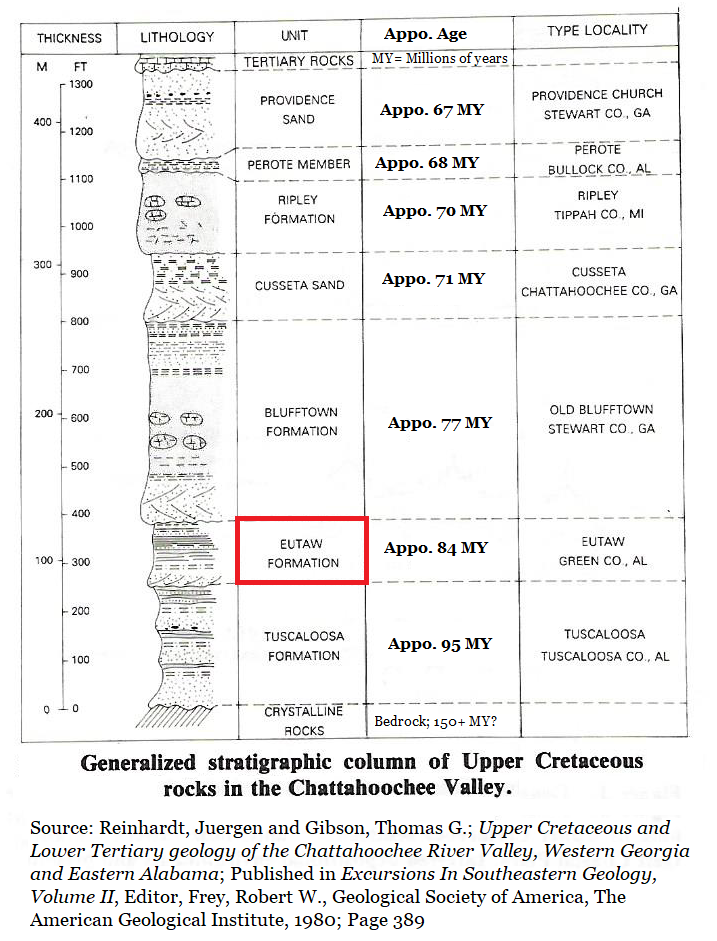 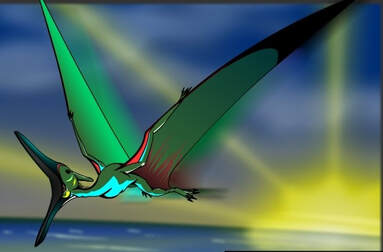 Georgia’s pterosaur, reported by David Schwimmer, came from the Eutaw Formation and remains one of its most famous and important fossils. That discovery is described in greater detail in Section 7A of this website.​
​The Eutaw Formation has long been recognized. In 1911, Otto Veatch & Lloyd Stephenson reported; “Considerable variation has been noted in the character of the materials of this formation, both vertically and horizontally. In the immediate Chattahoochee region they are in the main of marine origin, though a part of them was obviously laid down in very shallow marine waters, and some may even have originated in estuaries or sounds.”
​ 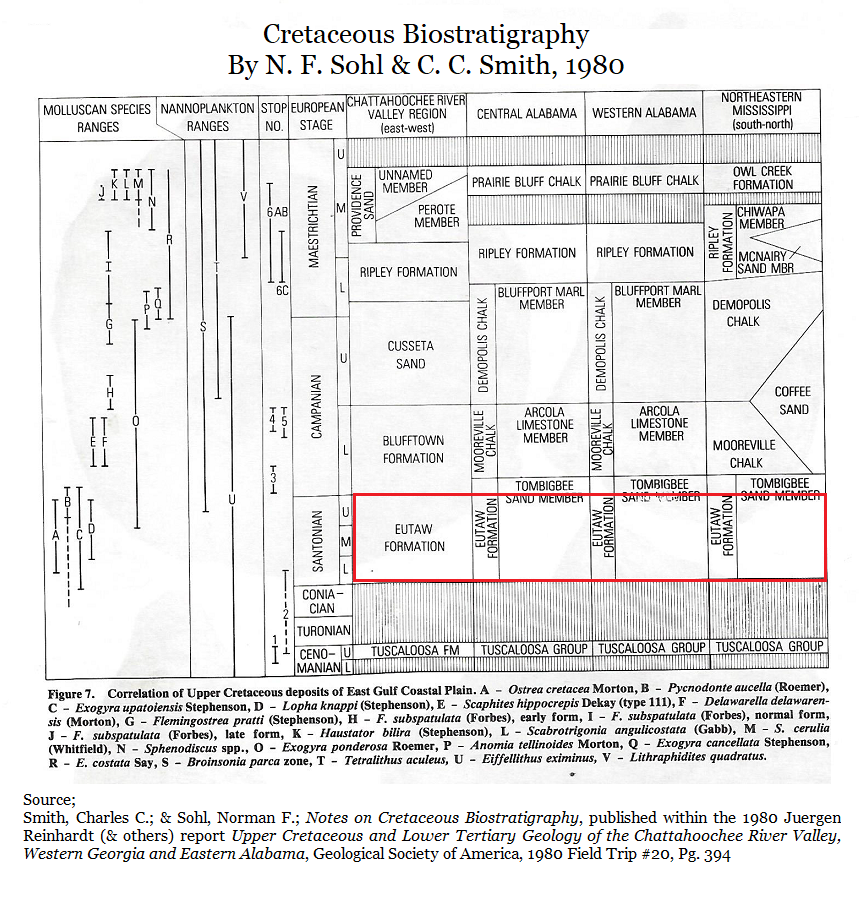 The 1911 report continues to explain that east of the river and deeper into Georgia the formation becomes coarser and more irregularly bedded. This is in Chattahoochee, Marion and Taylor Counties. “Doubtless it originated in shallow water, near shore, or even in sounds and estuaries.”
​
Back towards the river Veatch & Stephenson report that the base of the formation consist of a few feet of coarse, feldspar-rich sandstone and mica-rich sand which resemble the underlying beds. There are lenses of drab to black, laminated, clay bearing leaf remains in places. Scattered through these sands are considerable quantities of plant fossils as lignite (brown coal); 84 million year old twiggs, branches and logs occur.
​ 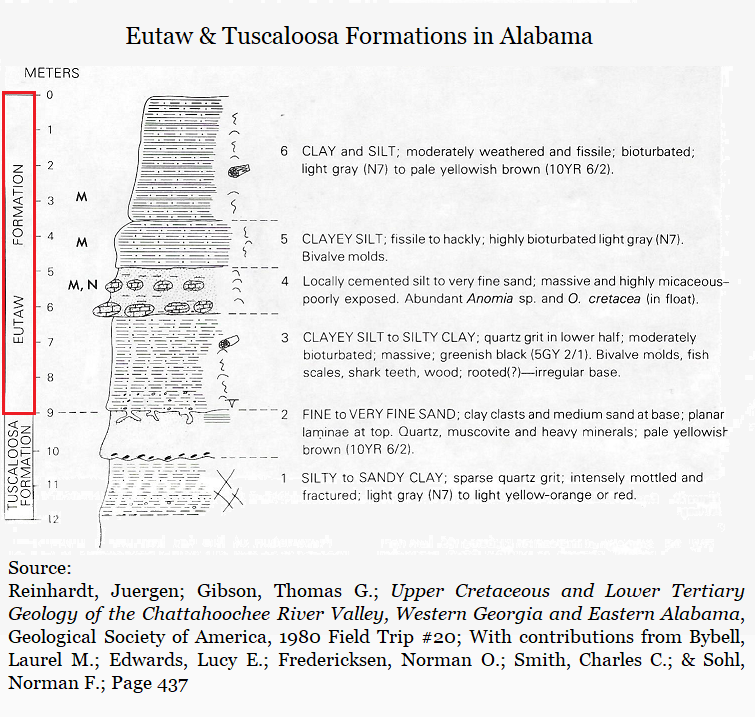 Above this is 50 feet of gray to dark gray sands and clays with scattered layers of nodular, impure limestone. The limestone is fossiliferous, often containing large numbers of marine shells and shell prints.
​On the general paleontology of the Eutaw Formation I will again quote Veatch & Stephenson’s 1911 report….

​“Paleontologic characters - Marine invertebrate fossils are numerous in the lower 100 feet of the formation. Near the immediate base these are preserved as shells, shell prints, and internal casts. In beds somewhat higher they appear only as casts and prints. In the next 300 feet or more invertebrate fossils are rare, but a few soft prints of shells have been observed.”
​“In the massive, marine sands and clays forming the upper 120 feet of the formation (Tombigbee Sand Member) invertebrate fossils are plentiful both as shells and as prints and casts.”
“Vertebrate animals are represented, so far as known, by the remains of sharks only. The teeth of these fishes are present in places in the massive, marine beds near the base, and in the Tombigbee sand member at the top of the formation.”
​
To quote his thoughts in 1956 after four decades of research… (3)
“The Eutaw formation is estimated to be about 200 feet thick in the Chattahoochee River region; it consists mainly of more or less argillaceous (clay-rich) and micaceous (Mica-rich) sand with interbedded layers of calcareous sandstone and concretions but includes some important and lenses of shale.”
​ 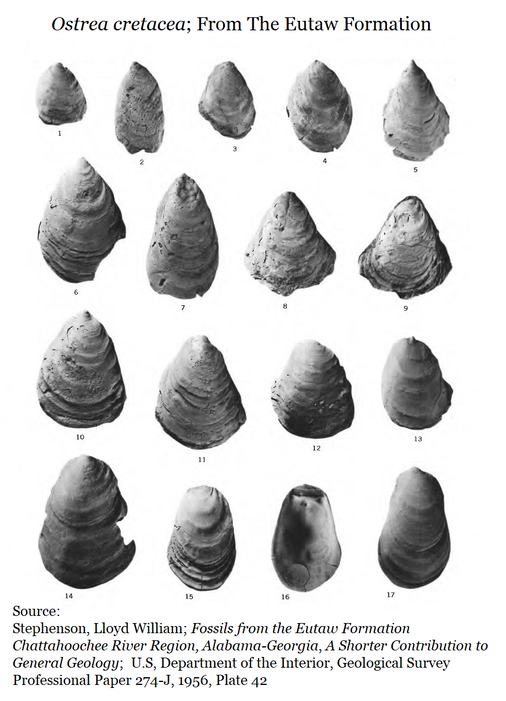 The thickness of the Eutaw is variable depending on location.

Stephenson continues to discuss and describe 16 species of invertebrates which occur in the Eutaw Formation, 15 of which are bivalves and one of which is an ammonite. Ten of these species were scientifically described by Stephenson. 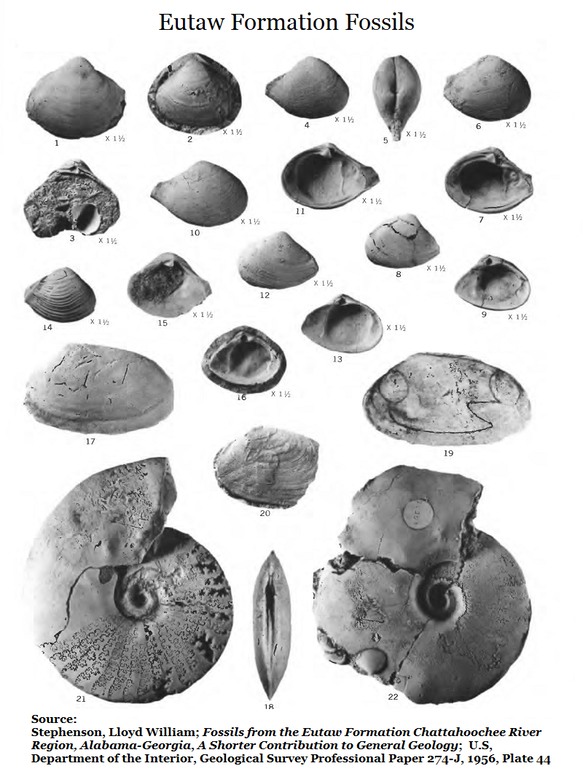 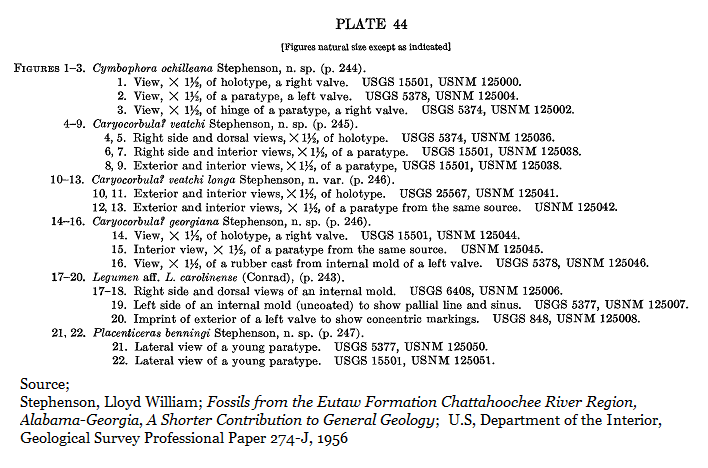 Sadly, the damming of the Chattahoochee River at Fort Gaines, Georgia permanently submerged most of the known Eutaw Formation outcrops in Georgia.

Stephenson repeated reports from his 1911 research with Veatch (4);
​ 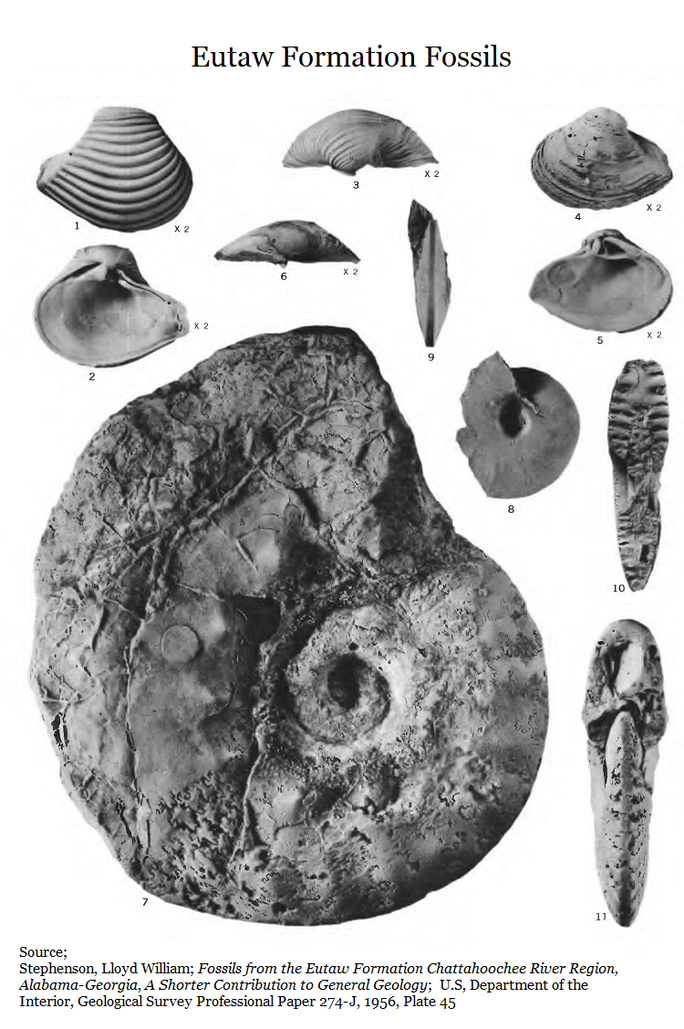 Additional fossils, mostly poorly preserved, belonging to the following genera, have been identified from the Upatoi Creek locality:
Trigonarca
Pholadomya
Cardium,
Tellina?
Turritella
Anchura
Volutomorpha
Several species of shark teeth are present.
​
Section on Ochillee Creek
Strata corresponding to the basal 25 feet of the Eutaw formation in the section on Upatoi Creek are exposed on Ochillee Creek at and near the site of the dam and the old mill at Ochillee, Chattahoochee County, and for several hundred yards both downstream and upstream from the dam site. The bridge of the present roadway is approximately at the site of the dam and mill. These beds are fossiliferous and include some fossils that are in a more complete state of preservation than those found at other Eutaw localities in the Chattahoochee area. A list of the species described from Ochillee Creek is given below.
Protarca obliqua
Pseudoptera securiformis
Ostrea cretacea
Anomia preolmstedi
Legumen carolinense
Cymbophora ochilleana
Caryocorbula veatchi
Placenticeras benningi
​
In addition to the species Stephenson formally described, he also reportedfossils belonging to the following genera from Ochillee:
Serpula (tubes)
Idonearca
Pecten (Camptonectes*)
Etea
Cyprimeria,
Leptosolen
Turritella
Anchura 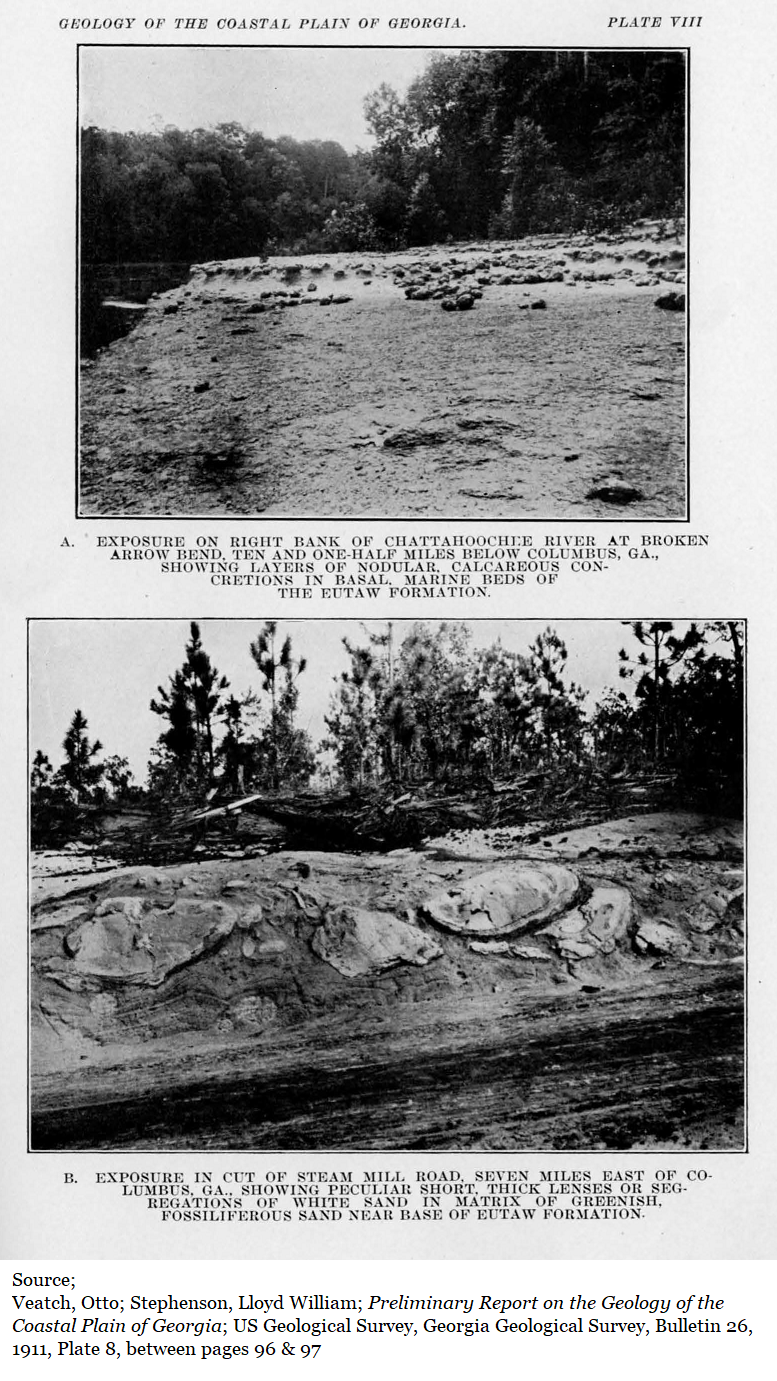 Stephenson further reports in 1956;
“Both the dam and the water mill of former years have completely disappeared from the Ochillee locality. Upstream from the site of the dam there is now exposed in the bed of the creek marine argillaceous sand with irregularly distributed ovate concretions 4 to 8 inches in diameter; these concretions contain imprints and molds of fossils with films of adhering shell substance among which are many individuals of Pseudoptera securiformis & Placenticeras benningi.”

Stephenson’s goal in his 1956 paper was to not only describe new species, but to report species useful in dating and identifying the Eutaw Formation and thus allow researchers to orient themselves in the stratigraphy.