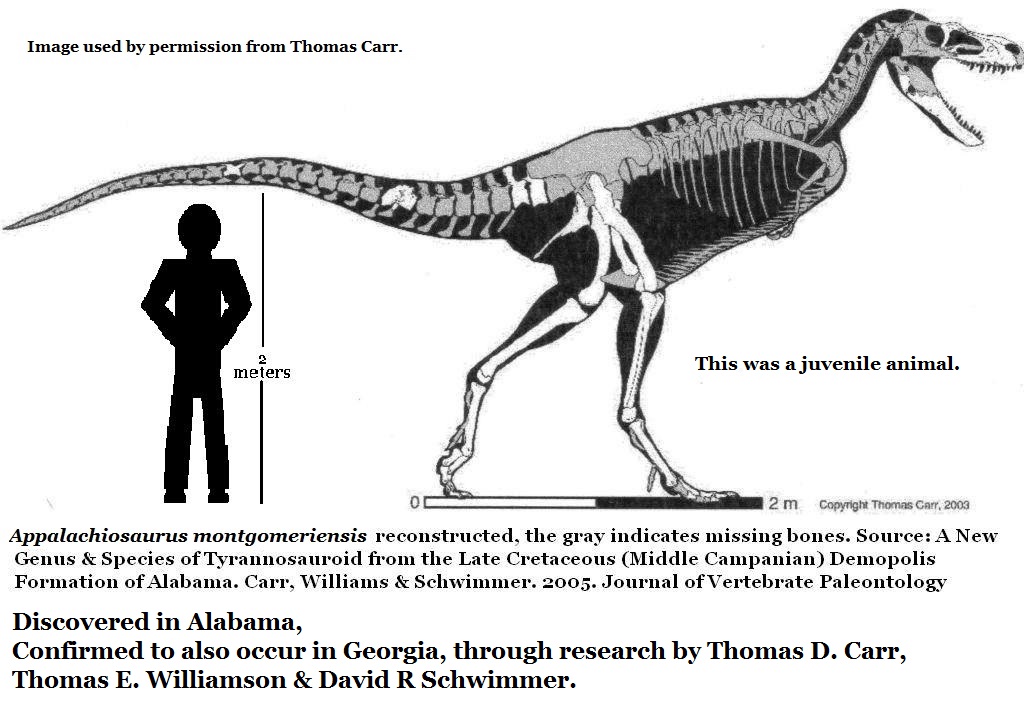 Appalachiosaurus montgomeriensis
The Late Cretaceous, say 77 million years ago, has dinosaurs walking the hills of Georgia; their presence is confirmed by fossils from the Blufftown Formation sediments of Hannahatchee Creek.

It’s believed that the presence of dinosaurs, always land animals, in the marine sediments is explained by individuals swept out to sea and then dismembered by marine predators. As we’ve seen there was no shortage of coastal predators capable of dealing with a large dinosaur carcass or a live animal struggling in the surf.

We looked at the Western Interior Seaway and how it split North America; this also caused evolutionary splits in the dinosaur populations. In many cases, such as the Tyrannosaurs, isolation led to the emergence of eastern and western species.


Artist Jordon Walker created these great images of Appalachiosaurus montgomeriensis as part of the Georgia Southwestern Visual Arts project and did a superb job showing the juvenile A. montgomeriensis in human scale terms without suggesting the presence of humans while this animal lived, our own species was still tens of millions of years in the future. 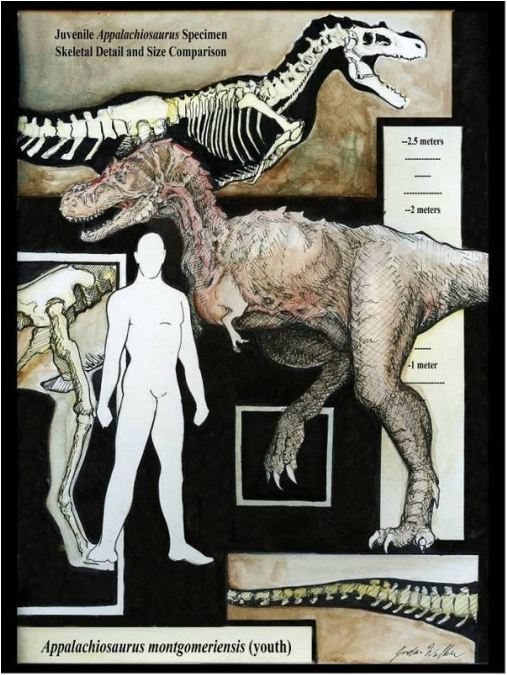 Appalachiosaurus montgomeriensis is a member of the tyrannosaur family and has been confirmed in both Georgia and Alabama. In 1982 an amazingly complete juvenile was discovered and eventually recovered in Alabama.

At first it was believed to be an Albertosaurus, but problems remained with this identification and by 2005 the specimen had been reconsidered and identified as a juvenile specimen of a new species of the tyrannosaur group and named; Appalachiosaurus montgomeriensis. The research paper over this find was headed up by Dr. Thomas Carr out of Ontario, Canada; David Schwimmer was part of the research team.

Isolated fossils recovered from Hannahatchee Creek, and other Southeastern locations, were re-assigned as additional Appalachiosaurus individuals. 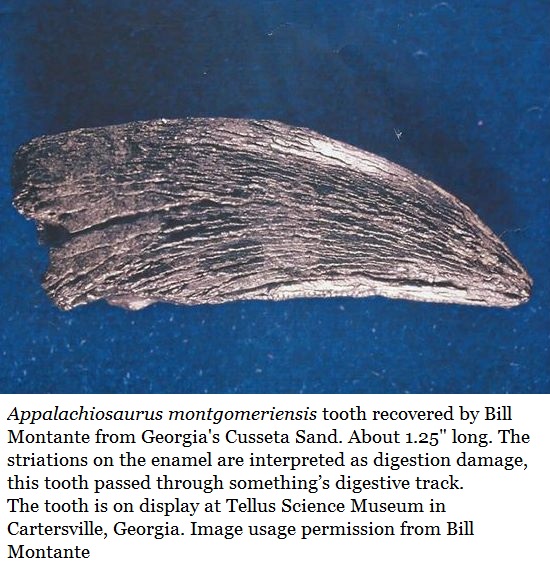 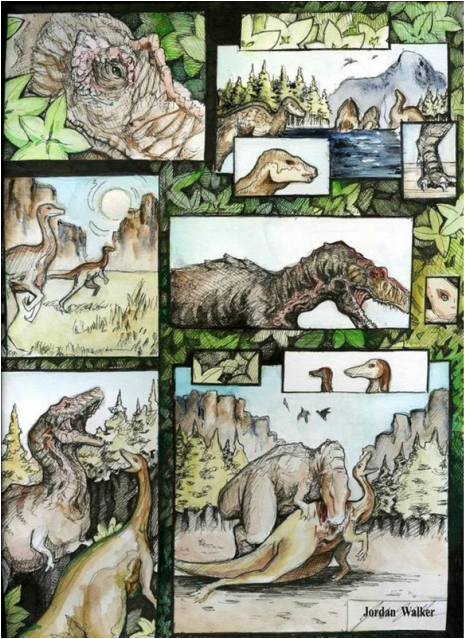 The tyrannosaurs emerged before the seaway completely divided the continent. Once it flooded the Midwest the isolation between the two landmasses led to independent evolution.

Appalachiosaurus evolved from a branch of the tyrannosaur group and is older than Tyrannosaurus rex.  Fossils for members of the tyrannosaur family are unusual in the eastern United States as conditions which favored the preservation of land animals were decided rarer than in the west.

I’m glad we weren’t around, we might have been a tasty snack. 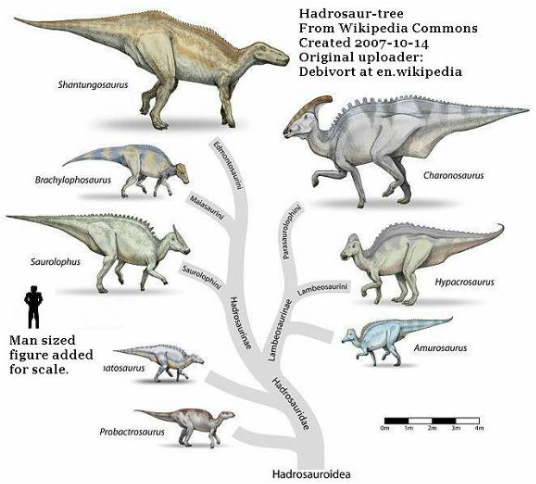 Duck Billed Dinosaurs (Hadrosaurs)
Hadrosaurs also walked in Georgia, these are the herbivore duck-billed dinosaurs. Leg and foot bones from hadrosaurs are frequently found but not enough material from any single individual has yet been recovered in Georgia to allow species identification.

Among the most common of dinosaurs, hadrosaurs were a diverse group with elephant sized species and several house sized species. They are believed to have been herding animals and were probably common in Georgia 77 million years ago.

Note;
On 12/February/2021 I posted this page on Facebook’s Georgia’s Fossils Group and Dr. David Schwimmer at Columbus State commented…
“Might also add that a young hadrosaur tibia was recently collected in the Ripley Formation near Lumpkin, GA.. This is at least 5 million years younger than the fossils discussed here. Unfortunately the collector wanted it for his personal use, so I can't formally report it and it was too fragile to cast.”

The Ripley Formation has been dated by fossil content as early to mid-Maastrichtian stage of the Cretaceous; placing it roughly between 67 to 70 million years old. That tells use that hadrosaurs walked Georgia for millions of years. 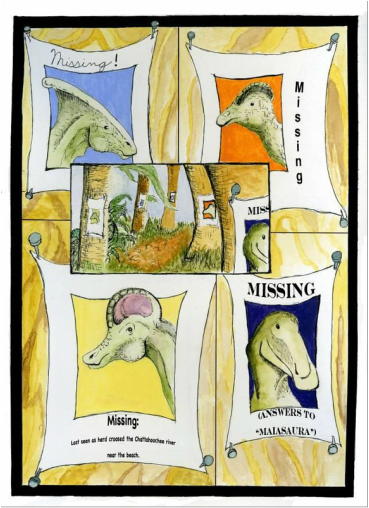 Artist Rebbeca Shields created the following interesting and imaginative images of Georgia’s hadrosaurs. Faced with the problem of not knowing which species occurred, but understanding how the fossils came to be in the marine sediments, she thought of the missing herd members and after corresponding with me she applied human emotions to the problem.

Scientifically we know that missing herd members wouldn’t have been mourned in anything like the human sense; animals know fear and predators can plan complex actions, but the emotional capabilities of animals, especially dinosaurs, is unknown at best. 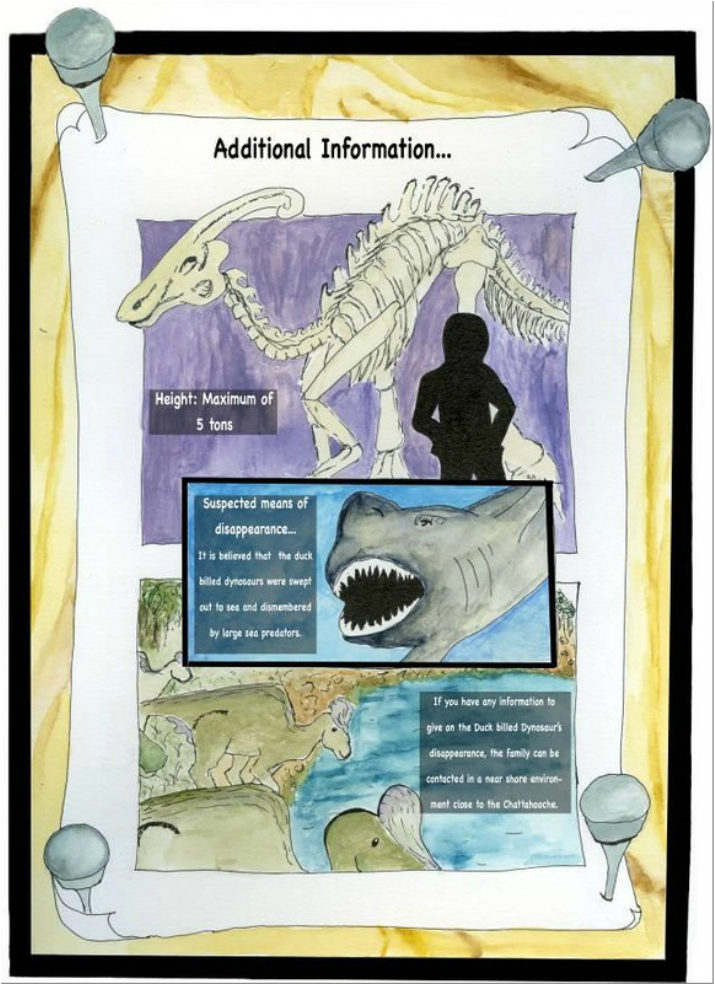 From a scientific point of view; “missing” posters would fall into the “fanciful fiction” category. However, Ms. Shields has managed tell the scientific story while creating a sense of empathy for the animals. You can almost image family members tacking up posters in the forests. 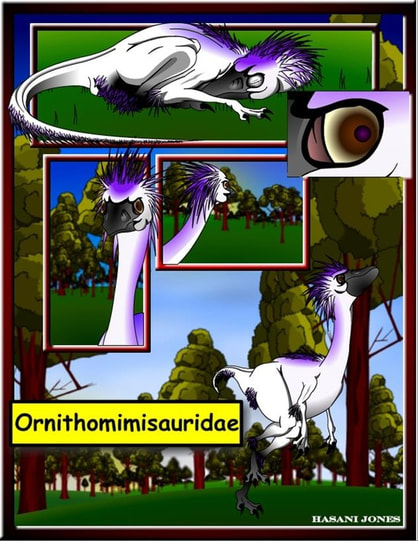 David Schwimmer’s research has produced fossils of these animals from the Chattahoochee River valley. The name Ornithomimidae means “bird-mimic lizards”. Not enough material has been found to determine family, genus or species.

The primitive ostrich dinosaurs had teeth, but those more advanced animals occurring in Georgia likely had beaks like birds. They were probably feathered. They typically had small heads with large eyes, long bodies, long necks, long hind legs and long forelimbs with highly developed claws.

These were fast, agile runners and formidable predators. Some researchers believe that these were among the fastest of all dinosaurs. There were species which grew up to thirty feet long and fifteen feet high. Several were in the eight to fifteen foot range and would have stood about seven feet high.

Artist Hasani Jones shows us an ostrich dinosaur which might have hunted Georgia. There is no modern animal possessing these capabilities so it’s difficult to imagine the threat such a large hunter would pose. Speed, agility, a dangerous beak and raking claws; you would not want to attract the attention of this predator. 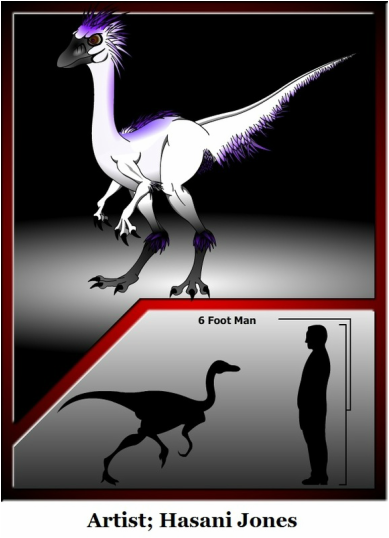 These were fast, agile runners and formidable predators. Some researchers believe that these were among the fastest of all dinosaurs. There were species which grew up to thirty feet long and fifteen feet high. Several were in the eight to fifteen foot range and would have stood about seven feet high.


Globally….
Though life was rich and diverse on Earth it would seem strange to us, mammals were present globally but they were primitive, more closely related to monotremes and marsupials than placental mammals.

This is, Protungulatum donnae, a rat sized animal and probably an insectivore.

China has produced two very interesting early mammal fossils; Agilodocodon scansorius is an arboreal animal equipped with long claws well adapted to a climbing life in the trees. Docofossor brachydactylus is a subterranean mammal with spade-like claws adapted to digging.

Both are very small, chipmunk or small in size and both lived 165 to 160 million years ago. Both were reported this year (2015) in the Journal Science.

It is very interesting to learn that such diversity existed in early mammals even as the dinosaurs ruled.


Placental mammals are very likely present at about 90 million years ago but the oldest (largely) undisputed placental mammal fossil was found in Montana about a meter above the Cretaceous-Paleocene boundary and dated to just about 300,000 years after the impact event which ended the dinosaurs.

This is, Protungulatum donnae, a rat sized animal and probably an insectivore.

In 2011 a fossil from a different member of the Protungulatum genre was described from the Hell Creek formation in the Western USA. The Hell Creek formation is indisputably Cretaceous in age, it has produced many of North America’s most famous dinosaurs. While this this find is still somewhat debated, in consensus is reached it would show that placental mammals lived alongside dinosaurs.

Reptiles, amphibians, dinosaurs and birds had all shown themselves as very adaptive in Earth’s history of life; but it would be the placental mammals which would prove most adaptive, most capable of evolving to meet new challenges.
***
Note (15/July/2020);
So after detailed observations in micropaleontology, over years, Schwimmer learned that some of the fossils originally attributed to the Blufftown Formation actually came from the overlying Cusseta Sand or the mixed bed between the two.

(See Section 7I for further details.)