​6A: Birth of the Atlantic Ocean
By Thomas Thurman
​ 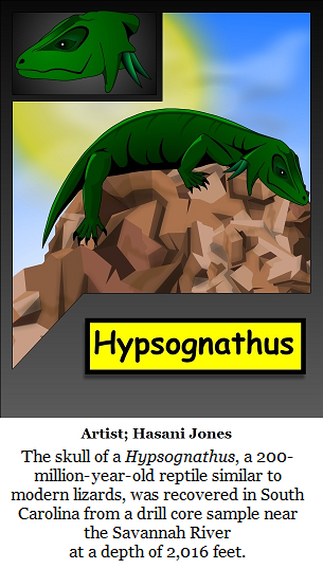 Our Hypsognathus knew only a tiny part of boundless Pangaea.

Boundless Pangaea; without ever seeing an ocean you could have walked from Australia, through Antarctica, through Africa, South America, Central America, North America, Canada, Greenland, Western Europe, Russia, China and beyond.

If we could visit Georgia during time of Hysognathus 200 million years ago we’d quickly notice that the Atlantic Ocean was missing. It simply didn’t yet exist; there was only Pangaea surrounded by a global ocean. 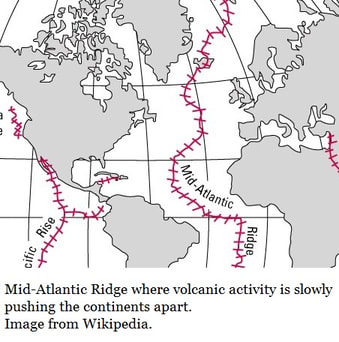 Before the Atlantic Ocean could open Pangaea had to be split.

So how do you split a continent?

We saw how 300 million years ago plate tectonics had formed Pangaea when the continents collided, buckling the terrain of Georgia’s Ridge and Valley Region.

The continents are restless. Today there is a volcanic seam along the length of the modern Atlantic Ocean floor which forms the Mid-Atlantic Ridge, the longest mountain chain in the world. It is completely submerged except for its northern-most limit in Iceland.

Several tectonic plates are involved but essentially the Mid-Atlantic Ridge is where magma from Earth’s mantle rises through the Earth’s crust to the sea floor. Deep beneath the Atlantic’s waves it erupts as lava, providing new crustal material as it slowly pushes the continental plates apart.

Today, the sea floor is spreading at about 2.5 centimeters (.98 inches) per year. 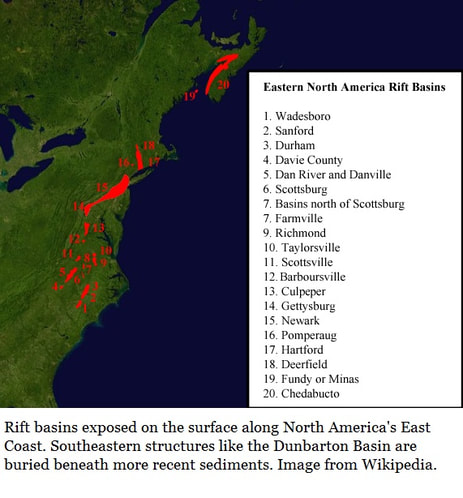 The Mid-Atlantic Ridge created the Atlantic and began the slow process of splitting Pangaea. The splitting began with a rift, a seam, where rising forces were pushing the plates apart.

The Dunbarton Basin and many other rift valleys along North America’s east coast represent early failures to split Pangaea. These are rifts that didn’t stick.

Dr. Burt Carter at Georgia Southwestern reminded me of this when he reviewed this website.

11/Dec/2014
Thomas
There’s another Africa connection.  The various rift basins in the eastern USA were failed attempts to open the Atlantic Ocean.  The basin that ultimately succeeded (where GA is concerned) was one whose walls were (very roughly, given subsequent erosion) where the continental slopes of N. America and Africa met.  That rift basin is still active as the Mid- Atlantic Ridge.  All the Atlantic oceanic crust between the original walls has been created since the Jurassic at that rift basin.  This is still one of the coolest realizations I have ever come to.
Burt

Think of that, the world’s longest mountain chain and hundreds of miles of sea floor which didn’t exist when our Hypsognathus lived.

17/Dec/2014
Thomas
Consider that Africa was attached to North America, with a volcanic island chain squeezed in between. A series of roughly parallel tension cracks began to form, as rifting began, and the cracks (at depth, not necessarily at the surface) filled with hot basaltic magma from below. These became the Triassic-Jurassic diabase dikes that we see exposed in some of the rock quarries and elsewhere in the Piedmont. One of these cracks became dominant with tremendous outpourings of basaltic lava, and became the Mid-Atlantic Ridge, forming the Atlantic Ocean basin.
Pamela

Pangaea was split, the Atlantic Ocean was born and the Earth moved closer to the world we all know and love.