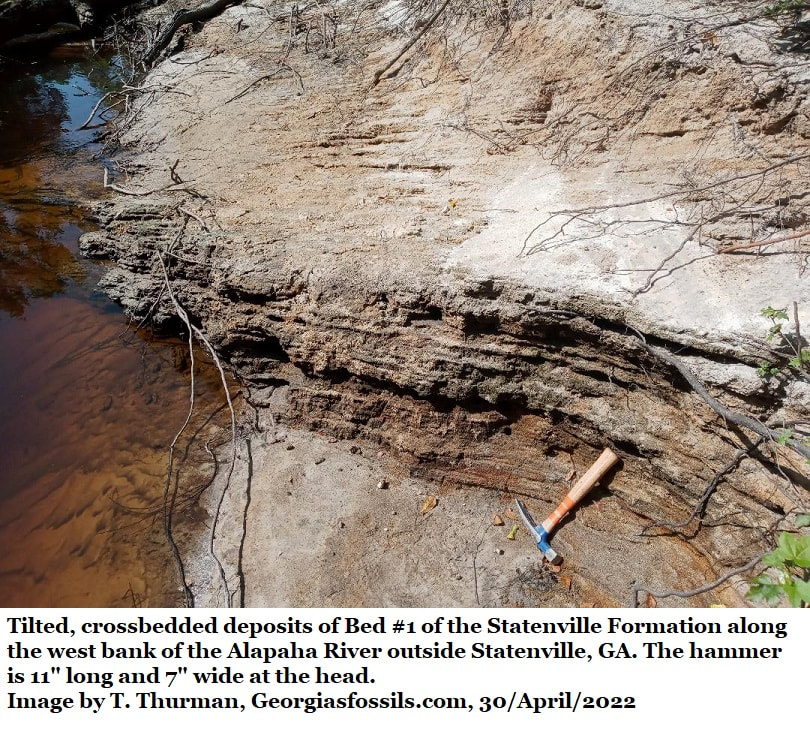 A Mystery of Terrestrial Miocene Fossils
The literature suggests that along the Alapaha River just west of Statenville, Miocene fossils are easily collected; they are not.

In Section 18A of this website we looked at the Miocene fossils Michael Voorhies collected and reported from Statenville, Georgia in 1974; 200 shark teeth, teeth from multiple terrestrial mammals, turtle, and even rhino remains. Fossils that dated to between 13 and 16 million years old. They were once housed at the University of Georgia Geology Department but have since been lost. So, there are historic and scientific reasons for revisiting, and perhaps expanding on Voorhies 1974 research.
​ 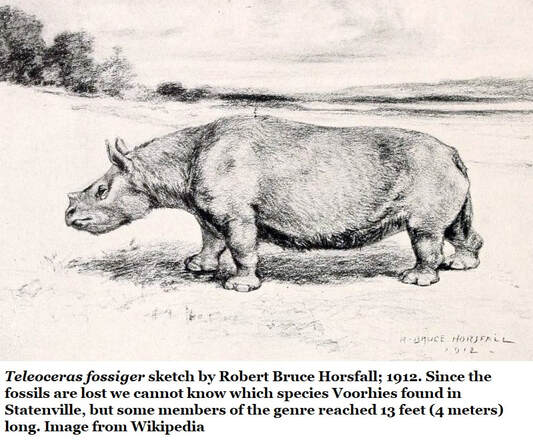 When dealing with the vast Miocene epoch, which span 23.0 to 5.3 million years ago researchers usually turn to fossil dating by NALMA; North American Land Mammal Age. This breaks large blocks of time into more manageable chucks by correlating what other species are known to have existed at any point and time. NALMA actually extends from the Cretaceous to the present. But for our purposes here, we look at its breakdown of the Miocene.
​
NALMA dating through the Miocene (MYA=Million Years Ago)
Statenville’s fossils date to NALMA’s Barstovian Age.
​ 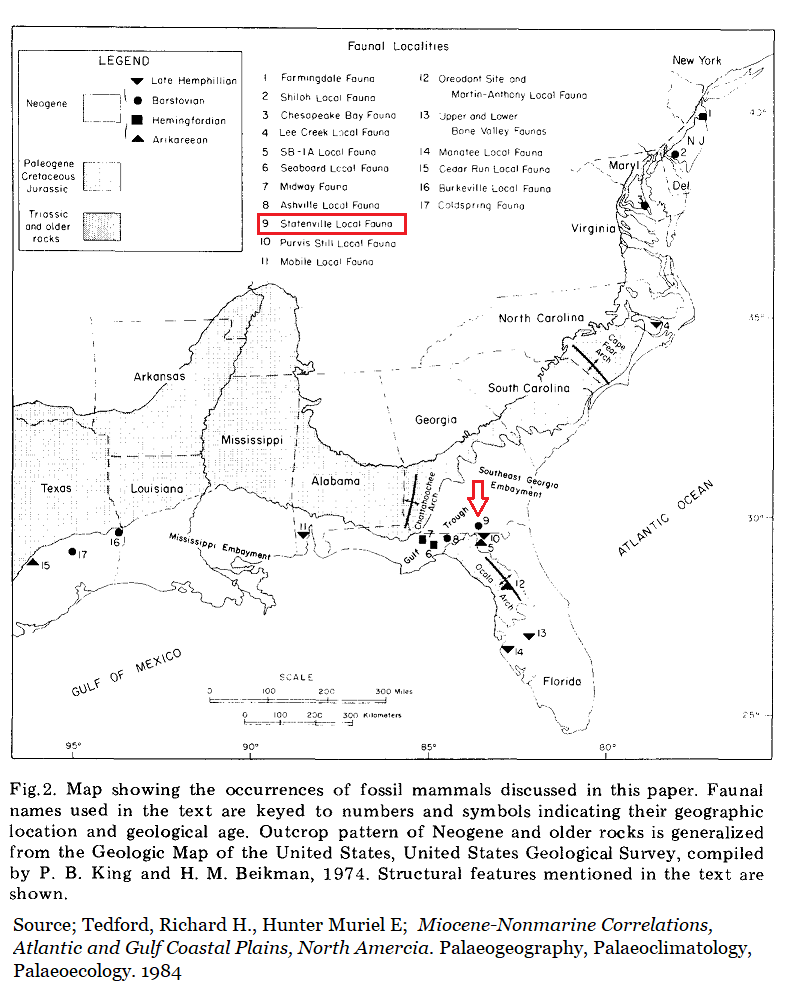 As far as the Southeast goes, only Florida has a well explored Miocene record but it tends to run in the 5 to 10 million year old range (Hemphillian Age). Georgia’s seems a bit older.
​​
Statenville is the county seat of Echols County, Georgia. It is about 18 air miles southeast of Valdosta and about 5.75 miles north of the Georgia/Florida line.

Voorhies reported “Except for the rhinoceros remains, all fossils were obtained from a small exposure about 15 yards long at the mouth of the small tributary that enters the river approximately 150 yards north (upstream) of the Georgia Highway 94 bridge at the western city limits of Statenville.”

Furthermore, Kyle Keller, the musician and amateur paleontologist, reported multiple horse teeth and petrified wood from the area. He and Hank Josey explored further and recovered additional mammal teeth, petrified wood and a coral fragment.
​
The author has a bit of field experience… The 30/April/2022 drive from Warner Robins to Statenville was 2.5 hours each way. I was onsite at 9am on a Saturday morning and spent three hours prospecting, screening, observing and referencing Voorhies report.

For all that effort, I found one single trace fossil, a burrow cast which 1966 researchers attributed to the mud shrimp Callinassa.
​ 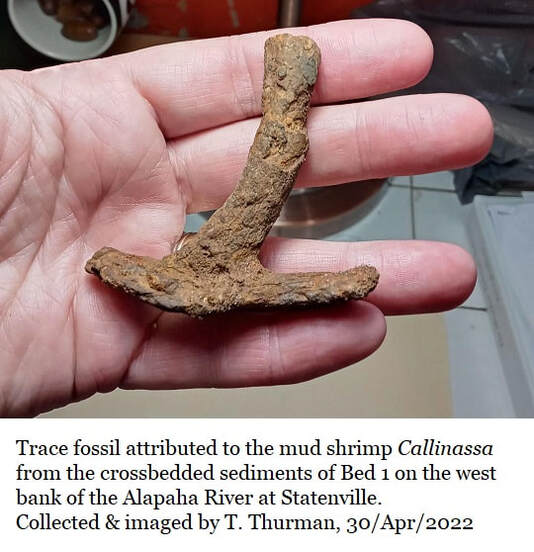 Frustrated, but not defeated, I returned home to expand my research.

Clearly, there are gaps which need to be filled in the literature on hand.

Visiting a site helps you understand it. Voorhies had good descriptions of what he observed, he was referencing and expanding on a detailed 1966 field trip report by Harold Kelly (H. K.) Brooks.

Standing amid the stratigraphy and reading the descriptions allows you to see what they saw and touch the same exposures.

It was immediately clear that Voorhies had at least one mistake in his text; or perhaps conditions had changed in the last 48 years. At any rate, there was no small tributary feeding into the Alapaha River 150 yard north of the Highway 94 bridge. Troublesome Creek feeds into it 350 yards north of the bridge. But about 230 yards north of the bridge, on the river’s east bank, the literature suggest that there’s an earthen dam.
​ 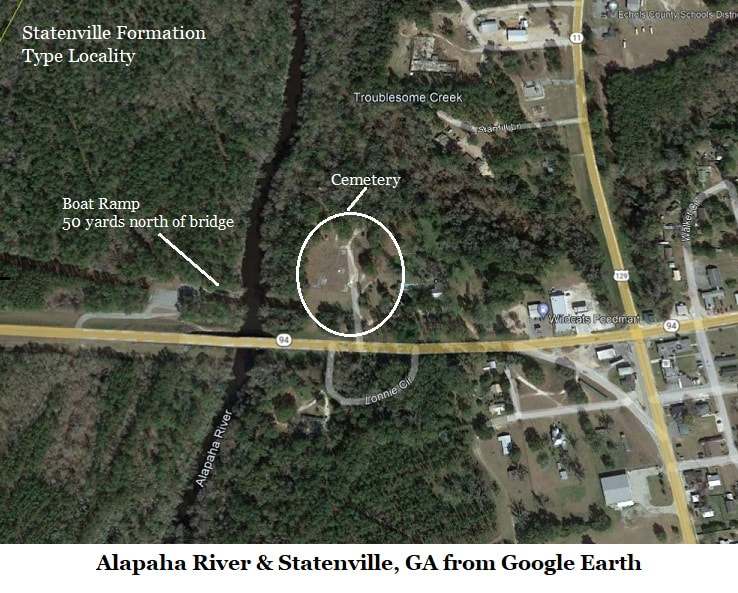 The Alapaha River is one of Georgia’s smaller rivers and was on the low side when I visited. I watched two powered jon boats launch from the boat ramp, they could maneuver comfortably but a boat much larger would have to move very carefully. The current was quick, but the water was smooth and quiet.
​
Brooks (1966)
“Outcrops to be studied at this stop are located on the east bank of the Alapaha River and in a small tributary creek at an earthen dam north of the cemetery on the property of Mr. Dick Davis.” Then, on the next page. “Almost the entire section is fossiliferous, containing both vertebrate and invertebrate remains. (Bed 6)”

“During periods of minimum flow on the Alapaha, commonly late October to mid-November, one can stand in the channel on hard thin-bedded limestone layers which dip 10° to 12° southeast. They are, however, part of a sequence of large crossbeds which are truncated by unconsolidated Pleistocene (?) quartz sand, all of which are well exposed in the east bank of the river directly upstream of the GA 94 bridge.” 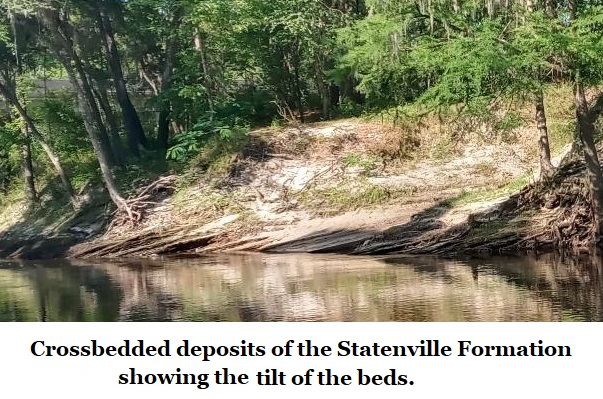 When the author visited on 30/April/2022, two vertical feet of the angled, crossbedded sediments were above the river, so the river levels were low, but they get lower.

Again, Voorhies reported in 1974 that all the fossils he collected except the rhino material came from “…a small exposure about 15 yards long at the mouth of the small tributary that enters the river approximately 150 yards north of the Georgia Highway 94…”

Bed 2
“All fossils in the Statenville local fauna except from the rhinocerous, were collected from a phosphorite pebble lens at the base of unit number 2 (Bed 2).

Bed 6
“A layer of fine gray sand with a few with a few phosphorite pebbles at the base (Brooks Bed 6) overlies the preceding strata, possibly disconformably although no evidence of profound erosion was observed. The rhinoceros bones were collected for near the top of this unit which measures about 6 feet in thickness.”

Voorhies Continues
Preservation of the Fossils
“The collection exists almost entirely of isolated teeth of mammals and fish. Except for the associated rhinoceros bones, the fossils all show signs of transportation – abrasion and breakage – although very few are badly rounded.”

“The rhinoceros bones were collected in fine grained sediment and show no evidence of transportation.”

“The color of the teeth range from black and gray through tans and browns, much like the range in colors in the phosphate pebbles associated with them. Because the color changes do not appear to correlate with either taxonomy or degree of abrasion and because several colors often occur within a single fossil, color does not appear to provide a useful criterion for distinguishing fossils of different chronological or environmental provinces.”
​
“Although some of the fossils may be reworked there is no biostratigraphic evidence of heterochronity and reworking need not be invoked to account for the presence of both marine and terrestrial fossils in the same bed, particularly in such deltaic/estuarine sediments as those in Statenville.”

“Preservation of several complete and unabraided bones of a single rhinoceros in the fine- grained sandstone at the top of the Statenville exposure suggest a different mode of origin from that of the principal fossil concentration in the phosphorite pebble zone. Although the rhinocerous bones were not articulated they were not widely scattered indicating that no significant transportation had occurred after disarticulation. Perhaps the remains represented a bloated carcass that floated down from the adjacent mainland and then sank in relatively quiet water where it was buried by fine sand and silt before much scattering occurred.”
​
“A sample of sediment enclosing the rhinoceros was submitted to Dr. E. A. Stanley for micro-faunal analysis. Dr. Stanley reports (oral communication) that no calcareous microfossils or pollen could be found in the sample but that hystricosphaerids are present. Hystricosphaerids, so far as is known (1966), are restricted to strata deposited in marine or brackish waters. (Hystricosphaerids have since been reassigned.)

Invertebrates
Voorhies 1974
Mega-invertebrate fossils appear to be rare in the cross-bedded clastics at Statenville. Occasional obscure molds and some barnacle plates were observed. Burrows of the Ophimorpha type are fairly common in the sands below the principal bone-bearing horizon. These are regarded as indicators of litoral and shallow neritic marine environment. In the fossiliferous phosphoritic pebble horizon, sinuous, ramifying burrows about one inch in diameter and up to a yard long were observed to penetrate the sediment in a more-or-less horizontal orientation. They resemble the burrows of the shrimp Upogebia affinis investigated by Frey and Howard (1969) in tidal stream deposits on Sapelo Island, Georgia. These burrows lack the pelletoid wall structure typical of Ophiomorpha.
​
Tredford, Hunter 1984
Marine & Nonmarine Vertebrates
In the wake of Voorhies 1974 Echols County Paper, Richard Tredford and Muriel Hunter published a 1984 review of Miocene vertebrates of the southeastern Coastal Plain. They were cross referencing coastal land vertebrates recovered from marine sediments with mollusks, foraminifera, and diatoms with planktonic foraminiferal zones in an effort to increase dating accuracy. They reviewed and discussed the Statenville finds. (*)

“Echols County, Georgia (Statenville Local Fauna; Voorhies, 1974) represent an early phase of the late Barstovian on the bases of their contained horses species of "Merychippus", Calippus and Cormohipparion which compare most closely with forms from the lower part of the Valentine Formation of Nebraska (early late Barstovian). The terrestrial vertebrate remains are associated with estuarine sharks and rays and occur at 30-50 m above sea level. This assemblage apparently represents a fauna coeval with a depositional phase within the medial Miocene transgression.”

While Tredford and Hunter agree with Voorhies’ Merychippus identification they expand the list to three different genre of horse in the Statenville deposits; Merychippus, Calippus and Cormohipparion.
​
Huddlestun 1988
The Statenville Formation is very sparsely fossiliferous. Molds and casts of mollusks occur locally in moderate frequency in the dolomitic beds. Fossils with calcitic shells, such as scallops, oysters, and barnacles are very rare. Voorhies (1974b) reported a meager assemblage of vertebrate fossils from the type locality of the formation. Vertebrate fossil debris, such as small fish teeth and bones, is not rare in the phosphatic beds of the formation, and the trace fossil Ophiomorpha nodosa is locally common in sand beds on both the Alapaha and Suwannee Rivers. Most beds and many sections of the Statenville Formation, however, are barren of visible fossils.
​
All that said...
There's more going on.
Kyler Keller, the intrepid musician and fossil hunter, kept reporting to Hank Josey and I that there was more going on in Statenville that was reported in the literature. He was kayaking and walking the water, screening for samples and recovering horse teeth, shark teeth, and petrified wood, and from the river during low levels.

In October 2016 Hank Josey loaded his kayak and went down to join Kyle for a day on the water. They created this photo record.
​ 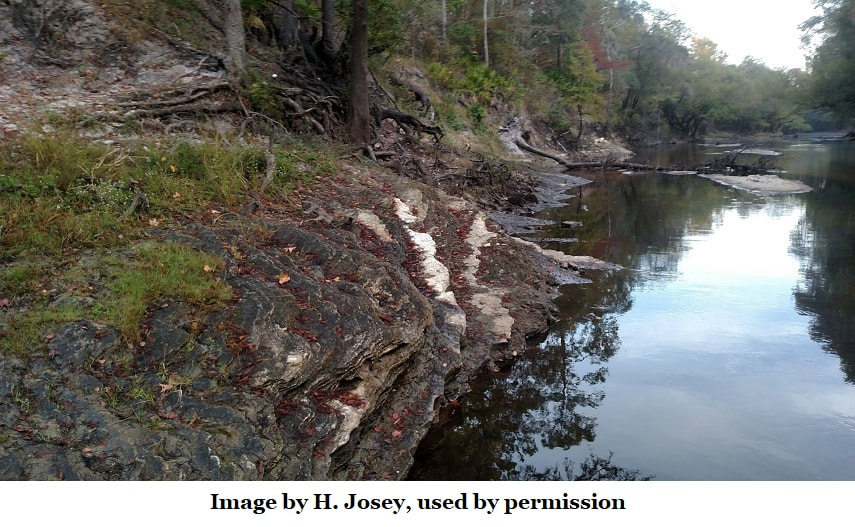 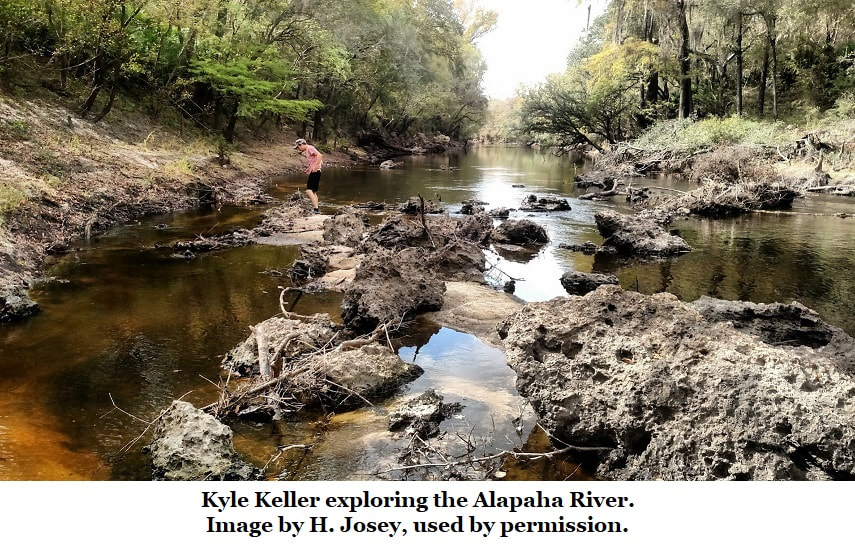 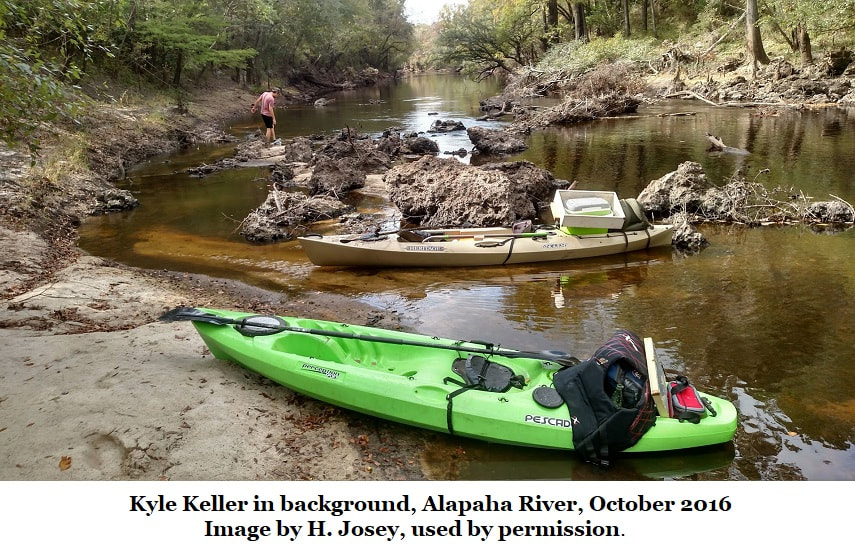 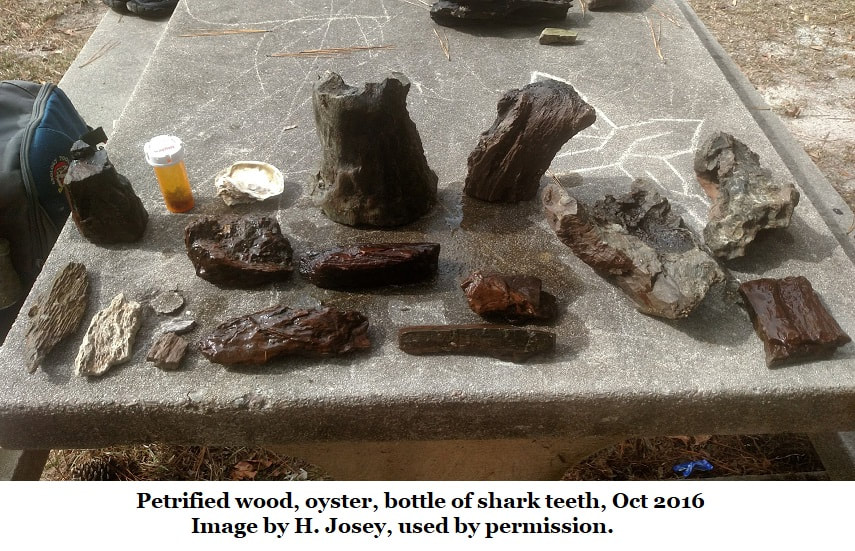 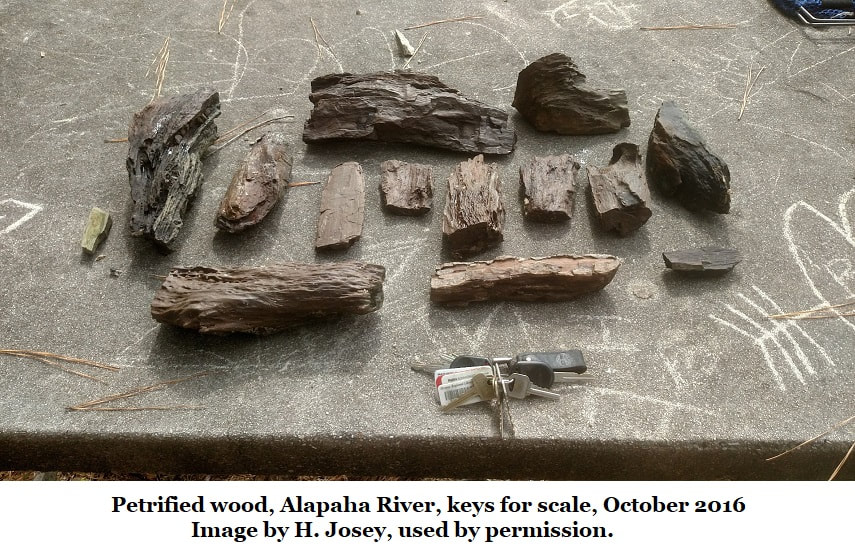 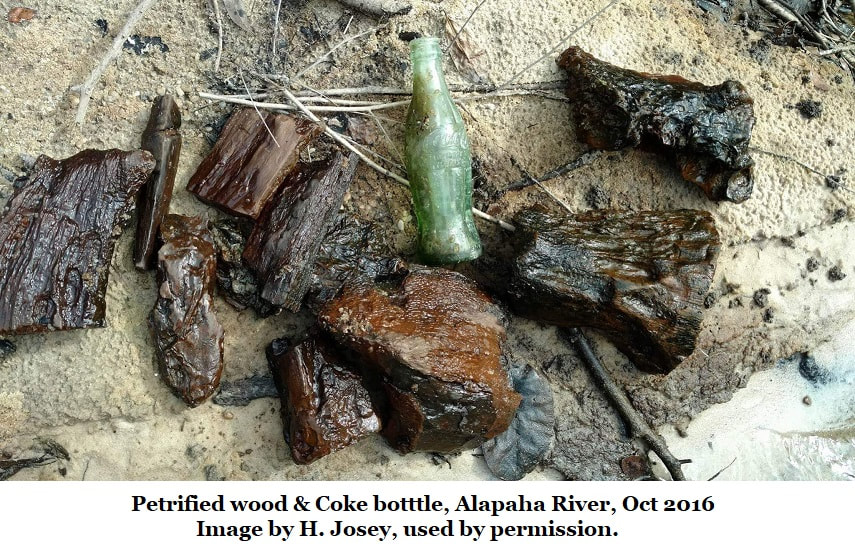 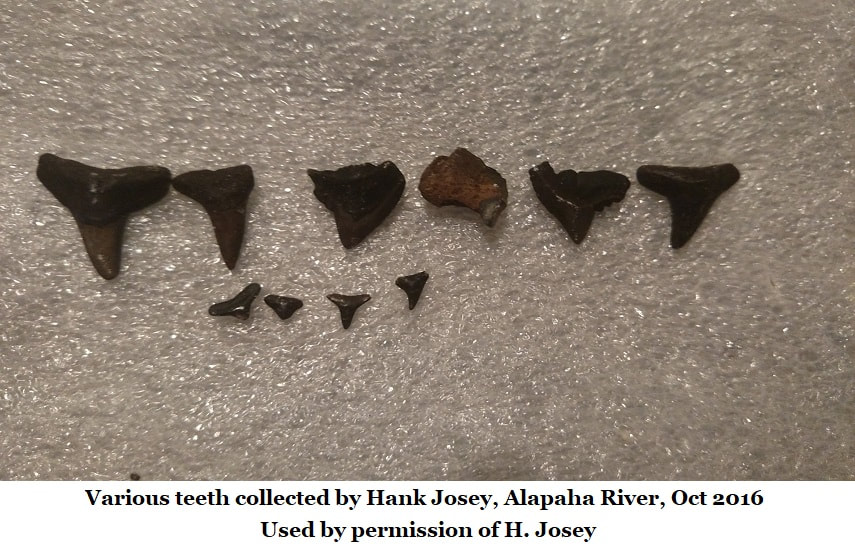 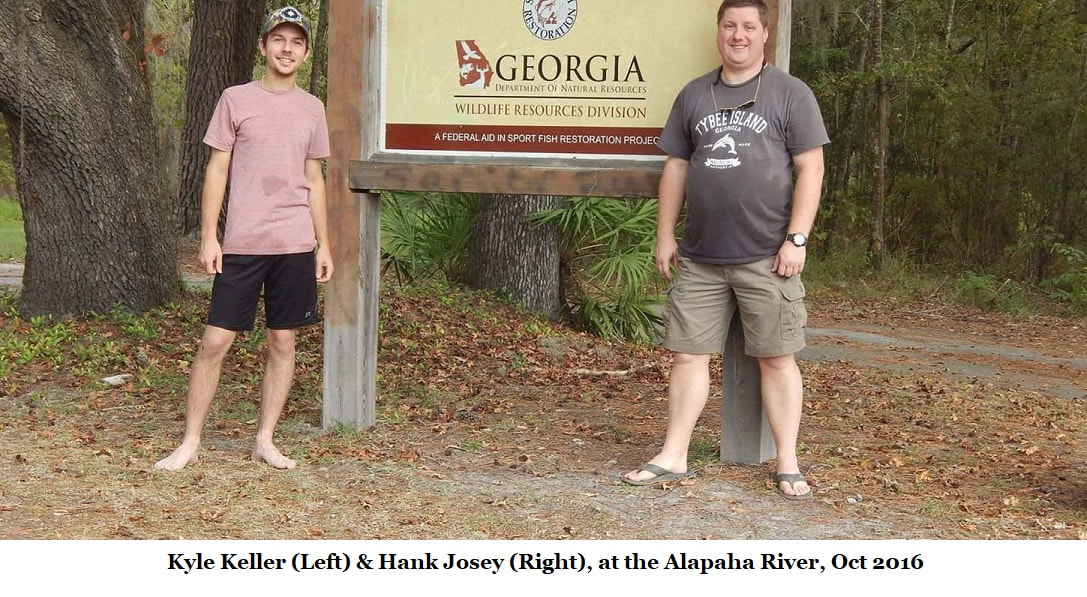 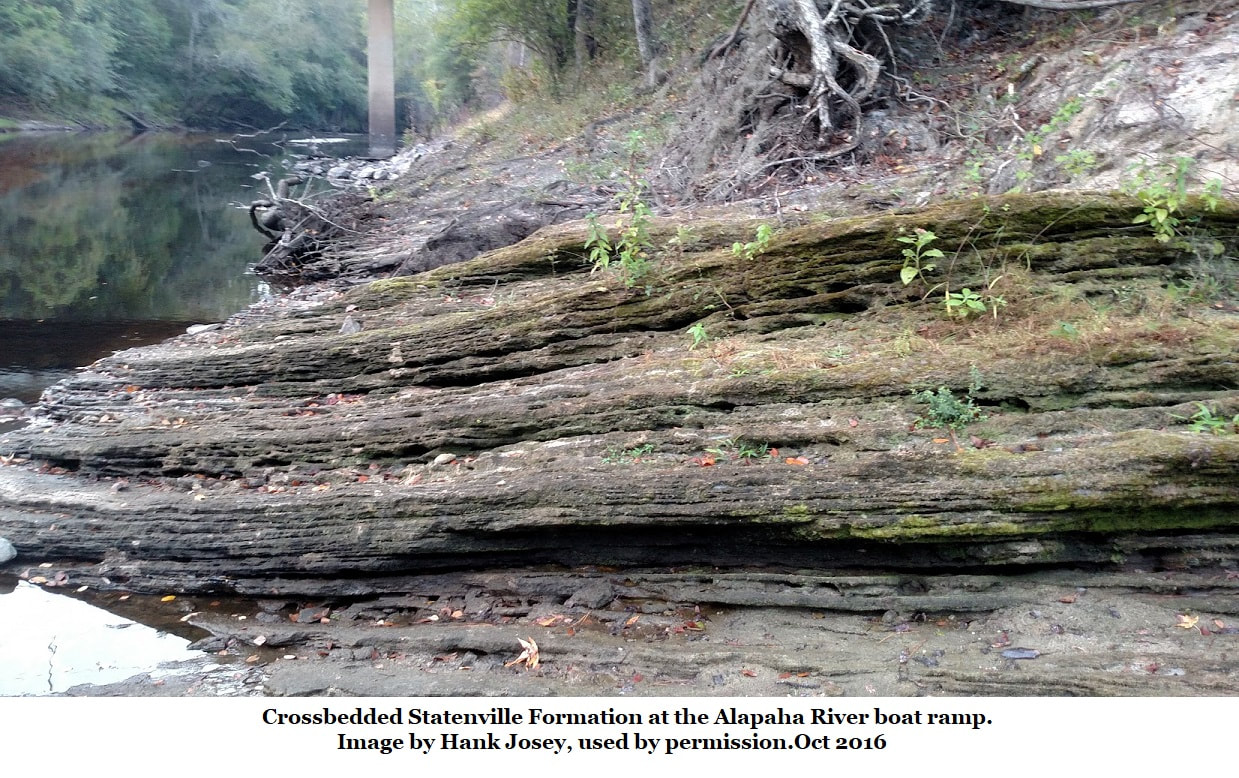 Huddlestun, Paul, F.; A Revision of the Lithostratigraphic Units of the Coastal Plain of Georgia. The Miocene Through Holocene, Bulletin 104, Georgia Geologic Survey, 1988