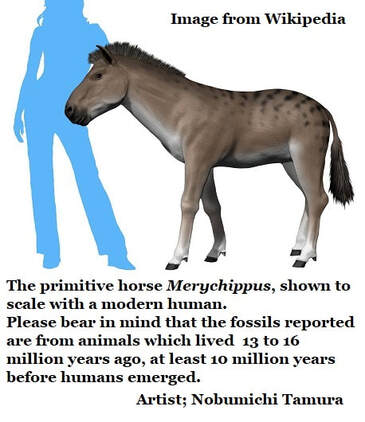 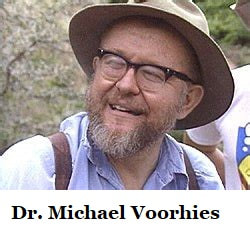 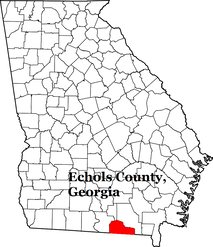 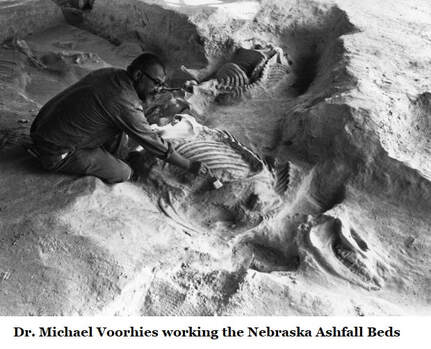 Dr. Michael Voorhies was an active and superb vertebrate paleontologist with University of Georgia; one of their last, and one of the very few UGA researchers who stands prominently in Georgia’s paleontology literature. He is retired now and living in Nebraska where he has spent the end of his career helping to reveal and establish the Nebraska Ash Fall beds.
​
​In ’74 Voorhies observed that the Echols County sediments appeared as a paleo river delta environment; he noted the presence of “two fairly advanced” species of three-toed horses of the genus Merychippus as well as fossils of the small rhino genus Teleceras. He dated these to the Barstovian Stage of the North American Land Mammal Age (NALMA); 16.3 to 13.6 million years ago (mya).
​ 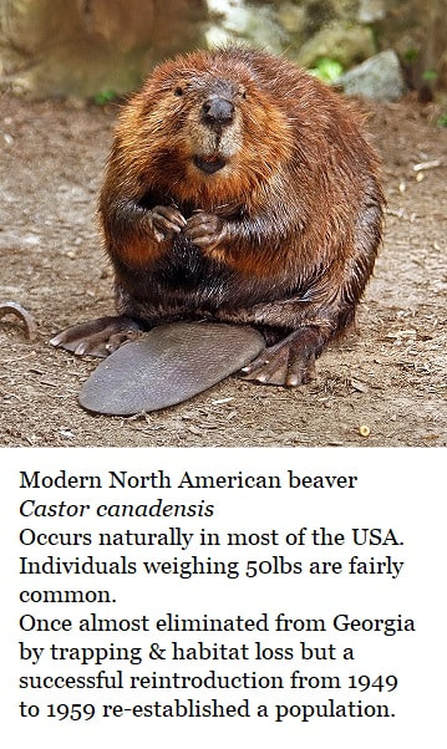 Voorhies tentatively identified the beaver to the genus Monosaulax and in 1974 this was the only report of that fossil from Eastern North America.

​Voorhies reported these finds in Southeastern Geology; Hank Josey managed to track down a copy of the paper and shared it with me.
​Thanks Hank!!
​
The 1974 paper’s introduction begins with the statement;
“Knowledge of the North American land vertebrate fauna east of the Mississippi River during the Tertiary is based almost wholly on fossils collected in Florida.” Voorhies’ work here and in other Georgia Coastal Plain counties did a great deal to change this perspective.
​
​Discovery
The fossils were collected in a riverbank outcrop during the lowest river levels of October & November. About 30 feet of phosphorite-bearing sediments were exposed at the outcrop.  Some of the sediments showed evidence of profound erosion. All the fossils except for the rhinoceros material were collected from a phosphorite pebble lens, and showed varying degrees of natural transportation and/or abrasion damage. The rhinoceros material was collected separately at a nearby location in a layer of fine gray sand, they showed no evidence of transportation.

Oddly, except for the rhino material, the collected specimens consisted almost entirely of isolated teeth of mammals and fish. A reminder that teeth are the hardest substance the body creates.
​ 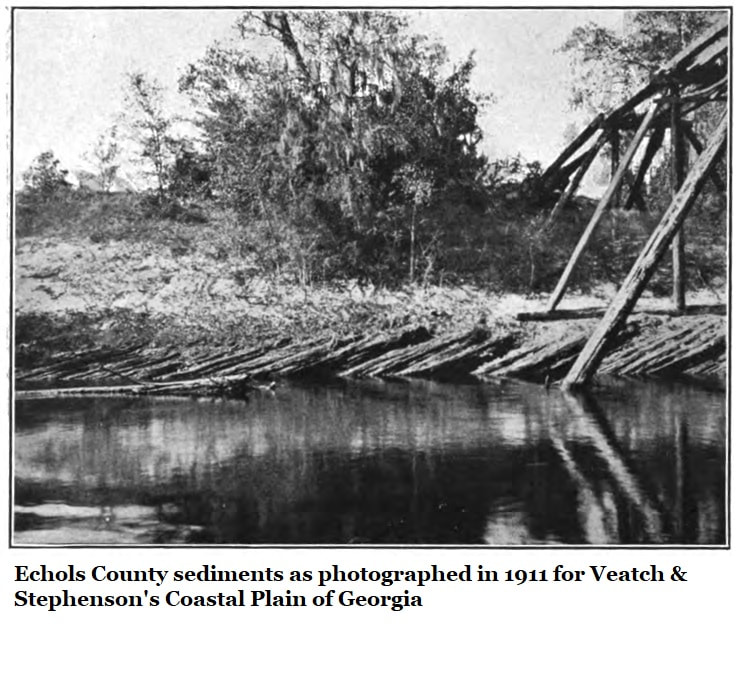 The teeth were reported as ranging in color from black and grey through tans and browns, much like the phosphorite pebbles, without any obvious pattern or attributable reason for the differences in coloration. Separate teeth from the same species may be different colors. Even a single tooth might have color variations. Abrasion and breakage, due to transportation,  was evident in the teeth though few were badly rounded.
Although the rhino bones weren’t articulated they weren’t widely scattered. Voorhies submitted a sample of the sediments holding the rhino to Dr. E.A. Stanley for analysis and the results reported the presence of micro-fossils restricted to marine or brackish waters.

Voorhies speculated; “Perhaps the remains represent a bloated carcass that floated down from the adjacent mainland and then sank in relatively quiet waters where it was buried by fine sand and silt before much scattering occurred.”

One must remember that this rhino and all these animals lived at least 10 million years before even the oldest stone tools or dugout canoes. The world got along just fine without tool-using hominids for an awful long time.
​
The fossils

Voorhies observes that the shark fauna is very similar to a Pliocene site in Manatee County, Florida excavated by Webb & Tessman in 1968. He also observed that though skate and ray teeth were present, they were surprisingly rare. He collected one rostrum tooth of a large (Pristis) sawfish. He recovered about a dozen ray teeth all of which he attributed to the spotted eagle ray (Aetobatis).

Shelly fossils were rare, especially the type fed on by most rays. Voorhies suspected that heavy sedimentation led to murky waters and poor living conditions for the shelly prey of many rays. But a good population of predatory sharks are still present.
​ 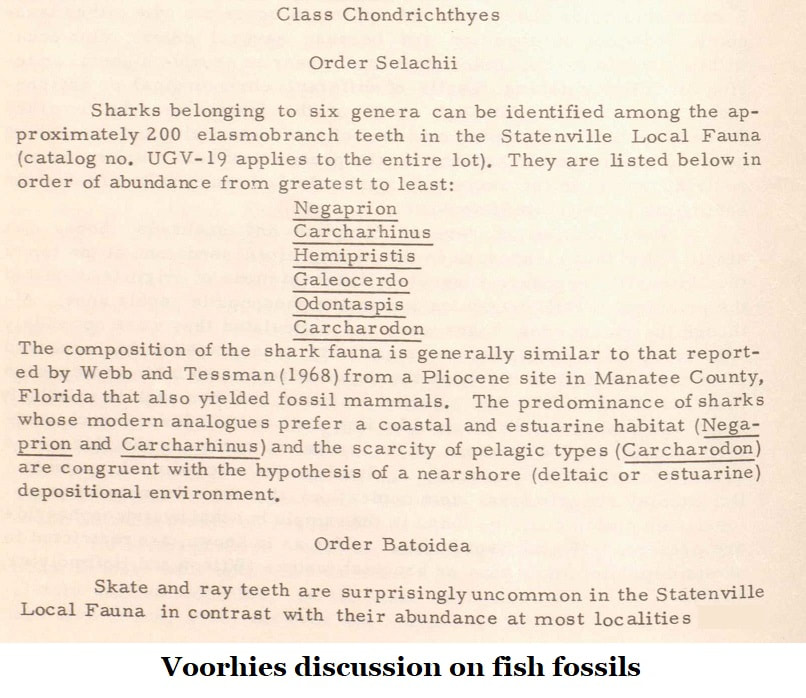 Reptile
To quote the paper.
“Water rolled pieces of turtle carapace were the only reptilian fragments recovered.”

Voorhies discovered an isolated lower molar from a small beaver which he identified to the genus Monosaulax; the first report of that genus from the Tertiary’s Eastern North America. It was furthermore the only known pre-Pleistocene castorid east the Mississippi River. In 1974 the closest reported Miocene beaver occurred in eastern Texas some 800 miles away and had been reported by Quinn in 1955.​ 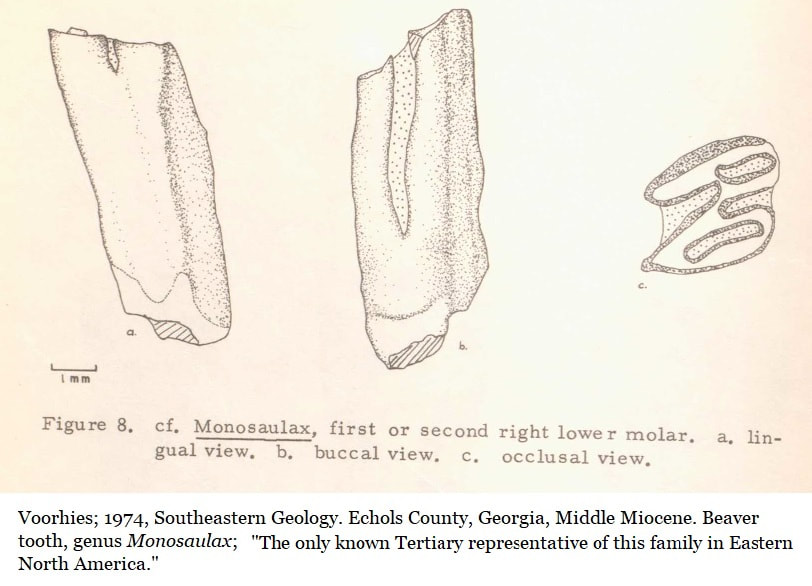 ​Carnivore
A single toe bone (phalanx) and tooth fragments were recovered which Voorhies attributed to a small canid (dog family), but the material was too incomplete for further diagnosis

Siren (manatee)
Several rib sections clearly attributable to sea cows was also recovered but could not be identified beyond the order Sirenia.
​Order Perissodactyla
Perissodactyla are odd toed ungulates.
(Wikipedia describes ungulates)
Ungulates are any members of a diverse group of primarily large mammals that includes odd-toed ungulates such as horses and rhinoceroses, and even-toed ungulates such as cattle, pigs, giraffes, camels, deer, and hippopotami. Most terrestrial ungulates use the tips of their toes, usually hoofed, to sustain their whole body weight while moving.

Family Equidae (horse-family)
Horse teeth were the most abundant terrestrial mammal remains collected by Voorhies and allowed the sediments to be dated confidently by fossil content. Two distinct species of horses are present and both readily fall within the confines of the genus Merychippus

Wikipedia: Merychippus is an extinct proto-horse of the family Equidae that was endemic to North America during the Miocene from 20.43—10.3 mya living for approximately 10.13 million years.

To quote Voorhies in 1974; “Within this exceedingly complex group of species is a bewildering amount of morphological diversity… Without more complete material it would be unwise to allocate either of the Georgia horses to one of the dozens described Merychippus species. ”
​ 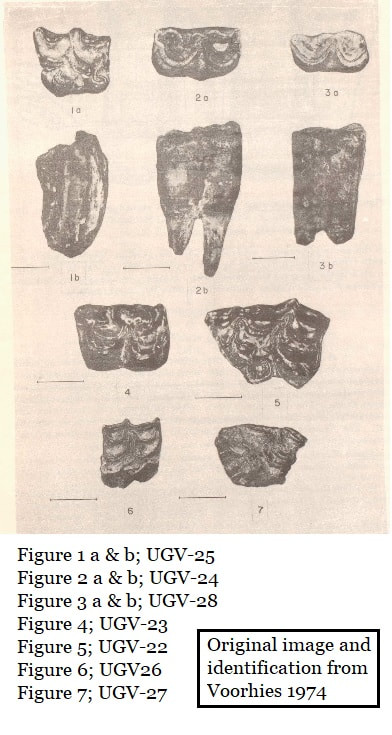 The author of this webpage has not explored the recent activity or clarification of horse evolution, genres and/or species. The scope of this website is exploring Georgia’s paleontology, and as Georgia isn’t a major source for transitional horse fossils delving into the complex natural history of horses falls beyond that scope.

In 1974 Voorhies reported;
“The great majority described Merychippus are Barstovian in age although primitive species are known from the Hemingfordian (20.6 to 16.3 mya) and at least one lineage persisted into the Clarendonian (13.6 to 10.3 mya). Morris F. Skinner has recently solved one of the more vexing problems regarding the genus by demonstrating that the genotypic of the species, M. insignis, is Barstovain (16.3 to 13.6 mya).”

Species A
The larger of the Echols County horse species is represented by two upper and two lower cheek teeth; they are identified as UGV-22, UGV-23, UGV-24 & UGV-25.
UGV-22 is an upper premolar, well worn, from fully mature adult.
UGV-23 is a lower premolar showing moderate wear.
UGV-24 is a lower molar (smaller than a premolar) and shows an advanced state of wear.
UGV-25 is from a young adult animal; an upper premolar showing early stages of wear.

Species B
The second horse species was considerably smaller and represented by one upper and two lower teeth designated as UGV-26, UGV-27, & UGV-28. There are morphological differences between the large & small species as well.
UGV-26 is an upper right molar showing a mature stage of wear.
UGV-27 is a badly abraded right premolar probably at an early stage of wear but abrasion damage is too extensive to comment further.
UGV-28 is a right molar and is little worn.

Voorhies did note that Florida teeth reported by Olsen in 1963 appeared similar in size to the larger of the Echols County teeth, but the Florida tooth appeared to have a more complex enamel pattern. 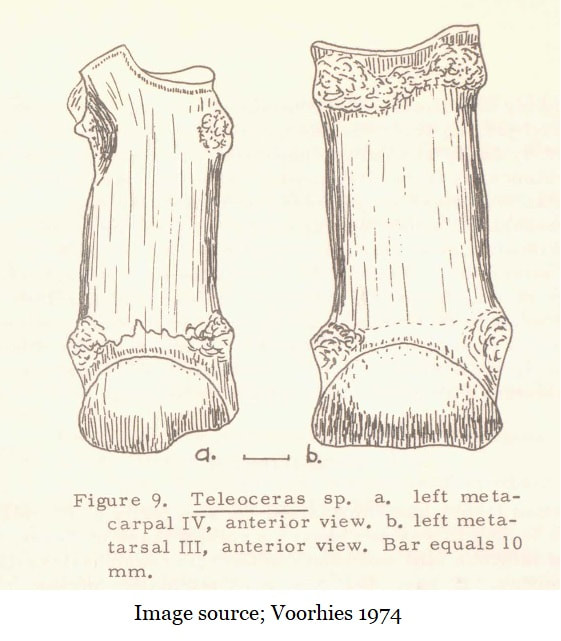 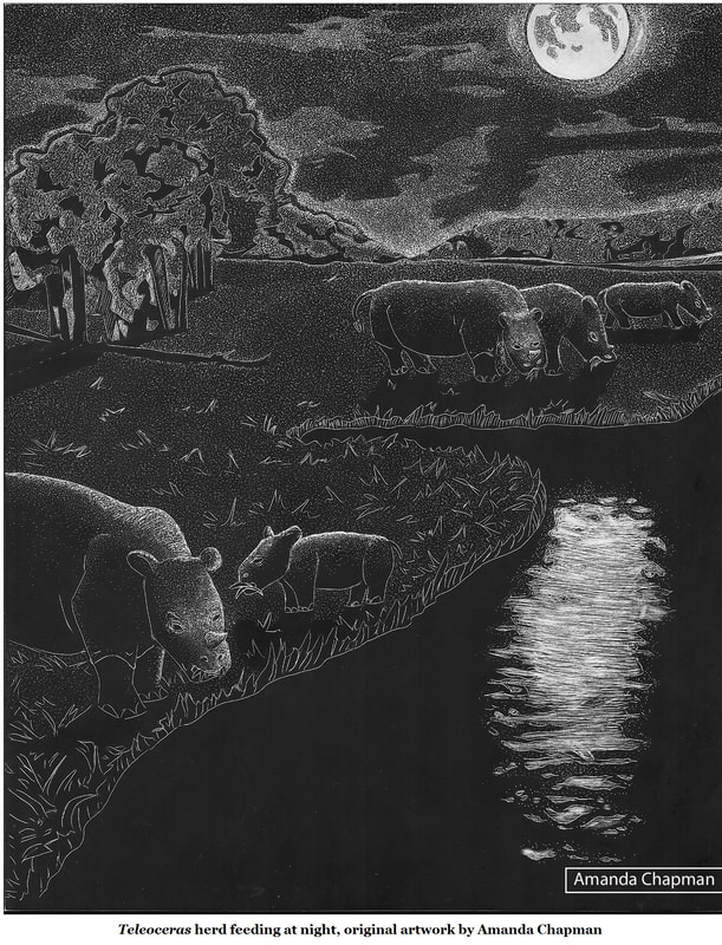 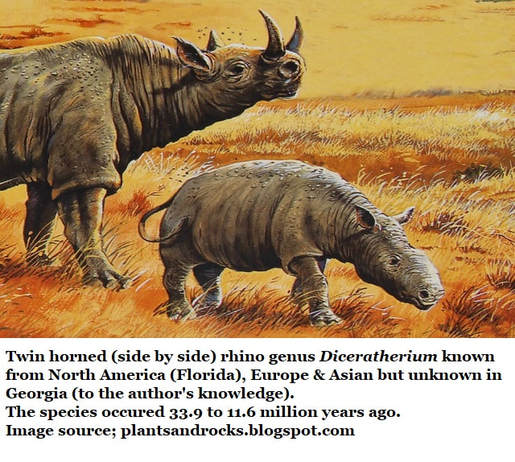 ​The metapodials (long bones of the feet) are short and stout, no rhinoceros genus except Teleoceras has such stubby metapodials. Other rhino genera from Florida; Aphelops, Diceratherium & Floridaceras.

As of  1974 the best population sample yet described was the Mixson Bone Bed, described by Leidy & Lucas in 18596 and Simpson in 1930,  in Alachua County, Florida. Teleoceras proterus, from that locality, appears to have considerably larger legs and feet than the Georgia specimen reported here. This observation is based on the descriptions, illustrations & measurements given by Leidy & Lucas.

The Echols County rhino seems smaller than the referred specimens of Teleoceras fossiger (Dated at 13.6 to 10.3 mya) reported from the North American Great Plains by Gregory in 1942.
Without a skull for Echols County animal no species-specific identification should be attempted. If more material becomes available, and the site has the attention of a modern researcher, perhaps more can be said of the rhino.
​ 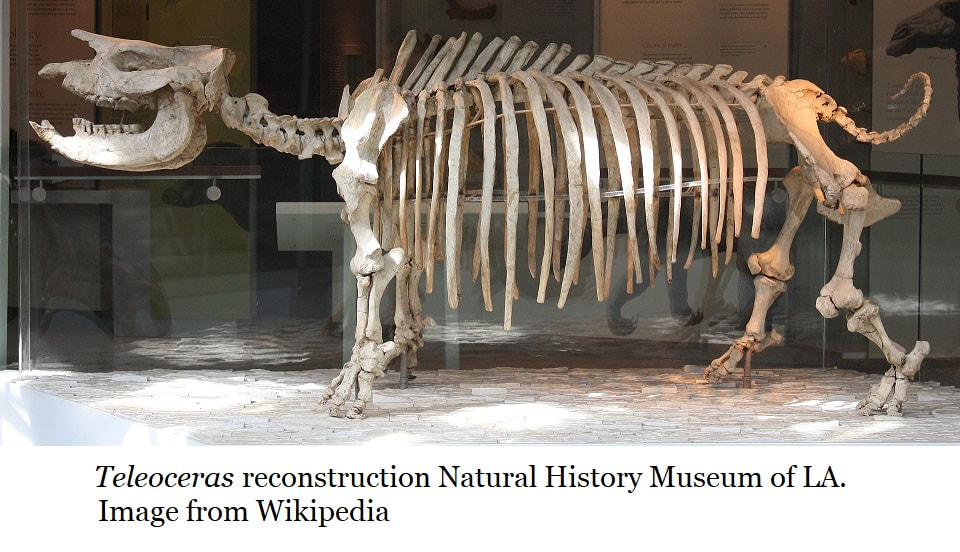