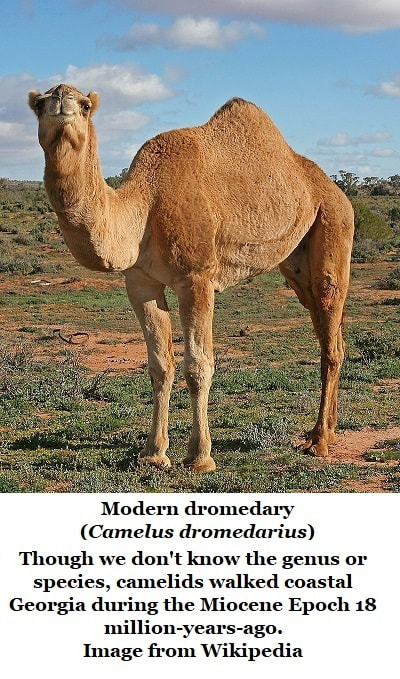 The 1989 research team collected over 500 kilograms (1100 pounds) of sediments from the 8-meter thick (26.25 feet) thick Mark’s Head Formation at Porter’s Landing and washed them through a series of nested screens. (1) They described the fossil bed as interlayered sand, clay, and clay rich sand.
​ 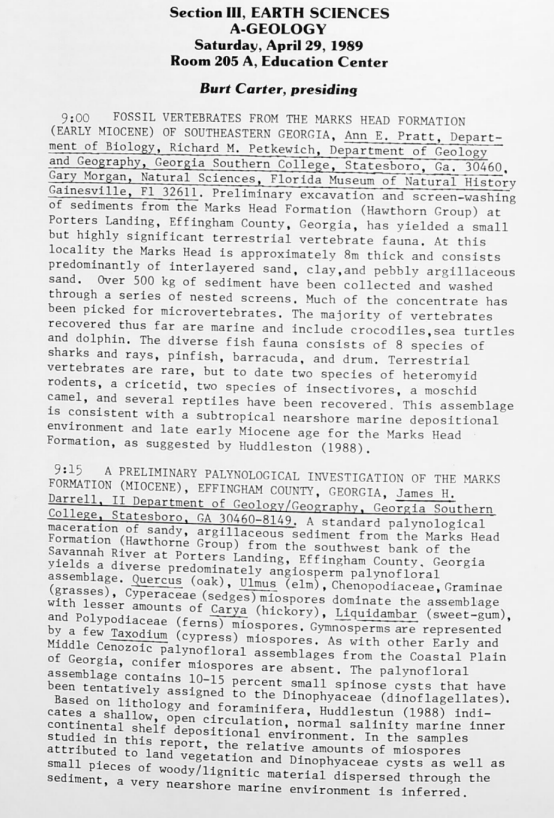 Sadly Porters Landing is now private property and is no longer accessible except via the Savannah River, and even then the trip is arduous. Nevertheless, Hank Josey made that trip upriver and filed a 30/May/2022 report on this website, See Section 18C: The Marks Head Formation. (2)

Hank did a superb job of describing the formation and we won’t repeat his work here, he mentions the crocodile & sea turtle fossils Hubiak reported. The foundation of his report was the 1999 paper by Leann Hubiak (3) which discussed the ample fish fossils Pratt & Petkewich’s fieldwork recovered in 1989. Hubiak fulfilled the requirements of her master’s degree with this paper. 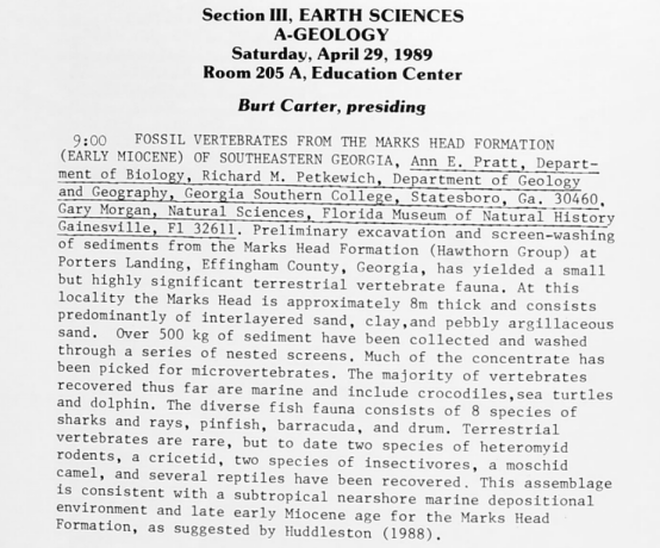 In his report Hank added his own findings from Porters Landings as well as contemporary work done by respected, Coastal Georgia amateur Chet Kirby. They were both advised by our collective friend Dr. Paul Huddlestun. Mr. Paul stood as a the lead researcher of Coastal Plain deposits for the Georgia Geologic Survey. Hank’s report is an excellent read.

By why the gap between the 1989 collection of material and the 1999 publication? It’s not unusual for universities to collect and hold a fairly large sample of matrix or fossils for later educational research. It’s an opportunity for promising students, like Hubiak, to publish. But typically the professors will publish a preliminary paper on the material to establish it.

​I cannot see that this is the case for Porter’s landing. Despite the author’s best efforts no further published work could be found. Hubiak covered the fish in excellent detail, but I’ve seen nothing more on the terrestrial vertebrates, reptiles and marine mammals. I’m told that Ann Pratt moved to South Florida and left paleontology decades ago. Sadly, Dr. Richard Petkewich, a renowned researcher into the natural history of whales, passed away some decades ago. Requests for further information from the Paleontology Curator at Georgia Southern Museum have thus-far gone unanswered. If news is heard this page will be updated.

So all we have to go on is the original 1989 account which was not a published paper but an oral report at the April 1989 meeting of the Georgia Academy of Sciences. It is preserved in a half page paragraph from the Georgia Journal of Science.
To quote the narrative… “The majority of the vertebrates recovered thus far are marine and include crocodiles, sea turtles and dolphin.”
​ 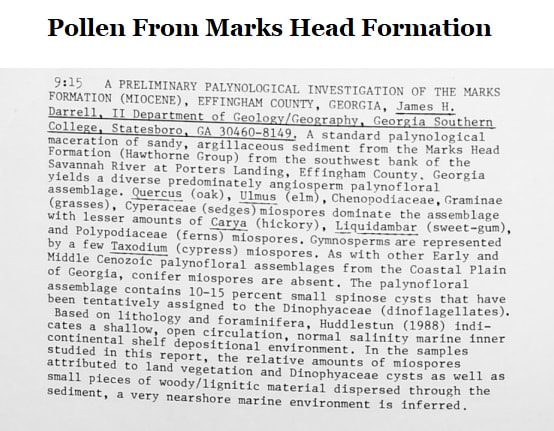 Miocene Pollen
The other half of that same page is a report on Miocene pollen.

On that same April morning in 1989, immediately after the report on Mark’s Head vertebrates, James H. Darrell, (4) also from Georgia Southern, reported on Mark’s Head pollen. A report on pollen tells us a great deal about the local environment which these beds were laid down. Dinoflagellates made up roughly 10% of the fine-grained specimens. “Small pieces of woody/lignitic material was dispersed through the sediments, a very nearshore marine environment is inferred.”

It was an environment not so different from ours.

It’s been 33 years since these fossils were originally collected. I want to thank the Paleontology Association of Georgia (PAG) for posting this report on their Resource webpage. (5) Otherwise it might have been lost to history.