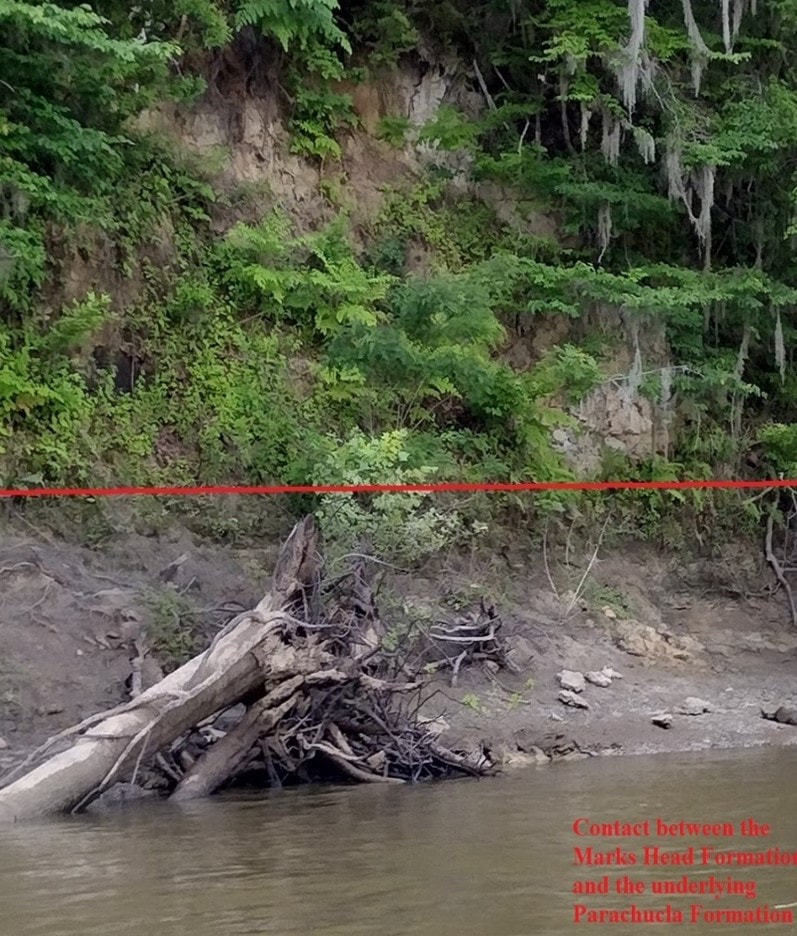 Marks Head Formation at Porters Landing (photo by H. Josey)
​
The Marks Head Formation is something of an oddity.  It shows up in well cores all the way from Effingham County on the Savannah River, south to Valdosta, into northwest Florida, and eastward to the continental shelf; yet outcrops are few and far between.

Its lithology is mostly clay and sand, yet there are layers of dolostone, limestone, and sand, giving it the most variable nature imaginable. It is largely unfossiliferous but has produced lengthy faunal list at certain locations.  On the whole, like much of Georgia’s geology, it refuses to be categorized or easily pinned down.
​
Localities and Lithology
The original type locality (the location where a geologic unit is initially described by researchers) was at Marks Head Run, a deep ravine near Porter’s Landing in Effingham County, Georgia on the Savannah River. That location has long since been overgrown and eroded away.

Paul Huddlestun examined the exposure at Porter’s Landing in October 1974 and described 22 feet of formation. This outcrop too has been largely overgrown, although the author was able to examine it in May 2022. Additional outcrops are present on the Withlacoochee River near Valdosta, on the coast near Brunswick in river dredgings, and at the convergence of the Alapaha and Alapahoochee Rivers near Jennings, Florida.

The outcrops along the Withlacoochee River were previously named the Jumping Gully Formation, but he (Huddlestun) has since confided to the author that these rocks are Marks Head Formation.

He (Huddlestun) referred to the outcrops on the Alapaha River as Unnamed Clay, Sand, and Dolostone in his A Revision of the Lithostratigraphic Units of the Coastal Plain of Georgia:  the Miocene Through Holocene in 1988, but now agrees that those outcrops are Marks Head as well.

As Mr. Paul described to this author in an email:
"When Tom Scott took me to the site sometime in the early 80s, I didn’t think it was Marks Head although he thought so and published it as such in the FGS Bulletin 59. I referred to that outcrop as “unnamed dolostone, clay and sand of the Hawthorne Group in the GGS Bulletin 104-A.  After all the dust settled, I agree now with Tom and consider the outcrop to be Marks Head. The problem with the Marks Head is that every exposure displays a different set of lithologies all based on clay, fine sand, with variable amounts of dolostone or dolomite (from 0 to a lot). The only thing characteristic of the formation is its high content of the high magnesium, fullers earth clays and you don’t need an x-ray diffractometer to determine the presence of these clay minerals; just take a piece of the dry clay and stick it on your tongue, if it sticks to your tongue and you have to pull it off, it’s fullers earth clay (also kitty litter). For myself, I will not predict the lithology for the Marks Head any more at any unknown or new site other than what I’ve said above.  Another weird thing about the Marks Head: it contains no calcareous shelly beds that I’ve encountered, except the type locality in the Marks Head ravine just north of Porters Landing. The type locality exposes a calcareous, shelly sand, nothing else!!  You figure!” – Huddlestun, personal communication, Feb 11, 2018.

According to Mr. Paul, the dominant components of the formation are quartz sand and clay. At varies times, these deposits have been referred to as the Marks Head Marl, the Hawthorne Formation, and the Alum Bluff Formation. Based on planktonic foraminifera, the Marks Head Formation is late early Miocene (Burdigalian) Zone N6 of Blow, approximately 18 million years old.
​
The environment of deposition of the Mark's Head Formation varied from brackish marine at the type locality to shallow open marine continental shelf near the present coast.
​
The Marks Head Formation correlates with the Calvert Formation (Virginia/Maryland), the Kirkwood Formation (Delaware), and the Pungo River Formation (North Carolina).
​ 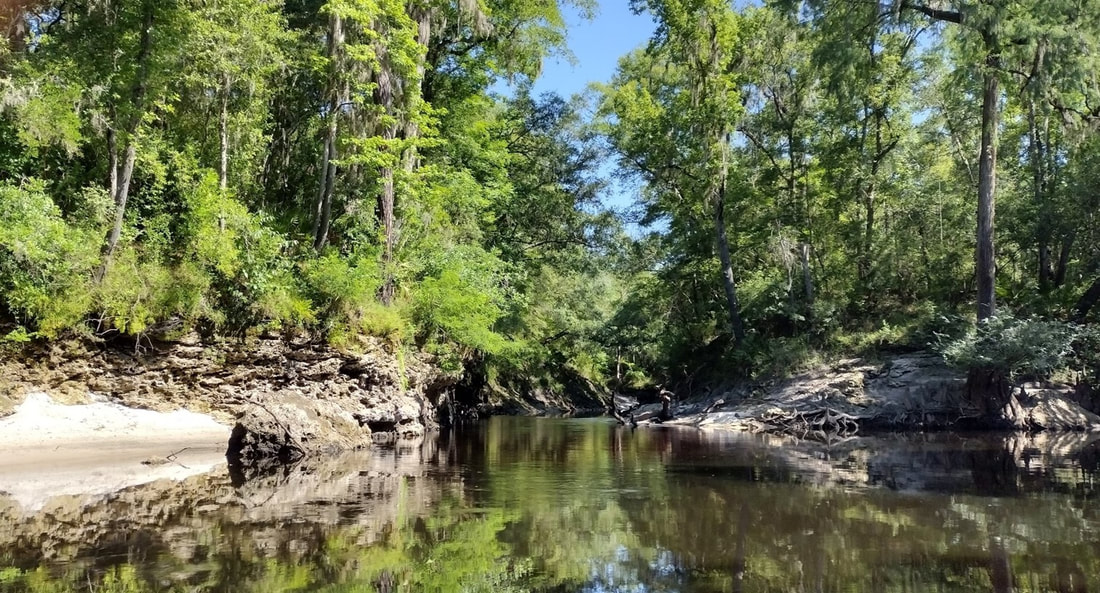 ​Outcrop of Marks Head Formation at the confluence of the Alapaha and Alapahoochee Rivers (photo by H. Josey) 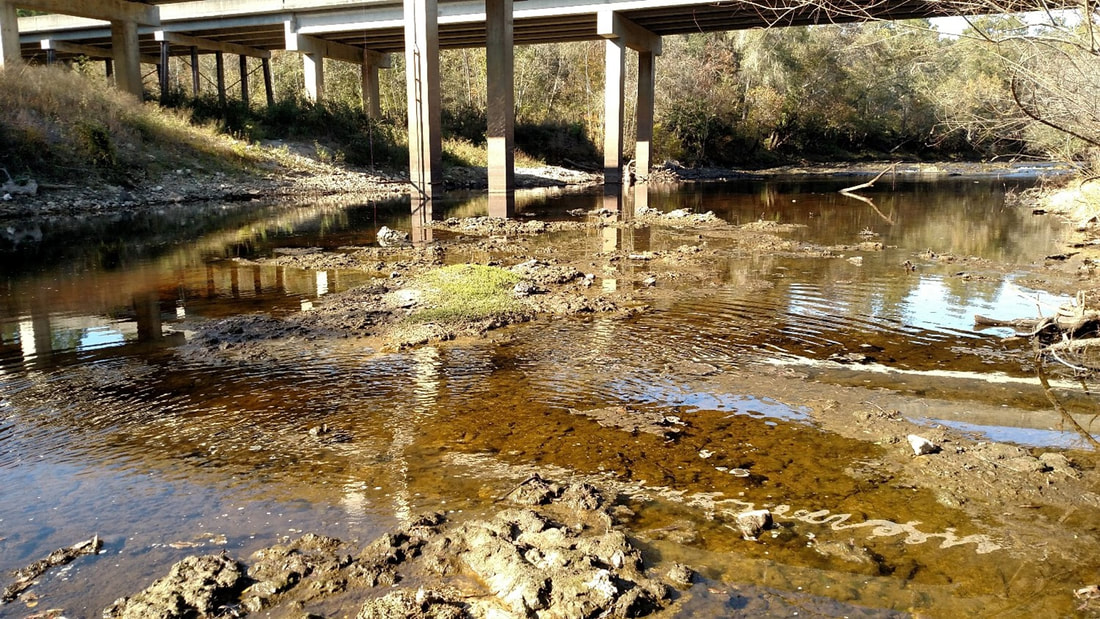 Outcrop of Marks Head Formation at US Hwy 84 bridge near Valdosta (photo by H. Josey)
​


Researchers at Georgia Southern University have extensively studied the Porter’s Landing outcrop for fish fossils and reported the following species:
Carcharhinus spp. (requiem sharks)
Rhizoprionodon terraenovae (sharpnose shark)
Galeocerdo aduncus (extinct tiger shark)
Galeocerdo contortus (longtooth tiger shark)
Negaprion brevirostris (lemon shark)
Hemipristis serra (snaggletooth shark)
Hemipristis curvatus (little snaggletooth shark)
Physogaleus delfortriei (sharpnose shark)
Carcharodon chubutensis (megatooth shark)
Isurus desori (extinct shortfin mako shark)
Carcharias cuspidate (sand tiger shark)
Carcharias acutissima (sand tiger shark)
Alopias latidans (fossil common thresher shark)
Raja sp. (ray)
Myliobatis (eagle ray)
Aetobatus arcuatus (spotted eagle ray)
Rhynchobatus pristinus (ray)
Dasyatis (ray)
Plinthicus stenodon (ray)
Diodontidae (porcupine fish)
Lagodon (pinfish)
Megalops cf. atlantica (Atlantic tarpon)
Sphyraena sp. (barracuda)
Lutjanus sp. (snapper fish)
cf. Pogonias sp. (drum fish)
Testudo (sea turtle)
Isurus oxyrhincus (mako shark)
​
In addition, Chet Kirby has found Marks Head Formation fossils on the (Georgia) coast at Andrews Island near Brunswick. He found shells from the Marks Head Formation in river dredging’s. Paul Huddlestun has studied these shells and according to him, they should not be there. An article in the Brunswick News reports:
Kirby has developed a stellar reputation for his work. In fact, that was the reason Paul Huddlestun, paid a visit to Kirby Monday. He was on hand to take a look at some of Kirby’s most intriguing finds, some that could date between 4 million and 16 million years old… He was on hand to study a sample of shells, Vasum Chipolense, that were found after dredging took place in the South Brunswick River in 2003. The specimens were deposited on Andrews Island. The problem was the fossils were much older than similar fossils and sediment found nearby. Something had either displaced very old materials or these shells simply were not that old. “This is what the debate is right now ... the age of these fossils. It is either four, or if it is Charlton layer, they are the first specimens. If it is a Marks Head, it’s the first specimens of a Marks Head,” Kirby explained.… And while Huddlestun studied the samples, even conversing with colleagues at the University of Spartanburg at South Carolina and the University of Florida by phone, he remained puzzled. It was the fact that Kirby found the fossils in a place they do not necessarily belong. The layering of sentiment is key because it normally dictates the age of a fossil. But, in this case, all bets are off.  “I came here expecting to have an answer but they’ve kind of thrown a monkey wrench it that,” he said, scanning the fossils yet again.  “We do that a lot,” Chester Kirby said with a laugh.  “But we don’t mean to,” his father added with a chuckle.  Huddlestun was stumped primarily because the age of the fossils does not sync up with the layering in which they were found. But he believes that a sediment reef or fault line shift could be the reason.  “Chet said he found Marks Head and I scratch my head because it ought not be here ... it should be about 300 feet down,” Huddlestun said. “But talking to Robert Campbell, the paleontologist, on the phone ... he assures me that the stuff is there. So, it would be about 15 or 16 million years old.”
​
​Once again, the Marks Head Formation refuses to give up its answers easily.
​ 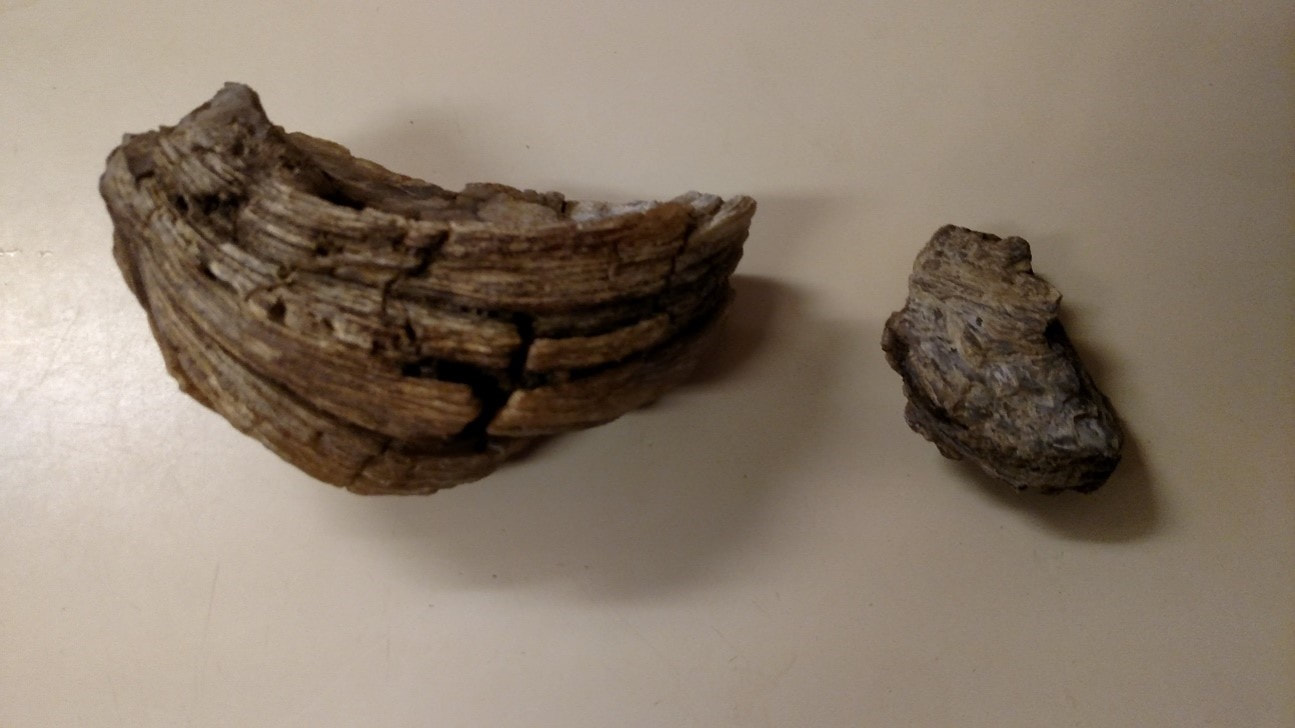 Crassostrea normalis found on the Withlacoochee River by the author (photo by H. Josey)
​ 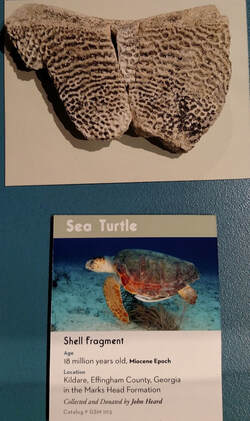 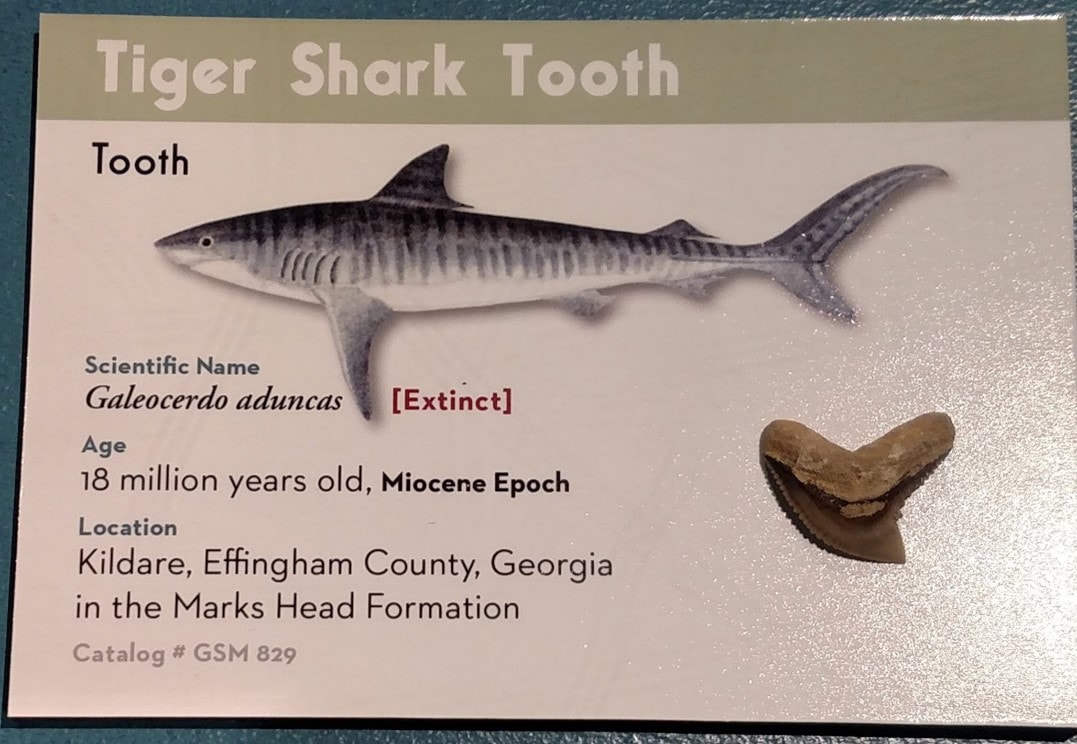 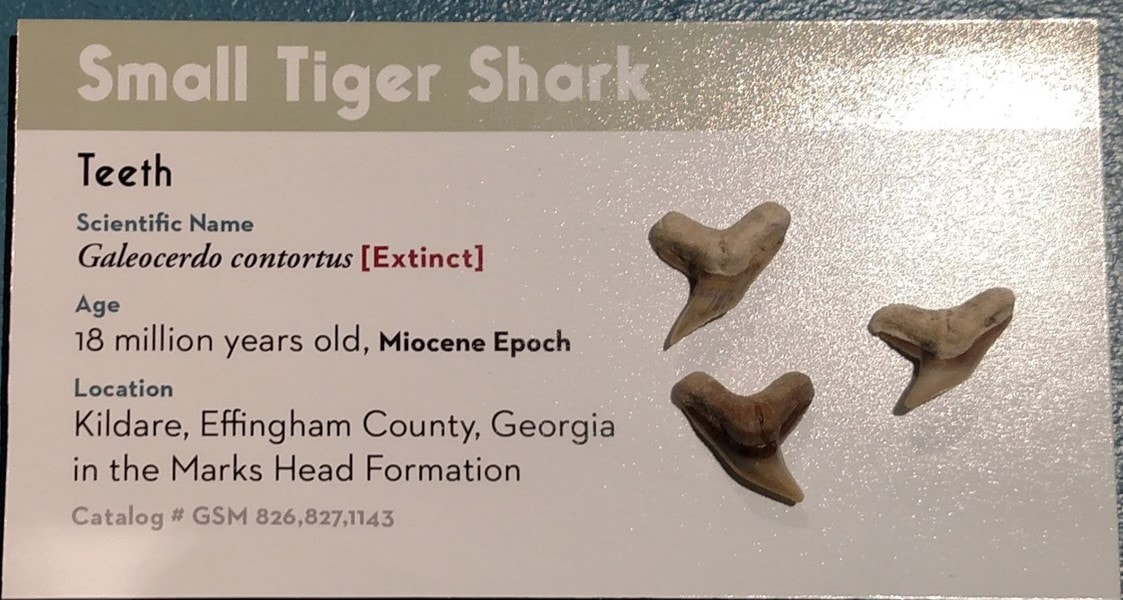 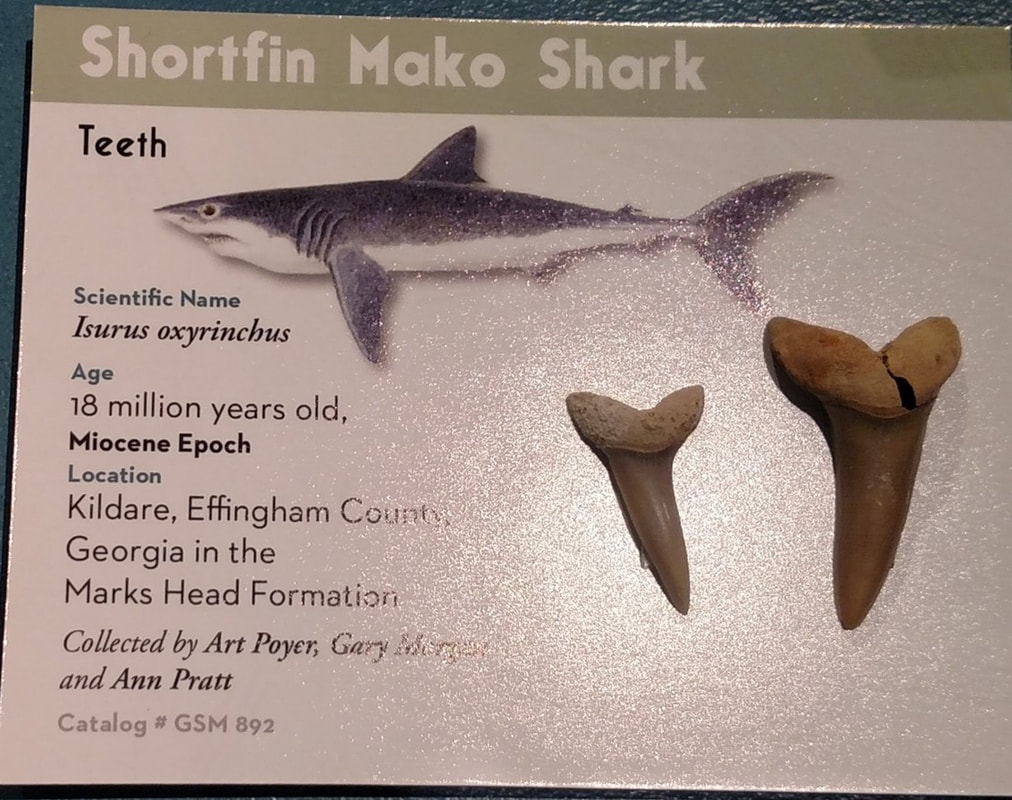 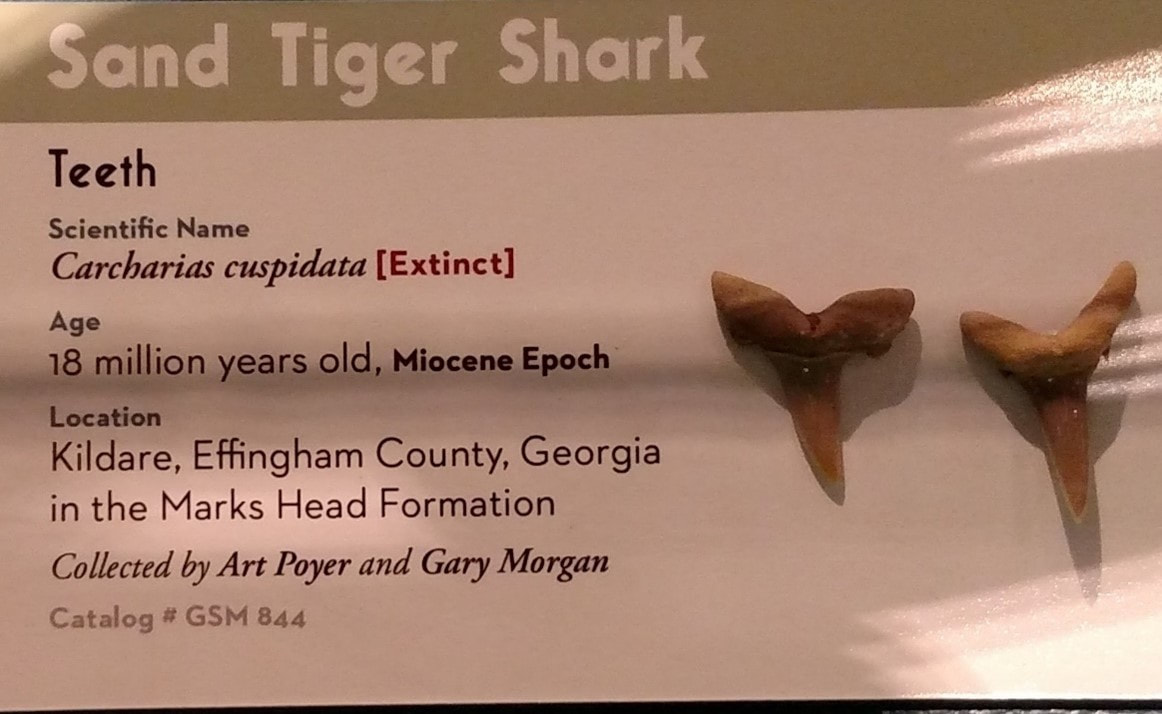 Cooke, C. W. 1943. Geology of the Coastal Plain of Georgia. US Geologic Survey.

Huddlestun, P. F. 1988. A Revision of the Lithostratigraphic Units of the Coastal Plain of
Georgia:  the Miocene Through Holocene. Georgia Geologic Survey.