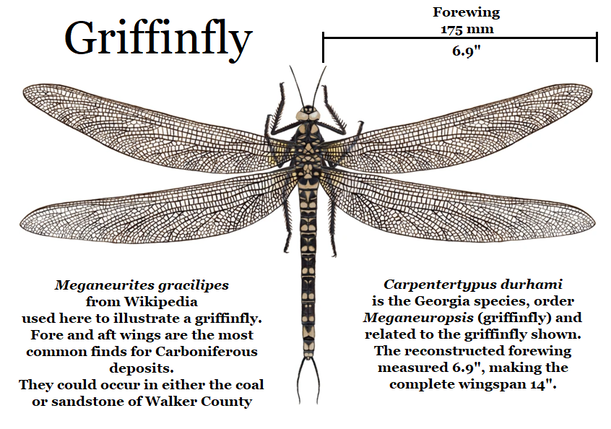 ​
In my mind, any insect with a 14-inch wingspan rates as a giant. ​
​One such giant flew, long ago, in Georgia’s Walker County. The fossil is known from the 315-million-year-old Walden Sandstone.
​ 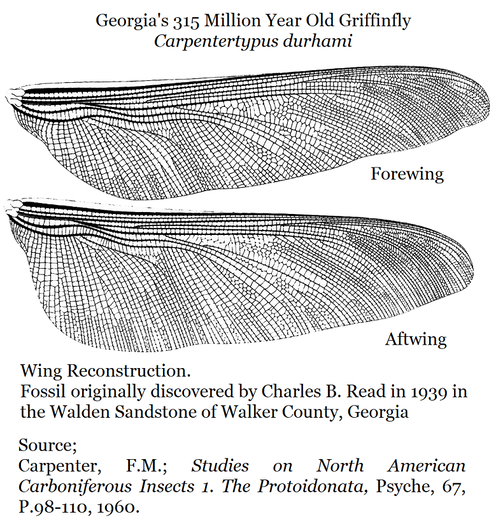 This is the only scientifically reported insect fossil from Georgia. There should be more in Walker County, there is no reason to think this is an unusual find beyond the fact that no one is looking. A fact I attribute to no one being aware that insect fossils are out there.

Alabama, the only other Southeastern state to report an insect fossil, has several scientifically documented finds from sediments of the general same age, some of the reports are very recent, some date back to the early 1900s.
​ 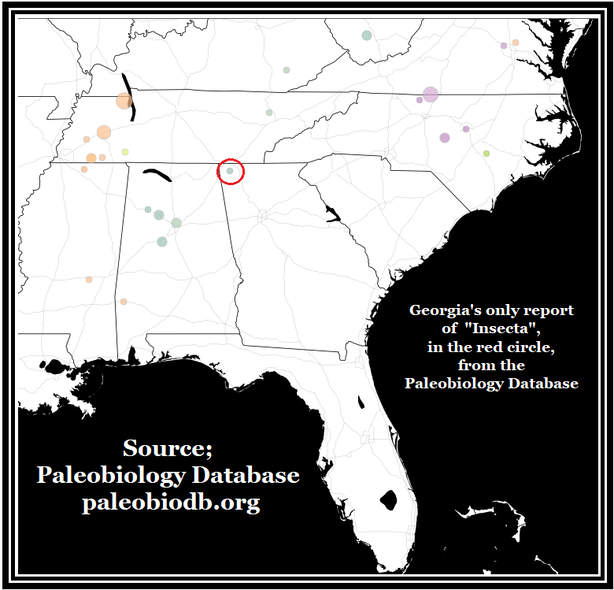 This Georgia fossil established a previously unknown species, Carpentertypus durhami of the order Meganeuropsis (griffinfly). The specimen is held at the U. S. National Museum of Natural History in Washington DC (The Smithsonian) as specimen# PAL 141195. It was originally collected by Charles B. Read in 1939 and scientifically described in 1960 by Frank M. Carpenter. Carpenter named it Typus durhami. It’s still recorded as such in the Smithsonian’s records, but it has been reassigned as Carpentertypus durhami.
​
Insects ruled the sky at this point in Earth’s history. Nothing else had evolved flight, so the only predators threatening a flying insect, was another flying insect. The Georgia griffinfly was a predator.
​ 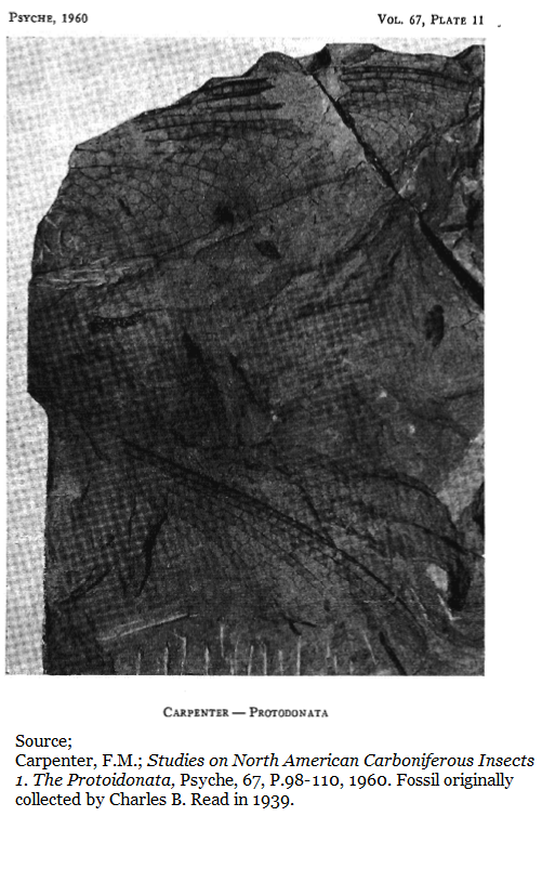 The find was two partial wings on a single sandstone slab of plant fossils from Walker County in northwest Georgia. The estimated length of a single, complete forewing is 175mm or 6.9 inches. Two forewings separated by a bit of body means a 14-inch span of the forewings. 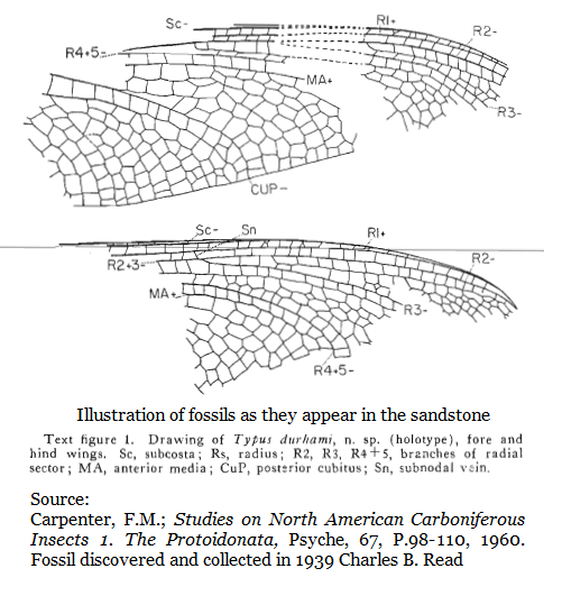 A quick nod of thanks to the NSF (National Science Foundation) for funding Carpenter’s 1960 research.

Another nod for the Paleontology Association of Georgia for posting this paper on their website. I was previously unaware of insects confirmed in Georgia’s fossil record.
​
Northwest Georgia Coal & Sandstone
I won’t describe the coal and sandstone beds here beyond their application to insects. Hank Josey gives an excellent description in Section #5A of this website, Georgia’s Pennsylvanian Plant Fossils.

In May of 1939 Charles Read collected fossiliferous sandstone from the Williams Coal Company Mine #4. Among the wealth of plant fossils, there was a preserved insect wing.
​​That really shouldn’t surprise us. As Hank Josey explains in section 5A; “Alternating periods of high and low sea levels formed layers of sandstone and shale containing beds of coal, a result of the proliferation of land plants during this time.” At about this same time the first large-scale radiation of insect occurred.

Most of Earth’s coal was formed during the Carboniferous Period, 359 to 299 million years ago, when vast, dense forest stood. All these plants meant Earth’s atmosphere was richer in oxygen and this allowed larger insects. Insects also proliferated at the time. For mechanical reasons, the size of insects is somewhat limited by the oxygen content in the atmosphere.
​ 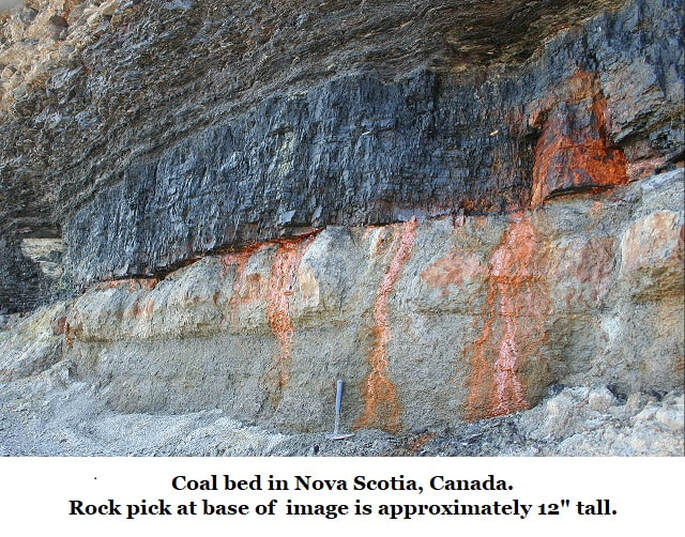 It all has to do with the joints in an insect’s exoskeleton. Circulatory fluid must flow to carry oxygen to muscles, though this is very different in arthropods than vertebrates it is nevertheless true. The joint of an exoskeleton is a very constricted passage. Muscles, tissue, and the circulatory system must pass through it. Therefore, a richer the oxygen content in the atmosphere means more oxygen is circulated through the same orifice and insect, this supplies more energy and allows larger insects. Less oxygen in the atmosphere restricts the size of insects.
​
There were few wood eating microbes at this time. Staggering amounts of plant matter slowly became peat, and eventually coal. The conversion of dead plant matter into coal is called coalification. Therefore, plant fossils are always preserved in coal. And in a time when giant insects lived in an oxygen rich atmosphere, it only stands to reason that insect fossils are persevered, from time to time, with the coal.
​
Coal has commercial value because it burns and is a convenient, energy rich fuel. It is the original, Fossil Fuel. However, the carbon held in the coal does not burn, and is released as the coal is burned. The release of carbon into the atmosphere is one of the driving forces in global warming. This is why coal, by its nature, is a dirty fuel.

Durham, Georgia is an unincorporated community in Walker County, up in the northwest corner of Georgia. Wikipedia reports that Durham’s original name was Pittsburg, but it was later named after Durham Coal and Coke Company. There was a Pittsburg Post Office from 1900 to 1946. But today it’s Durham.
​
The Rise & Radiation of Insects
Insect fossils are known to the lower Devonian Period, 400 million years ago. Winged insects underwent a major radiation during the Carboniferous Period so our Carpentertypus durhami was part of that radiation. The Permian-Triassic mass extinction at 251.9 million years ago ended many insect species. Most modern insect orders rose in the Triassic after the extinction event and have endured until today.

Historically insect evolution has been characterized by rapid adaptation and this persist today. The emergence and radiation of flowering plants deeply influenced insect evolution, and insect evolution has also influenced the evolution and radiation of many plants.
​
Insects in Coal (adapted from Wikipedia)
The remains of insects are scattered throughout Carboniferous coal deposits, particularly of wings from early roaches (Blattoptera) which likely fed on decaying wood. Illinois has the 309-million-year-old Mazon Creek ironstone fossil beds which produces roachoids. 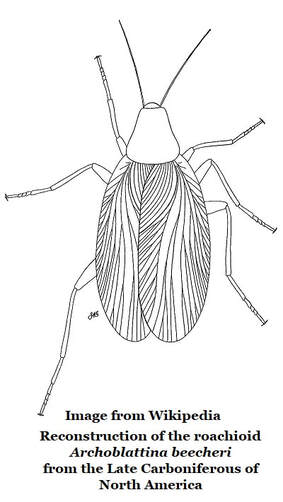 ​There are also other primitive winged insects are from this time period including Ephemeropterans (mayflies), Orthoptera (grasshoppers, locust, & crickets), Palaeodictyopteroidea (extinct beaked insects). In 1940 (in Noble County, Oklahoma), a fossil wing of Meganeuropsis americana was recovered from Noble County, Oklahoma which represented the largest complete insect wing ever found.

At less than 300 million years old, Meganeuropsis americana from Oklahoma is younger than the Georgia find. It was still a fairly close relative to our Carpentertypus durhami. M. americana possessed 12” forewings compared to C. durhami’s 7.5” forewing.

Our 315-million-year-old C. durhami is older than any of these finds. 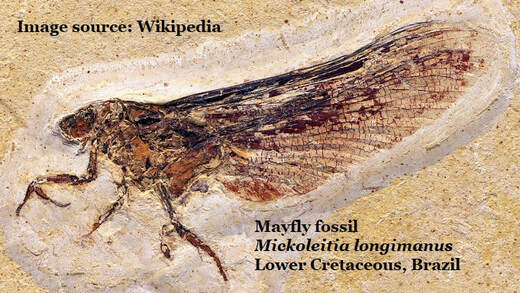 Preservation…
The 1960 paper reporting the Georgia find is by Frank M. Carpenter of Harvard University. He was an American entomologist and paleontologist who earned his PhD at Harvard and went on to be curator of fossil insects at the Harvard Museum of Comparative Zoology for 60 years. Carpenter passed in 1994.

Sadly, the PDF photograph we have of the fossil is not so good, apparently the original print was better.

About the Georgia fossil Carpenter’s paper reported…
“As can be seen from the photograph (Plate I I ) , the specimen consists of the apical portions of the fore and hind wings; although the remainder of the insect, which was presumably originally preserved, is broken away, the preserved portions are very clear.”

So if you have sandstone or coal samples from Walker County, take a second look and make sure noting was overlooked. If you think you might have an insect in the fossil, contact me; Thomas Thurman.