Veatch and Stephenson reported the following Eocene Epoch observations over vertebrate and plant fossils. Bear in mind that many of the sediments reported in 1911 have been reassigned to new formation names and often their ages have been reassessed. As always, I invited readers to submit information on local fossils.
Griffins Landing (1911 report)
Shells of the large oyster, Ostrea georgianna (reassigned as Crassostrea gigantissima) from which Shell Bull (see below) received its name, are conspicuous from 80 to 100 feet above the river level. The shells are unusually long and narrow, having a length of 12" to 1 5" and a
width of 3" to 4"; the valves are thick, often two inches. Very large specimens may have a length of 22 inches. Many specimens of the young are curved or sub-oval in shape. As pointed out by
Dall, this species is characterized by "low, flattish, distally forked radial riblets..." Veatch & Stephenson; 1911

On 10/Sept/2016 Hank Josey took me to Griffin's Landing at Yuchi Wildlife Management Area, Griffins Landing, Burke County, GA. This is along the banks of the lovely Savannah River. About three miles east-southeast of  Nuclear Power Plant Vogtle. Where Georgiacetus was found; see Section #10 of this website.

As a reminder of the power plant, radiation sensor towers are scattered about the landscape.

Griffins Landing is more than a century old but is unusable today. There is a concrete boat landing, but due to GA Department of Natural Resources budget cuts the access road to the landing is badly overgrown, washed out in places, and in need of repair.

From the rarely used parking area, it is an easy hike of maybe half a mile, gently downhill as a series of terraces to the river. These terraces are noticed while hiking back up.

At the river you'll see why this site is famous for beds of the giant oyster Crassostrea gigantissima. These are about 34 million years old. This same species was collected just a few miles North of this site by William Bartram in 1765 at Shell Bluff (see below).

The Savannah River was beautiful at that day; quiet & lazy. It was wonderfully cool for most of our time on site and just sitting on the riverbank shell-debris was delightful.
​
Hiking back out, it got hot. But a big female Nephila (?) golden orb-weaver spider made for interesting wildlife.

The bluff itself stands about 80-100 feet above the river level, just north of the nuclear power Plant Vogtle. Historically John Bartram, father of the famous William Bartram and described by one contemporary scholar as “The father of American botany” and by another as “the greatest natural botanist in the world” visited the site in 1765.

Sir Charles Lyell, the father of modern geology and a friend of Charles Darwin, collected here in 1846. What they were after was the giant oyster Crassostrea gigantissima (Finch 1824) formerly known as: Ostrea Georgiana. 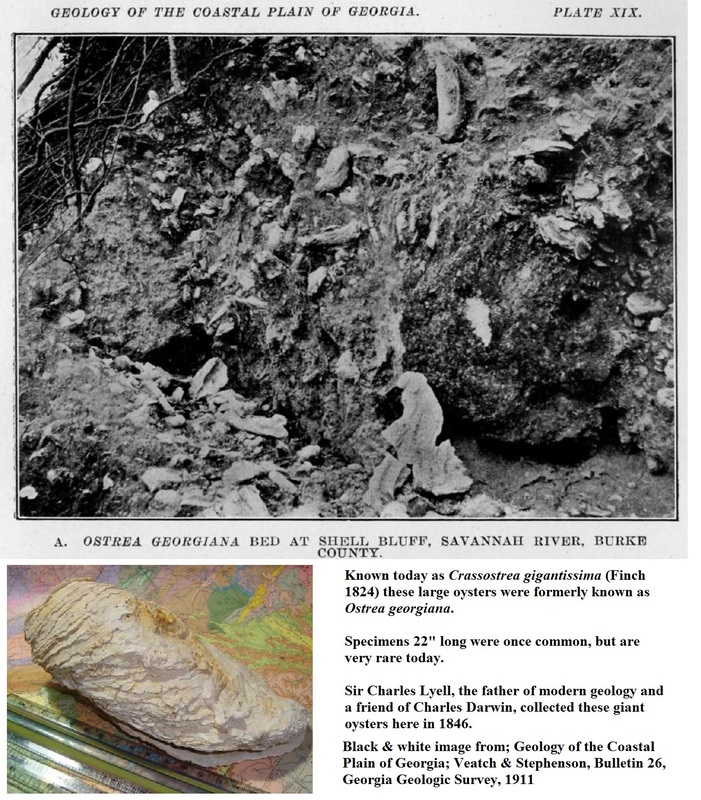 Sandersville, Washington County
Professor S. W. McCallie, (Georgia State Geologist during the 1911 time of study) reported vertebrate and plant fossils in sediments under Rocky Branch bridge about 2 miles northwest of Sandersville; the site may be extinct. It would be interesting to hear any fresh reports from readers.


I had no luck with the name Rocky Branch or a bridge near this location. However, Linton Road follows this route and crosses Carters Mill Creek at a point about 2 miles northwest of Sandersville. The stream crossing is nearly hidden as the suspected “bridge” is now a culvert and the road crosses unchanged in appearance along this length. The reported finds were shark’s teeth, bone fragments and plants.

As a note; Sandersville is well known for fossils, as well as kaolin production. Vertebrate and invertebrate fossils have been found in several locations, including the same species of giant oyster, Crassostrea gigantissima, known from Shell Bluff.


Louisville, Jefferson County
In 1911 Warren’s Mill stood at a location 3 miles east of Louisville, a dam was built to power the mill. This would probably be in the area of modern Kelly’s Pond. This area is reported to be overlain by fullers earth (an old term for the Upper Eocene Twiggs Clay formation), Veatch & Stephenson report “…which in places is rich in animal remains….shells, teeth bone etc. The surface formation is red sand.”

Eight miles southeast of Davisboro shark’s teeth with fragments of shells are reported in white, sandy claystone (probably the Clinchfield Formation) exposed to the water’s edge. The author assumed that this is either Lewis Lake or the creek feeding the lake. (7)

The location 1.5 miles southwest is reported as Phillip’s Falls where a 5 layer section of stratigraphy occurs. The top section is described as red sand at 10ft thick. Beneath this the second section is a Bluish-gray laminated fuller earth (Twiggs Clay?) containing fragments of plant remains at 30 ft thick. The third layer is reported as sandy clay bedding about 3 feet thick where fragments of plant remains can be found. The next layer at 10 ft thick is a blue to gray clay with no reported fossils and the lowest 5th layer is sand at 10 ft thick.

The location 1.5 miles east of Harlem is reported as the plant (quarry?) for the Georgia Vitrified Brick and Clay Company. Six layers of stratigraphy are reported. The uppermost is a 25 ft thick bed of red and yellow iron rich sand covered with a thin veneer of gray sand. The second bed is 8 ft thick, pebbly yellow sand containing of silicified wood. Next they report a 5 ft section of white and yellow sandy clay, beneath this is a 7ft section of white, sandy clay containing bits of carbonized leaves and wood. Under this is a 4ft section of black carbonized clay.

Griswoldville, Jones County
Prof. G.D. Harris made the following (edited) report to Veatch and Stephenson in 1911:

“About a year ago… we collected at some fine fossiliferous localities in the vicinity of Griswold (ville) and heard of others in the same general vicinity but had no time to inspect them. The outcrop is a V-shaped valley about 2 miles south of Griswold (ville), or about 10 miles east of Macon. The lower rock consists of a hard bed of typical buhrstone (a hard siliceous rock used to make grindstones or millstones)…about 10 feet in thickness, replete with fossil remains. In less indurated (less hard) or sandy seams and just below the main bed many fine specimens of silicified shells were collected in calcareous sands (sands composed of calcium material like sea shells and organic debris). Sandy beds were noted below the mentioned hard bed for a distance of 40 feet.”


Bibb County
Veatch & Stephenson report that along the Macon-Marion Road 10 miles southeast of Macon near the Bibb/Twiggs County line, plant remains are found in the Twiggs Clay.

After Highway 87 (the Cochran Short Route) crosses I-16, runs southeast away from Macon paralleling I-16. About 1.25 to 1.5 miles past the I-16 intersection Old Marion Road forks off of highway 87 to the left.

The 1911 report states that Prof. McCallie (State Geologist from 1908 to 1933) recorded the Twiggs Clay (known as the Conagree Clay in 1911) occurring in gullies along both sides of the Macon-Marion road and contains plant remains.

This is now the Old Marion Road. Highway I-16 did not exist at the time of this report. A look at Google Earth confirms the presence of gullies which would be worth investigating.


Later research conducted by Dr. Voorhies, produced entelodont fossils from the Twiggs Clay a few miles from this location.

The stratigraphic report, re-written with modern terminology, is below. The researchers recorded seven beds of stratigraphy with a total thickness of 88 feet.

Rich Hill, Crawford County
Rich Hill stands about 5 miles southeast of Roberta, Georgia. To quote Veatch and Stephenson; “The hill rises about 150 feet above the small valley on the south side, and is a conspicuous topographical feature.” It continues: “The hill is capped by brilliant red sand, probably referable to the Jackson formation (obsolete term referring to Late Eocene sediments) the latter rests upon white clays and sands of the Lower Cretaceous.

The hill is deeply trenched by erosion gullies in which the strata are laid bare.”

Reported; Fish teeth (other sources report shark’s teeth, no specie information is given) found in the limestone, “abundant” in places. The limestone is describe as full of bryozoans and is often soft enough to crumble with hand pressure; in other places at the site it is harder. (This formation is currently called the Tivola Limestone and occurs in abundance between Perry & Elko though it is not so well known for shark’s teeth in Houston County.)


Though not reported here because the researchers were unaware of it, there is sand (Clinchfield Formation) underlying the limestone which is known for fossils. This site is currently a hunting club and unavailable for collecting or observations, that said the author strongly suspected that the “abundant” shark’s teeth are probably contained in the Clinchfield Formation, which has limestone layers in some locations.

Reported: Basilosaurus fossils, which is an early whale with distinctive fossils easily identified in the field.) (7)

“Tivola Station is no longer in existence, but its original location was approximately at the crossing of an unimproved road and the Southern Railway tracks 0.1 mile southeast of Pabst Brewery (Now a Perdue plant) 1.7 miles north of Clinchfield."

Veatch & Stephenson report that a good section of the (Eocene) formation is exposed at the old quarry on the east side of the Georgia Southern & Florida Railroad, 1.33 miles south of Tivola. Today this is known as the Tivola Limestone, so even if the community and train station are long gone the name is remembered. Active mining is still conducted here, though even in 1911 the quarry was considered “old”. The limestone deposit was extensive.